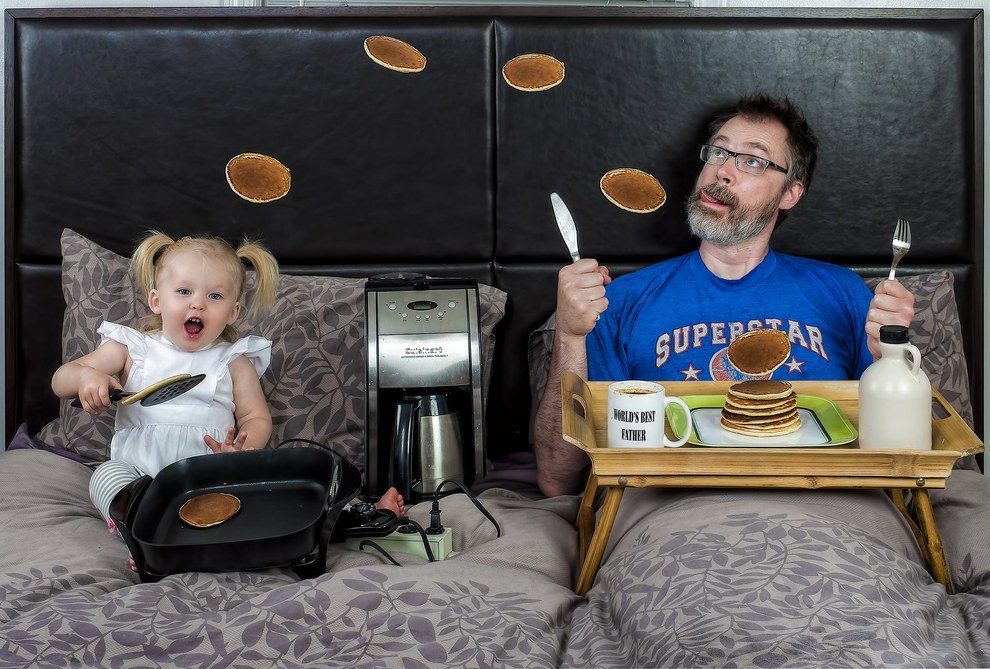 HE’S BACK WITH A NEW BOOK AND A HANDFUL OF INCREDIBLE NEW PICTURES OF HIM AND HIS 3-YEAR-OLD, ALICE BEE. 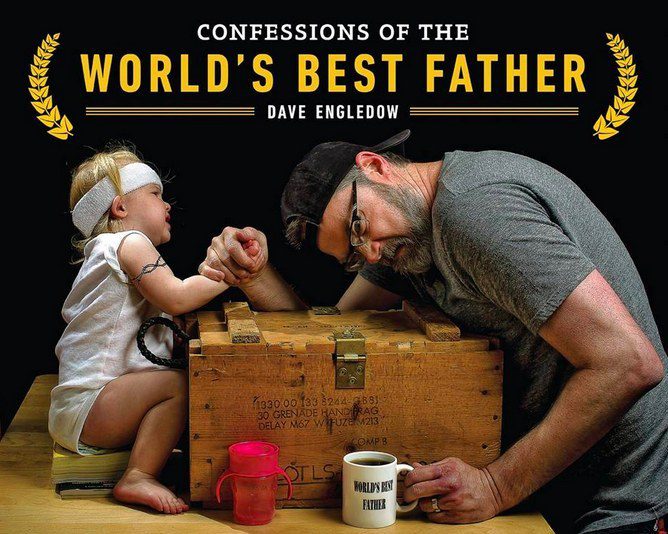 AND HIS PORTRAITS OF FAMILY LIFE ARE JUST AS AMAZING AS EVER. 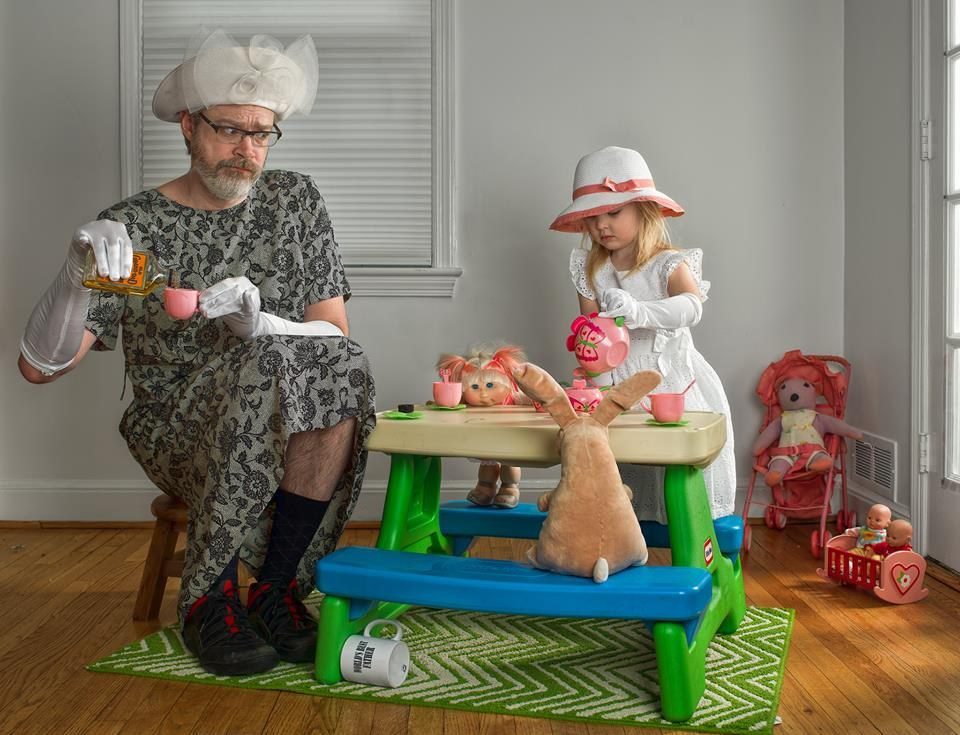 THE 43-YEAR-OLD MARRIED DAD HAS BEEN CAPTURING LIFE WITH ALICE SINCE SHE WAS ABOUT 6 WEEKS OLD, STARTING WITH THIS PHOTO. 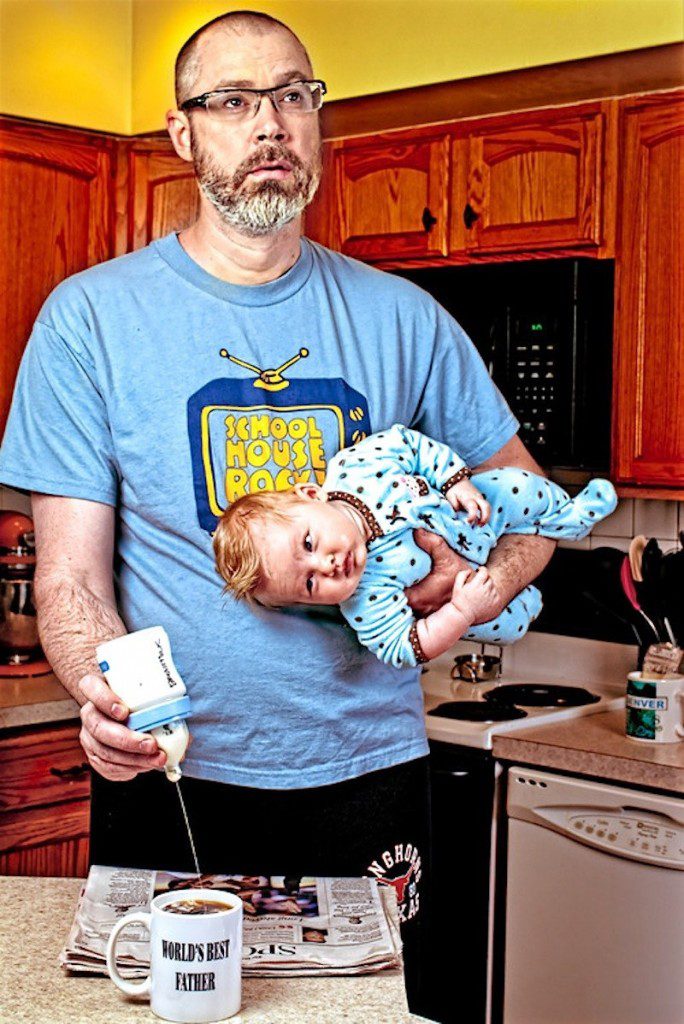 “When I first started, the idea was that I just kind of wanted to make fun of myself because I was feeling incredibly exhausted and sleep-deprived,” Engledow told BuzzFeed, “so I wanted to capture just how clueless and sleepy I felt.”

THIS WAS ANOTHER EARLY FAVORITE, INSPIRED BY ENGLEDOW’S “DEATHLY” FEAR THAT HE WOULD LEAVE ALICE’S CAR SEAT ON TOP OF THE CAR. 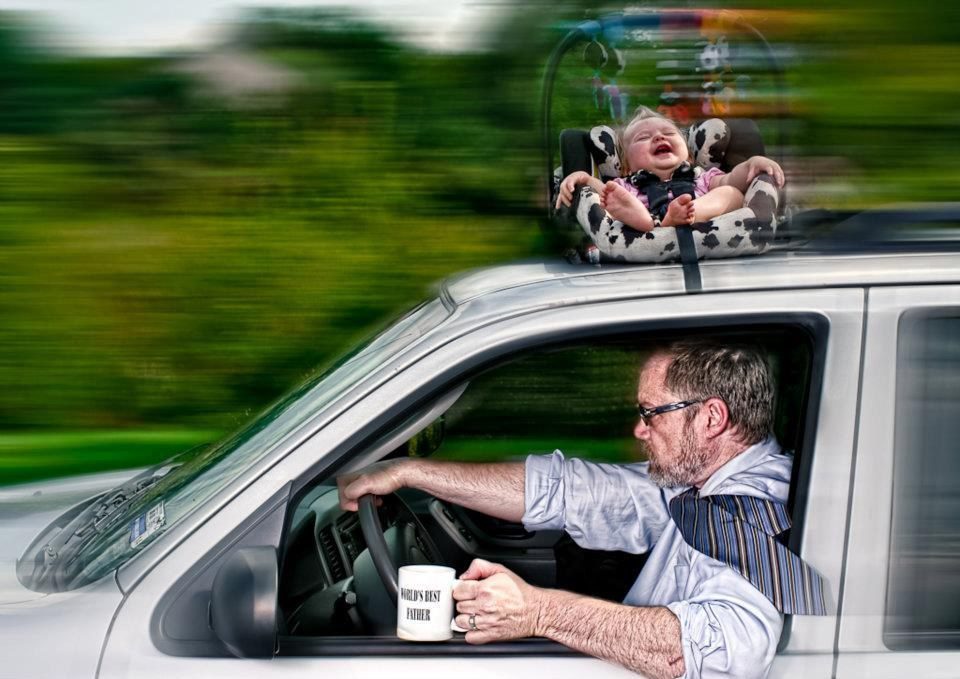 “I think early on in the series a lot of the photos were me kind of playing out things that I was afraid of as a father,” he said.

ENGLEDOW SAID HE OFTEN SHOOTS HIS AND ALICE’S PARTS SEPARATELY, THEN EDITS THE PICTURES TOGETHER. SHOOTING THE PHOTOS CAN TAKE AN HOUR OR TWO, BUT EDITING TAKES ANYWHERE FROM FIVE TO 20 HOURS. “Sometimes she’s into it, sometimes we have to offer some serious bribes to get her to participate,” he said. “It’s kind of a thing that she and I do together and sometimes it’s fun for her, and sometimes she would rather be doing anything else but that.”

ALICE’S BRIBES INCLUDE THINGS LIKE FRUIT SNACKS AND POPSICLES, OR, IF THEY NEED TO “BREAK OUT THE BIG GUNS,” CHOCOLATE. 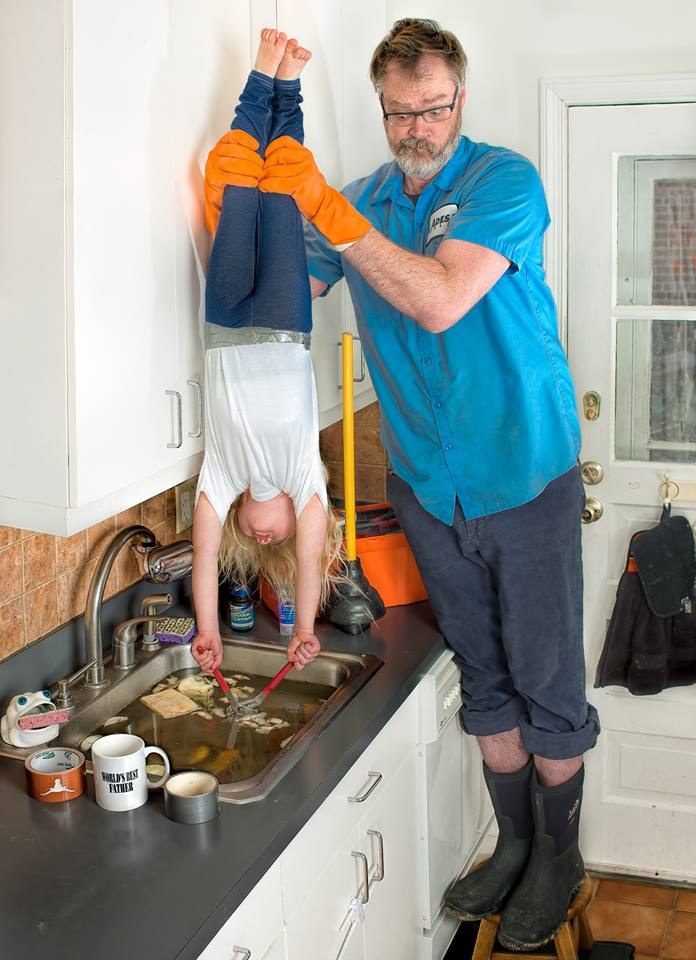 THOUGH HE STARTED OFF JUST POSTING THE PICTURES TO ENTERTAIN HIS FAMILY AND FRIENDS ON FACEBOOK, ENGLEDOW RAMPED UP HIS PHOTOGRAPHY WHEN SOME FRIENDS SAID THEY’D BUY A CALENDAR FULL OF PHOTOS OF HIM AND ALICE. 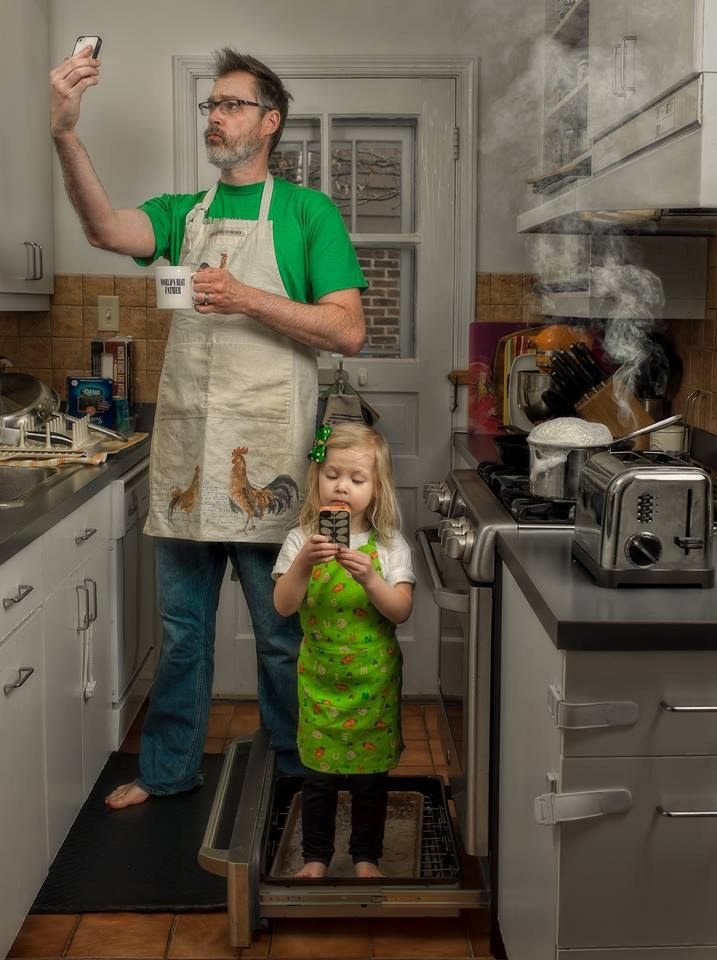 A YEAR LATER, AFTER CREATING A KICKSTARTER FOR HIS SECOND CALENDAR, THE CAMPAIGN — AND HIS PHOTOS — TOOK OFF WHEN IT WAS CHOSEN AS ONE OF THE SITE’S STAFF PICKS. 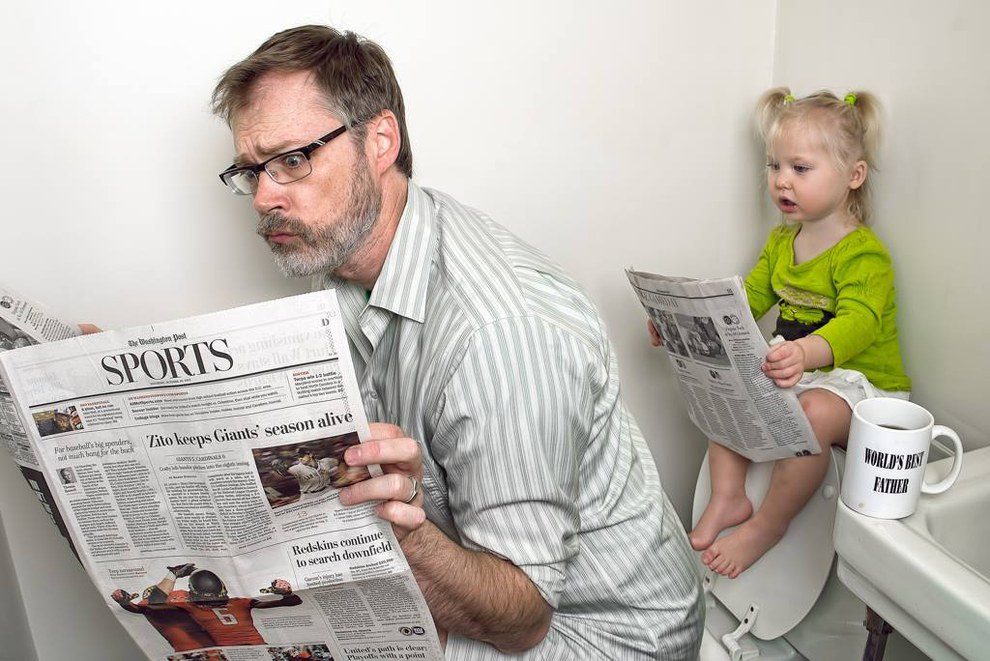 THOUGH ENGLEDOW DOESN’T WORK AS A PHOTOGRAPHER FULL-TIME — HE’S DEPUTY DIRECTOR AT THE NONPROFIT WORKING AMERICA — HE RECEIVED A PHOTOJOURNALISM DEGREE FROM THE UNIVERSITY OF TEXAS. “Having a full-time job allows me to shoot whatever I want. I have the freedom to just photograph the things I’m interested in. And right now, obviously, that’s taking pictures of our family and Alice.”

HE ALSO HAS THE SUPPORT OF HIS WIFE, JEN, WHO HELPS BEHIND THE SCENES AND KEEPS ALICE “HAPPY AND WELL-FED” DURING THE PHOTO SHOOTS, EVEN SOMETIMES APPEARING IN THEM HERSELF. “Now that Alice is a little bit older, she keeps asking to have mommy in the pictures as well,” Engledow said, “so we’ve trying to get Jen to get in front of the camera a bit more in recent months.”

THE TAKOMA PARK, MD., RESIDENT SAID HE FINDS LOTS OF INSPIRATION FROM POP CULTURE, LIKE WITH THIS BREAKING BAD-THEMED PHOTO OF THEM MAKING ROCK CANDY, AND FROM ALICE’S LIFE MILESTONES, OR JUST THINGS THAT EXCITE HER (LIKE THROWING THINGS IN THE TOILET). AS FOR HOW LONG THEY’LL KEEP DOING IT, ENGLEDOW SAID HIS LITTLE GIRL WILL BE THE DECIDING FACTOR. 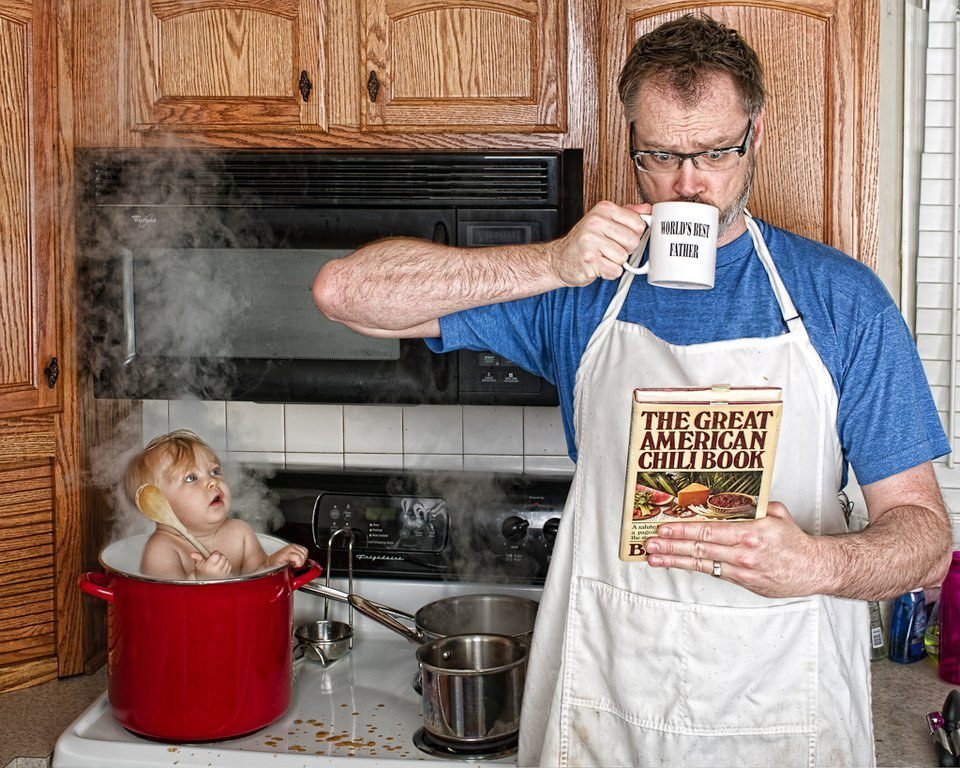 “I DON’T WANT TO BE ONE OF THOSE PARENTS THAT PUSHES THEIR KIDS TO DO WHAT I WANT THEM TO DO. IF AT ANY POINT SHE SAYS, ‘I DON’T WANT TO DO THIS ANYMORE, DADDY,’ I THINK WE’D RESPECT THAT.” EVENTUALLY, ENGLEDOW SAID HE’D LIKE FOR HIS DAUGHTER TO HELP HIM COME UP WITH IDEAS FOR THE SERIES. “My hope is that as she gets a little bit older, she and I will start coming up with ideas together, and that we’ll kind of be partners in the project,” he said.

THOUGH IT’S BEEN THREE YEARS, ENGLEDOW SAID ALICE STILL GETS EXCITED TO SEE THE PHOTOS, BUT IS STILL TOO YOUNG TO REALIZE THEIR INTERNET FAME IS OUT OF THE ORDINARY. If you laughed as much we did, please share these with others parents!