The love affair between Kanye West and Donald Trump intensified on Wednesday evening as the rapper traded adoring messages with the President, showed off his MAGA hat and criticized Obama – despite Kim Kardashian’s attempts to step in.

The rapper proclaimed that the mob ‘can’t make me not love’ Trump and praised the President’s ‘dragon energy’.

‘You don’t have to agree with trump but the mob can’t make me not love him,’ he wrote.

‘We are both dragon energy. He is my brother. I love everyone. I don’t agree with everything anyone does. That’s what makes us individuals.’

He later revealed that his MAGA hat is signed by the President himself, posting a picture of the accessory, which itself prompted another reply from Trump which simply read: ‘MAGA!’

Later on Wednesday evening, West turned his attention to former president Barack Obama, tweeting: ‘Obama was in office for eight years and nothing in Chicago changed.’ However, he declared his respect for Hillary Clinton, writing ‘I love Hillary too’. 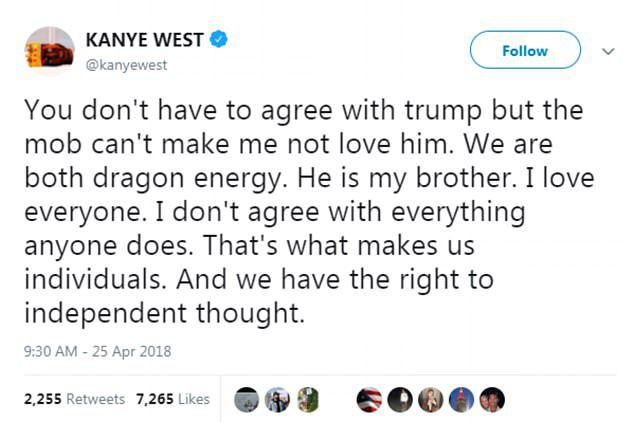 Kanye West has once again declared his support for Donald Trump, calling the president his ‘brother’ and saying they both share ‘dragon energy’. He tweeted this around 9.30am PST 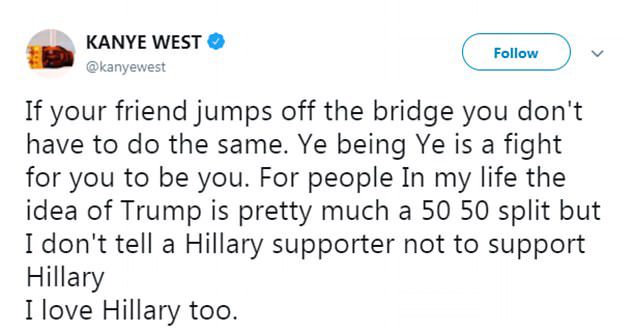 In his next tweet posted just a minute after, Kanye wrote that he loved also Clinton and claimed that ‘Trump is pretty much a 50 50 split’ for the people in his life 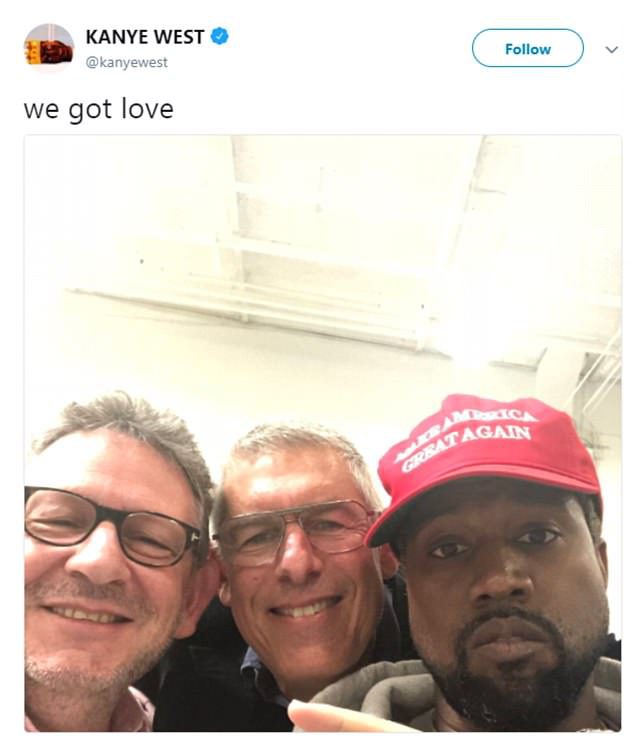 Trump later retweeted the message on his page and wrote: ‘Thank you Kanye, very cool!’ 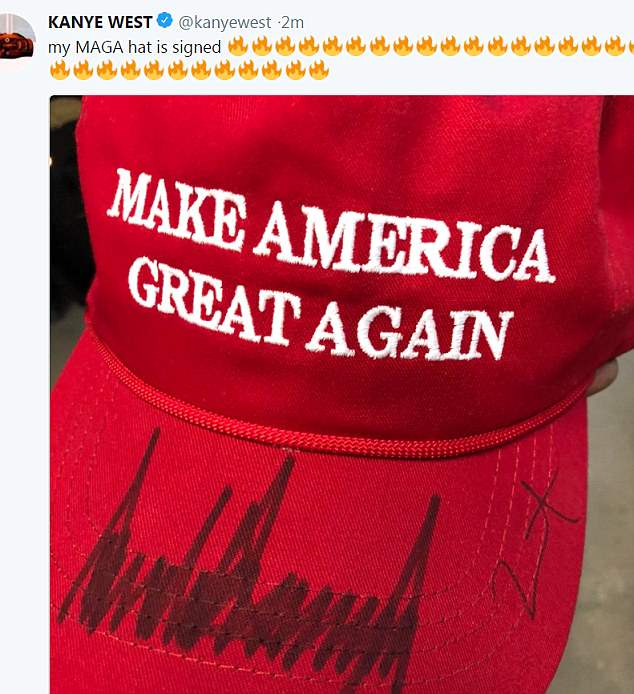 Around 12.30pm PST West posted a picture of his MAGA hat to show that it had been signed by Trump himself

The president then tweeted the photo of the hat with ‘MAGA!’

This evening Kanye turned his attention to the former president, tweeting, ‘Obama was in office for eight years and nothing in Chicago changed’ 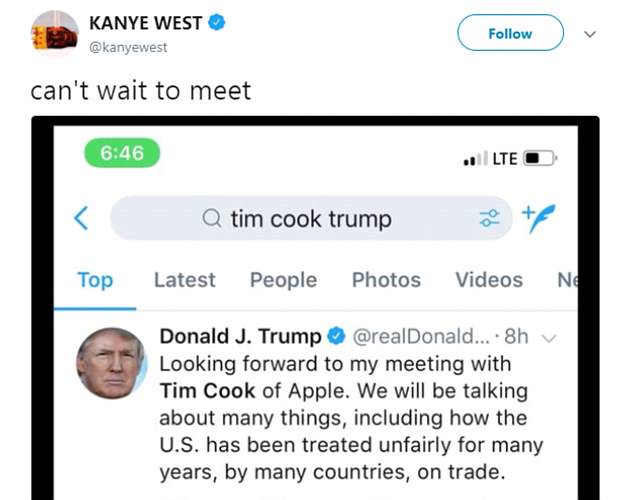 He then retweeted a post in which President Trump was expressing his excitement about meeting Apple CEO Tim Cook with the caption, ‘Can’t wait to meet’

Kanye then retweeted a post in which President Trump was expressing his excitement about meeting Apple CEO Tim Cook with the caption, ‘Can’t wait to meet’.

Next, he posted a photo of Trump and Cook speaking together and said ‘caption this photo’.

After that, he posted messages which had apparently been sent by popular New York radio host Ebro Darden that seemed to discuss the rapper’s support for Trump.

Eric Trump also got on the Kanye train, retweeting the same tweet his dad did and adding a few American flag emojis as well.

Less than an hour after he posted his original tweet, West revealed that his wife Kim Kardashian had called him about the Trump tweet.

‘My wife just called me and she wanted me to make this clear to everyone. I don’t agree with everything Trump does,’ he wrote. 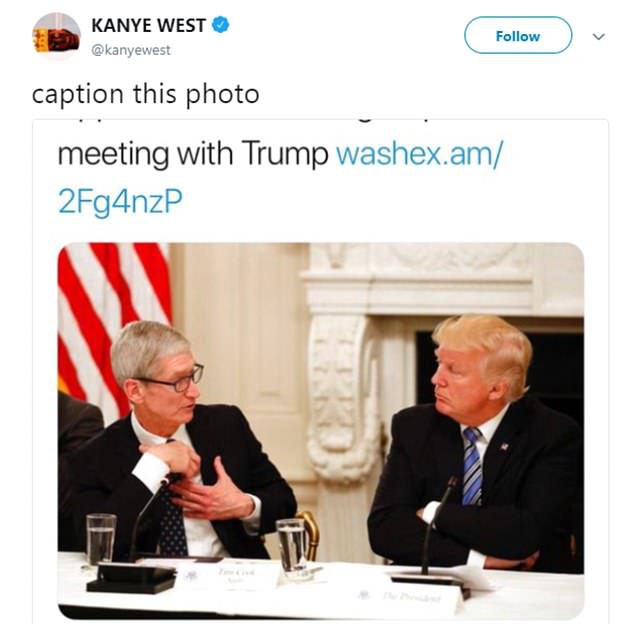 Next , he posted a photo of Trump and Cook speaking together and said ‘caption this photo’

Seconds later he wrote: ‘2 of my favorite people’ After that, he posted messages which had apparently been sent by Hot 97’s host Ebro Darden that seemed to discuss the rapper’s support for Trump In December of 2016, he actually met with Trump but soon after deleted all his post about the President after he was hit with a wave of criticism

Kardashian took to her own Twitter account to defend West and said he was ‘years ahead of his time’.

‘Now when he spoke about Trump…Most people (including myself) have very different feelings & opinions about this,’ she began.

‘But this is HIS opinion. I believe in people being able to have their own opinions, even if really different from mine. He never said he agrees with his politics.’

In a separate tweet, Kardashian reiterated that she loved and respected her husband.

‘Kanye will never run in the race of popular opinion and we know that and that’s why I love him and respect him,’ she said.

Less than an hour later at 10.30 PST, West tweeted that his wife Kim Kardashian had called him about the Trump tweet 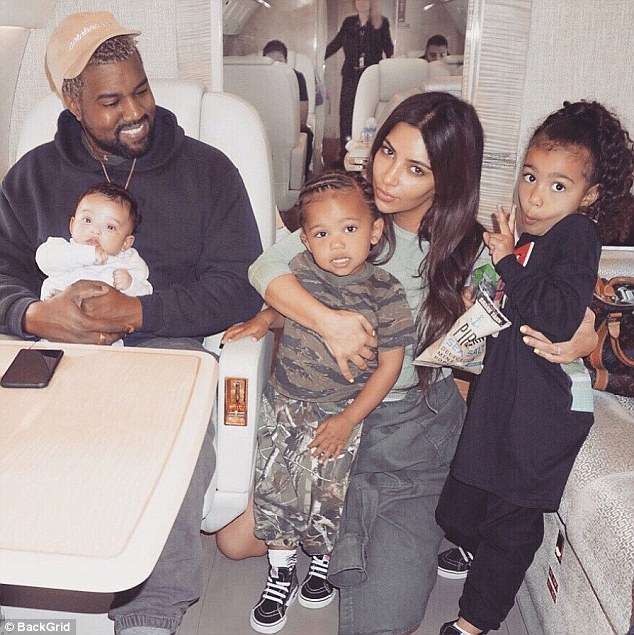 But Kardashian later took to her own Twitter to defend her husband, tweeting around 12.30pm PST that her husband was ‘years ahead of his time’ She also hit back at the media, claiming reports of West having ‘mental health issues’ were ‘not fair’ and ‘actually scary’ 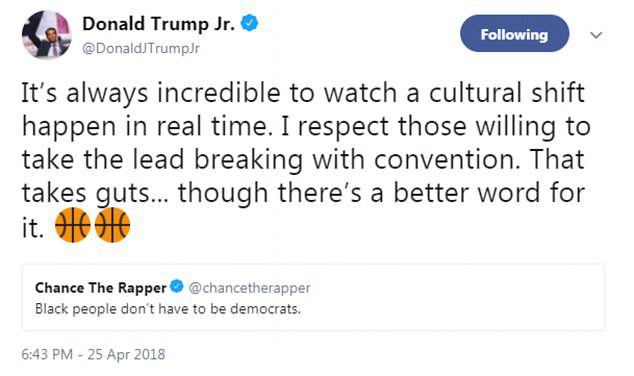 And he then retweeted a post from Chance The Rapper which read, ‘Black people don’t have to be Democrats’

‘And in a few years when someone else says the same exact thing but they aren’t labeled the way he is and you will all praise them! Kanye is years ahead of his time.’

Kardashian also hit back at the media, which she said was trying to ‘demonize’ West.

‘Your commentary on Kanye being erratic & his tweets being disturbing is actually scary,’ she wrote. ‘So quick to label him as having mental health issues for just being himself when he has always been expressive is not fair.’

Donald Trump Jr jumped in to show his support for Kardashian, retweeting her defense of West and adding #ImWithHer – the hashtag originally used to show support for Clinton during the 2016 presidential election.

And he then retweeted a post from Chance The Rapper which read, ‘Black people don’t have to be Democrats.’

Donald Jr wrote: ‘It’s always incredible to watch a cultural shift happen in real time. I respect those willing to take the lead breaking with convention. That takes guts… though there’s a better word for it.’

West’s public support for Trump even made its way into the discussion at the White House press briefing on Wednesday.

A reporter asked Press Secretary Sarah Huckabee Sanders if Trump had reached out to West following the rapper’s recent praise.

‘I don’t know of any conversation that they’ve had over the last week or so, I’ll keep you posted if that changes,’ Sanders said, breaking into a smile.

‘I know they met during the transition, that’s the only meeting I’m aware of what’s taken place or conversation.’

Eric Trump also got on the Kanye train, retweeting the same tweet his dad did and adding a few American flags 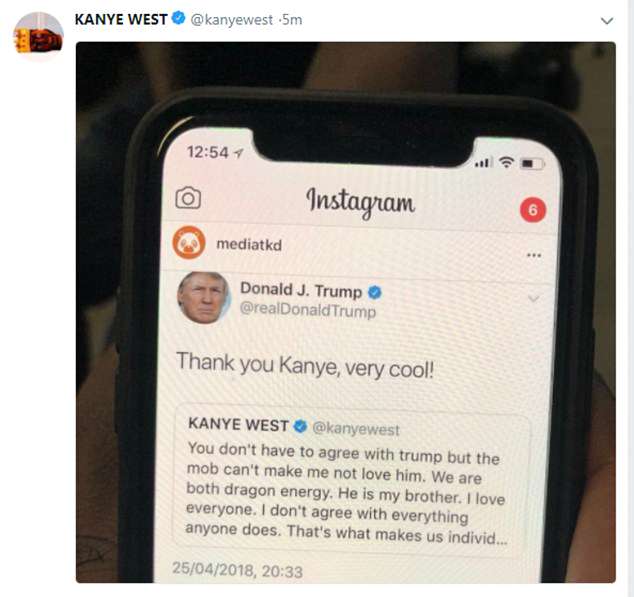 At 1 pm PST he tweeted a screen grab of Trump’s retweet – posted half an hour earlier – which he had seen from mediated, a Kanye West Twitter fan page 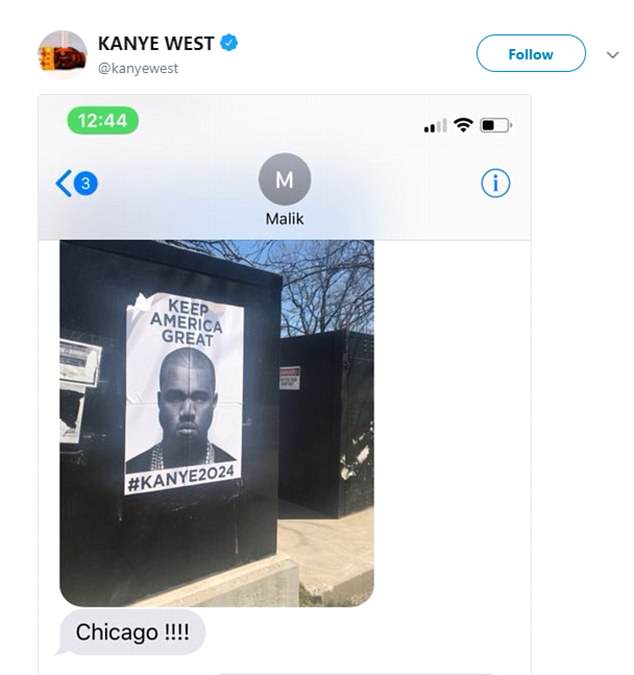 West, who made multiple references to becoming the ‘future president’ in his Wednesday tweets, also posted a picture of a poster for him to become president in 2024

At 1.30PST West posted a screengrab, which appears to be from his longtime collaborator Tracey Mills, texting him that they needed to talk about his Make America Great Again hat

West first revealed his support for Trump shortly after the November 2016 election, when he told a California concert audience he would have voted for the Republican.

‘We live in a racist country. That is a fact. This world is racist, OK? Let’s stop being distracted to focus on that as much.’

But in a separate tweet on Wednesday, Kanye wrote that he also loved Clinton, who Kardashian publicly supported in the 2016 presidential election.

‘If your friend jumps off the bridge you don’t have to do the same,’ he began. ‘Ye being Ye is a fight for you to be you.’

‘For people in my life the idea of Trump is pretty much a 50 50 split but I don’t tell a Hillary supporter not to support Hillary I love Hillary too.’

The rapper continued to discuss free thought, saying he loves when ‘people have their own ideas’.

‘You don’t have to be allowed anymore. Just be. Love who you want to love. That’s free thought,’ he wrote.

‘I’m not even political. I’m not a democrat or a republican.’

1 2Next
Prev Article Next Article
We use cookies on our website to give you the most relevant experience by remembering your preferences and repeat visits. By clicking “Accept All”, you consent to the use of ALL the cookies. However, you may visit "Cookie Settings" to provide a controlled consent.
Cookie SettingsAccept All
Manage consent