Home
Humanity
3-Year-Old Girl Wishes To Meet This Garbage Man For Her Birthday. The Reason Why Will Melt Your Heart…

We’ve already seen examples of dogs who love their postal workers, as well as ways you can make their job easier in the warm summer weather, but what are people doing for their garbage men? Brooklyn, a little girl from Illinois, recently celebrated a birthday. Instead of asking for new toys or clothes, she asked her mom if she could meet their garbage man, Delvar. While this might sound like a strange request, you don’t know the garbage man like Brooklyn does.

Well, she’d never actually met him before, but she made sure to say “hi” to him every Thursday when he drove through her neighborhood. So, on Brooklyn’s birthday, her mom made sure that she’d be able to meet her hard-working hero. Check out the pictures below to see the moment when these two finally got to meet.

This is Brooklyn and Delvar. All Brooklyn wanted to do for her birthday was meet her favorite garbage man and share one of her special birthday cupcakes. 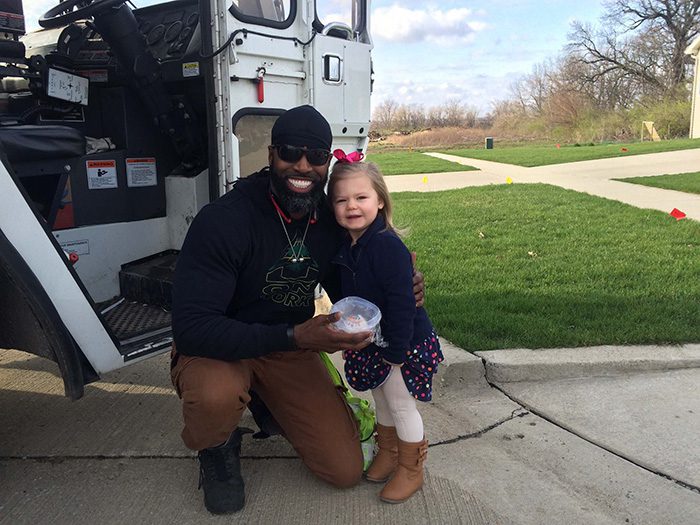 According to Brooklyn’s mom, “Thursdays are by far her favorite day.” You guessed it, Thursday’s are garbage day, and Brooklyn always looks forward to a wave and a smile from Delvar.

On Brooklyn’s birthday, instead of waving, her mother motioned for Delvar to pull over next to them. “He pulled over, got out, and gave us his BIG smile. Brooklyn was instantly speechless as she handed him the cupcake,” said her mom. 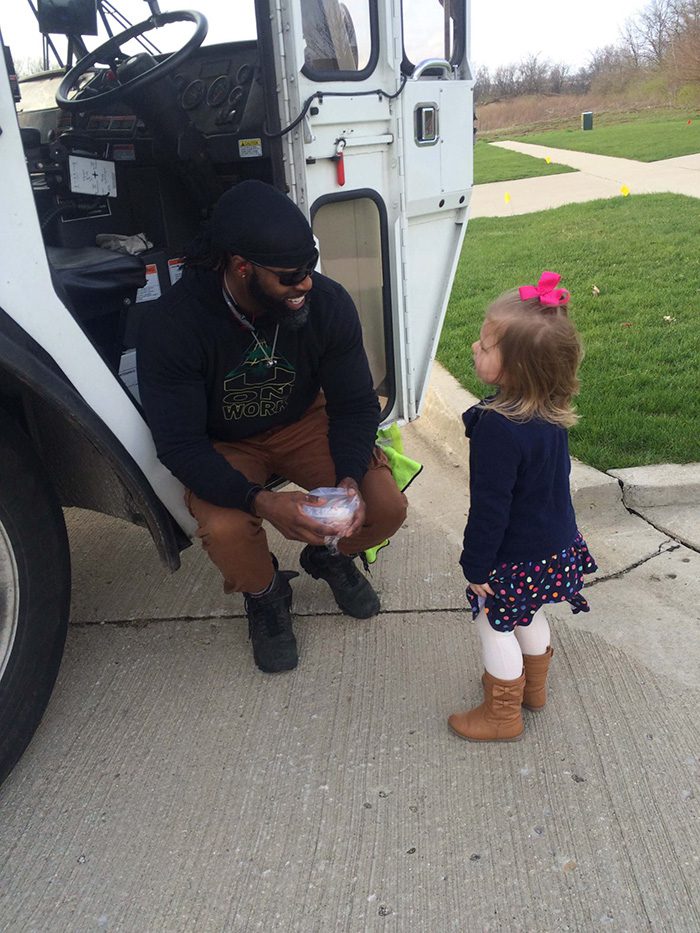 She explained to Delvar how much his weekly smiles mean to her daughter. To their surprise, Delvar responded by saying that he looks forward to seeing them every week, too! After they said their goodbyes, Delvar left and Brooklyn and her mom drove to daycare. Her mom noticed that she was more quiet than usual in the backseat, and when she asked if anything was the matter, Brooklyn responded by saying, “Mommy, I’m so happy.” 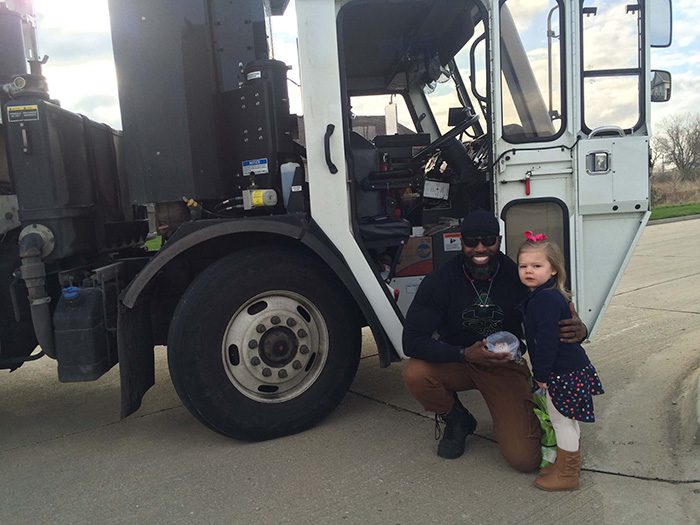 But their story doesn’t end there! The next week, Delvar returned with some presents of his own for Brooklyn. 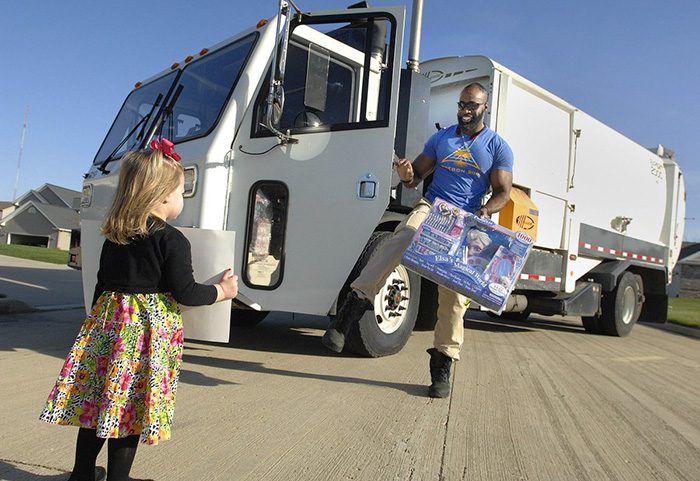 Delvar went out of his way and used his own money to make Brooklyn’s birthday as magical as possible. 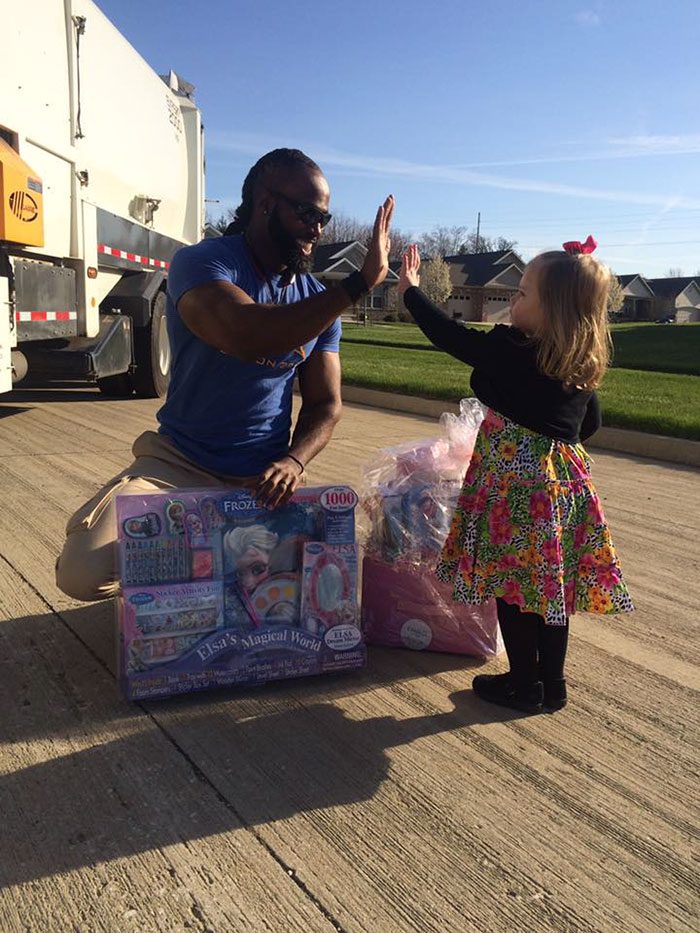 Her mom concluded by saying: “Thank you for the joy that you bring Brooklyn every Thursday morning, for making her birthday special, and for making my heart happy. It may be a little thing that you do, but it means so much to us!” Delvar and Brooklyn are two individuals who truly know the meaning of community. 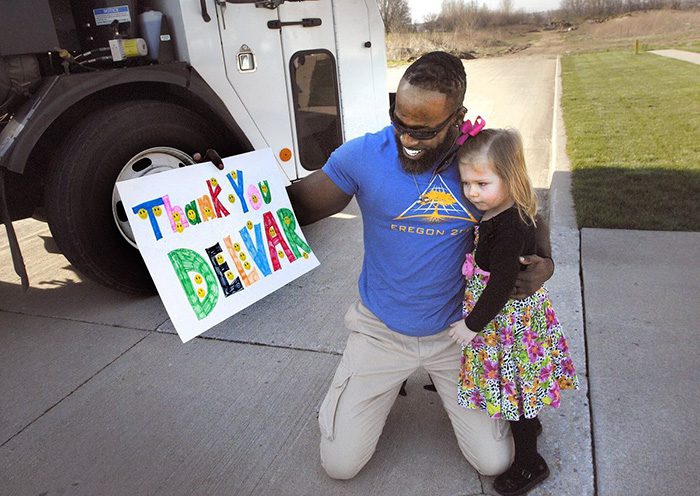