The idea that planting trees could play a key role in the fight against climate change is by no means a new one.

But despite its prevalence in the climate conversation, scientists have yet to work out where exactly all these trees could grow and how much carbon they’d trap without eliminating space that humans now rely on.

In a first of its kind study, a team in Switzerland has calculated the potential area and impact of a new forest large enough to slash roughly two-thirds of the atmospheric carbon pool.

With about a trillion new trees planted across an area roughly the size of the United States, they say increasing Earth’s tree cover could be our best bet at winning the climate fight. 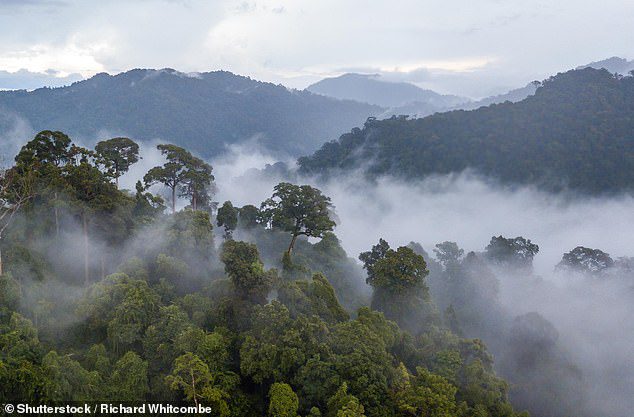 In a first of its kind study, a team in Switzerland has calculated the potential area and impact of a new forest large enough to slash roughly two-thirds of the atmospheric carbon pool. File photo

‘This is by far – by thousands of times – the cheapest climate change solution’ and the most effective, study co-author Thomas Crowther, a climate change ecologist at the Swiss Federal Institute of Technology in Zurich, told the Associated Press.

The researchers at the Crowther Lab analyzed thousands of satellite images to assess Earth’s tree cover and potential to support additional forest areas under the current climate conditions.

They also took into consideration the human-related factors that could skew the estimates, such as farmland or other non-forest green spaces.

‘One aspect was of particular importance to us as we did the calculations: we excluded cities or agricultural areas from the total restoration potential as these areas are needed for human life,’ lead author Jean-François Bastin said in a statement.

According to the researchers’ calculations, Earth could support an additional 1.6 billion hectares more trees than it currently has, to make for a total forest area equaling 4.4 billion hectares of continuous tree cover.

That’s roughly one trillion to 1.5 trillion new trees across an area the size of the entire United States, the team estimates.

Once these new trees reach maturity, they could store an estimated 205 billion tonnes of carbon – or about two thirds 300 billion tonnes of human activity has driven into the atmosphere since the Industrial Revolution.

But, not all forested areas would be well-suited for this type of restoration, the team notes.

According to the researchers’ calculations, Earth could support an additional 1.6 billion hectares more trees than it currently has, to make for a total forest area equaling 4.4 billion hectares of continuous tree cover. The total land available that can support trees is mapped 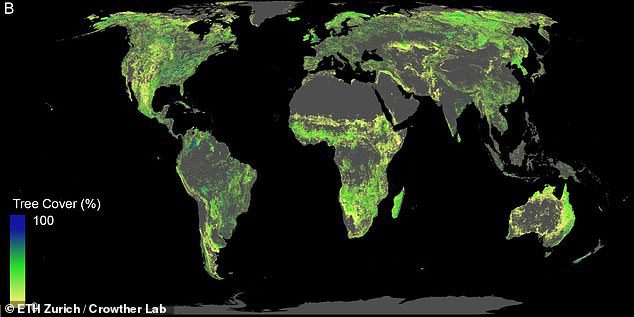 The map above shows the land available for forest restoration (excluding deserts, agricultural and urban areas)

And while the northern boreal forests in areas such as Siberia are expected to increase with climate change, dense tropical forests are likely to become less hospitable and could face losses that outweigh the possible gains.

‘We all knew that restoring forests could play a part in tackling climate change, but we didn’t really know how big the impact would be,’ Crowther said.

‘But we must act quickly, as new forests will take decades to mature and achieve their full potential as a source of natural carbon storage.’