Day after day Jared saw the same dog chained up in the terrible summer heat. It was easy to assume that this dog was probably not very friendly, but Jared knew that he couldn’t pass by another day without giving this dog a little bit of attention. He braved the risk of being bit, and stuck his hand through the fence. To his surprise, the dog started to muster up the strength to get out from the pile of dirt he was living in, and came his direction. 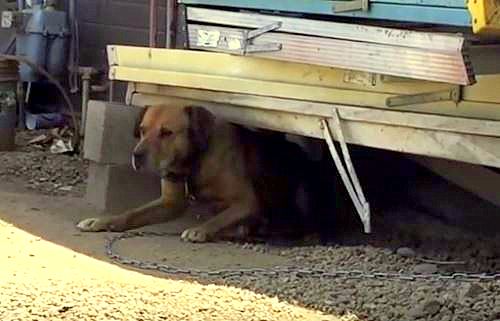 For two weeks, Jared continued to walk by, stick his hand through the fence, and offer friendship to the dog he now affectionately named Rusty Diamond.

Finally, Rusty’s owner noticed Jared talking to her dog. She gave warning to Jared that he would get bit, but Jared only asked to take Rusty home with him. It only took a few minutes to persuade Rusty’s owner, and she allowed Jared to take him away.

For the first time in an entire decade, Rusty got to walk freely. His chain was a temporary leash until Jared took to give him a bath for the first time in his life. But after all of this, would Rusty find a forever home? His fate was in Jared’s hands now. Watch the video below to find out what plans Jared had for Rusty, it is the most incredible ending to Rusty’s story.