Oprah Winfrey’s fans praised her Golden Globes speech accepting the Cecil B DeMille award, calling ‘it one of the greatest American speeches’ and even dubbing her the future president.

Twitter users went wild over the barnstorming speech, joking that the former talk show host should make a run in 2020 – but her longtime partner appeared to open the door to a battle with Donald Trump.

‘It’s up to the people,’ Stedman Graham, told The Los Angeles Times. ‘She would absolutely do it.’

Gayle King, Winfrey’s best friend, echoed Graham’s sentiments, telling the newspaper: ‘I thought that speech was incredible. I got goosebumps,’ she also told The Times.

This is the first time that anyone close to the American icon has admitted that she has ambitions for the White House. 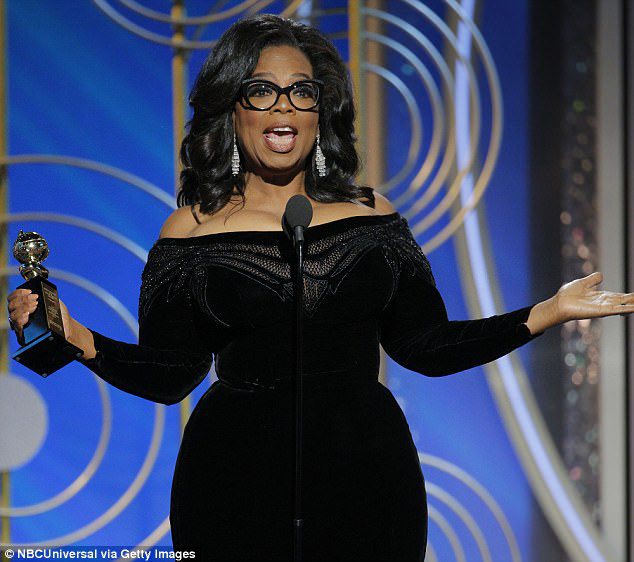 Oprah Winfrey’s fans praised her Golden Globes speech accepting the Cecil B DeMille award, calling ‘it one of the greatest American speeches’ and even dubbing her the future president 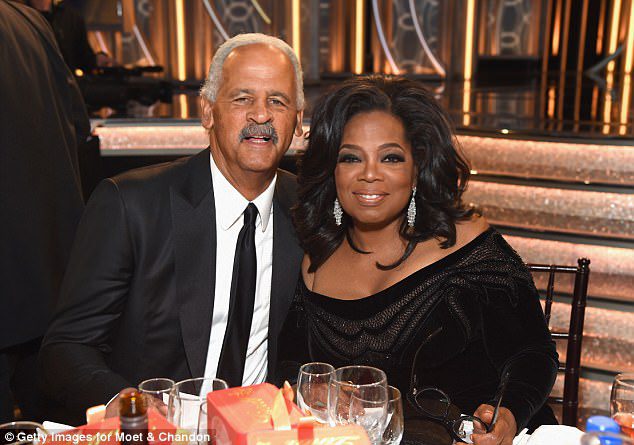 Winfrey’s longtime partner said her making a run for the Oval Office (Pictured together, at the Golden Globes on Sunday) could be a real possibility. ‘It’s up to the people. She would absolutely do it,’ he told The Los Angeles Times

The emotional and barnstorming speech set off fevered speculation online that this could be construed as her first campaign speech.

The chorus was led surprisingly by NBC’s official Twitter account, which declared Oprah to be ‘our future president’ in what appeared to be an unprecedented endorsement.

NBC did not amend the tweet during the evening.

The tweet came after host Seth Meyers made a joke in his monologue about a run by Winfrey.

‘In 2011, I told some jokes about our current president at the White House Correspondents Dinner. Jokes about how he was unqualified to be president,’ he said.

‘Some have said that night convinced him to run. So if that’s true, I just want to say: Oprah, you will never be president! You do not have what it takes!’

However, many determined quite the opposite. Streep gave a ringing endorsement when she was asked about Oprah’s speech by The Washington Post’s Steven Zeitchik.

‘She launched a rocket tonight. I want her to run for president. I don’t think she had any intention [of declaring]. But now she doesn’t have a choice,’ Streep said.

Several Twitter users as well quickly declared that Oprah needed to make a run for the Oval Office.

Another tweeted: ‘I mean, it’s been fun to joke about Oprah running for president, but that speech really was presidential. That was phenomenal, even by her standards.’ 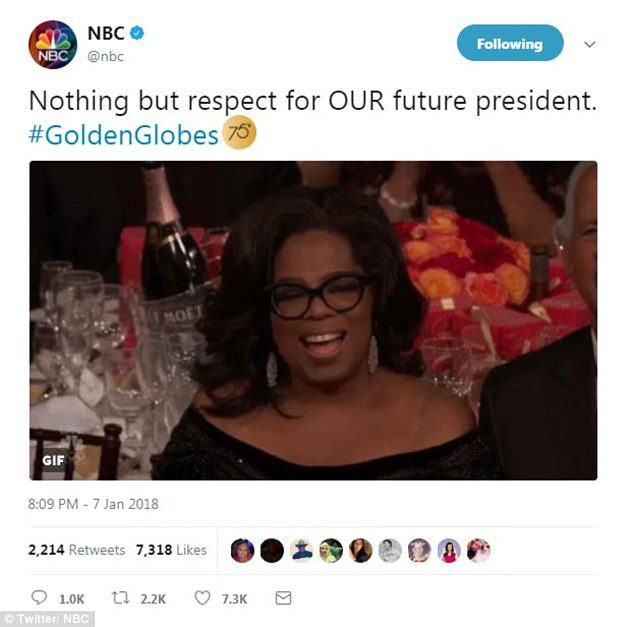 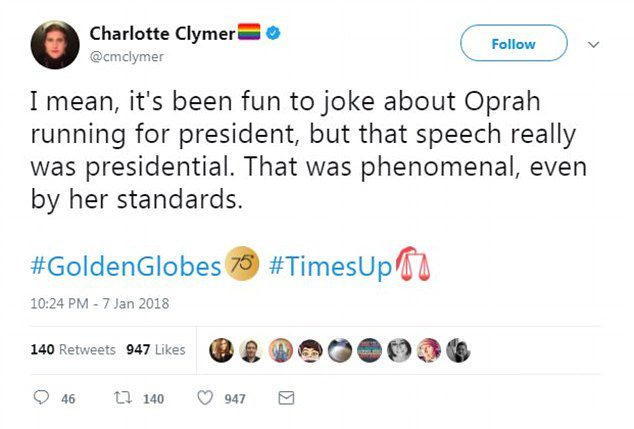 Winfrey began her speech by saying she hopes by accepting the award, the first black woman to do so, has an impact on young girls.

‘At this moment, there are some little girls watching as I become the first black woman to be given this award,’ Winfrey said Sunday.

‘I want all the girls watching to know: A new day is on the horizon. When that new day finally dawns, it will be because of the magnificent women and many of them are in this room tonight.’

She closed her speech with a call for unity: ‘I want all the girls watching to know a new day is on the horizon.

‘And when that new day finally dawns, it will be because of a lot of magnificent women, many of whom are right here in this room tonight, and some pretty phenomenal men, fighting hard to make sure they are the leaders to take us to the time where nobody has to say ‘me too’ again.’