Home
Humanity
After Feeding A Homeless Man Who Was Eating From The Trashcan, She Received This In Return

Leaving school and I saw this man eating from the trash can. I asked would he like to go to Wendy’s to eat.

He said yes as we are walking he said, ”Thank you, Lord, for sending someone.” He told me he has not eaten since breakfast. Because the Pope was in town, all the Catholic soup kitchens were closed. And he just needed enough to get him over til morning. After he had ordered he said let’s take a picture on that fancy phone, you have there.

The world needs to see what a walking blessing looks like. he was so humble he was about to order from the dollar menu. I told him no don’t he dare he make sure he gets enough to be full… He said I can’t let you leave until I hug you.

As he was hugging me, he was praying… Little did he know I’m the one who received a blessing. 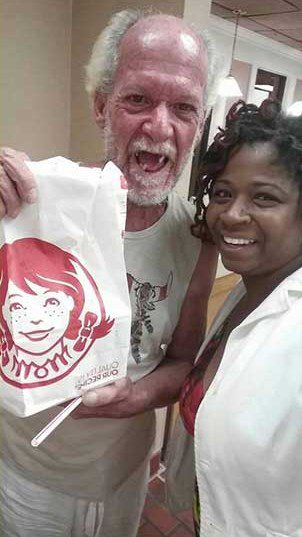