A father-of-two who began transitioning into a woman is now back to living as a man after changing his mind seven months into the process.

James Cohen, 36, from Leeds, who is a father to Seren, eight, and Electra, seven, told wife Eirian, 36, that he wanted to start living as a woman named Kara in January last year, explaining that he had been hiding his true gender since he was a child.

The couple split up but continued to live together as best friends and started paying for private hormone treatment to kickstart Kara’s transition.

But in July last year, seven months after the announcement, Kara admitted that she no longer wanted to look like a woman and wanted to live as a man named Jim.

Jim, who describes himself as ‘gender fluid’, now lives with his daughters, Eirian and her new partner in Portugal and Eirian claim he has never been happier. 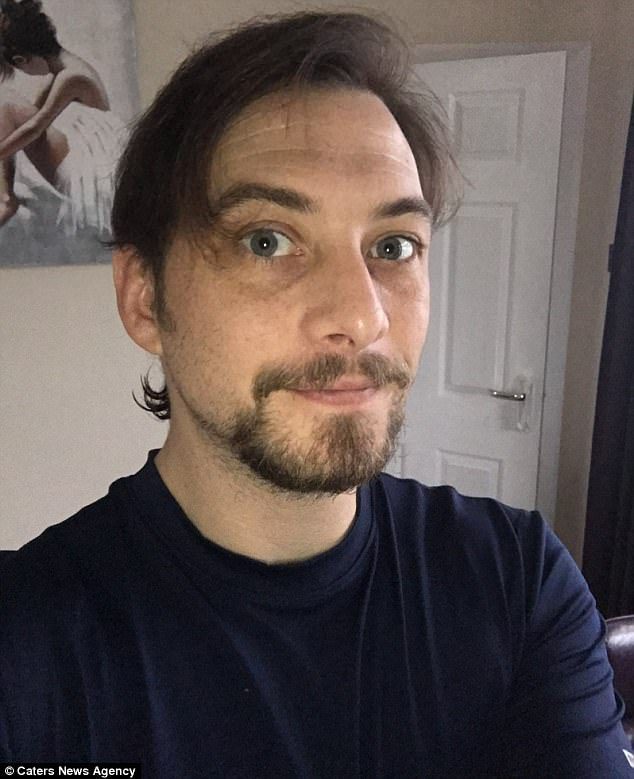 James Cohen, 36, from Leeds, who is the father to Seren, eight, and Electra, seven, told wife Eirian, 36, that he wanted to start living as a woman named Kara in January last year. She changed her mind seven months later and is now living as a man named Jim, pictured at the end of last year 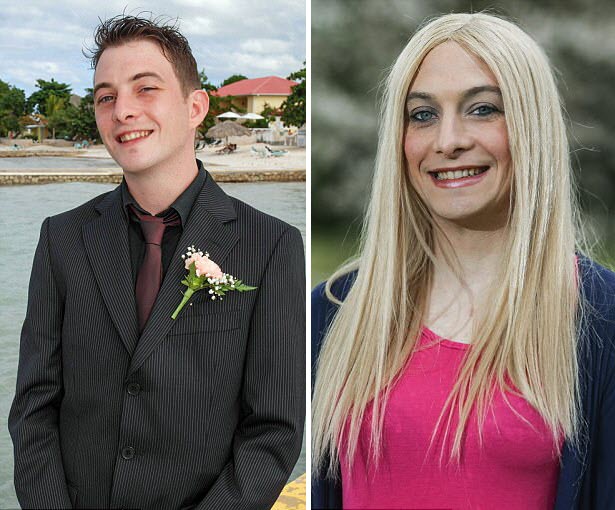 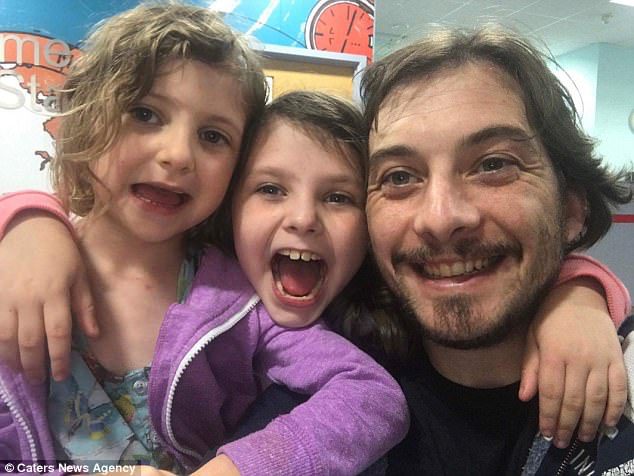 Jim decided to move in with Eirian and his daughters, pictured last month, at the end of 2017

Eirian, an author, said: ‘Jim had hidden his feminine feelings all his life and despite dressing as a woman last year, he still didn’t feel 100 percent happy.

‘People were then assuming he shouldn’t do anything that’s not female related and that’s when he felt as though he was being put in another box.

‘Jim is gender fluid and doesn’t particularly relate to either gender at the moment, he is just himself.’

Eirian and James eloped in Jamaica in 2009 and went on to have their two daughters. Before his transition, Eirian described her husband as a ‘man’s man’ and a ‘typical bloke’, but admits she knew there was ‘something she wasn’t admitting’. 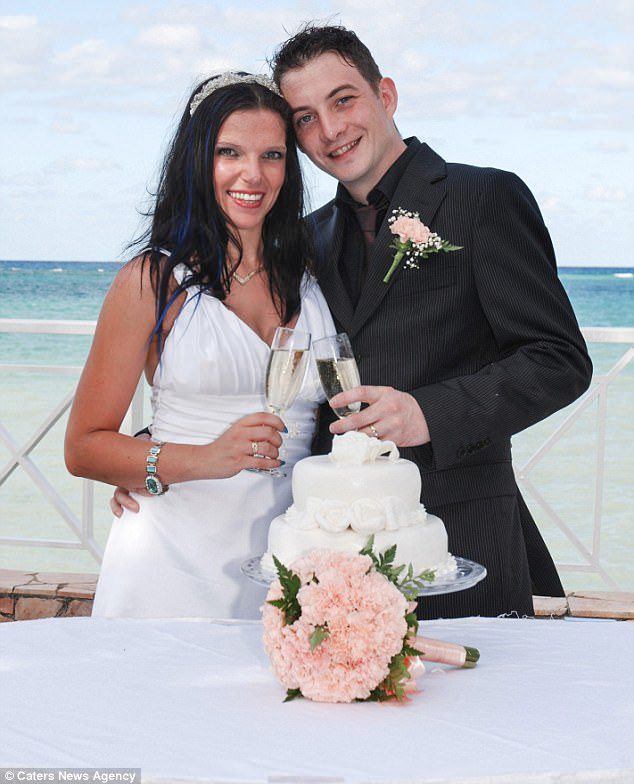 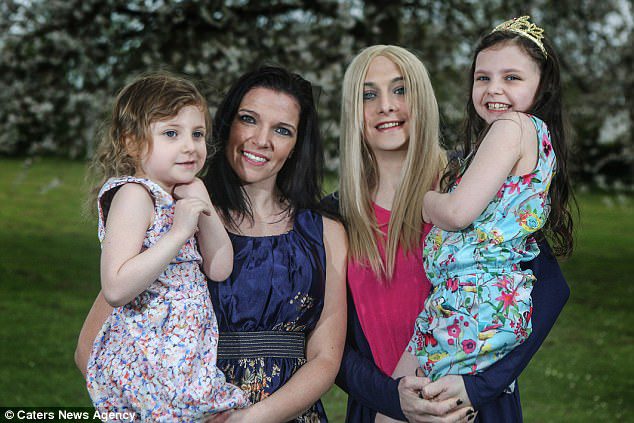 She said: ‘James kept saying he didn’t know who he was, then he would change the subject and didn’t want to tell me what he meant.

‘When we got married he seemed to be quite obsessed with my wedding dress, and he wanted to try it on as a laugh.’

The mother-of-two admitted it was still a ‘shock’ when her husband of eight years told her he wanted to be known as Kara. But she continued to support the father of her children.

She continued: ‘We’d forked out privately for him to have hormone treatment straight away so it was a shock when seven months later he told me that he no longer wanted to look like a woman. 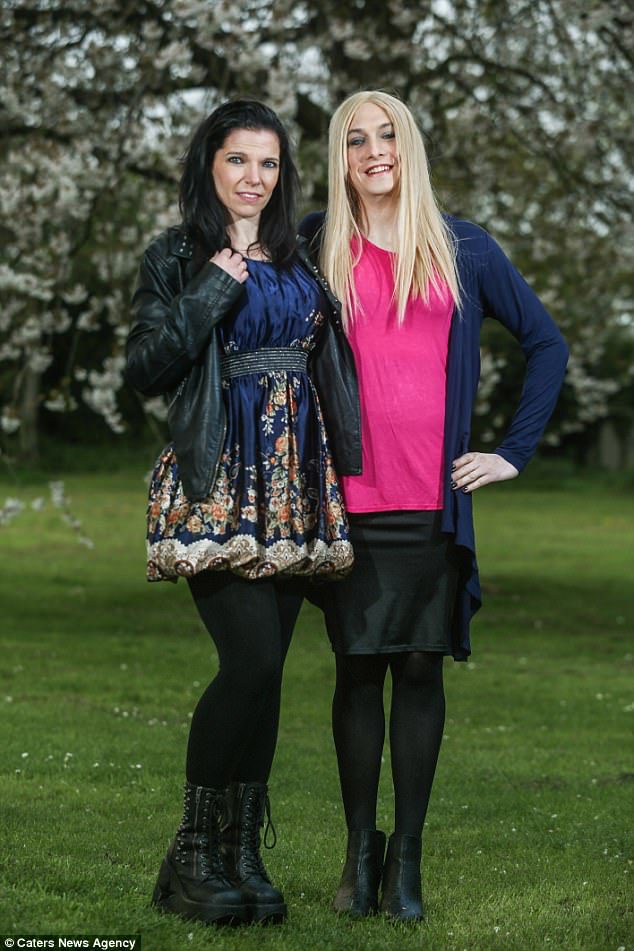 Eirian and Kara in April last year. Their marriage ended but the couple are still ‘best friends’

‘He decided in July last year that he didn’t want to appear female any longer. Jim stopped wearing his blonde wig, dresses, and heels and instead grew a beard.’

Despite being initially ‘confused’, Eirian continued to support Jim.

‘After all, we had eight happy years of marriage and two daughters,’ she said.

Eirian said their daughters accepted that their father was transitioning into a woman and that they’ve explained the latest stage ‘in a way they understand’.

She added: ‘They don’t mind if he had a beard or wears a dress, kids aren’t born with prejudices, that’s something they learn.’

Jim decided to move in with Eirian and his daughters at the end of last year and their friendship has ‘continued to grow’.

Eirian added: ‘Jim is now the happiest he has ever been, he has no regrets about transitioning into a woman and feels lighter for having explored his feminine side after keeping it repressed for all those years.

‘I’ve had online trolls accusing us of lying about Jim being trans because he knows has short hair and a beard but what they don’t realize is that people can be gender fluid, we never let them get to us anyway.

‘We receive so many positive messages and my businesses are doing really well.’

Eirian is currently writing Passion for Freedom which will be released on March 12 this year.

Jim said: ‘I’m glad I made my first transition and I have absolutely no regrets, everyone should do what makes them happy. Eirian and I are still best friends.’