School walkouts are planned across the United States to protest gun violence after the Florida shooting.

The Women’s March, an organization that advocates for policy and legislation change on human rights issues, announced a 17-minute walk out on March 14 to protest Congress’ inaction on gun control.

This protest will happen one month after the deadly shooting at Marjory Stoneman Douglas High School in Parkland, Florida, where 17 people were killed.

The Network for Public Education (NPE), an advocacy group for public schools, also announced a walkout on April 20 at 10 am. 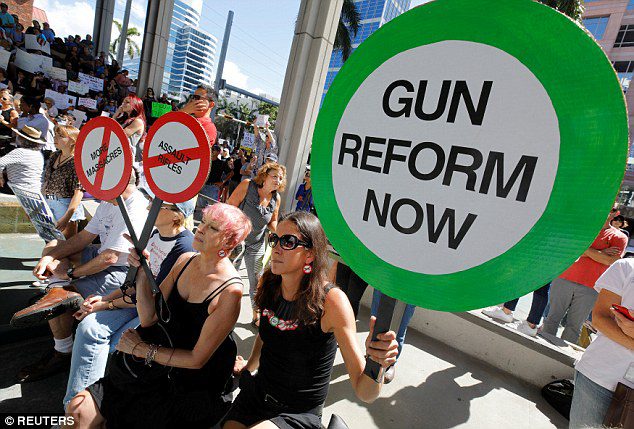 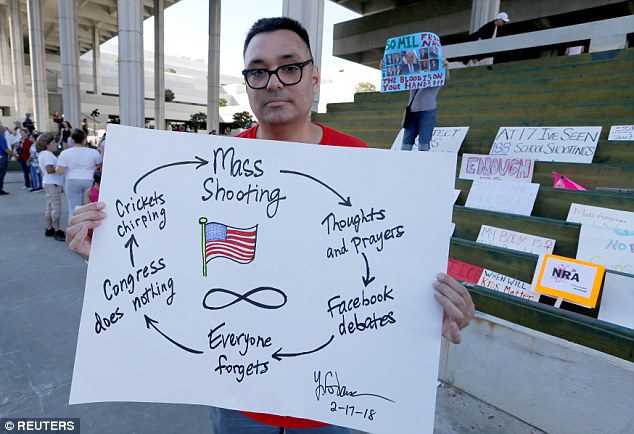 The Network for Public Education (NPE) is planning a walkout on April 20 to protest gun legislation. The organizers said politicians are ‘sitting on their hands’ while students are murdered. Pictured is Lawrence Nodarse, a school teacher in Florida, at the rally on Saturday

The NPE created a Twitter page to advertise the walkout. They are encouraging everyone to wear orange, the official color of the anti-gun violence movement

The Women’s March chose March 14 because it will be one month after the Florida school shooting.

Nikolas Cruz, 19, allegedly walked into Marjory Stoneman Douglas High School on Wednesday and killed 17 people with a semiautomatic AR-15 rifle, according to reports released by authorities. 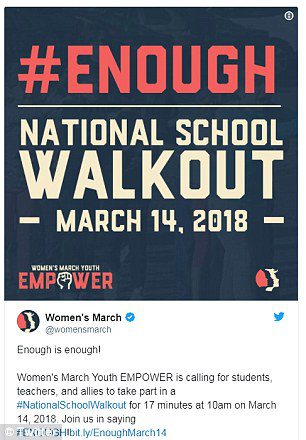 The Women’s March is also organizing its own walkout on March 14, exactly one month after the Florida shooting massacre

He now faces 17 counts of premeditated murder and is being held without bail at Broward County jail in Florida.

Since the Florida shooting on February 14, students and other people in the community have been vocal about the need for gun laws.

Thousands of students, parents and community members rallied on Saturday in Fort Lauderdale, Florida, during the March for Action on Gun Violence to express their anger towards current gun laws.

The Women’s March tweet said it was calling all ‘students, teachers and allies,’ to take part in the movement to let lawmakers know they’ve had ‘enough’ with gun violence.

The walkout will happen at 10 am across all time zones.

National School Walkout, a Twitter page created by the NPE after the shooting, went viral with its own post about a walkout on April 20.

This date was chosen because it will be the 19th anniversary of the Columbine High School shooting in Colorado.

Columbine was the largest modern day school shooting at the time before it was later surpassed by Virginia Tech in 2007.

National School Walkout’s post has been shared more than 100,000 times and liked close to 200,000 as of Sunday morning. 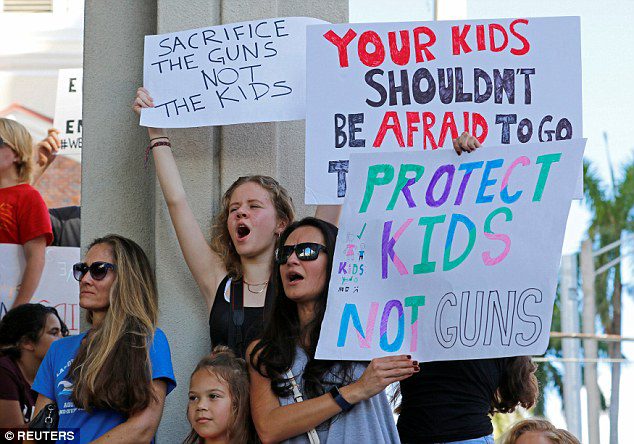 The March for Action on Gun Violence in Fort Lauderdale, Florida, was in front of the US Courthouse. Many students, parents and teachers have been outspoken since the shooting about a need for better gun regulations 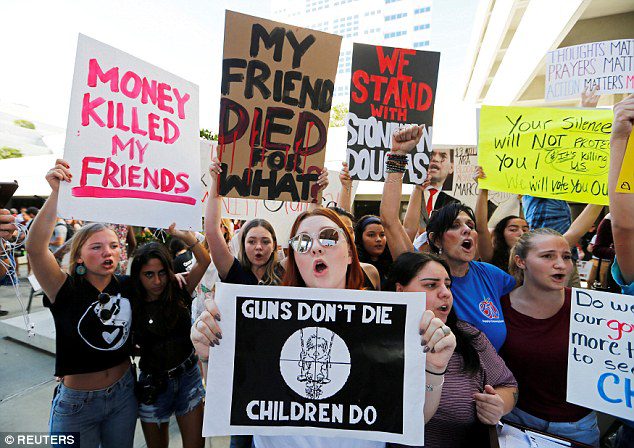 Organizers for the different walkouts are hoping this will send a message to politicians about the need for stricter laws. Pictured is demonstrators during the rally on Saturday

The organizers are also encouraging people to organize sit-ins and other marches to keep the conversation going about gun regulations.

The NPE started a petition on Change.org to explain the walkout and why it was organizing the movement. 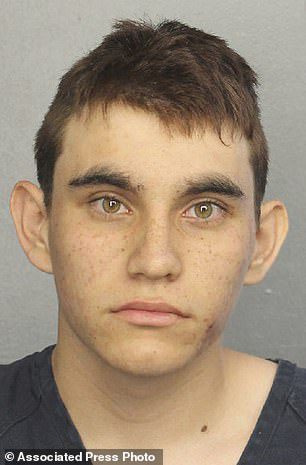 This photo provided by the Broward County Jail shows Nikolas Cruz, the teen suspected of killing 17 and injuring more than a dozen in a school shooting on Wednesday in Florida

A statement by the organization said: ‘There has been too much complacency on the part of politicians when it comes to gun violence. The time to act is now.

‘The violence of guns is being performed in our schools and our communities. Not the Senate floor.

‘As the future of America, it is time for teenagers to speak their minds and put their frustration into action.’

The organization is urging everyone to wear orange on that day, the official color the anti-gun violence movement.

Diane Ravitch, the NPE’s president, and Carol Burris, the NPE’s executive director, said in an online post: ‘The politicians sit on their hands as our children and their teachers are murdered in their schools.

‘We will be silent no more.’

These walkouts are planned to be another step towards imploring Congress to re-evaluate gun regulations. 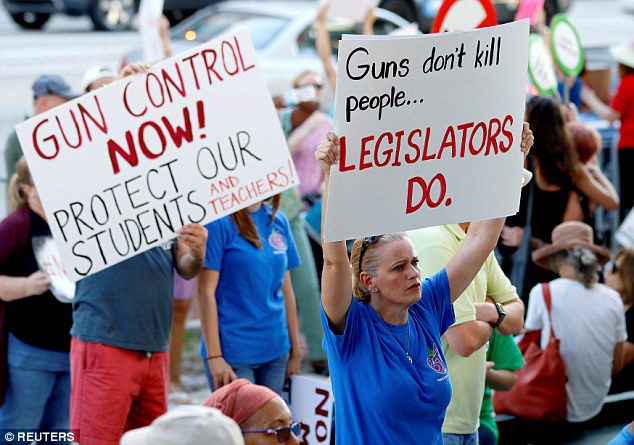 As of Sunday morning, more than 35,000 people have signed a petition to walk out of schools on April 20. The date was chosen because it will be the 19th anniversary of Columbine High School’s school shooting where 15 people were killed 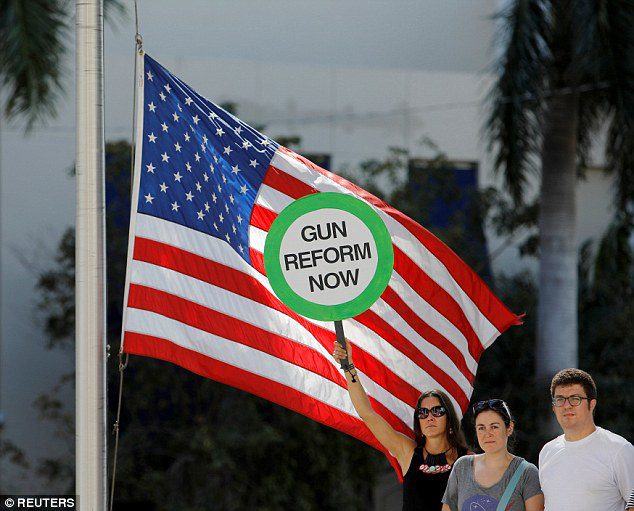 Organizers said these walkouts and rallies are a way for teenagers to be heard since they currently can’t vote in the US. Pictured is more protesters during the rally on Saturday