Anyone who has ever strapped on a pair of skates has also experienced a wipeout or two on the ice.

But few of us could possibly boost the caliber of a slip up that one Japanese teen experienced last week, which has, in fact, made her famous.

Madoka Takayama, 16, a student from Yamaguchi, recently went ice skating along with her friend Kyoka Tanaka, who is also 16. 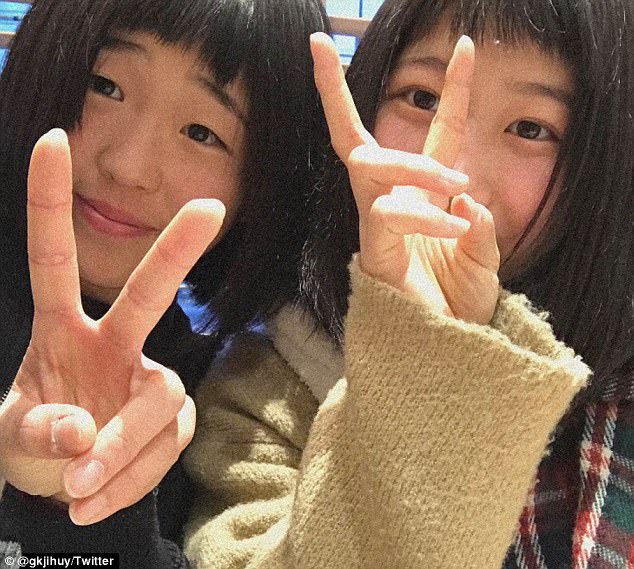 Partners in crime: Madoka Takayama (left), 16, a student from Yamaguchi, has gone viral thanks to a video of her failing at ice skating recorded by her friend Kyoka Tanaka (right) 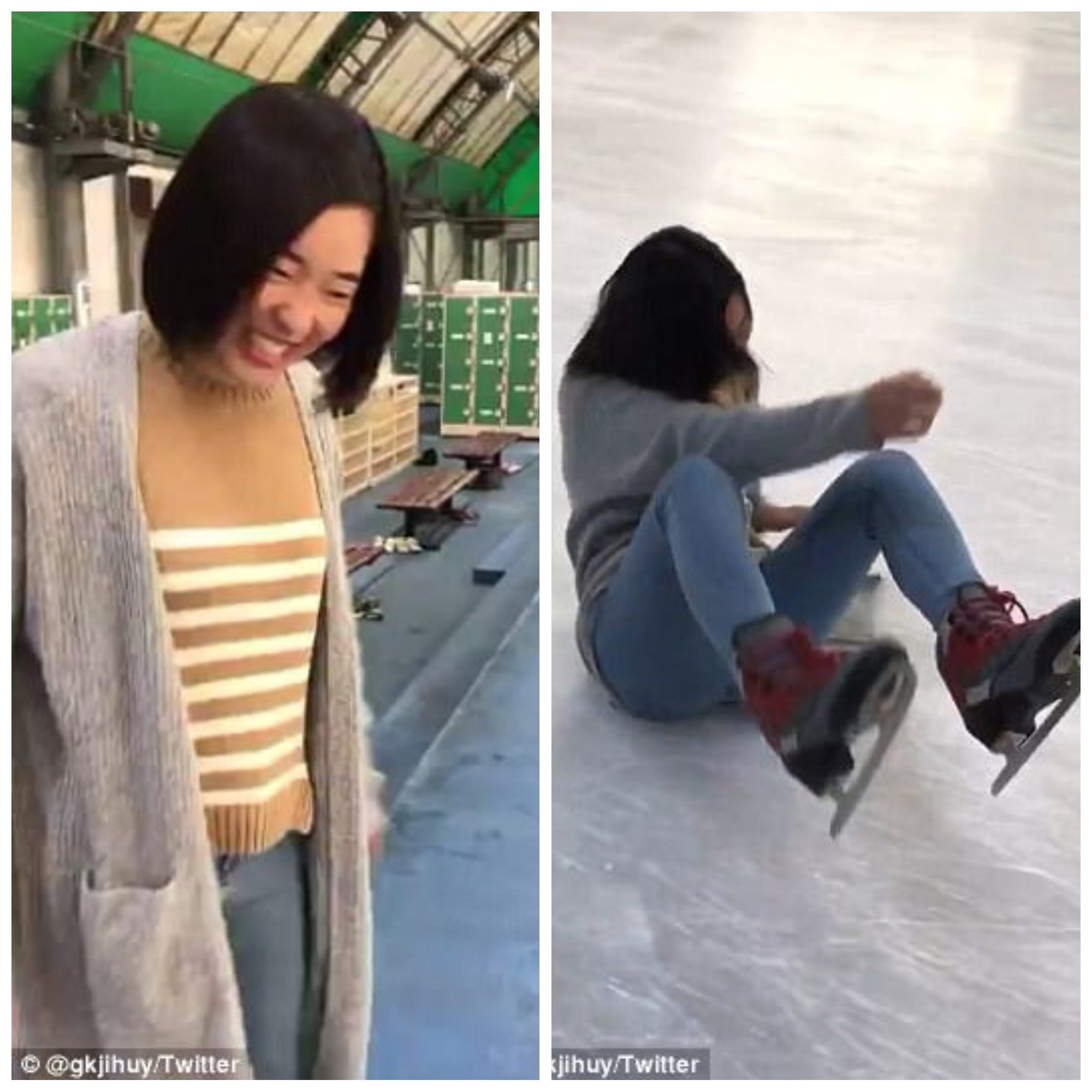 Going down: The clip sees Madoka in a striped shirt and long cardigan falling the second she steps onto an ice rink

Madoka had told her friend that she hadn’t been skating in four years, which gave Kyoka the idea of recording her return to the ice.

However, Kyoka could not have known that what she would capture would soon be viewed by millions of people online.

The clip shows smiling Madoka in a striped shirt and long, grey cardigan stepping confidently towards the edge of the rink in her skates.

Then, with her very first step on the ice, she slides forward, tries to stop herself, but ends up falling straight down. For a moment she lies on the ice in embarrassment. 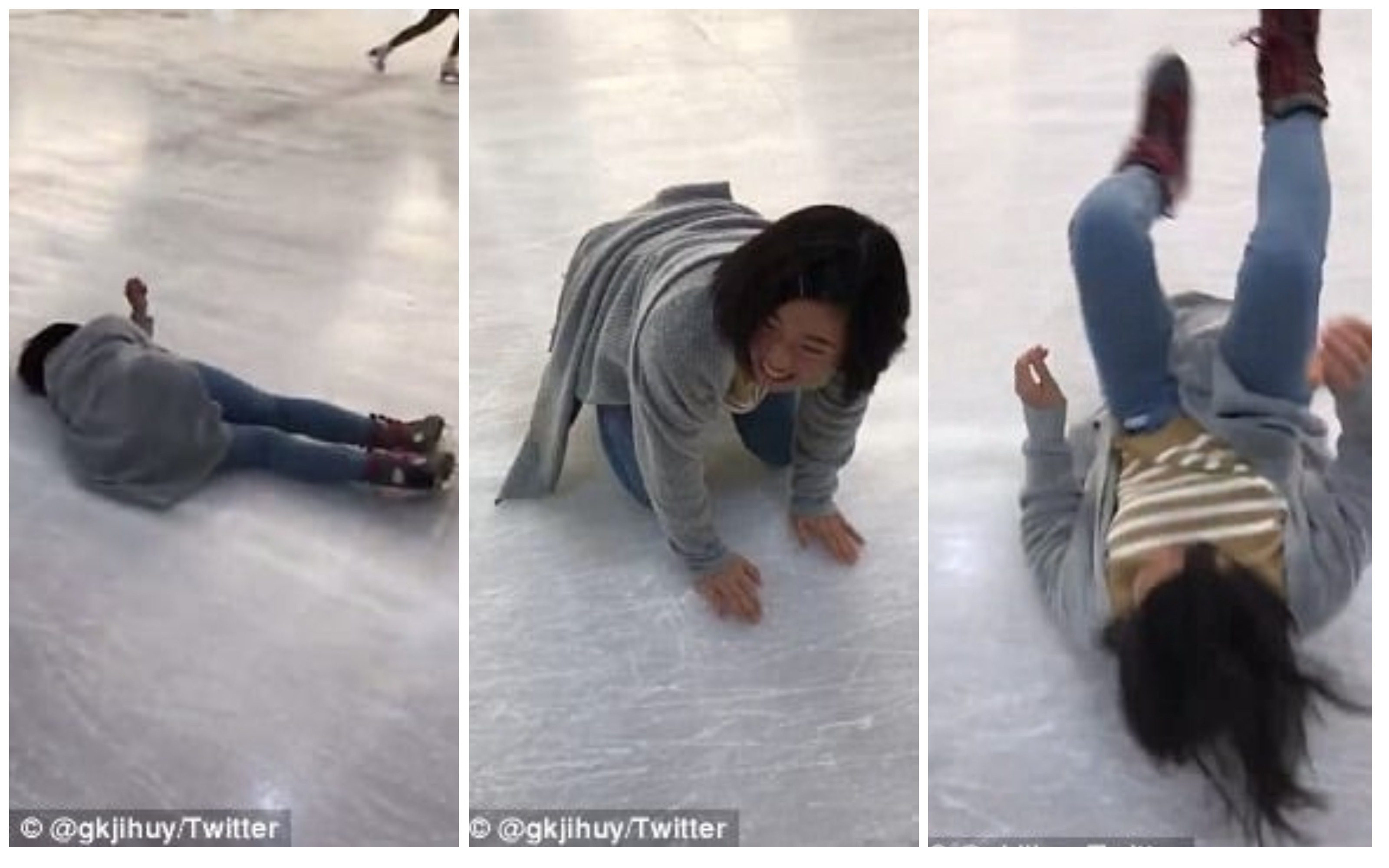 Try, try again: After lying on the ground for a moment, Madoka attempts to get up, only to end up on her back once again 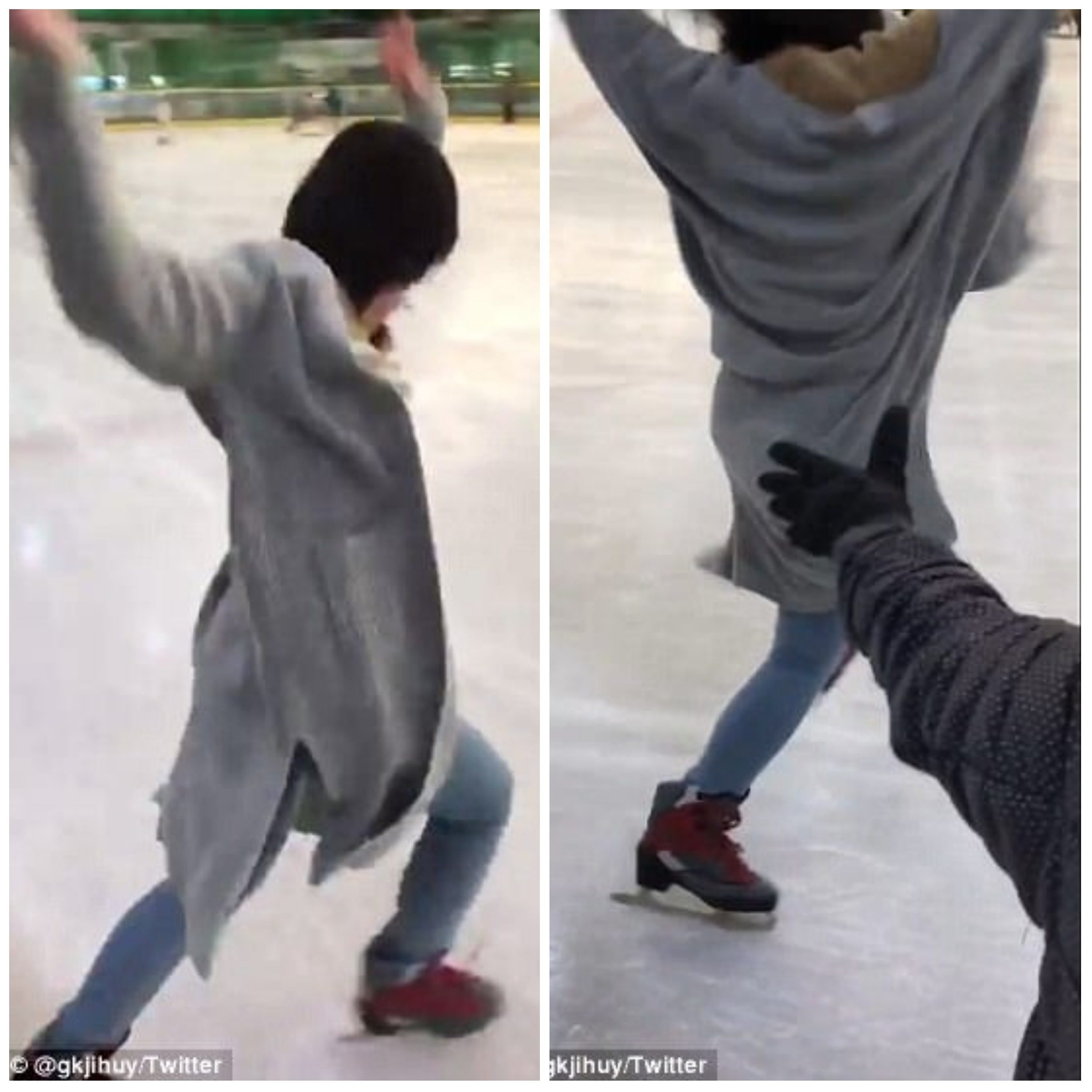 It continues: Next, the teen manages to get up from the floor, but quickly begins to slip 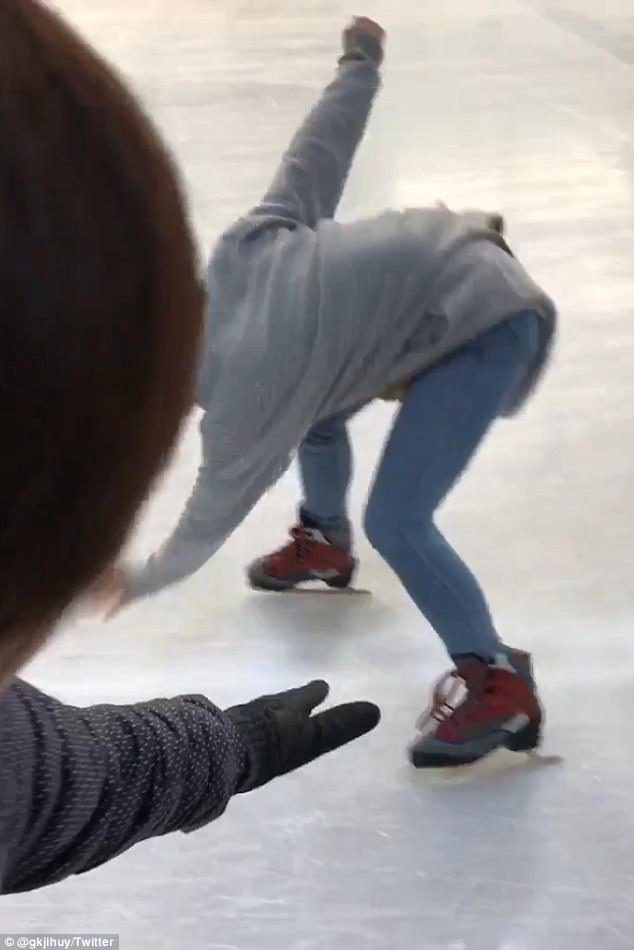 Close calls: Madoka’s friend reaches out to help as she whirls around, unable to regain her balance

Laughing, she rolls over and attempts to get up again, immediately getting thrown onto her back before she can even get upright.

Next, she rolls onto her knees and carefully tries to get up, but as soon as her hands leave the ice, her feet begin to flail.

The hilarious scene of her whirling in circles, arms waving as she tries to regain her footing goes on for nearly ten seconds before she desperately grips the boards, saving herself from falling once again.

The young girl is then seen losing her breath with laughter at her own situation and then flashing a pair of peace signs at the camera. 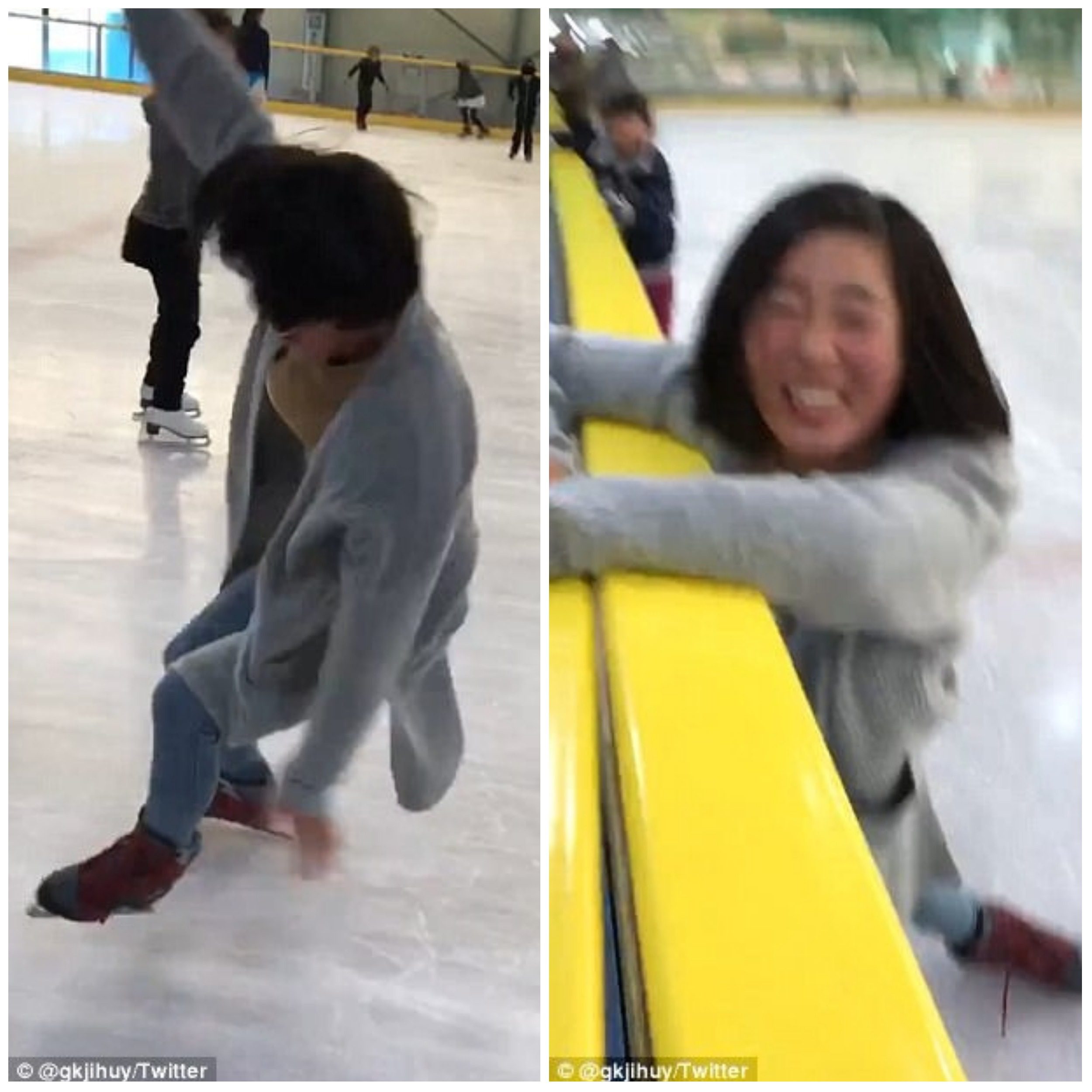 Last-minute save: After nearly ten seconds of flailing, the teen grabs the boards, keeping herself from falling again 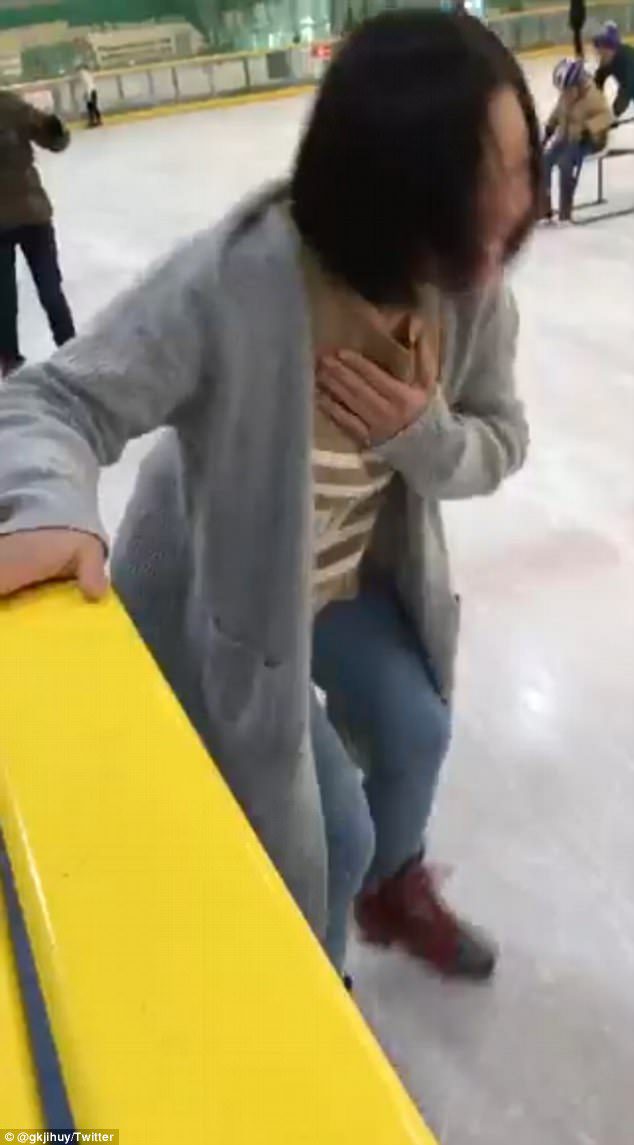 Seeing the light side: The clip ends with Madoka laughing hysterically at her own wipeout

The girls then shared the funny video on Twitter, writing in the caption in Japanese: ‘The courage you have when you can’t skate but go straight in anyway.’

The video soon made Madoka an online star, with more than 11 million views and over 130,000 shares. It was also shared to Chinese social media network Weibo, where it also gained millions of views.

Speaking to BuzzFeed, Kyoka revealed that her friend ‘said she’s not afraid of anything,’ adding that Madoka is ‘a quick learner and got the hang of it quickly.’

Madoka herself added: ‘I wasn’t hurt at all! Not a scratch.’