A woman who tipped the scales at 303 pounds has revealed how removing carbs from her diet has been the key to her almost 100-pound weight loss.

Veronica, a mother of three from Oregon, who posts under the username Baconandburgers on Instagram, started her weight loss journey in February 2014.

She started walking, ate a Paleo diet and started the 30 Day Shred and ended up losing 60 pounds in six months. 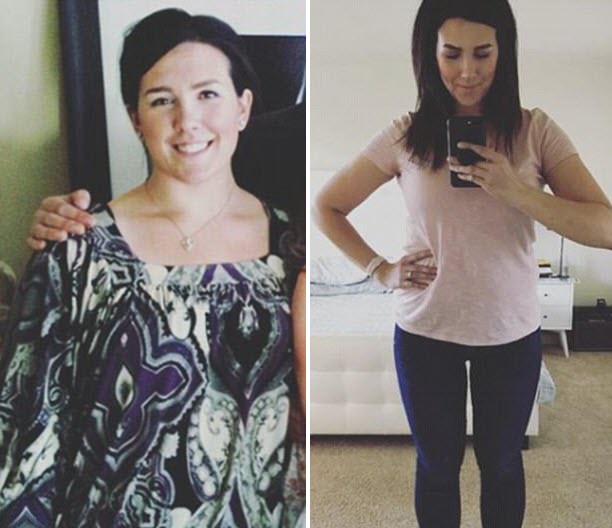 Transformation: Veronica, a mother of three from Oregon, once weighed 300 pounds (left) but has slimmed down to 215 pounds (right) thanks to the ketogenic diet 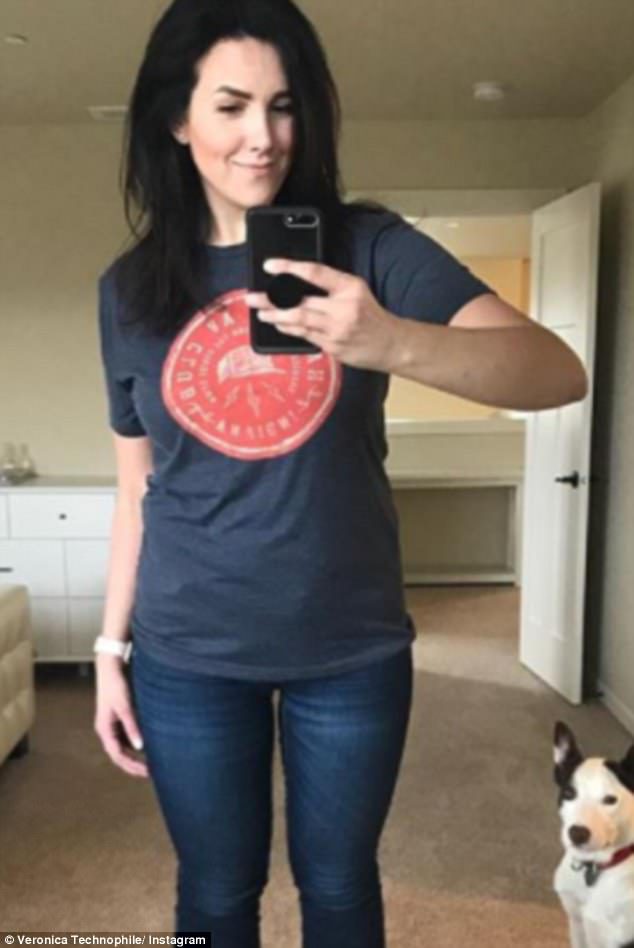 Change: The mother took to Instagram to reveal she officially ‘broke up with carbs’ in January 2017 and to reflect on her weight loss journey 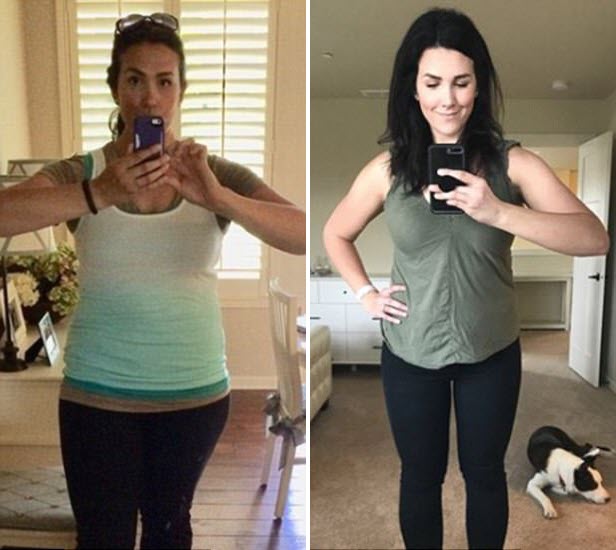 However, she shared that she spent the next two years losing and gaining the same 20 pounds until she started the ketogenic diet in January 2017, weighing 238 pounds.

Veronica spent the first four months of the year shedding weight at a rapid pace and quickly got down to her lowest weight of 205 pounds by October 2017.

The keto diet is a low carb, a high-fat eating plan that encourages the body to burn its own fat stores by depleting the cells of glycogen from carbohydrates.

However, Veronica’s keto journey has not been an easy one, and Veronica recently took to Instagram to reveal she initially struggled with the eating plan.

‘One year ago today I decided to break up with carbs. Now, look. I could have done better. It was a pretty rough year for my body, and it didn’t end at my low weight. Thankfully, I did end the year with a net loss of 22 pounds,’ she wrote next to side-by-side shots of her weighing 238 pounds in one picture and 215 pounds in the other.

She added: ‘I spent the first four months of the year shedding weight rapidly only to plateau for another three. By the summer, I had switched things up several times in an effort to make the scale budge (to no avail).’

In August 2017, after her weight started to plateau, Veronica experimented with intermittent fasting to see if her weight would drop.

Intermittent fasting can be used for weight loss and typically involves skipping breakfast and scheduling all your daily meals within an eight-hour period.

The thought behind the 16 hours of fasting is that this period gives the body time to regulate insulin resistance, thus burning fat stores more efficiently. 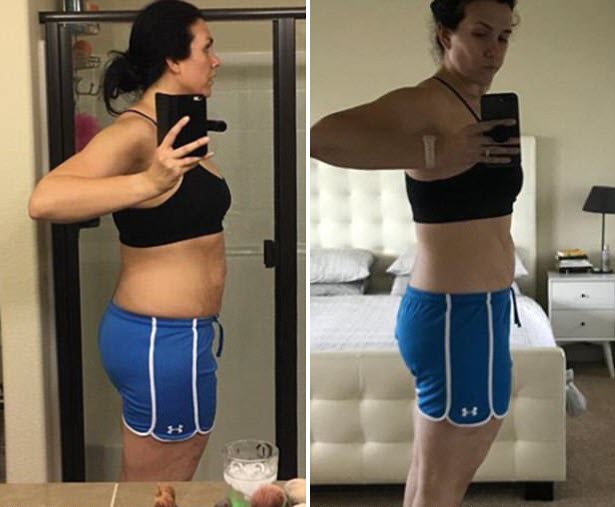 Trigger: Veronica tried the CICO diet in the fall of 2017 but this triggered a period of binge eating. She is pictured left weighing 244 pounds and right at 215 pounds in January 2018 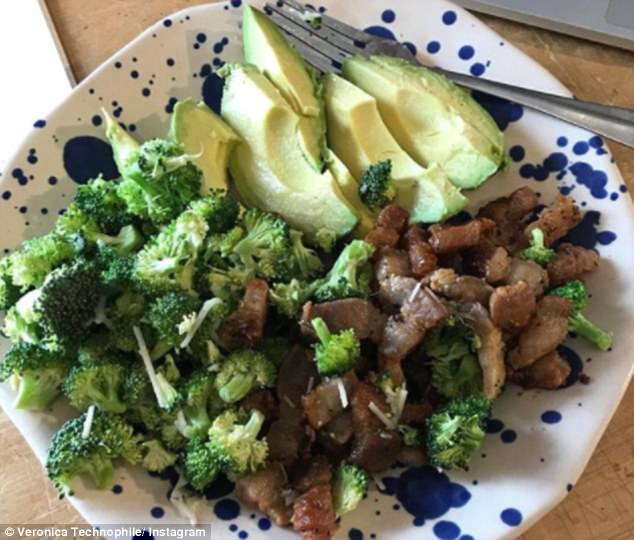 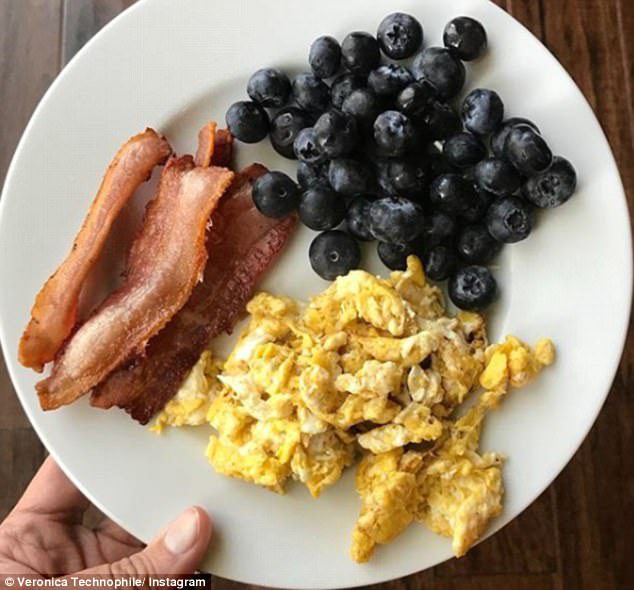 Fasting: Veronica was also able to get her weight down by following an intermittent fasting plan that encourages participants to consume all their calories in an eight-hour period 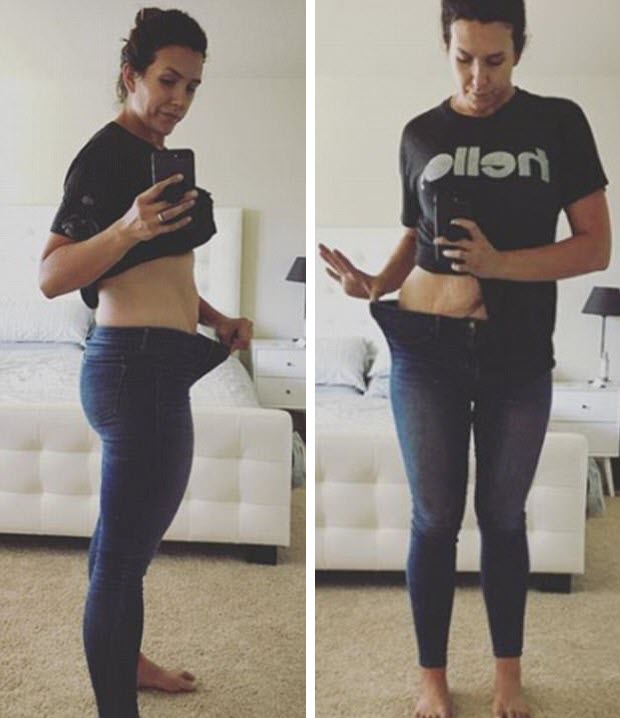 Achievement: Pictured in September 2017, Veronica has managed to lose 22 pounds overall since January 2017 and is committed to continuing her journey in 2018

She would fast for a 14-16 hour period and set her macros to 10 percent carbs, 60 percent fat and 30 percent protein.

However, after 21 days, and despite getting down to 205 pounds, she then followed with the CICO (calories in, calories out) plan, a calorie-controlled diet where any food, including junk and highly processed foods, can be eaten, as long as they fall within a daily calories allowance.

She ultimately gained six pounds but managed to lose 22 pounds in total by the end of 2017.

She explained: ‘As the fall approached, I experimented with overeating on keto where I saw my lowest weight ever of 205. However, I followed that experiment with a high-carb experiment, which I ended early after a six-pound gain triggered my binge eating.’

However, she didn’t let this experience break her resolve and she’s hopeful for what 2018 will bring.

Speaking of how far she’s come, Veronica revealed: ‘I had stopped weighing myself after the scale tipped over 300 pounds. I was miserable. I was lost. I spent a long time being a square try to fit into a round hole. I talk a lot about having created a life that I love but the truth is this wasn’t magic and it didn’t happen overnight. It was a series of events that led me to where I am now.

‘Most of them were not easy. Most of the time I didn’t think I’d come through the other side. But I persevered and I made it. I’m still not 100 percent where I want to be but it doesn’t prevent me from moving forward.’

Veronica has now returned to the keto diet and has also vowed to be kinder to herself as she continues pursuing weight loss.

‘I resolved to kick the scale to the curb and measure my progress with photos and measurements,’ she wrote. ‘Being gentle with myself this year is a top priority. So, I might not be where I thought I’d be at this point, but you’d better believe that I’m proud of that 22-pound net loss. Keto hasn’t changed my life, I changed my life, and I’m proud to have met some people here who have truly influenced me on my journey.’