This couple took the meaning of a white wedding to a whole new level and tied the knot in arduous weather conditions – refusing to bow down to the snow brought in by the ‘Beast from the East’.

Jemma Swainston-Rainford and Steven Lucock planned their fairytale wedding for Wednesday, February 28th at the Alnwick Treehouse in Northumberland – but one thing they did not account for is a barrage of snow and sub-zero temperatures.

Despite some guests who were due to come up from the south having to abandon their journeys, the wedding went ahead and was one of the only ceremonies to take place in the area that day, according to the registrar.

Their happy day may not have gone as smoothly as they liked, as one farmer who gave the father of the groom a lift had his wheel fall off on a route. He then had to get the local Alnwick farming community to give them a helping hand. The local radio even started rooting for the happy couple!

Mr. Lucock said: ‘The night before the wedding Jemma was in tears, she didn’t think it was going to go ahead and the makeup artist called to say she couldn’t make it.

‘When guests started canceling we prepared for the worst but we ended up getting a fairytale wedding that everyone will remember.

‘The photographer Sean Elliott totally improvised and managed to do an amazing job even in the freezing cold. The results are there for everyone to see. We never imagined in our wildest dreams we would have such a perfect day.

‘It was better than we hoped for, we have to thank everyone who attended and trekked through the conditions, everyone now has a story that they’ll remember for a long time.

‘It was like something out of a film, and that’s all anyone kept saying. The weather didn’t hit us, it joined us for a special day.’

Wedding photographer Sean Elliott, based at the Biscuit Factory in Newcastle, managed to take incredible photographs from the wedding ceremony of the newly married couple, proving that Storm Emma and the Beast From The East are no match for true love.

After the event, the award-winning photographer said: ‘Wow! I did not imagine today’s wedding would unfold as amazingly well as it has done! The wedding had so much camaraderie around it – from strangers & farmers giving lifts to guests to people stepping in last minute… you couldn’t make it up.’ 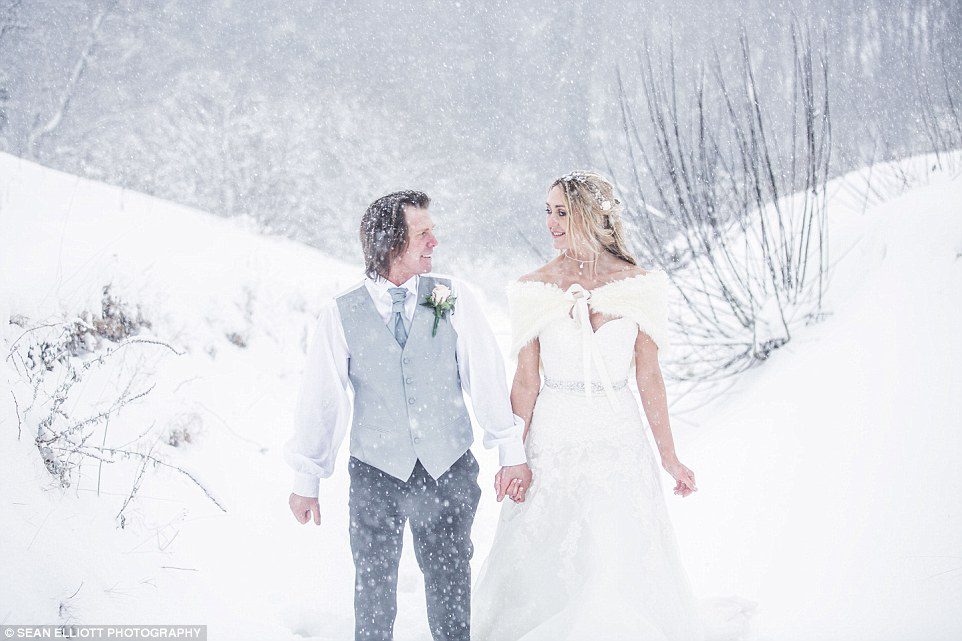 Jemma Swainston-Rainford and Steven Lucock gaze lovingly into each other’s eyes during their special day at the Alnwick Treehouse in Northumberland. Despite the wintry conditions, the couple managed to brave the cold and tie the knot

Jemma Swainston-Rainford and Steven Lucock hold hands as they make their way through the snow. The bridge is still clutching flowers in her right hand while she holds onto her husband’s hand on February 28, 2018 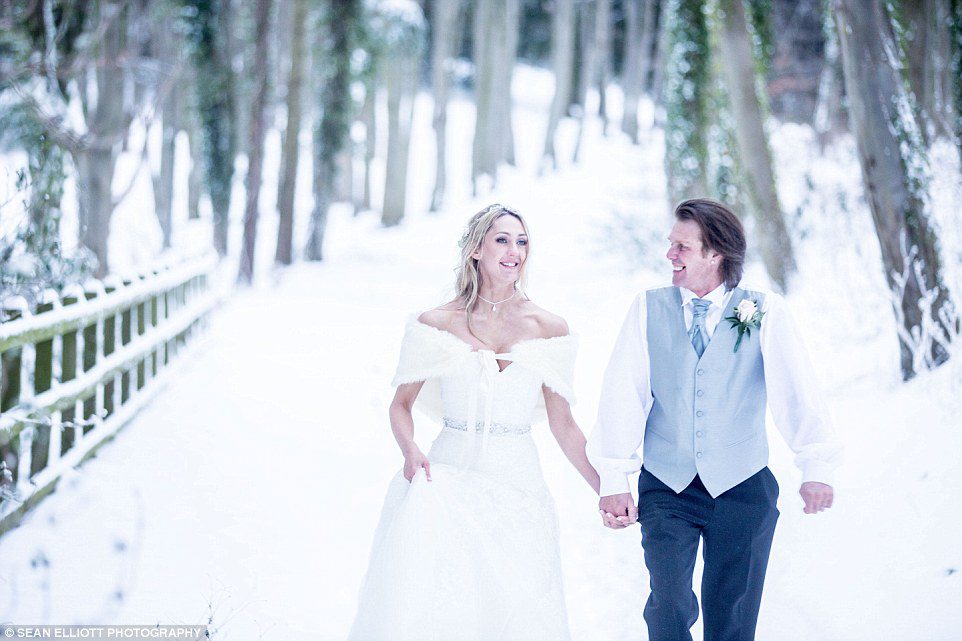 The married couple walk hand-in-hand through the wooded forest, which was completely covered with snow after the Beast From The East met with Storm Emma, bringing in a barrage of snow and sub-zero temperatures which could have put a stop to the ceremony 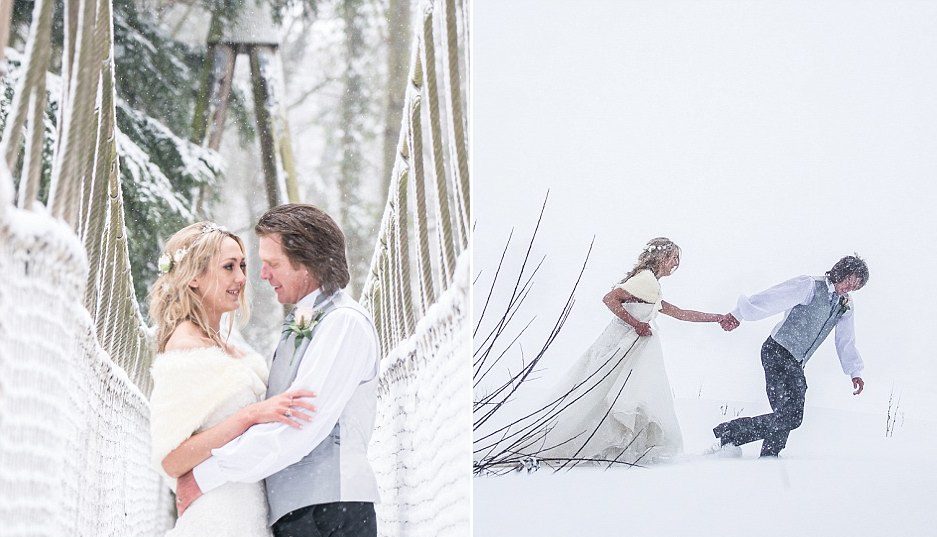 The happily married couple share an embrace along with a rope bridge at the Alnwick Treehouse in Northumberland, where the couple tied the know (left). The pair managed to make their way through the blustery conditions, with Steven giving his wife a helping hand and helping to guide her through the snow 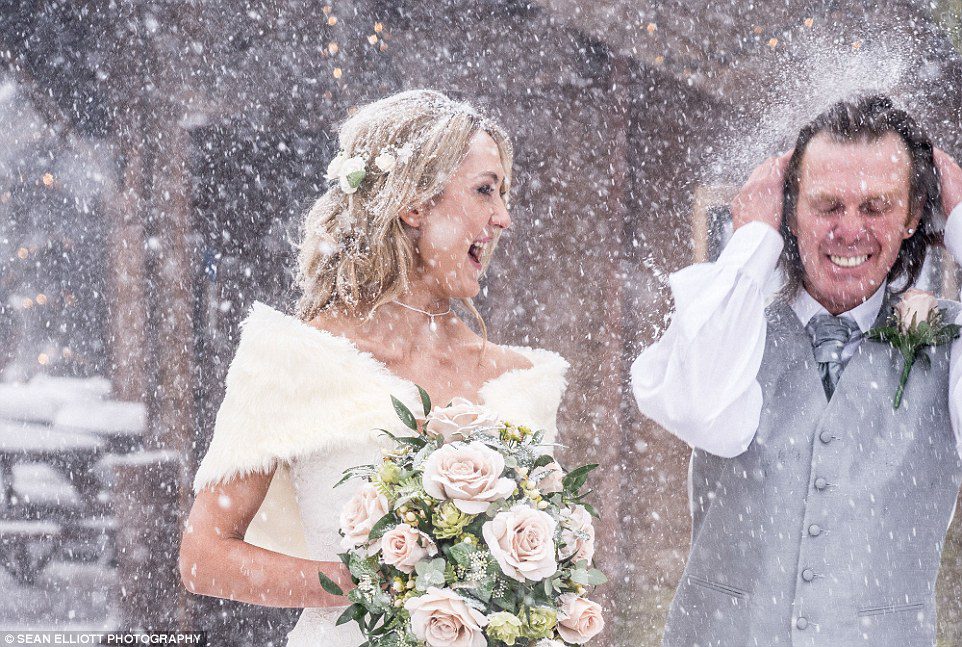 Steven cannot help but smile as he pushes the snow back from out of his hair as his other half Jemma laughs as well. Despite the cold weather, the pair did not seem to be bothered by the conditions, with Jemma opting for a sleeveless white dress and Steven deciding not to wear a blazer 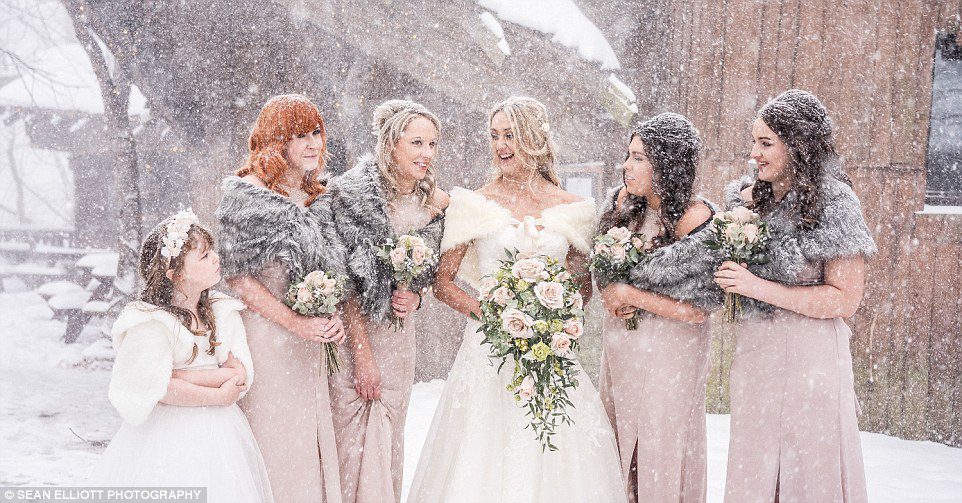 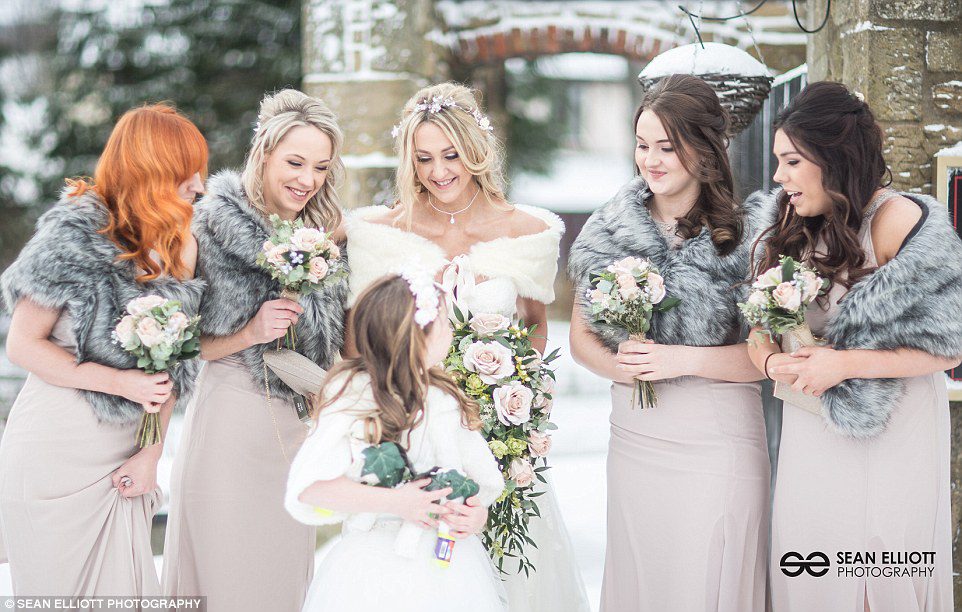 Another picture of Jemma with her bridesmaids sharing a joke with one of the little girls at her wedding. Despite some guests who were coming up from the south having to abandon their journeys, the wedding went ahead and was one of the only ceremonies to take place in the area that day, according to the registrar 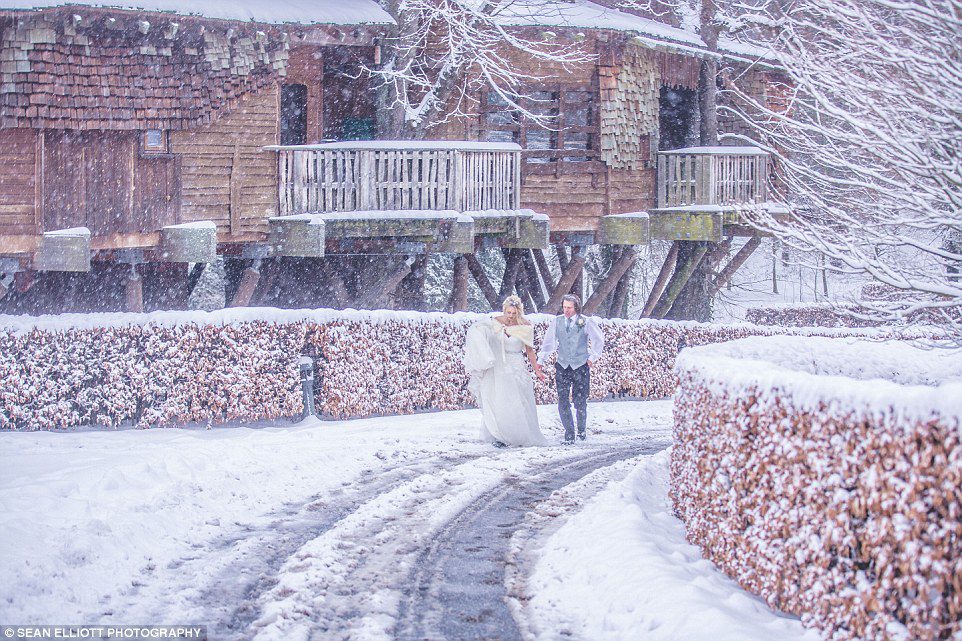 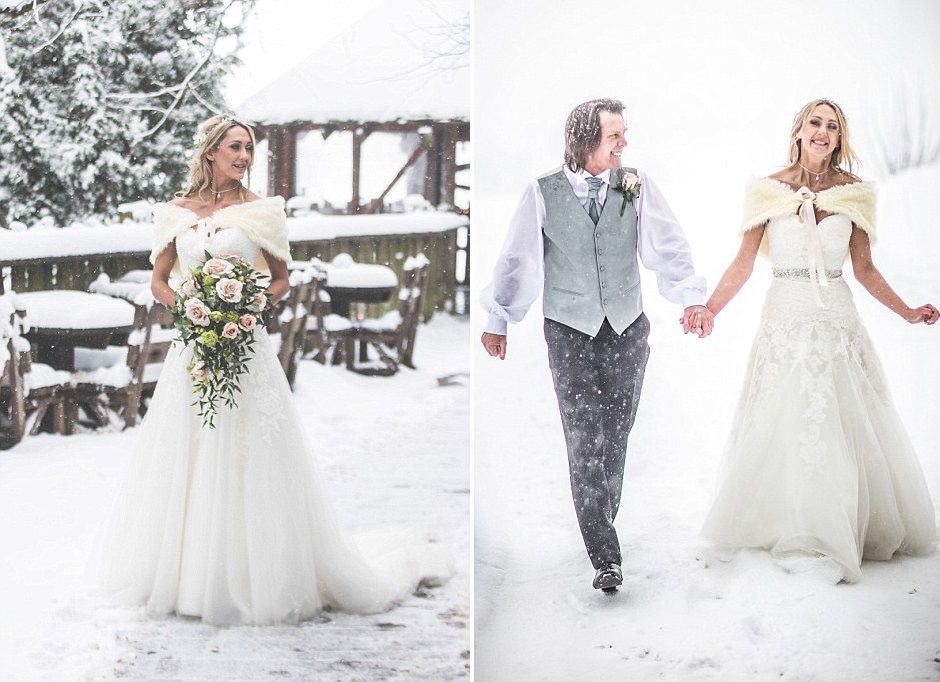 Jemma posing for a picture while holding the bouquet in the snow (left) and Jemma and Steven making their way through the snow (right). Despite having a few hiccups at the start of the day, the couple managed to tie the knot and even the local radio station sent out a message of support for the happy couple 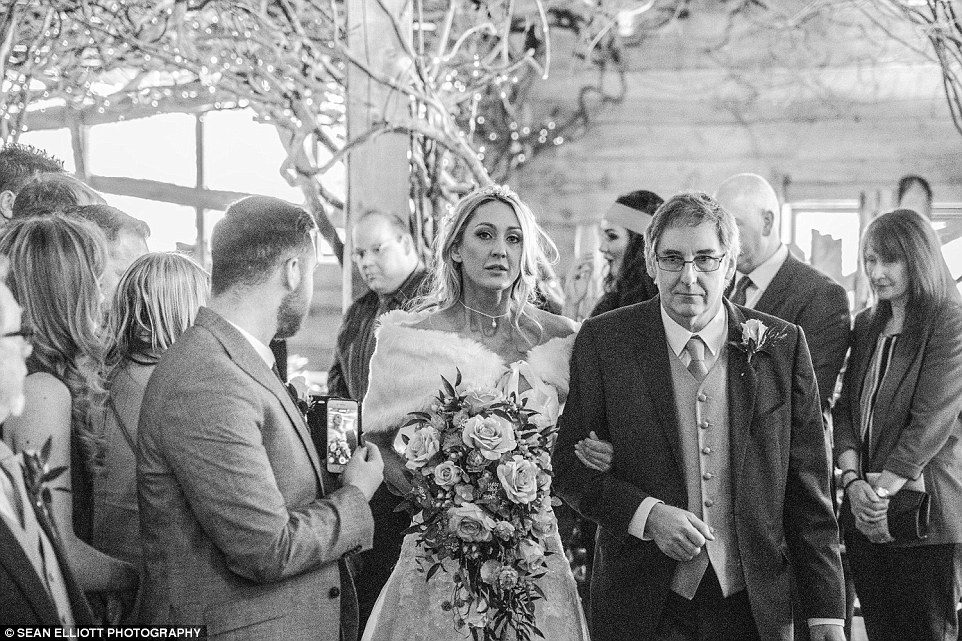 Jemma being walked down the aisle as one of the guests takes a picture of her on her special day. Thankfully it appears the ceremony was held inside, giving guests a slight respite from the freezing cold temperatures outside 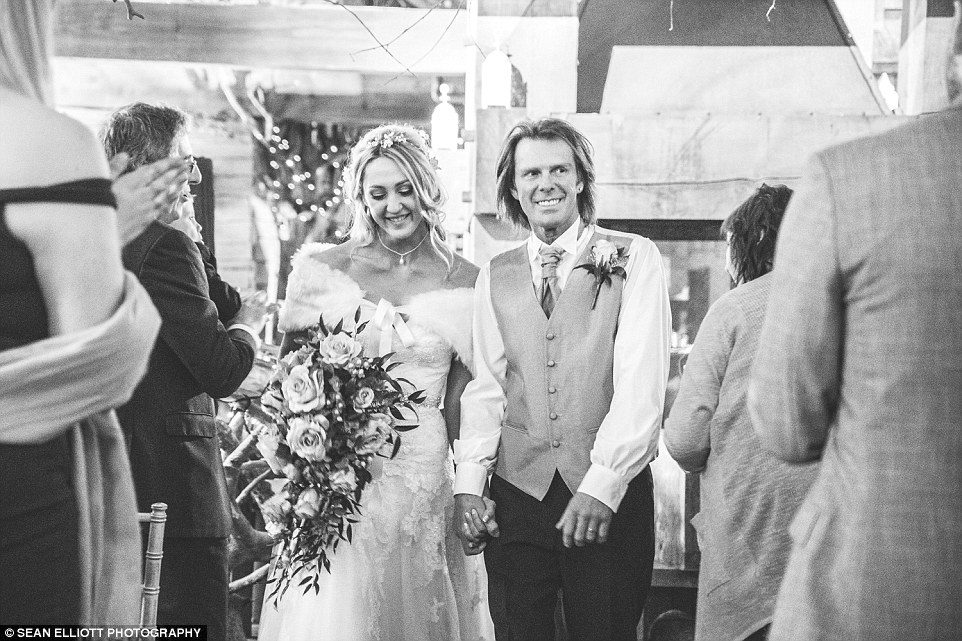 Steven and Jemma walking out of their ceremony shortly after they tied the knot. The pair could not look happier as they are clapped out the venue 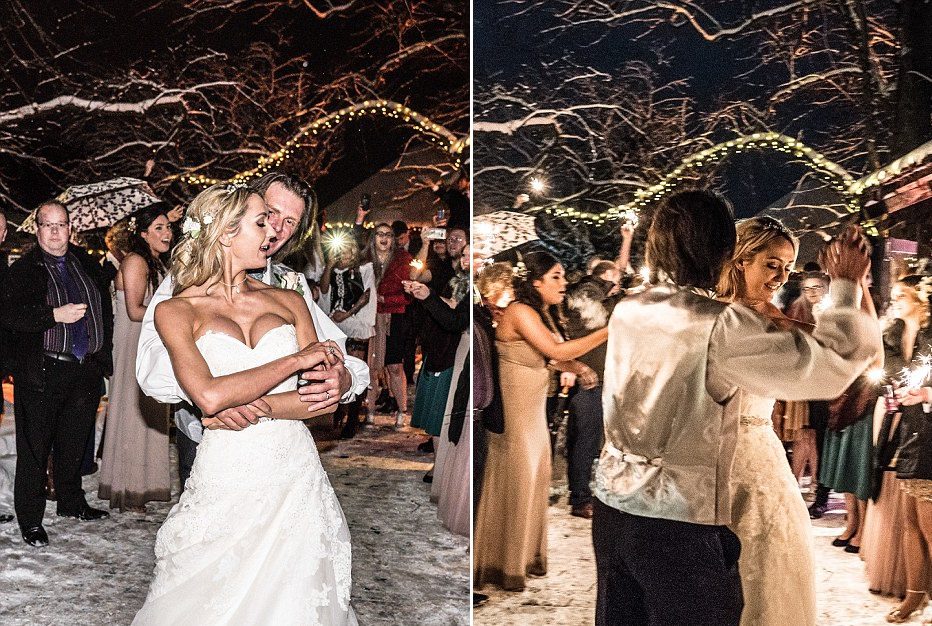 The happy couple shares a loving embrace inside the venue (left) and enjoys a dance together while friends and family look on (right). The brilliant images were taken by wedding photographer Sean Elliott, who is based in the Biscuit Factory, Newcastle. Sean’s image of Storm Ophelia in 2017 went viral and was listed by Huffington Post as one of the best weddings images of 2017 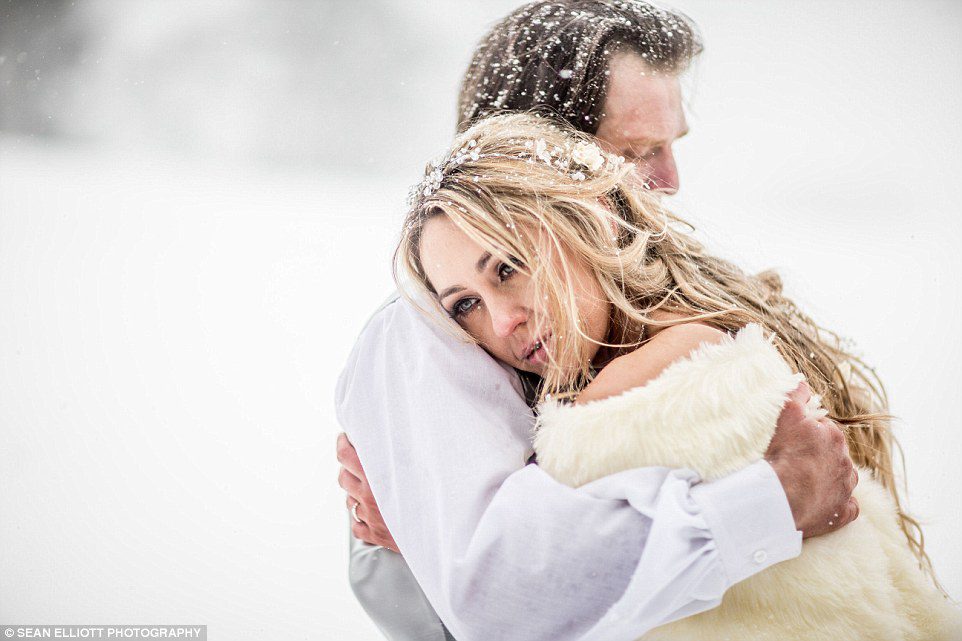 A brilliant photograph of the newly married pair embracing one another out in the elements. The pair seem completely oblivious to the snow which has fallen on their hair as they share a loving hug 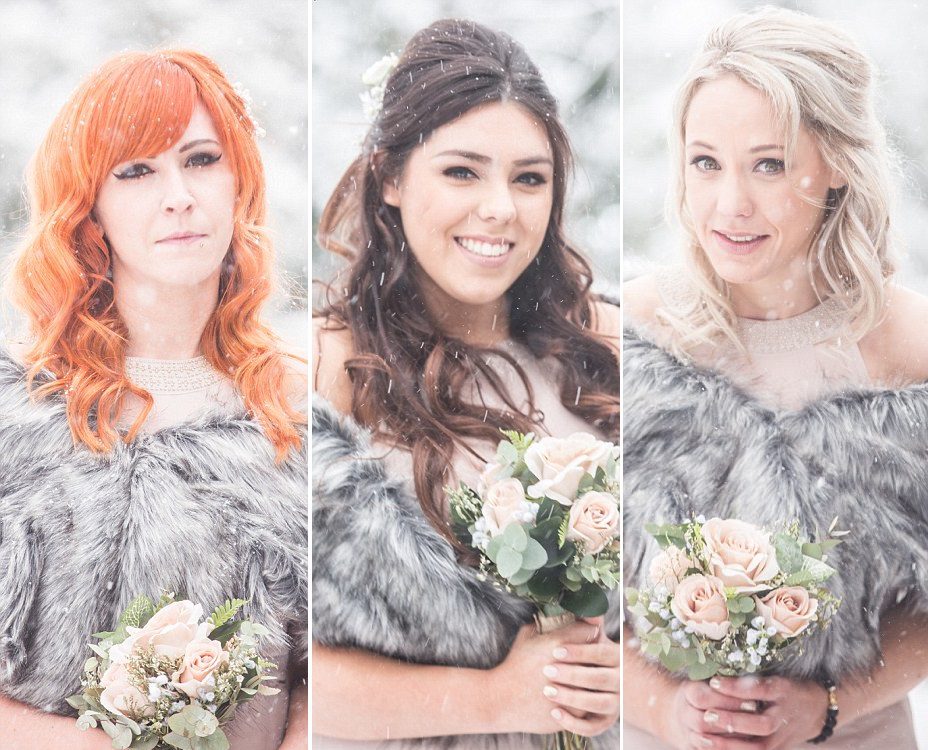 All of the guests at the wedding come together for a photograph outside the venue. Some of the guests throw snow up into the air and at the camera while another on the far right of the shot takes a tumble into the ground, undoubtedly covering himself in the snow in the process 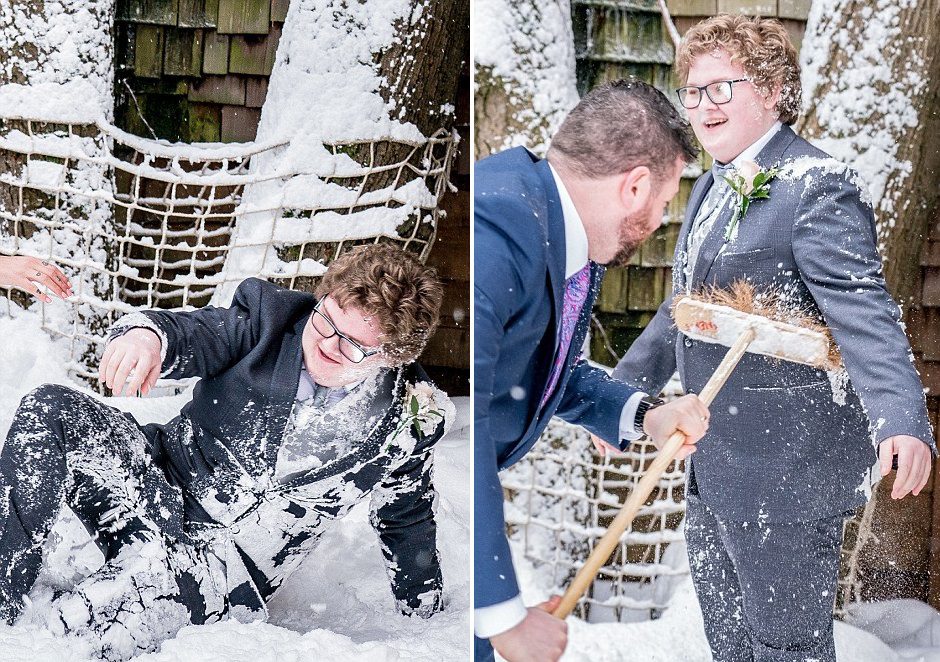 After taking a heavy tumble into the snow, this guest’s suit brushed down after it was covered in snow. It does not appear that he is too bothered as he manages to keep a brave face and smile 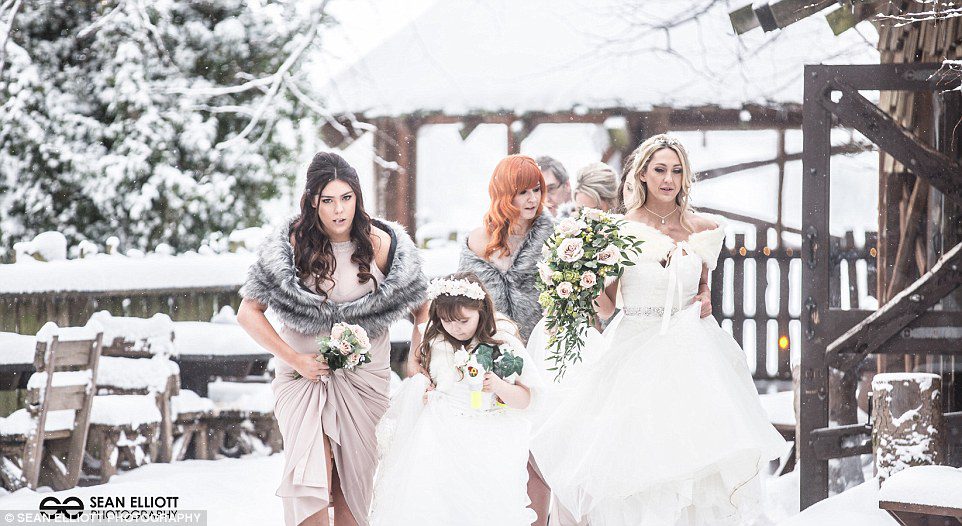 Jemma and her bridesmaids hurry through the snow.

The wedding was held at The Alnwick Garden treehouse. Its website reads: ‘Always featuring local fish and seafood, meats from Northumberland’s farmlands and other regional specialties, the Treehouse Restaurant menus highlight local quality, taste, and change throughout the seasons. There’s a great wine list, a good range of beers and regular live music’ 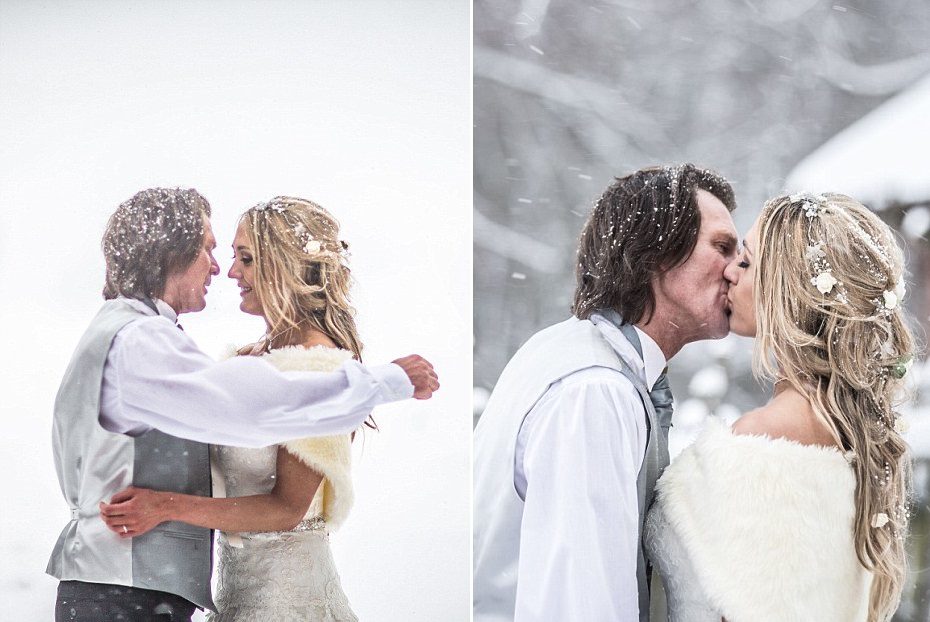 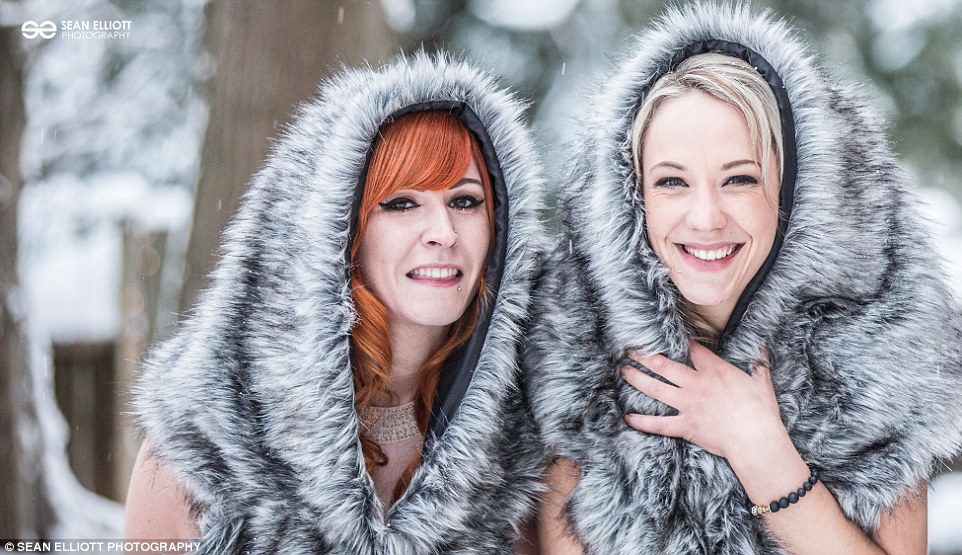 These two guests do not appear to be suffering too much from the cold conditions as they smile on Steven and Jemma’s bid day. Undoubtedly the grey, woolly hoods around both of their heads are helping to keep them both warm as snow lashes down from above 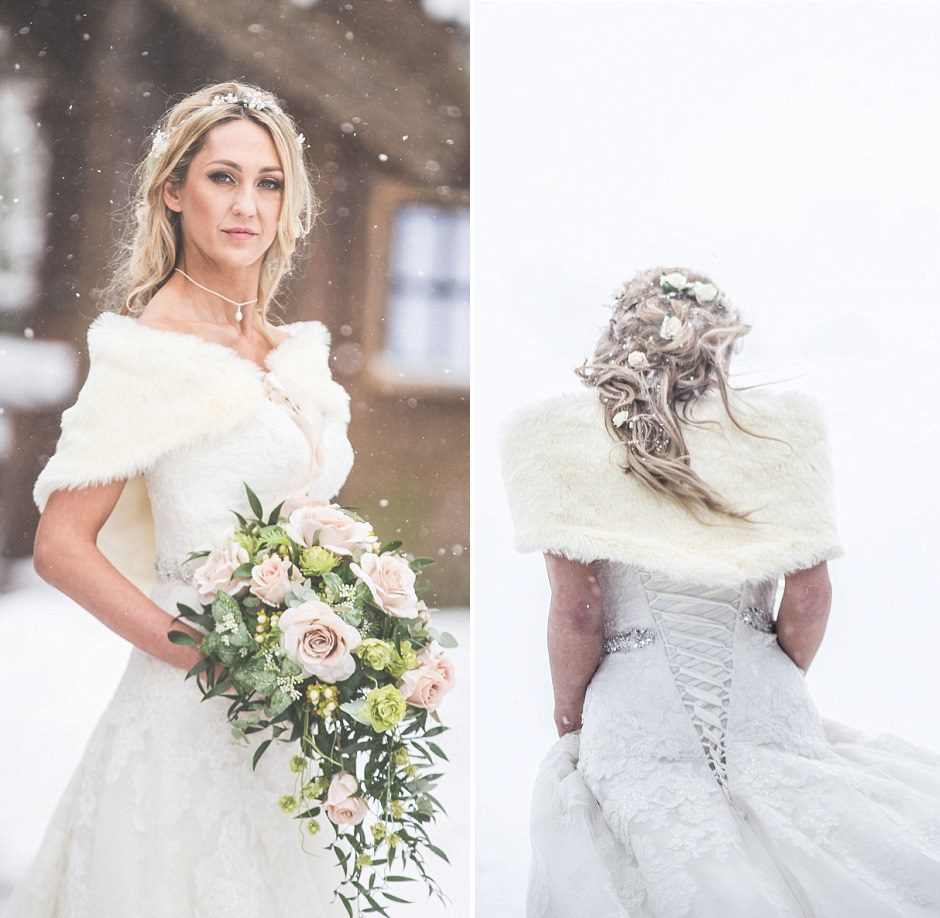 A striking image of Jemma looking straight into the camera on her wedding day (left). Jemma walking into the white background, as snow falls on her hair. She had flowers intertwined with her hair for her special day