The unidentified 31-year-old Hispanic man died after developing sepsis when his fresh tattoo wound became infected from swimming in the sea.

The man ignored the advice given to those with new inkings that they should wait for two weeks before venturing into pools or oceans. However, he decided to venture into the warm waters in the Gulf of Mexico just five days after obtaining a religious cross on his right calf.

Because his wound was still fresh, it became contaminated with a flesh-eating bacteria that tore chunks out of his skin and ultimately led to his death.

The unidentified 31-year-old ignored the advice given to those with new inkings that they should wait for two weeks before venturing into pools or oceans. He caught a flesh-eating bug that ultimately led to his death by triggering sepsis

The man developed a fever, chills and a red rash close to his tattoo a day after he went swimming. His condition continued to worsen over the next couple days before he was eventually admitted to the hospital.

Doctors were concerned about the patches on his legs which had turned purple seen in many infections.

They immediately suspected the Vibrio vulnificus bug was responsible because the man already suffered from cirrhosis, which was caused by the man’s daily habits of drinking six 12 fl oz.  bottles of beer daily. 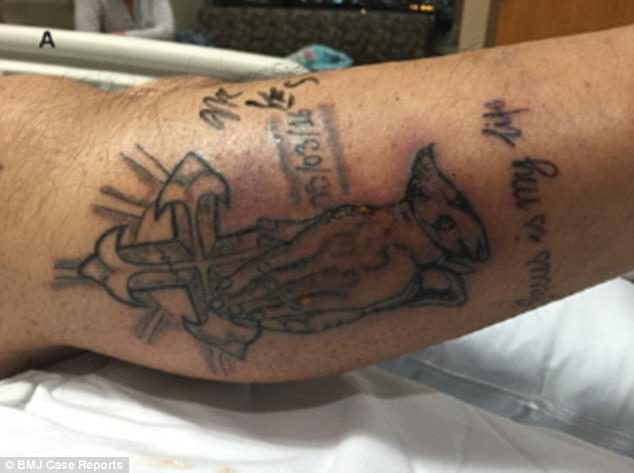 The day after he went swimming, he developed a fever, chills and a red rash close to his tattoo, experts wrote in the BMJ Case Reports

Experts said, he was deemed at high risk of catching such an infection, because of his weakened liver. It is believed that patients with the chronic liver disease have low amounts of neutrophils;  white blood cells that help to fight bugs. He was given antibiotics to help fight the deadly bacteria, which kills around 60 percent of those who catch it.

After just 24 hours of being admitted to the hospital, doctors were forced to place him on a life support machine as his organs began to fail. The septic shock is triggered when an infection sparks a violent immune response, in which the body attacks its own organs.

But his body succumbed to septic shock just two weeks later while he was still receiving care, causing his kidneys to fail completely. He died two months after he was admitted to hospital.

The authors wrote that this method of being infected is the least common, with it happening more often through the ingestion of raw oysters. They said patients with chronic liver disease should be instructed to avoid both possible methods of catching the bug as well as waiting for at least two weeks before going swimming, but others ask to give the wound a little longer to heal.

When you submerge open sores in water, whether it is a pool, bath or seawater poses a threat of infection, experts warn.