A glamorous company director, who ‘has it all,’ has released candid photos to highlight the grim reality of living with cancer.

One image shows mother-of-two Ruth Naylor, 32, slumped in bed with a bucket while another reveals her holding her head in her hands while enduring chemotherapy.

Ms. Naylor, from Hale, Greater Manchester, was diagnosed with a rare form of Hodgkin lymphoma – cancer of the lymphatic system – in August this year.She blamed her exhaustion on working full time and raising her two young children alone

She said: ‘On paper, I have it all. A beautiful home we built ourselves, two gorgeous children and a brilliant career.

‘When I’m in my hospital gown, I’m no different to anyone else. Just another woman desperate not to die.

‘I think we’re obsessed with portraying a perfect persona, but cancer really teaches you humility.’

Ms. Naylor, who is five weeks into her chemotherapy and has an unclear prognosis, is documenting her cancer battle on Instagram, in a bid to help other sufferers. 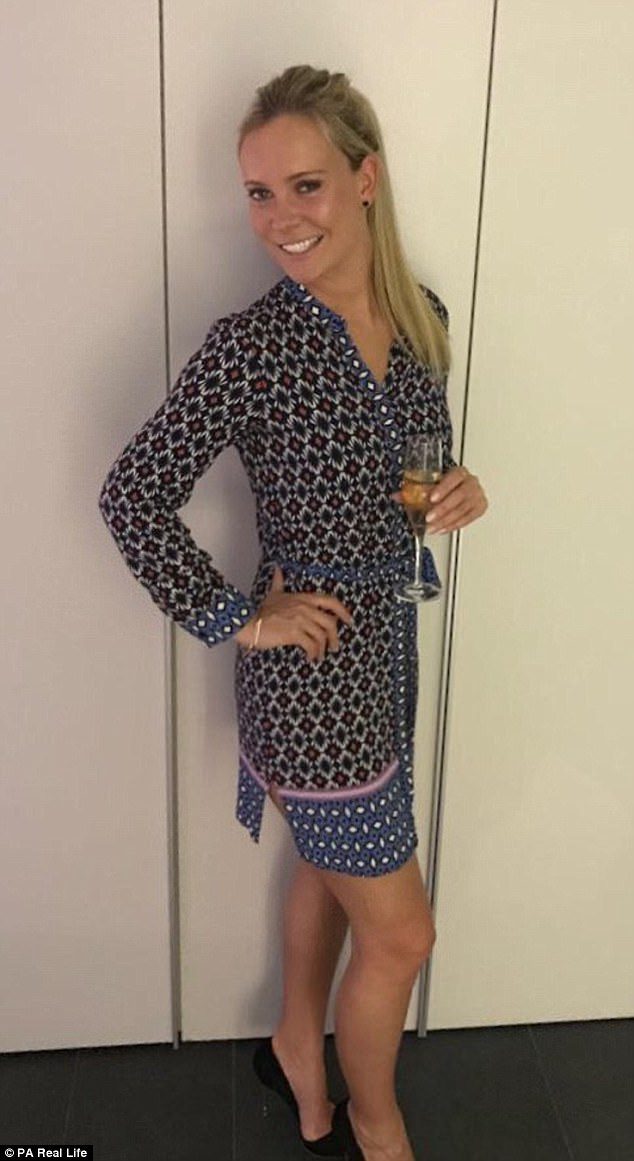 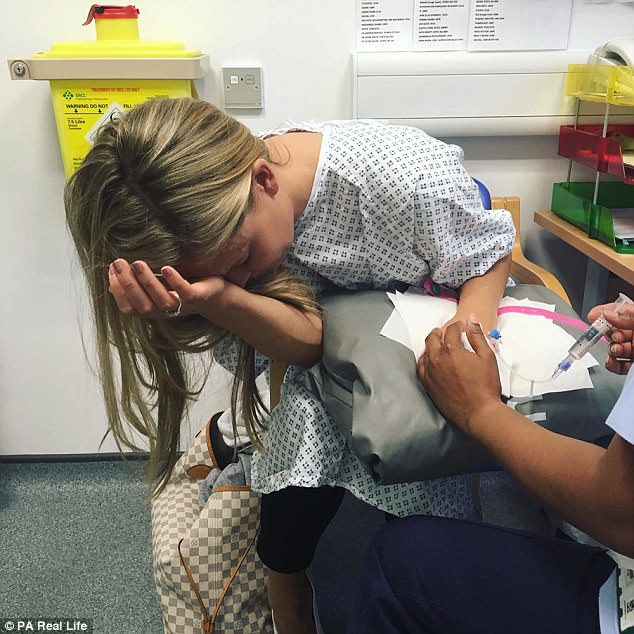 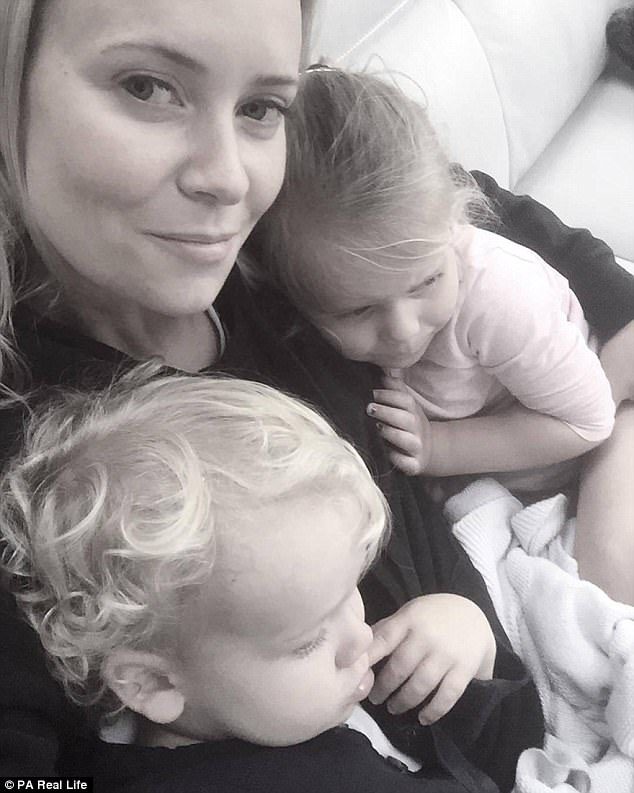 She suffers from Hodgkin lymphoma (pictured with her children Eva, four, and Oscar, two) 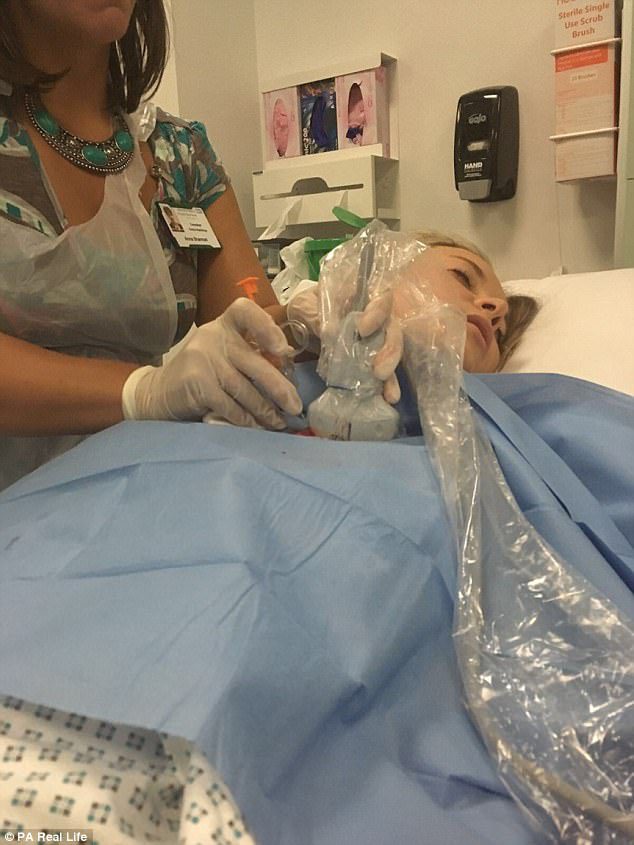 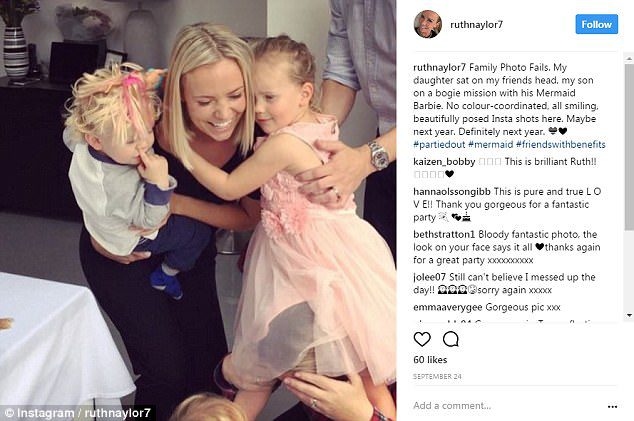 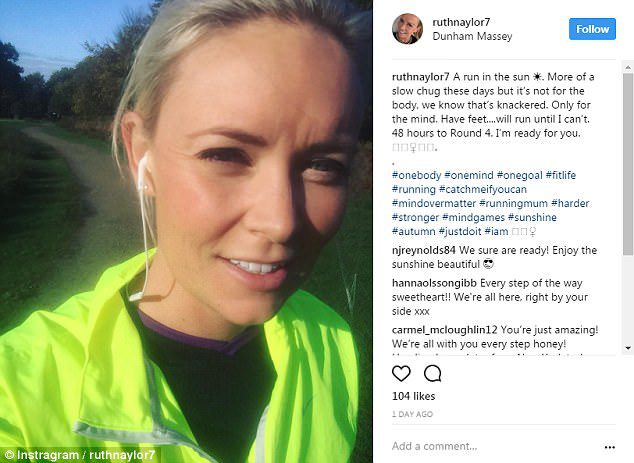 Posted 48 hours before her next chemo round, Ms Naylor insists she will ‘run until I can’t’ 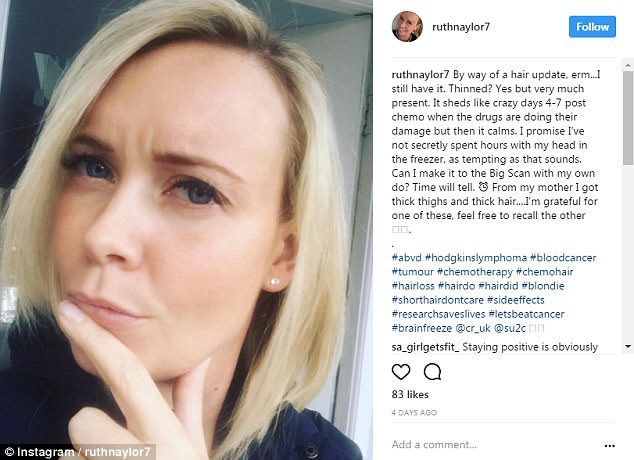 In a light-hearted post, Ms Naylor jokes about her thinning hair, unsure if it will stick around

‘Dying is not an option for me’

Ms. Naylor said: ‘I didn’t want to have the same conversation hundreds of times, so I posted an update on my Instagram and the response from my friends has been unreal,’.

‘Most of my friends and family have been angry on my behalf, but I think I can’t start thinking, “Why me?” Instead, it’s more a case of, “Why not me?”

‘One in two of us will get cancer at some stage in our lives and someone has got to be that one.’

‘On paper, I have it all. A beautiful home we built ourselves, two gorgeous children and a brilliant career.

She said: ‘But, after a cancer diagnosis, instantly, you are faced with losing everything and your perspective on everything changes.

‘I think we’re obsessed with portraying a perfect persona, but cancer really teaches you humility.

‘When I’m in my hospital gown, I’m no different to anyone else. Just another woman desperate not to die…

‘When I’m in bed at night and the house is quiet, I can’t help wondering how it will all end.

She said: ‘I ask myself, “What if I don’t wake up in the morning and the children are left without a mum?”

‘But dying is not an option for me. Throughout this process, I have been as mentally strong as I can be, and I really hope that helps get me though.’ 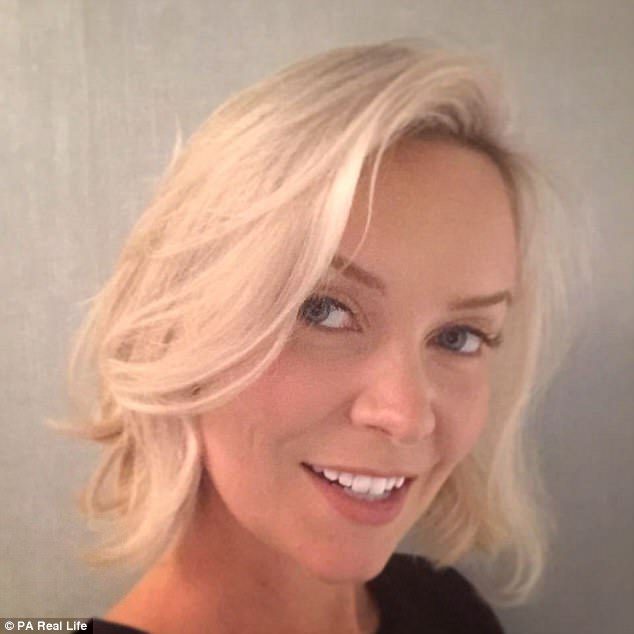 Ms. Naylor is posting images of her chemotherapy journey on Instagram to inspire others 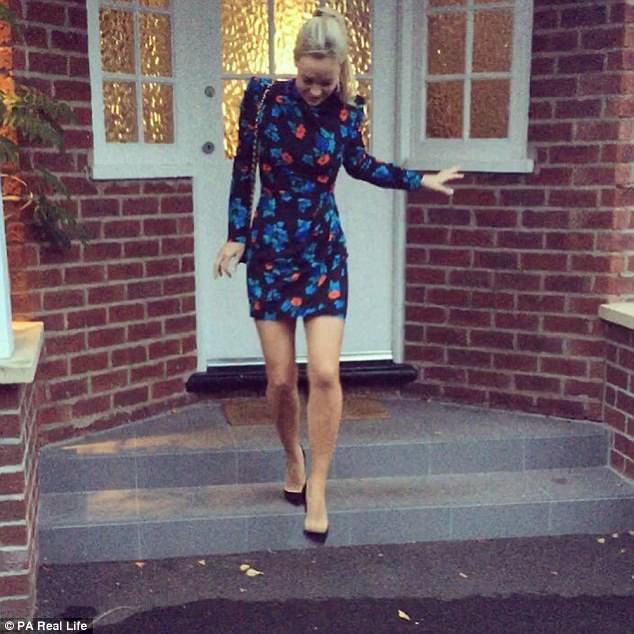 When in bed at night and the house is quiet, she wonders if her children will lose her Ms. Naylor is trying to stay as mentally strong as she can to assist her in overcoming cancer GETTING BY WITH A LITTLE HELP FROM HER FRIENDS

Although Ms Naylor is enduring gruelling chemotherapy with no promise of a positive outcome, she insists she is ‘using the time to laugh’.

She took to Instagram earlier this room to share a photo of her and her best friend reminiscing about their younger selves while she spent all day in a room being infused with ‘highly-toxic chemicals’.

Describing the visit as ‘the best medicine’, Ms Naylor ends the post saying you can’t beat laughing about unrepeatable stories with an old friend, but adds she can beat cancer. Ms. Naylor posted a photo earlier this month laughing with her best friend during chemo

As well as teaching her ‘humility’, Ms Naylor says cancer has made her appreciate the simple things in life, such as a heartfelt letter from an old friend.

In an Instagram post last month Ms Naylor shared ‘a window to the past, full of mischief, misdemeanour and lessons learnt’.

She urges her followers to spend a minute appreciating how lucky they are, ‘then go make some memories’. 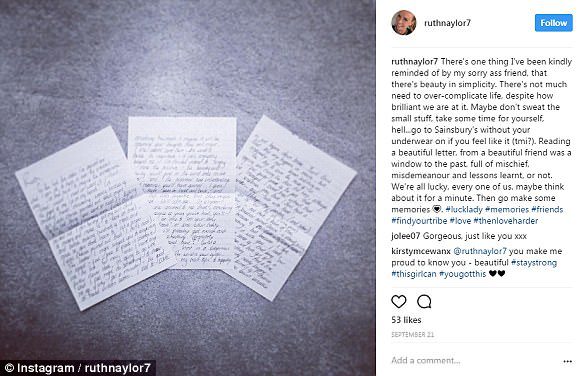 Ms Naylor first visited her doctor in August this year after suffering flu-like symptoms and shortness of breath for eight weeks.

She initially blamed her exhaustion on her busy life as a full-time working mother to her children, Eva, four, and Oscar, two, who she raises herself after a recent split from her husband.

Ms Naylor said: ‘I’d seen the doctor a fair bit with my children, so, as soon as I went in there she could tell I wasn’t right. I looked rough and wasn’t my normal bubbly self.’

At the University Hospital of South Manchester, an X-ray revealed what looked like a clot on her right lung, as well as abnormal blood tests.

After being given blood-thinning injections, doctors wanted to investigate further and asked Ms Naylor to return for a more detailed CT scan the next day.

She said: ‘That’s when everything changed for me. My whole world seemed to stop turning.

‘I had a wonderful life; a beautiful five-bedroom home in a lovely village, that me and my husband built ourselves, with the help of an architect.

‘And we always had five holidays a year.

‘But none of that mattered when the doctor said I had an abnormal mass in my chest, something they believed to be cancer.’ Ms. Naylor worried she would be like her mother who died at just 47 from cancer of the liver Her prognosis is unclear, with doctors being unable to answer whether she will survive She must endure six months of grueling chemotherapy, possibly followed by radiotherapy 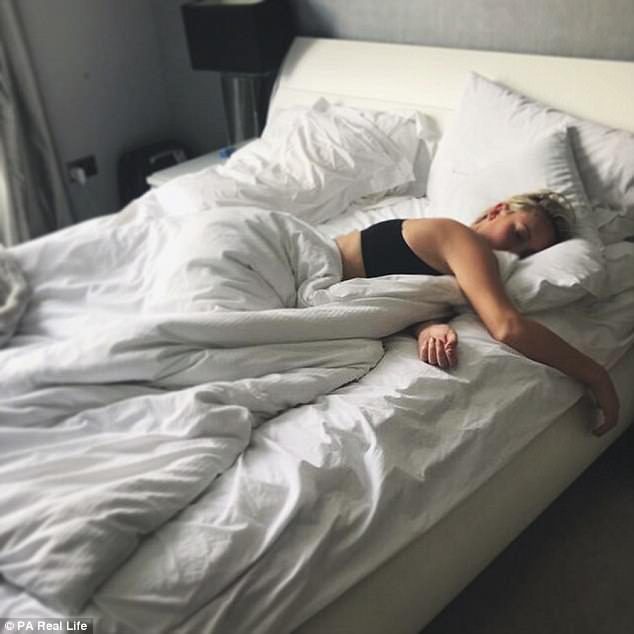 Her mother was too ill for chemotherapy but Ms. Naylor had to start her treatment immediately Ms. Naylor’s thoughts quickly raced back to the early death of her mother, Louise, at just 47, five weeks after being diagnosed with liver cancer.

She said: ‘I was only 21 when my mum died, so when I was told I had cancer, I thought about my young children and how would they cope without me.’

The next day, Ms. Naylor had a CT scan and more blood tests.

She said: ‘They found a tumor intertwined between my lung and my heart. I really felt like there was going to be no turning back from that point.

‘I asked, “Am I going to live?” They couldn’t even answer me that.’

It was not until a PET scan, which examines body tissues, a week later that Ms. Naylor was told she had rare stage 2 B Hodgkin lymphoma.

Transferred to The Christie cancer hospital, in Withington, Ms. Naylor heard she would need six months of grueling chemotherapy, possibly followed by radiotherapy.

She said: ‘My mum never got to the stage of having chemo, as she was so unwell, so I don’t know anyone who has ever had it.

‘Cancer doesn’t discriminate. I had no time to wait, so my treatment happened really quickly after my diagnosis.’