The four-year-old daughter of Tony-winning actress Ruthie Ann Miles and a one-year-old boy have been identified as the children hit and killed by a woman who ran a red light in Brooklyn on Monday.

At around 12:40 pm on Monday, 44-year-old Dorothy Bruns of Staten Island was driving in Park Slope, Brooklyn when she ran a red light and hit and killed one-year-old Josh Lew and four-year-old Abigail Blumenstein.

The deceased little girl is the daughter of Ruth Blumenstein, the theater actress known as Ruthie Ann Miles, who won a Tony Award in 2015 for her role in ‘The King and I.’

Both the Tony winner and Lauren Lew, the mother of the boy who died, sustained injuries. A fifth victim was also taken with the mothers to the New York Presbyterian Methodist Brooklyn Hospital for treatment.

Blumenstein and Lew appear to be friends. In her acceptance speech for the Tony three years ago, Blumenstein gave a shoutout to ‘the Lews’.

‘I could fall and never hit the ground because of the amazing women who are my friends behind me,’ she added. 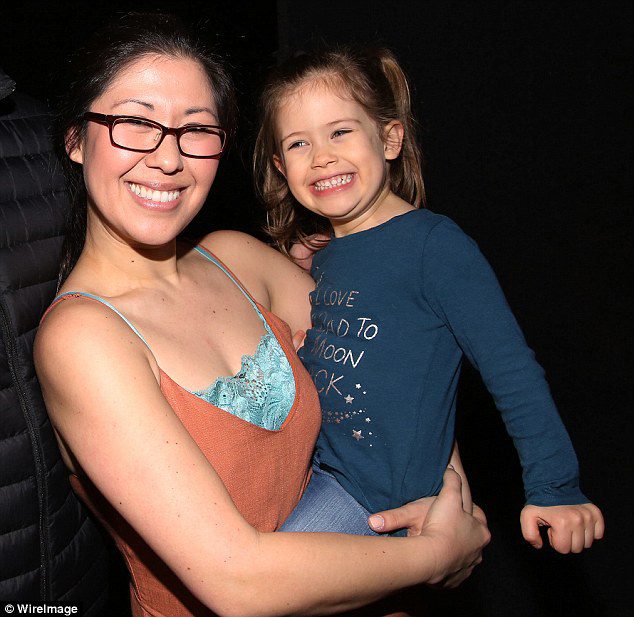 The 4-year-old daughter of Tony-winning actress Ruthie Ann Miles and a 1-year-old boy have been identified as the children hit and killed by a woman who ran a red light in Brooklyn on Monday; Ruthie Ann Miles is seen here with her daughter in New York City in 2017 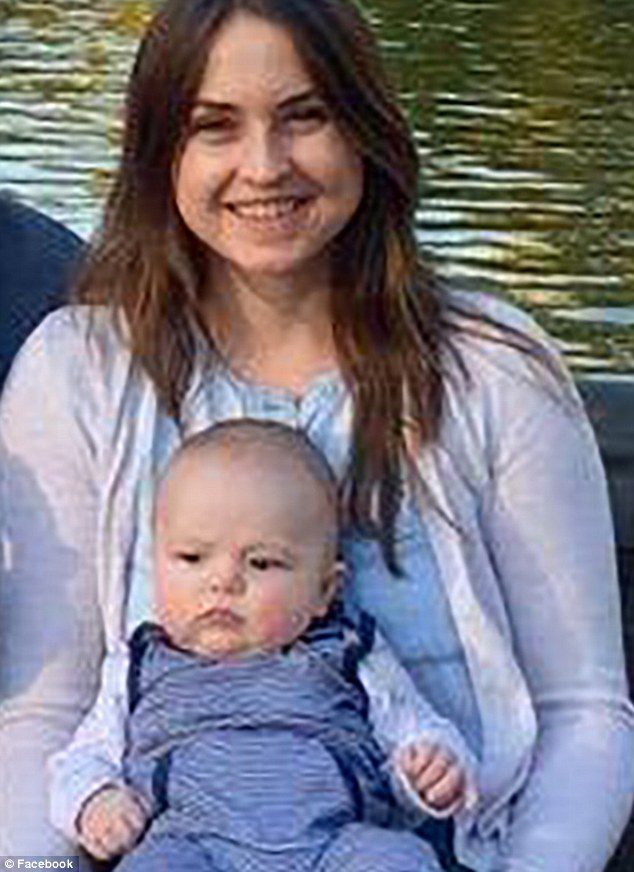 Lauren Lew is shown above, holding her one-year-old son Josh 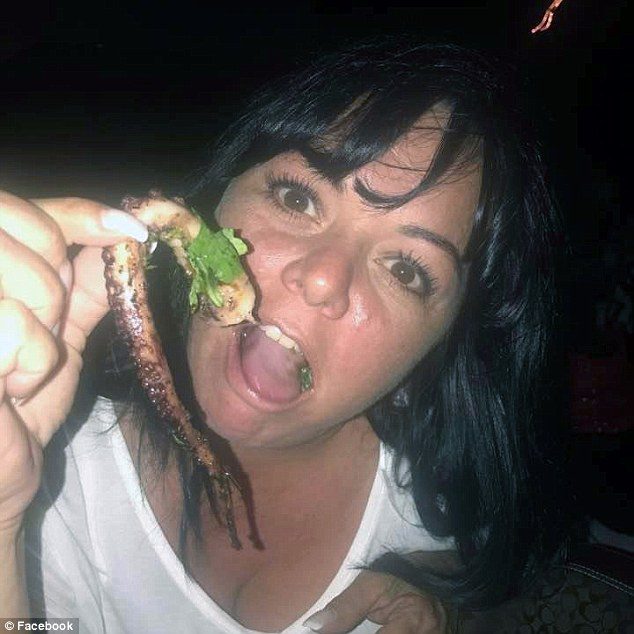 At least one of the adults was described by a witness as being a pregnant woman who sustained critical injuries.

One witness described to the New York Post how Lew tried to save her son immediately after the tragedy unfolded, but it was too late.

‘The mom was sitting there next to him screaming,’ said Andrew Macaluso, 26, who is a fourth-year medical student. 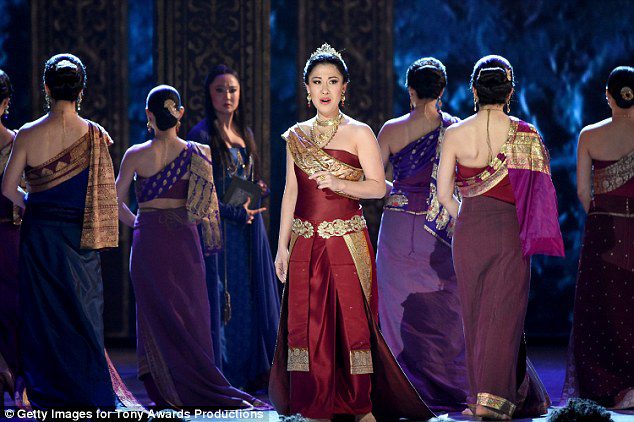 Ruthie Ann Miles and the cast of ‘The King and I’ perform onstage at the 2015 Tony Awards at Radio City Music Hall on June 7, 2015, in New York City Ruthie Ann miles also appeared on the last season of the FX show The Americans. Pictured on the right with co-star Keri Russell 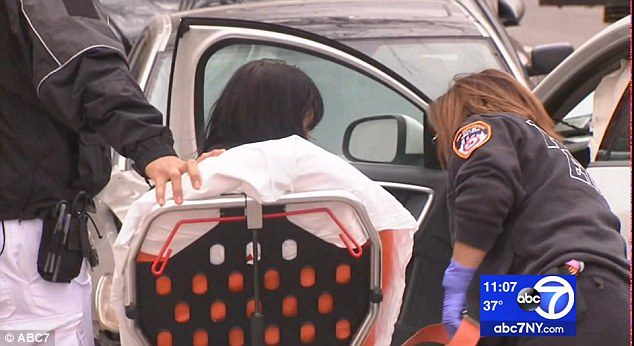 Dorothy Bruns, 44, of Staten Island who police say ran a red light in Brooklyn, New York and killed two children is seen here being attended to by EMT personnel on Monday

‘She was just kind of [saying], “Oh, God, this can’t be happening. Tell me this isn’t happening. What’s going on?”‘ Macaluso said.

He went on to detail their efforts over the next several minutes, as they tried to revive her little boy.

‘The child had blood on his face,’ Macaluso said. ‘She wipes off his face and gives him air while I’m giving him chest compression.’

Then paramedics arrived and took the victims away. The white Volvo is seen here approaching the crosswalk without decreasing in speed, in a slowed down version of surveillance footage that captured the moments before impact 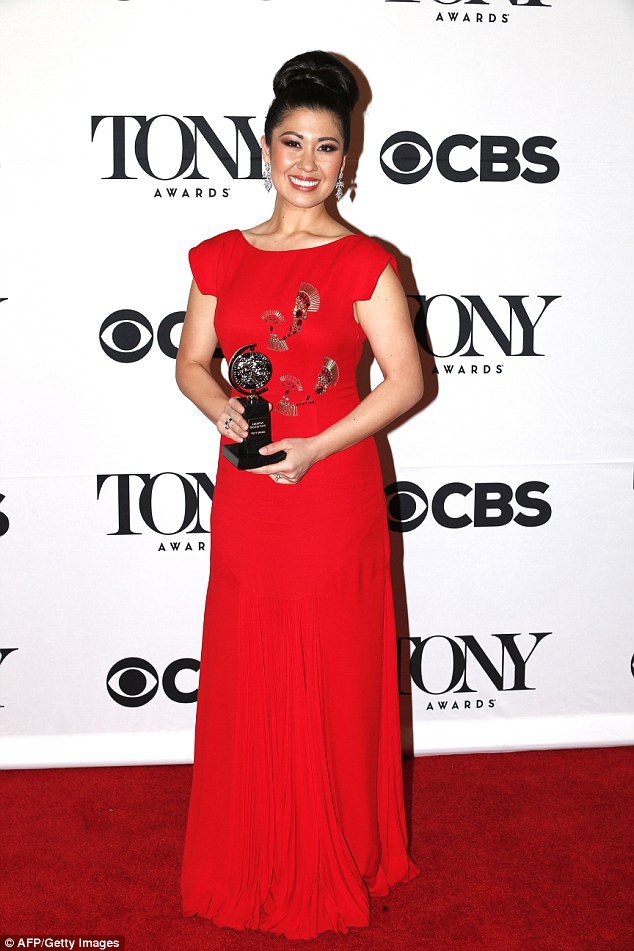 Ruthie Ann Miles poses backstage with her award for the best-featured actress in a musical for her performance in ‘The King and I’ during the American Theatre Wing’s 69th Annual Tony Awards at the Radio City Music Hall in New York City on June 7, 2015 Phillip Boykin, Ruthie Ann Miles, and David Turner during the opening night performance curtain call bows for ‘Sunday in the Park with George’ at the Hudson Theatre on February 23, 2017, in New York City

Moments before, the two kids and their mothers had just gotten off the bus and were crossing the street when a woman driving a white Volvo sped through the intersection at 9th Street and Fifth Avenue in Park Slope, striking the families.

At first, the driver tried to speed away, dragging the stroller that the boy was being pushed in behind her for half a block until she crashed into some parked cars on the opposite side of the street and came to a stop.

‘The kids were run straight over, and the driver tried to get away and hit a car,’ one anonymous witness told the Post.

‘I don’t even want to think about this. … Just to know those kids were running down like a dog.’ Lauren Lew and her husband Charles are pictured with their two sons above on a recent vacation to Hawaii. Baby Josh is being held by his father. Josh passed away on Monday in the accident 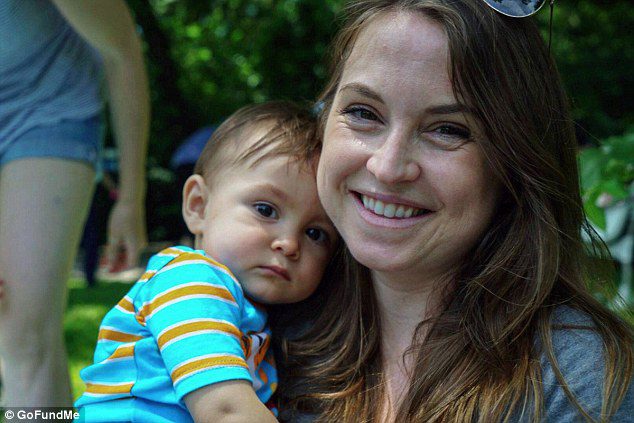 Above, another picture of Lauren Lew with one of her sons. The photo was shared to GoFundMe Dorothy Bruns of Staten Island, 44, hit and killed a one-year-old Josh Lew and four-year-old Abigail Blumenstein at 12:40pm, in the neighborhood of Park Slope, police say 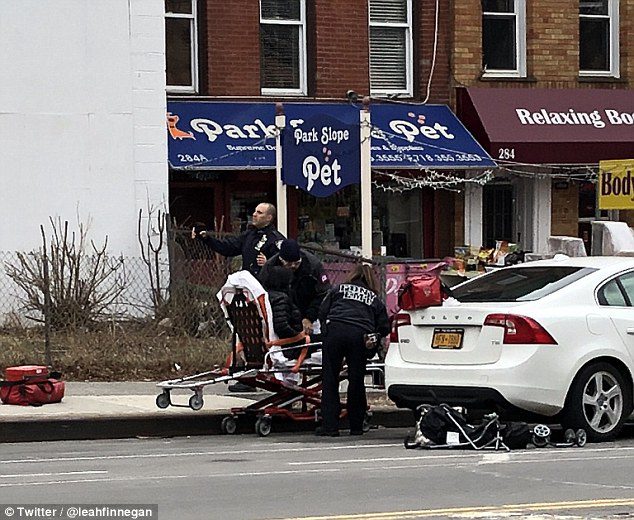 The driver of the white Volvo told officers she has medical issues; Above, Bruns is put on a stretcher near where the car came to a stop

The children were pronounced dead at the scene while their mothers and a fifth unidentified victim were taken to the hospital.

The driver, identified as Bruns, told police that she had medical issues and was taken from the scene to undergo toxicology tests.

Witness Jennifer Muñiz, 28, told the New York Daily News that the driver seemed unaffected by the deaths and injuries she had just caused when EMTs removed her from her vehicle. 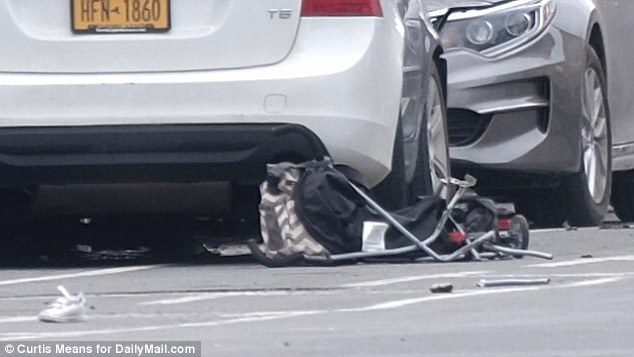 The stroller that was carrying the now deceased Josh Lew is seen here, pinned under the wheel of the Volvo that police say was driven by Dorothy Bruns, 44, of Staten Island ‘When they took her out she was just standing there, like nothing,’ Muñiz said. ‘No emotion. Not sad. Not crying. Not asking questions: “Is everybody alright?” Not shaking. Nothing.’

After she was set on a stretcher, the first responder checked Bruns’ vision, and then gave her telephone and handbag to her.

‘She was texting on her cell phone like nothing happened,’ Muñiz said. ‘Like she had just parked the car.’ 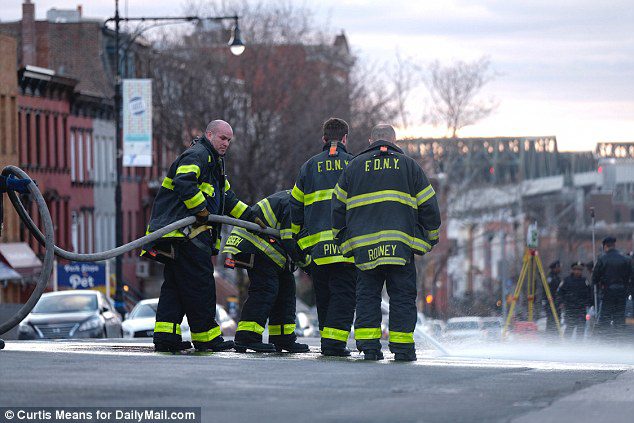 At first, the driver tried to get away, but she eventually came to a stop when she crossed into oncoming traffic and cars parked cars Mayor Bill de Blasio said a full investigation was underway regarding the tragedy.

‘For [my wife] Chirlane and I obviously this is very personal. It occurred in our neighborhood, very, very close to our home,’ de Blasio said, at City Hall.

‘This loss of life is tragic and painful for all of us, particularly those of us who are parents.’

He added: ‘It’s another reminder of why we have to double our efforts on Vision Zero, to work for a day when this never happens to any family. This is an intersection that we happen to know very very well. We have crossed it many times with [our children] Dante and Chiara when they were kids, so this is personal. And we are praying for the families who have gone through this tragedy and we will do everything we can to help them.’

Vision Zero is a New York City initiative that aims to achieve zero fatalities on city streets due to traffic crashes.

According to the fund for the Lews, the couple was living in Brooklyn while Charles Lew finished his residency.

‘They do not have family in the area. They were in the process of looking for an apartment prior to the accident, as their current lease is up. It is our hope that these funds can help alleviate their financial burdens as they prepare to lay their son to rest.

‘While there is nothing we can do or say to bring their boy back, we hope these funds will serve as an expression of the community supporting them during this time,’ friends say on the fund’s website. 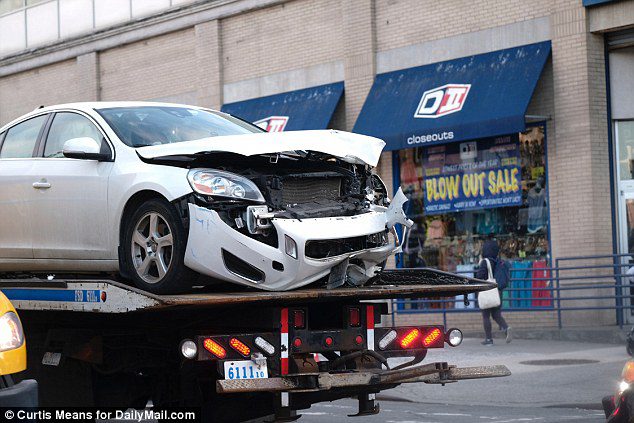 The damage to the white Volvo can be seen here, as the car rests on a flatbed truck 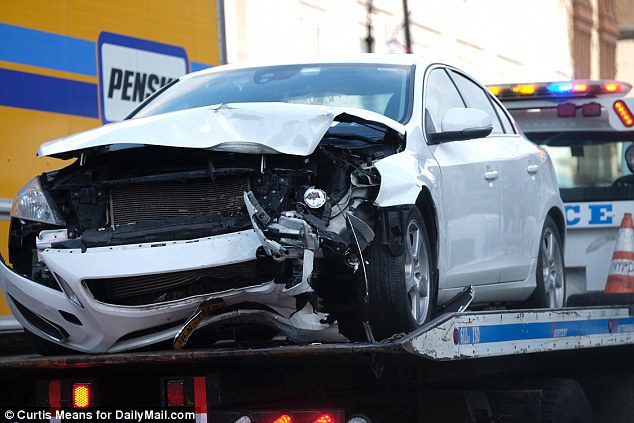