Research has suggested that ‘selfitis’  is the definition of people who are obsessed with the taking of selfies and it appears to be a genuine mental condition.

Psychologists have devised a test you can take to see where you fit on the ‘selfitis’ scale.

The term first began in 2014 as part of a spoof news article claiming ‘selfitis’ was to be deemed a mental disorder by the American Psychiatric Association.

Researchers at Nottingham Trent University and Thiagarajar School of Management in Madurai, India, investigated whether there was any truth in the phenomenon.

When they confirmed that ‘selfitis’ does indeed exist, they tested out a framework for assessing its severity on volunteers. They say there are three categories – ‘borderline,’ ‘acute’ and ‘chronic.’

‘Borderline’ selfitis occurs when people take selfies at least three times a day and do not post them on social media.

If someone is classified as ‘acute’ they take many pictures and actually post them online.

A ‘chronic’ selfie-taker is when you feel an uncontrollable urge to take photos of yourself around the clock, posting them to Facebook and Instagram more than six times a day. 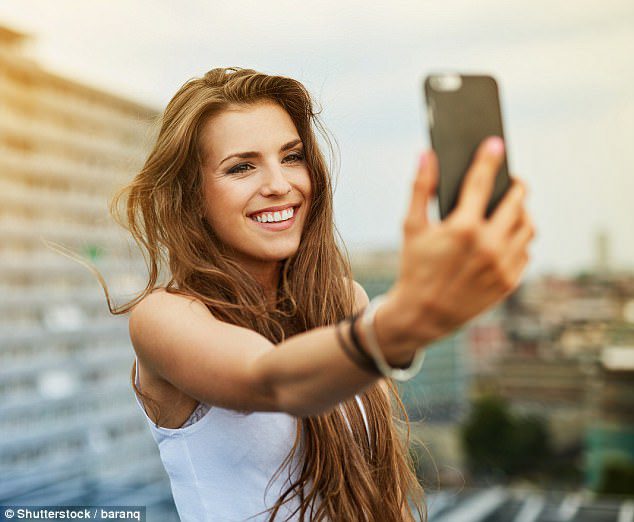 Researchers devised a test so you can find out if you have ‘borderline’, ‘acute’ or ‘chronic’ selfitis

Dr. Mark Griffiths from Nottingham Trent University said: ‘This study arguably validates the concept of selfitis and provides benchmark data for other researchers to investigate the concept more thoroughly and in different contexts.

‘The concept of selfie-taking might evolve over time as technology advances, but the six identified factors that appear to underlie selfitis in the present study are potentially useful in understanding such human-computer interaction across mobile electronic devices.’

How the research was carried out:

The scale runs from one to 100, was compiled after tests on focus groups with 200 participants that looked at what factors drove the condition of selfitis.

The team then surveyed 400 participants.

The research was published in the International Journal of Mental Health and Addiction, took part in India, the country that has the most Facebook users,

According to research published in July, India has had the highest number of selfie-related deaths, where a person dies while trying to take a picture of themselves.

The study looked at figures from March 2014 and September 2016, discovered the country accounted for 60 percent of all such mortalities.

Physiologists found that typical ‘selfitis’ sufferers were attention seekers and often lacked self-confidence. They constantly post images of themselves in the hope that they boost their social credentials.

The paper authors wrote: ‘As with internet addiction, the concepts of selfitis and selfie addiction started as a hoax, but recent research including the present paper has begun to empirically validate its existence.’