A plane passenger is lucky to be alive after traffic made him late for the doomed Lion Air flight that crashed into the sea off Indonesia.

Sony Setiawan, an official in Indonesia’s finance ministry was due to be among the 189 people on board flight JT 610 when it took off early from the capital Jakarta on Monday morning.

But he was held up on his commute to Soekarno-Hatta International Airport because of the city’s notorious road congestion and never boarded the Boeing-737.

Minutes after takeoff, the plane disappeared from radar before plunging 5,000ft into the Java Sea. Officials do not expect to find any survivors.

Setiawan took a later flight to Pangkal Pinang on another airline. Pictures show him surrounded by journalists after arriving safely today. 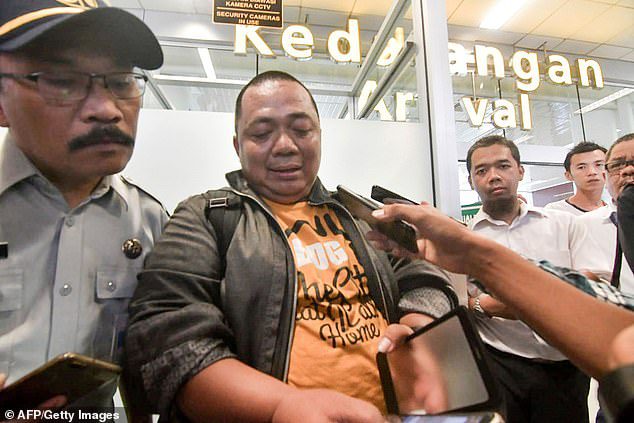 Sony Setiawan was due to be among the 189 people on board flight JT 610 when it took off early from the capital Jakarta on Monday morning. But he was held up on his commute to Soekarno-Hatta International Airport because of the city’s notorious road congestion and never boarded the Boeing-737 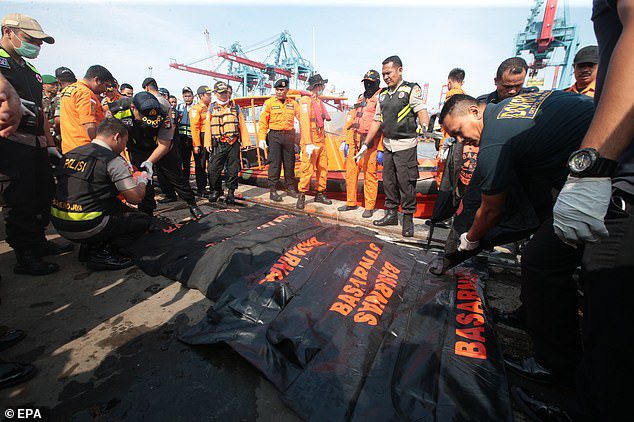 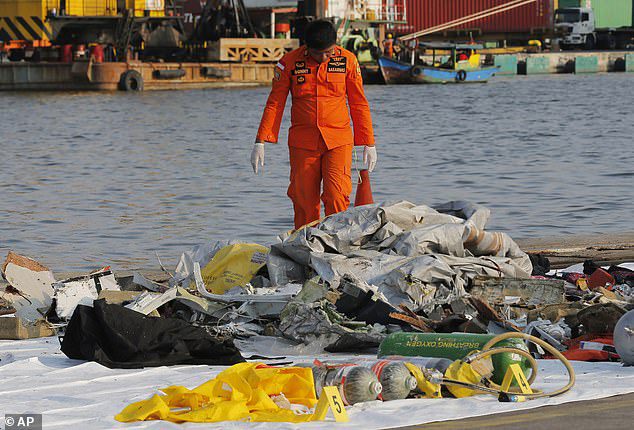 Minutes after takeoff, the plane disappeared from radar before plunging 5,000ft into the Java Sea. Officials do not expect to find any survivors. A rescuer is pictured standing over debris recovered from the scene of the crash

The ill-fated Lion Air flight was a journey he and his colleagues caught on a weekly basis.

But while his friends battled their way through Jakarta’s daily congestion to make the flight, Sony found himself stuck on a toll road for hours.

A sprawling and haphazardly planned megacity, Jakarta is known for having some of Southeast Asia’s worst traffic congestion with lengthy tailbacks and hours-long delays a daily frustrating ritual for commuters.

‘I usually take (flight) JT610 – my friends and I always take this plane,’ Setiawan told AFP.

‘I don’t know why the traffic at the toll road was so bad. I usually arrive in Jakarta at 3 am but this morning I arrived at the airport at 6:20 and I missed the flight.’

But Setiawan said any gratitude he felt was tinged with the knowledge so many people, including six of his colleagues, were not so fortunate.

‘The first time I heard I cried,’ he said. ‘I know my friends were on that flight.’

Setiawan, who is from Bandung in West Java, said he managed to catch the second flight to Pangkal Pinang city and only learned of the crash once he landed safely.

The call he made to his briefly stricken family was filled with emotion.

‘My family was in shock and my mother cried, but I told them I was safe, so I just have to be grateful,’ he said.

The national search and rescue agency said human remains have been recovered from the crash area. Its director of operations, Bambang Suryo Aji, told a news conference the search effort is focusing on finding bodies, and survivors are not expected.

More than 300 people including soldiers, police and local fishermen were involved in the search that has also recovered ID cards, personal belongings, and aircraft debris. At least a dozen ambulances were parked at a nearby beach.

Indonesia’s disaster agency posted photos online of a crushed smartphone, books, bags, and parts of the aircraft fuselage that had been collected by search and rescue vessels.

President Joko Widodo ordered the transport safety commission to investigate and urged Indonesians to ‘keep on praying’ as rescuers search for victims.

An air transport official, Novie Riyanto, said the flight was cleared to return to Jakarta after the pilot made a ‘return to base’ request two to three minutes after taking off. It plunged into the sea about 10 minutes later. Weather conditions were normal but the brand new aircraft had experienced a technical issue on its previous flight. 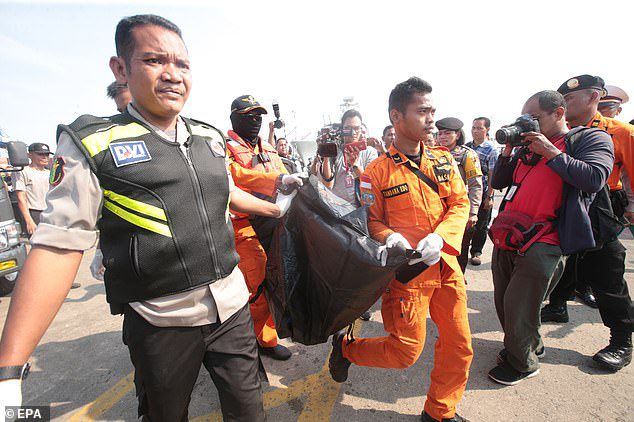 Members of an Indonesian rescue team carry a body bag at Tanjung Priok Harbour, Indonesia, in the wake of the disaster

Lion Air said the jet, on a 1 hour and 10-minute flight to Pangkal Pinang on an island chain off Sumatra, was carrying 181 passengers, including one child and two babies, and eight crew members.

It said there were two foreigners on board the plane: its pilot, originally from New Delhi, and an Italian citizen.

Distraught friends and relatives prayed and hugged each other as they waited at Pangkal Pinang’s airport and at a crisis center set up at Jakarta’s airport. Indonesian TV broadcast pictures of a fuel slick and debris field in the ocean.

Feni, who uses a single name, said her soon to be married sister was on the flight, planning to meet relatives in Pangkal Pinang.

‘We are here to find any information about my younger sister, her fiance, her in-law to be and a friend of them,’ said Feni.

‘We don’t have any information,’ she said, as her father wiped tears from reddened eyes. ‘No one provided us with any information that we need. We’re confused. We hope that our family is still alive.’

Indonesian Finance Minister Sri Mulyani also arrived at the agency and met with its chief, seeking information about 20 ministry staff who were on the flight after attending a ministry event in Jakarta. Photos circulating online showed the distraught minister trying to comfort stunned colleagues. 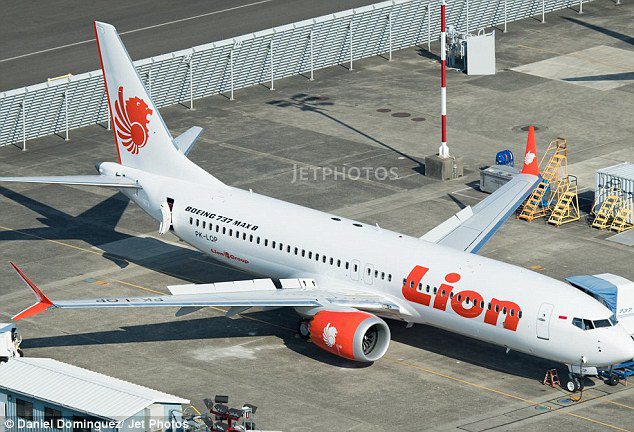 The Lion Air aircraft crashed about 13 minutes after taking off for Indonesia. It is not clear how many people were on board (pictured is the plane)

The search and rescue agency said the flight ended in waters off West Java that are 30 to 35 meters (98 to 115 feet) deep.

The agency’s chief, Muhammad Syaugi, told a news conference that divers are trying to locate the wreckage.

Weather conditions for the flight were safe, according to the Indonesian meteorology agency. It said the type of clouds associated with turbulence was not present and winds were weak.

The Boeing 737 Max 8 was delivered to Lion Air in mid-August and put in use within days, according to aviation website Flightradar24. Malindo Air, a Malaysian subsidiary of Jakarta-based Lion Air, was the first airline to be using the 737 Max 8 last year. The Max 8 replaced the similar 800 in the Chicago-based plane maker’s product line.

Lion Air president-director Edward Sirait said the plane had a ‘technical problem’ on its previous flight from Bali to Jakarta but it had been fully remedied. He didn’t know specifics of the problem when asked in a TV interview. The pilot of Flight 610 had more than 6,000 flying hours while the co-pilot had more than 5,000 hours, according to the airline.

‘Indeed there were reports about a technical problem, and the technical problem has been resolved in accordance with the procedures released by the plane manufacturer,’ he said. ‘I did not know exactly but let it be investigated by the authorities.’

Boeing Co. said it was ‘deeply saddened’ by the crash and was prepared to provide technical assistance to Indonesia’s crash probe.

In a statement, the Chicago-based manufacturer expressed its concern for the 189 people onboard and offered ‘heartfelt sympathies to their families and loved ones.’

The Transport Ministry said the plane took off from Jakarta at about 6:20 a.m. and crashed just 13 minutes later. Data from FlightAware showed it had reached an altitude of only 5,200 feet (1,580 meters). 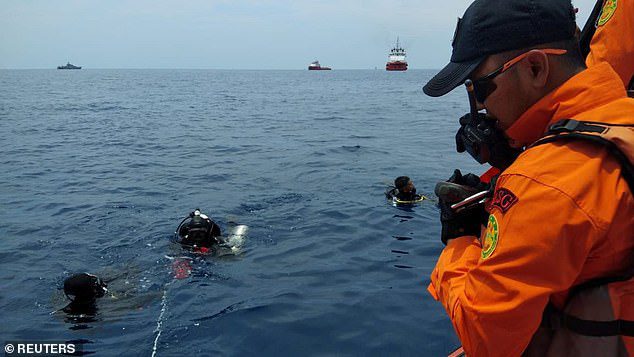 Rescue workers are at the site where it is believed the Lion Air flight JT610 crashed just minutes after taking off. Divers (pictured) are trying to locate the wreckage

The crash is the worst airline disaster in Indonesia since an AirAsia flight from Surabaya to Singapore plunged into the sea in December 2014, killing all 162 on board.

Indonesian airlines were barred in 2007 from flying to Europe because of safety concerns, though several were allowed to resume services in the following decade. The ban was completely lifted in June this year. The U.S. lifted a decade-long ban in 2016.

Lion Air, a discount carrier, is one of Indonesia’s youngest and biggest airlines, flying to dozens of domestic and international destinations.

In 2013, one of its Boeing 737-800 jets missed the runway while landing on Bali, crashing into the sea without causing any fatalities among the 108 people on board.