Bill Gates hitched a ride on Jeffrey Epstein’s plane – four years after he served time behind bars for soliciting a minor under the age of 18 for sex.

Flight records reveal that Gates flew with Epstein from Teterboro Airport in New Jersey to Palm Beach on March 1, 2013, one of the few flights that year where pilot Larry Viskoski recorded the name of a passenger.

A representative for Gates did not respond to a request for comment, and the pairing is an odd one given the work Melinda Gates and the couple’s foundation does for young women around the world.

The pair had spent time together previously, most notably at the annual Edge Dinner, which each year welcomes billionaires from around the world to come together and discuss advancements they are working in on the worlds of math, science, and technology.

In fact, the 2013 dinner took place just two nights before they flew to Florida, though neither of the men is pictured attending that year’s event.

Epstein did claim he worked as a financial adviser to Gates for some time, but that claim was later shot down by the Microsoft founder’s representative.

The two men do however both own property in southern Florida, where Epstein had two homes including a $12 million Palm Beach mansion and Gates owns a five-property compound in Wellington that he purchased for a total of $40 million. 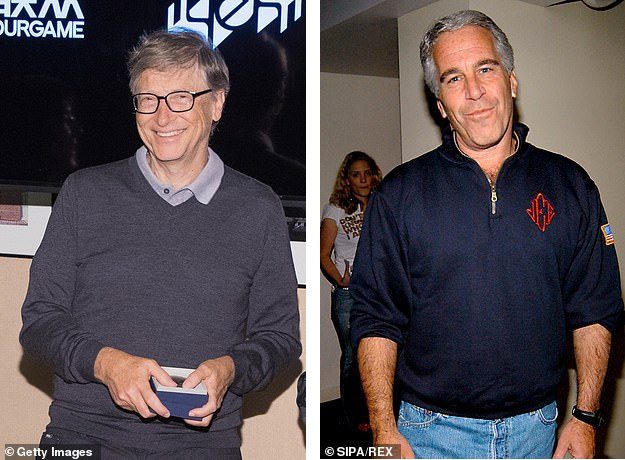 In a biography that was published on the website for Edge, but later deleted, it is noted that Epstein ‘founded the Jeffrey Epstein VI Foundation in 2000 to fund and support cutting edge science around the world.’

He is also said to be ‘one of the largest supporters of individual scientists, including theoretical physicist Stephen Hawking and Nobel Laureates Gerard ‘t Hooft, David Gross, and Frank Wilczek.’

In an alarming addition, the biography then states that Epstein has taken ‘an active role in supporting education across the United States as well as philanthropy in the US Virgin Islands, where the foundation is based.’

He traveled to the 2002 dinner with guests including architect David Rockwell, author Michael Wolff, journalist Richard Cook, and literary agent John Brockman – who was also the editor of the Edge website.

Gates was not the only famous name to hop aboard Epstein’s plane either, with the serial pedophile also welcoming famed newsman Walter Cronkite, architect Peter Marino and a passenger identified as John Roberts.

This in addition to the already noted famous guests such as Bill Clinton, Naomi Campbell, Kevin Spacey, Chris Tucker and Prince Andrew.

Two of Jeffrey Epstein’s ‘sex slaves’ claim that they engaged in sexual acts with Prince Andrew – one of whom was underage at the time.

Virginia Roberts, whose defamation case against Epstein’s alleged madame Ghislaine Maxwell is the source of these unsealed documents, provides a photo of herself with Prince Andrew and Maxwell at the later’s London home in one court filing.

She was 17 at the time the photo was taken of the three.

The documents were released Friday morning just moments after the US Court of Appeals for the Second Circuit upheld the decision to make public over 2,000 pages of court filings that had previously been under seal.

Those documents reveal in great detail the three-year period in which Roberts claims she was Epstein and Maxwell’s ‘sex slave.’

‘One of the individuals Ms. Giuffre was trafficked to was Prince Andrew – trafficking that took place in Defendant’s own townhouse in London,’ states the filing, which was in response to a Motion to Dismiss from Maxwell’s attorneys.

‘There exist flight logs evidencing Ms. Giuffre flying to London alongside Defendant and Epstein on Epstein’s private plane, and a photo of Ms. Giuffre, Defendant, and the Prince, without Defendant, ever offering a legal reasonable explanation for that photo being taken, or for traveling with a 17-year-old girl overseas.’

The other female, Johanna Sjoberg, alleged that Prince Andrew groped her and Roberts in 2001 while the group was at Epstein’s townhouse, in a deposition that was released with the unsealed court documents.

Sjoberg, who was 21 at the time, claims there were multiple eyewitnesses to the incident.

‘I just remember someone suggesting a photo, and they told us to go get on the couch. And so Andrew and Virginia sat on the couch, and they put the puppet, the puppet on her lap,’ said Sjoberg in a deposition.

‘And so then I sat on Andrew’s lap, and I believe in my own volition, and they took the puppet’s hands and put it on Virginia’s breast, and so Andrew put his on mine.’

Roberts’ attorneys meanwhile used the photo of the teenager with Prince Andrew and Maxwell to point out that the defendant in that case never explained how they came to be alone in her London townhouse with a teenager from Florida.

‘This particular photograph corroborates Ms. Giuffre’s claims, and there is no other reasonable explanation why an American child should be in the company of adults, not her kin, in the London house owned by the girlfriend of a now-convicted sex offender.’

Prince Andrew has always denied any wrongdoing and in a 2015 court application, a judge threw out Robert’s allegations that she had sex with Prince Andrew and ordered them to be struck from the record as being ‘immaterial and impertinent.’

Buckingham Palace also issued on the record statements in January 2015, stating: ‘Any suggestion of impropriety with underage minors is categorically untrue.’

That statement went on to note: ‘It is emphatically denied that the Duke of York had any form of sexual contact or relationship with Virginia Roberts. The allegations made are false and without any foundation.’

Roberts also revealed two men who did not engage in any sexual acts with Epstein’s victims in her own deposition that was unsealed on Friday – Bill Clinton and Donald Trump.

Roberts said in a 2016 deposition that Trump ‘didn’t partake in any sex with us … and never flirted with me’.

She also stated that despite Epstein talking about how the two were friends, she did not recall ever seeing him at the Palm Beach mansion.

Robert did, however, confirm that ‘Donald Trump was also a good friend of Jeffrey’s.’

A lawyer for Maxwell then asked: ‘What is the basis for your statement that Donald Trump is a good friend of Jeffrey’s’

Roberts responded: ‘Jeffrey told me that Donald Trump is a good friend of his.’

Trump had been Roberts’ boss prior to the three years that she was allegedly trafficked by Epstein around the globe.

She has stated in court papers and multiple interviews that Maxwell recruited her while she was working at Mar-a-Lago.

Other famous friends that Roberts said she had met included Heidi Klum and Naomi Campbell, in addition to Gore.

That deposition also detailed the ‘sexual training’ that Roberts allegedly received from Epstein and Maxwell, which lasted somewhere between four and six months.

After that was complete, Epstein began to traffic Roberts to his friends she said.

Roberts has spoken publicly about her time with Epstein on a few occasions and stated that by 18 she was deemed too old for the pedophile.

A short while later she managed to escape, after being sent to Thailand for her 19th birthday to take a massage course – and told she would be taking back an underage girl.

Roberts was to interview the minor with the goal of taking her back to the United States, but that all changed when she met her now-husband.

She never returned and the two went off to start a new life in Australia, where they are now raising their three children.

She has since devoted her time to combating sex trafficking and the sexual abuse of minors.