Melania Trump wowed classic black cocktail dress while posing alongside her husband for their first official Christmas portrait as president and first lady.

The Trumps’ 2017 Christmas portrait was revealed on Melania’s Twitter page on Thursday afternoon — and the festive photo sees the president flashing an uncharacteristically bright smile.

According to the tweet, Andrea Hanks photographed President Trump and his wife on December 5 in the Cross Hall of the White House. 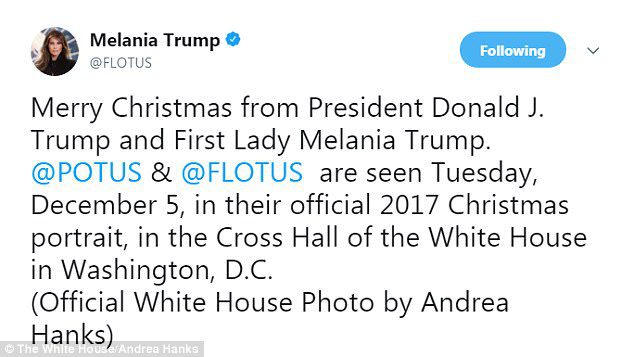 According to the tweet , Andrea Hanks photographed President Trump and his wife on December 5 in the Cross Hall of the White House 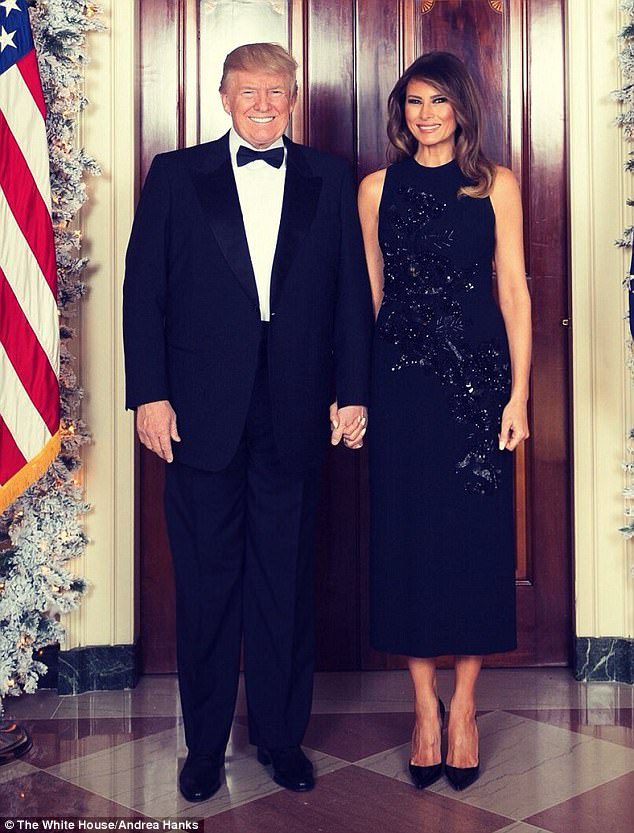 Melania opted for a sleeveless Delpozo dress featuring a sparkling applique and a pair of classic black pumps, while Trump wore a tuxedo

For the special occasion, Melania opted for a sleeveless Delpozo dress featuring a sparkling applique and a pair of classic black pumps.

She wore her highlighted brown hair parted to the side and curled in loose waves around her shoulders.

Trump matched his wife in a black tuxedo and black dress shoes, as they happily posed in front of the doors of the White House Blue Room.

Melania and her husband are holding hands in the photo, which sees them sporting toothy grins.

The use of the holiday greeting in the tweet is keeping with the president’s campaign pledge to start saying ‘Merry Christmas again.’ 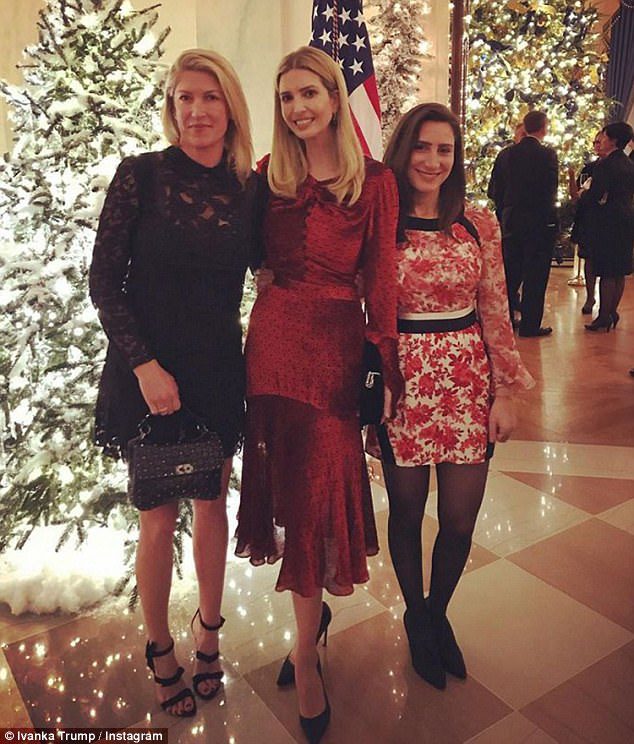 Ivanka, who converted to Judaism when she married her husband Jared Kushner also posted an Instagram picture captioned ‘Happy Holidays’ from the White House 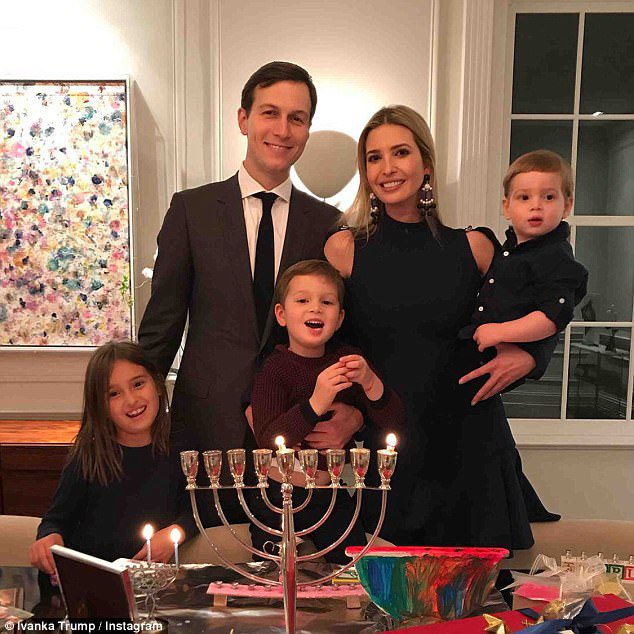 Family festivities: Ivanka also shared this snap of her family after they had lit their menorah at home while celebrating Hanukkah 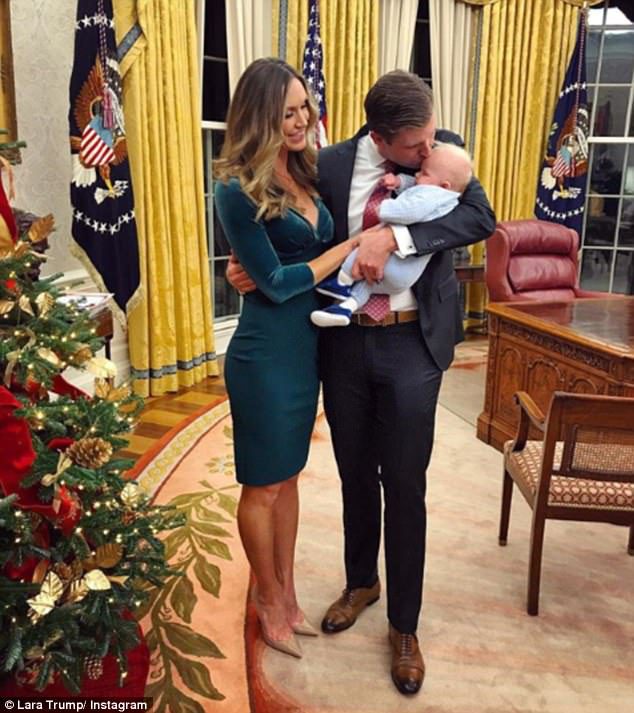 Getting in on the action: Ivanka’s brother Eric, 33, posed for his own holiday photo in the Oval Office, along with his wife Lara and their sweet newborn baby Luke

He repeated the pledge most recently in October at the Voter Values Summit when he said: ‘They don’t use the word ‘Christmas’ because it’s not politically correct,’ Trump said. ‘We’re saying ‘Merry Christmas’ again.’

The Obamas, in contrast, always said ‘Happy Holidays’ in their cards, although their defenders say the former president used ‘Merry Christmas’ in speeches.

And unlike her father, Ivanka – who converted to Judaism when she married her husband Jared Kushner in 2009 and is currently celebrating Hanukkah – used ‘Happy Holidays’ when she shared her own festive photo from the White House over the weekend.

Posing with two friends in front of one of the many glittering trees being used to decorate the interior of the building, Ivanka is the picture of festive chic in a red silk dress and black high heels.

When posting the image to Instagram, she simply captioned it: ‘Happy Holidays’

However, just a few days later, she returned to the social media site with some more holiday cheer, this time in the form of a sweet family portrait, which was captioned ‘Happy Chanukah’ and taken at her D.C. home, shortly after she, Jared, and their children, had lit their menorah. Keeping with his campaign pledge, President Trump wrote ‘Merry Christmas and a Happy New Year’ instead of ‘Happy Holidays’ inside the official 2017 White House Christmas card 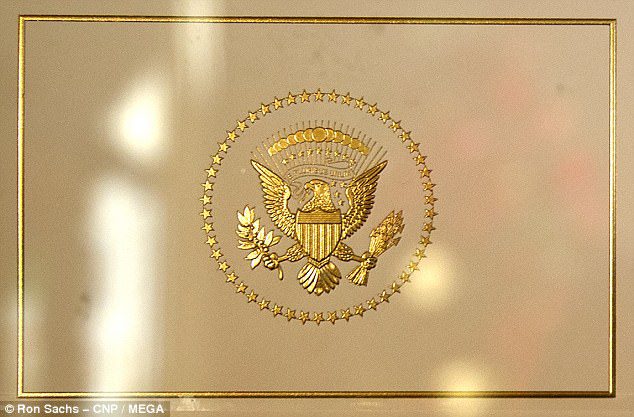 In late November, the Trump family debuted their holiday card, which wishes Americans a ‘Merry Christmas and a Happy New Year,’ instead of the more politically correct, ‘Happy Holidays.’

Also unlike the Obamas, who included family photo featuring their daughters on their final White House Christmas card, the president didn’t include any of his children in the card.

However, the president and first lady’s 11-year-old son Barron did sign his name underneath his parents on the card.

Around the time of the release of their Christmas card, Melania unveiled the White House’s Christmas decorations.

In their official Christmas portrait, the door to the Blue Room is outlined in garland and flanked by two Christmas trees, one on each side.

The holiday photo comes just one day after the first lady traveled to Joint Base Anacostia-Bolling in Washington, D.C. to help with the Marine Corps Reserve Toys for Tots campaign. 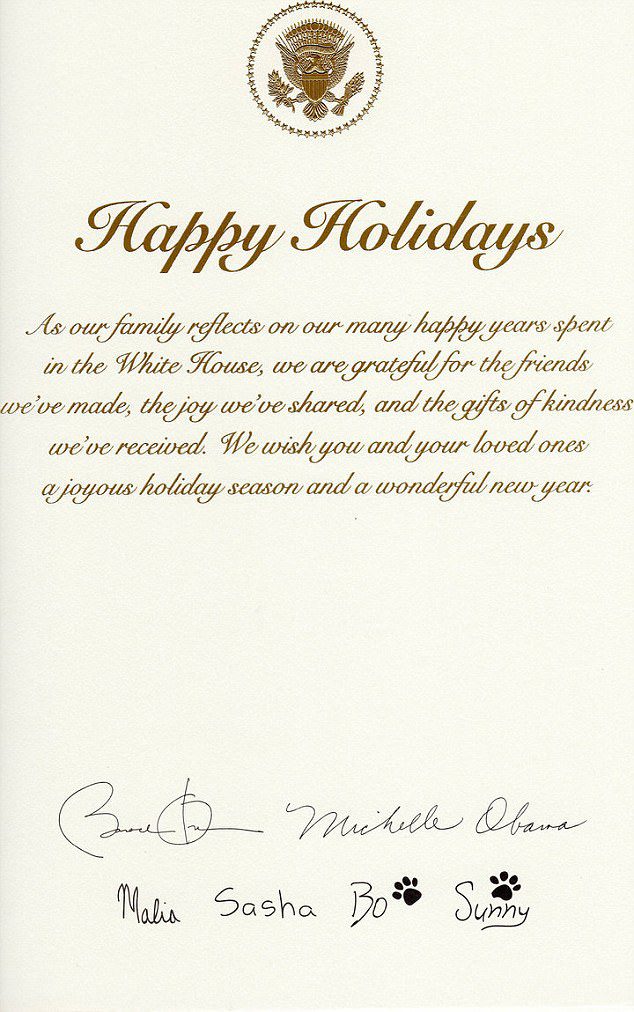 Melania looked ready for the holidays as she donned a green wool coat to sort and box toys with the children at the base.

The former model tucked her pants into a pair of nude, high-heeled boots that reached her calves.

Throughout her husband’s presidency, Melania has revealed in working with children, and Wednesday was no exception.

The Toys for Tots program has provided toys and other gifts to millions of needy children around the country at Christmas since the 1940s, and Melania looked happy to sort through toys at the base.

The mother-of-one was all smiles as she took some time to sit down with a group of kids while she helped them make holiday cards.

At one point, Melania was seen squatting down to show three-year-old Mehreem Donahue from McLean, Virginia, a toy that was in her hand. 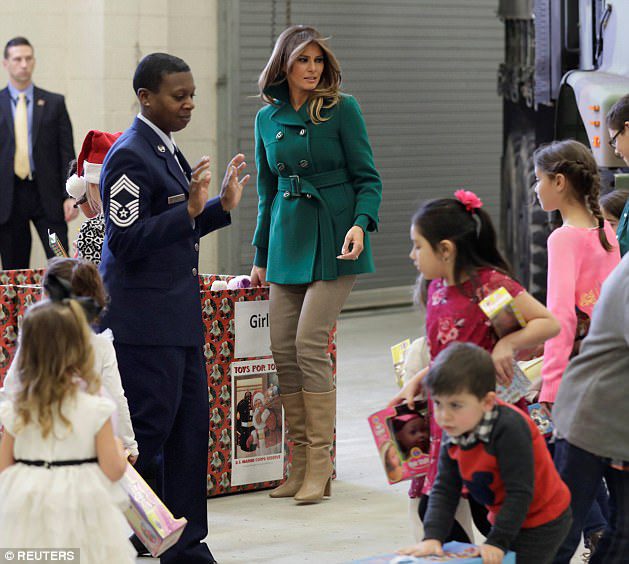 The Trumps’ Christmas portrait was revealed just one day after Melania traveled to Joint Base Anacostia-Bolling in Washington, D.C. to meet with military families and their children 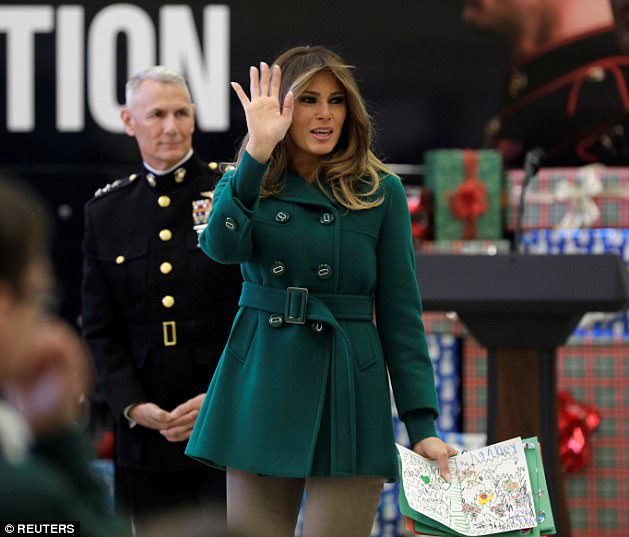 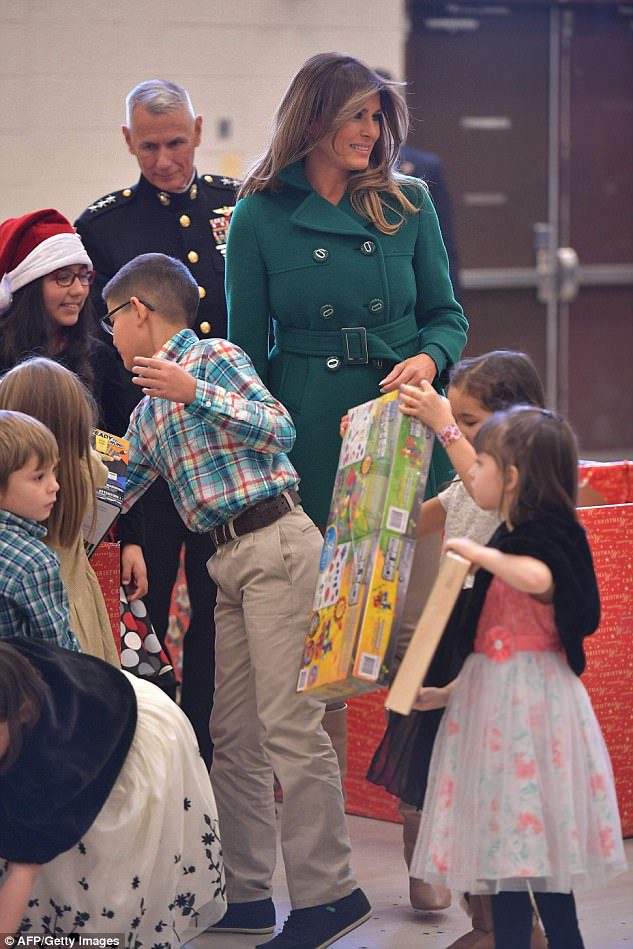 The first lady appeared to take a liking to the tot, as she was also photographed picking her up and sitting her on her lap while she chatted with the other children around her.

Melania’s face lit up with delight as she checked out some of the kids’ holiday cards at the charitable event.

In addition to making cards with the kids and sorting through toys, Melania took to the stage to speak to the military personnel and their children at the base.

Melania said she hopes the giving spirit that Americans displayed during a season of devastating hurricanes will continue over Christmas and into the new year.

She noted that she wants people to remember that the holidays are about family, service, and gratitude — not gifts.

Melania also added that Americans must continue to look out for and help one another.