Home
Humanity
Customer Disapproves Of Waitress’ Appearance And Asks For New Server, But It Doesn’t End There…

A waitress in Tennessee is getting a plethora of support after a customer allegedly told her manager that she wasn’t dressed like a waitress should be dressed.

24-year-old Ashley Chiarizzio works at the Mt. Juliet Red Robin restaurant, and Saturday night started out like any other evening on her shift. Chiarizzio has piercings, tattoos and blue hair, which led to the customer complaint. Her manager came up to her and said the customer wanted a new server because of how she looked. 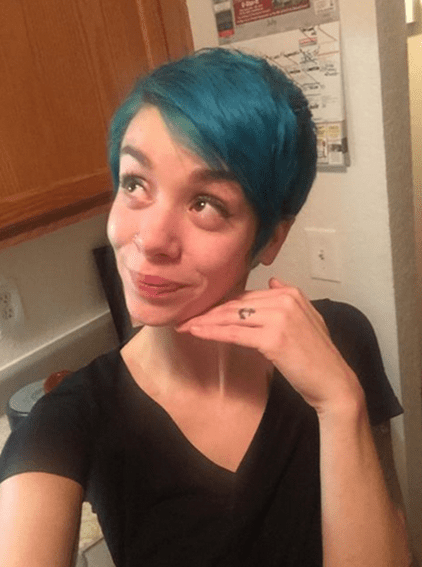 A bit taken back, Chiarizzio said nobody had ever told her she wasn’t good enough to serve someone because of how she looked.

A Red Robin spokesperson said they were aware of the incident and the company has no dress policy that keeps employees from coloring their hair or having tattoos.

Chiarizzio said she cried a bit about the lady’s thoughts and wanted to share the experience on Facebook. She “spoke” to the lady, saying while she drove home, she cried and prayed for her. She said she prayed the woman would learn about tolerance and acceptance. Chiarizzio said she decided to dye her hair a brighter blue and get another tattoo, crediting the woman for the inspiration.

She suggested the woman avoid going to restaurants where employees are allowed to have tattoos, weird hair and piercings.

Here’s what Chiarizzio wrote on FB:

To the lady who refused to let me serve her tonight because you didn’t agree with “what I represented” and “how I presented myself”, I just wanted to let you know, while I cried on my drive home, I prayed for you. I pray God over looks your judgement of me, I pray you learn acceptance and tolerance to things you didn’t grow up with, and I pray that you learn someone’s appearance does not affect their ability to work (especially to serve burgers and fries). You did however, light a fire under my butt so now I’m sitting at home with an even brighter blue in my hair, and planning out my next tattoo! All with you in mind. 🙂 I hope you had a great dinner, and enjoyed your night out with your husband.

Also.. Might want to avoid restaurants that openly allow their employees to have tattoos, piercings, and “weird” hair. I hear Olive Garden is nice!

Chiarizzio’s post went viral and has attained a plethora of shares, likes and comments. She said many of the people on the post were supportive.

The next Friday evening, her co-workers sprayed their hair blue and wore temporary tattoos.

Chiarizzio said she wants her story to wake people up to realize that not everybody is the same and to accept people for their differences.

According to the restaurant’s spokesperson, the company has not and will not institute a nondiscriminatory policy. The policy states that when a customer requests a new server based on a discriminatory reason, the manager will not honor that request.