A video has emerged online of a teen being dragged around a field by her hair by a bully before being brutally punched in the head.

A crowd of young girls filmed the vicious attack on their mobiles and cheer as the victim, Abbie McCarthy, 15, is brutally assaulted by another girl.

Abbie’s mum Carly, 36, from Middleton, Manchester, claims her daughter was forced to move schools in April due to her classmates bullying her.

Mum-of-four Carly, a full-time carer for her autistic son, described how bullies made her daughter’s life hell: ‘They were pushing her and putting glue into her hair,’she said.

‘She was constantly upset. But last week, the bullies cornered Abbie in a field close to her home where around 15 people were waiting.’

In the 56-second clip, a teen punches Abbie repeatedly in the head as she pleads with her to let her go as she taunts: ‘Chat sh** about me dad again. I f***in’ dare ya. You’re dead mate!’ 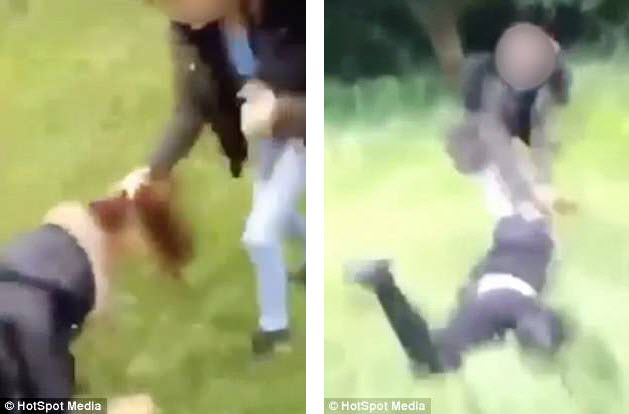 Then, as Abbie staggers to her feet, bystanders run forward to film her bleeding as they taunt ‘She’s nearly crying’.

Carly says: ‘One of the girls pushed her to the floor and dragged Abbie by her hair. ‘She was kneed in the face and punched.

‘Afterwards, she ran home sobbing and told me she’d been beaten up.

‘That evening, Carly reported the incident to Greater Manchester Police after spotting a video of the attack being shared on social media app Snapchat. 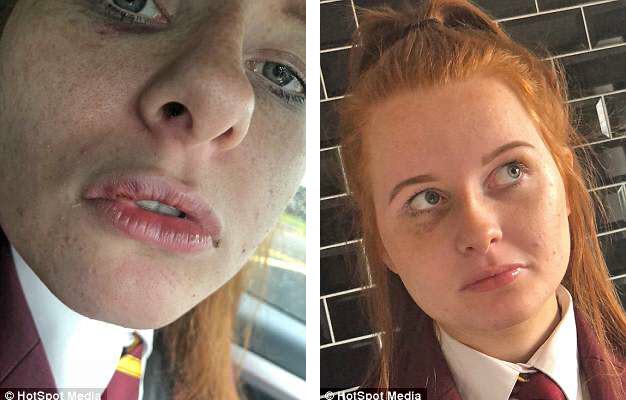 The footage was posted online and was spotted by tormented Abbi’s mother who says that the bullies made her daughter’s life hell. Pictured, Abbi suffered a split lip and a bruise on her eye

She says: ‘I was horrified. ‘Abbie had a massive lump on her head. I took her to our GP on Friday who said she had whiplash.’

Carly says she was shocked by the video but she insists that people watch it.

She says: ‘Bullies should not be able to get away with this. 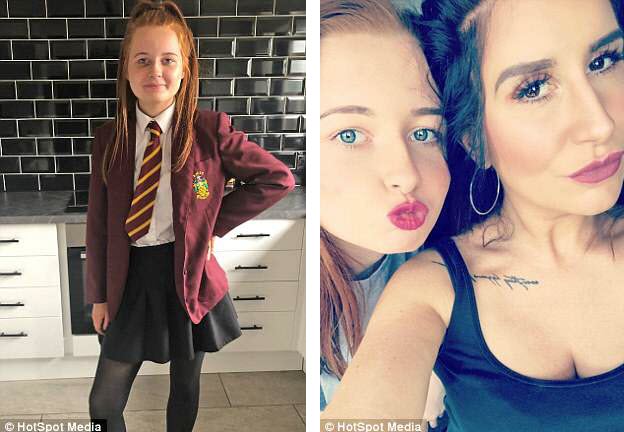 Abbie, pictured left in her school uniform, had a ‘massive lump on her head and suffered whiplash after mum Carly, right with Abbie, took her to the GP

‘They should be shamed and maybe they’ll think twice next time.’

Statistics from the National Bullying Prevention Center says that more than one out of every five (20.8%) students report being bullied.

There were over 24,000 Childline counseling sessions with children about bullying in 2016 and 2017.