A creative mother is teaching her five-year-old daughter the importance of money by making her ‘pay rent’ — and parents are praising her preparing her child for the real world.

Essence Evans took to Facebook on Sunday to share that she takes the majority of her daughter’s allowance for ‘rent’ while secretly tucking the money away in a saving account for her little girl.

‘I make my five-year-old pay rent,’ she wrote. ‘Every week she gets $7 dollars in allowance. But I explained to her that in the real world most people spend most of their paycheck on bills with little to spend on themselves. 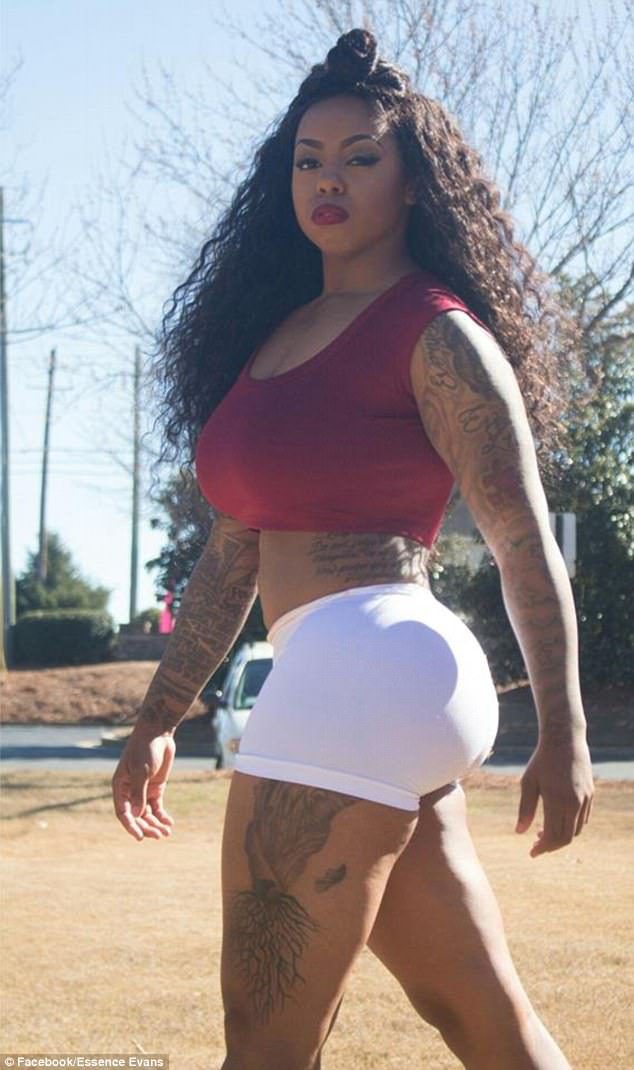 Genius? Essence Evans has revealed that she makes her five-year-old daughter ‘pay rent’ 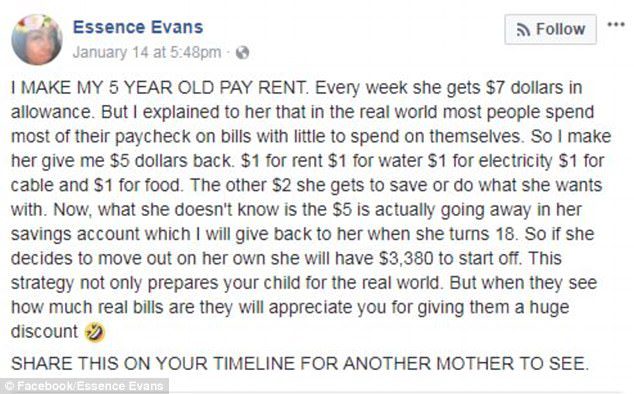 Spreading the word: The mom shared her story on Facebook this week and urged other parents to make their kids pay bills as well

After her ‘bills’ are paid, Essence’s daughter can choose to save the remaining $2 or spend it how she pleases.

However, unlike most landlords, Essence isn’t keeping the money herself. She is tucking it away for her daughter’s future.

‘What she doesn’t know is the $5 is actually going away in her savings account which I will give back to her when she turns 18,’ she explained. 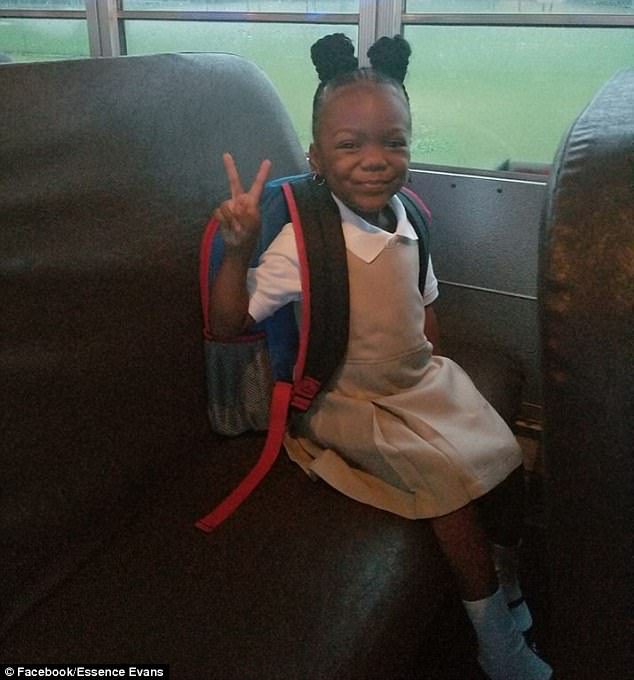 All smiles: Essence’s daughter gets a $7 allowance, but she has to give $5 back to her for ‘bills’ 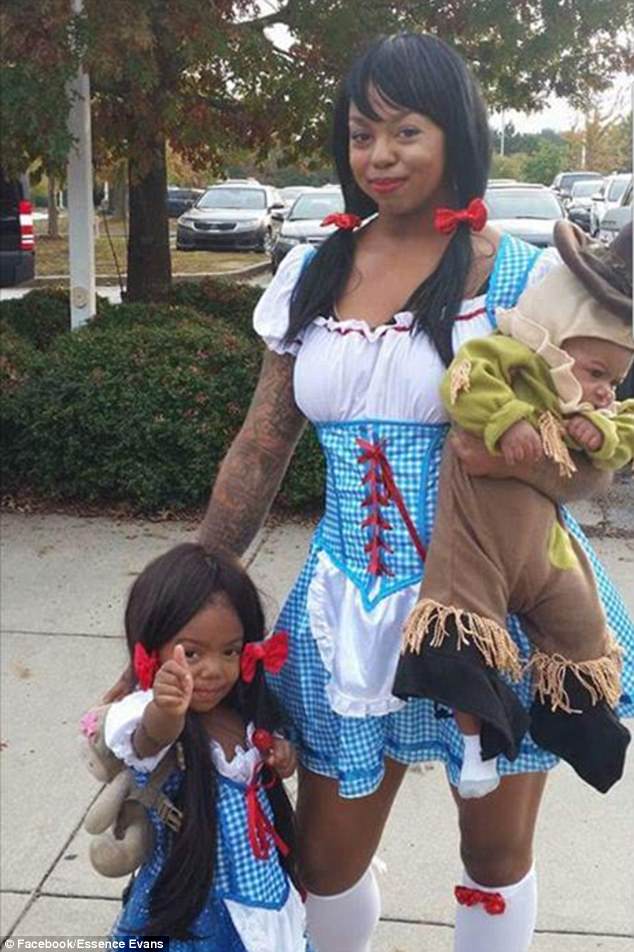 Essence stressed that her strategy prepares children for the real world, insisting that they will be grateful in the long run.

‘When they see how much real bills are they will appreciate you for giving them a huge discount,’ she noted.

Essence ended her post by urging other parents to start doing the same thing with their own children.

The Facebook post has been shared more than 313,000 times, and thousands of people have praised her for teaching her daughter such an important money lesson at an early age. 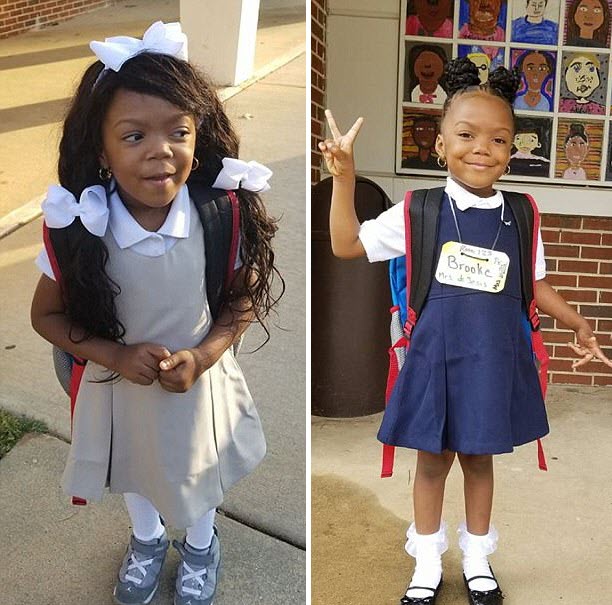 Just like an adult! After her ‘bills’ are paid, Essence’s daughter can choose to save the remaining $2 or spend it how she pleases 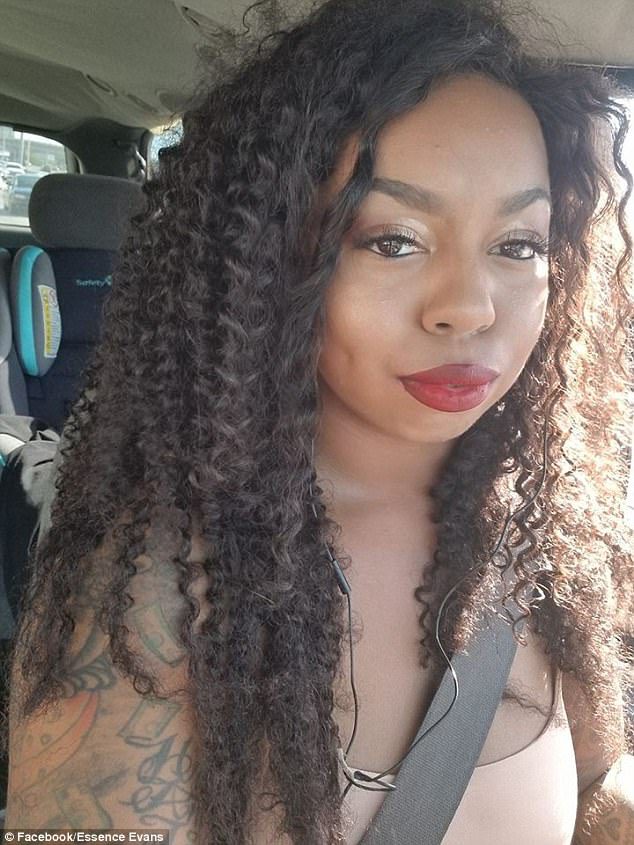 Surprise! Essence is secretly putting her daughter’s ‘rent’ money in a savings account that she will give back to her when she turns 18

‘You are brilliant for teaching this to your child in this way!’ Melissa Thomas wrote. ‘I have done similar with my kids, and I am now the proud parent of two young ladies who know and respect what they can earn more than something given to them.’

‘Well done!’ Maria Gahan-Broman added. ‘I did a similar version of this when my boys were little, they have turned out to be amazing men and fathers, great with money, taking care of their children, owning their home, paying mortgages down, staying out of debt.’

And while many appreciated Essence’s strategy, some others worried it was putting unnecessary stress on her daughter.

‘Its YOUR job to raise your child,’ Stacey Branan Taylor commented. ‘Put the money in a savings account if you want, but no child should be made to feel that they should pay for what a parent should provide.’