An out of control driver had to be rescued by his father after getting trapped in his burning car while racing around the track.

Mike Jones spiralled out of control and was sent crashing into the walls after he collided with another motorist before his car went up in flames.

Mr Jones was stuck inside the vehicle for around 15 seconds as flames erupted from the bonnet.

Panicked father Dean Jones, who was only wearing a T-shirt and shorts, then jumped over a fence.

He managed to drag his son through the window after he had spent around 25 seconds trapped in the blaze.

Despite his son being saved from danger, the heroic father returned to try to help track safety staff put out the inferno. 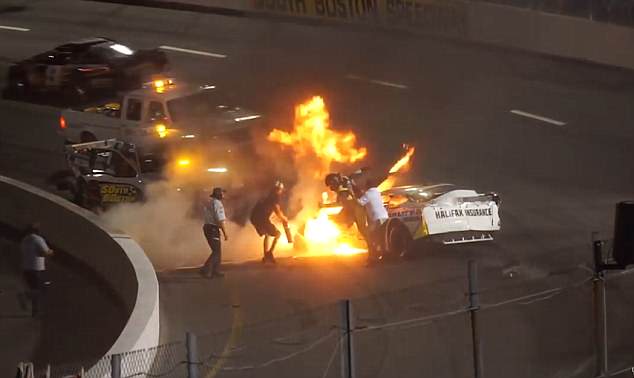 While Jones escaped unharmed, his father could potentially face punishment from NASCAR for going onto the track and tackling the blaze.