The first images have emerged of National Guard members patrolling along the US-Mexico border following a call from the president to send troops.

Arizona, New Mexico, and Texas all made pledges that add up to almost half of the up to 4,000 troops Trump requested. Some Guard members started arriving at the border as states and the federal government officials continued to discuss what they will do.

Meanwhile, on Wednesday, California Gov. Jerry Brown accepted Trump’s call to send their National Guard to the Mexican border, but rejected the White House’s portrait of a burgeoning border crisis and insisted that his troops will have nothing to do with immigration enforcement. 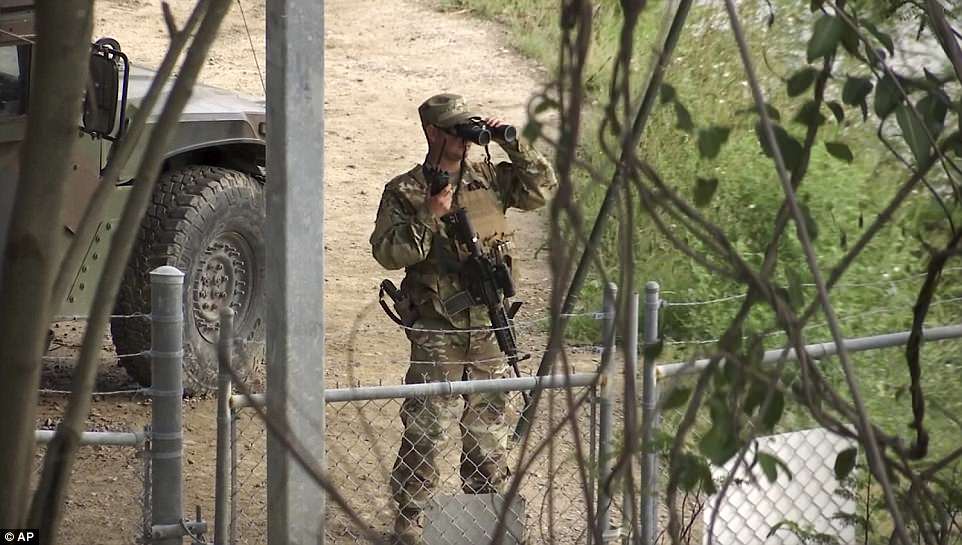 A National Guard troop watches over Rio Grande River on the border in Roma, Texas on Wednesday. The deployment of National Guard members to the U.S.-Mexico border at President Donald Trump’s request was underway Tuesday with a gradual ramp-up of troops under orders to help curb illegal immigration 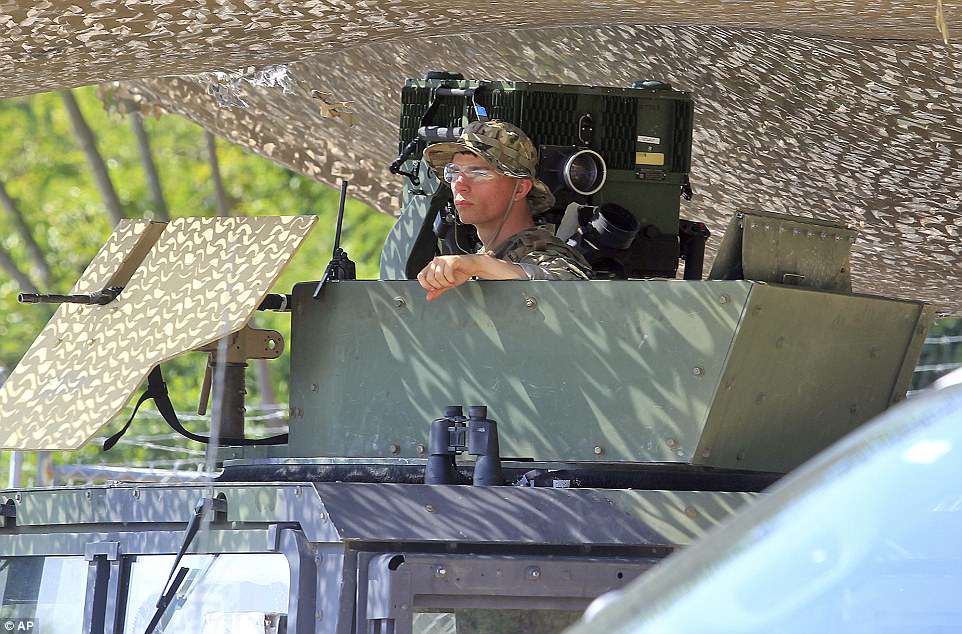 A soldier from the Texas Army National Guard keeps watch on the banks of the Rio Grande on Wednesday in Roma, Texas sits inside of a tank 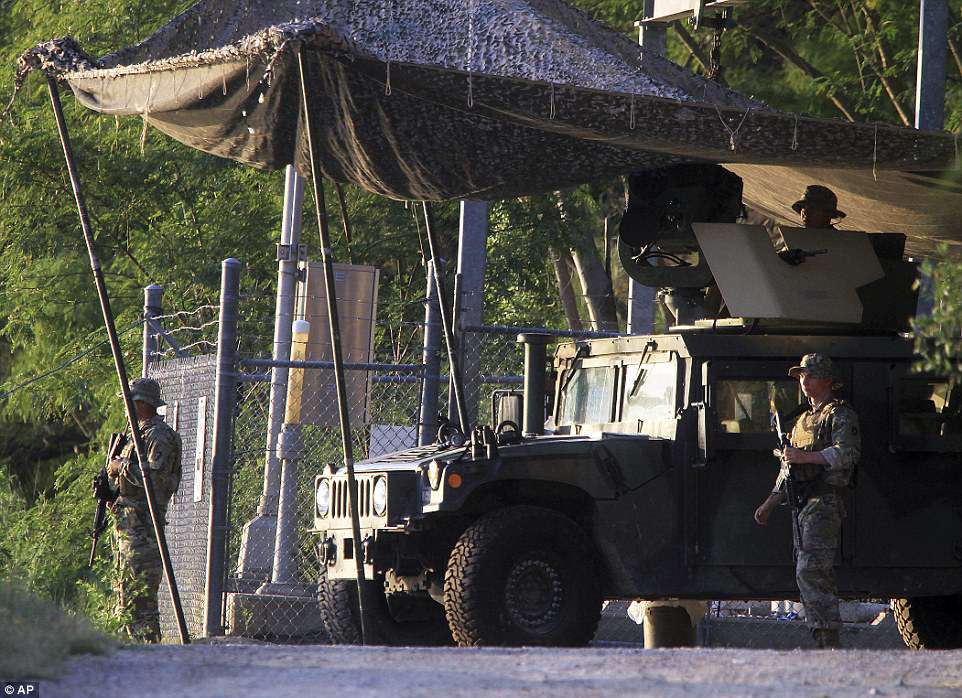 Soldiers from the Texas Army National Guard keep watch on the banks of the Rio Grande, where some of them will be armed where necessary (pictured Wednesday)

The Democratic governor broke a week of silence Wednesday by agreeing to contribute 400 troops, though not all will be on the border.

Brown’s commitment brought pledges from the four states that border Mexico just shy of the low end of the president’s target marshal 2,000 to 4,000 troops.

Brown cast his decision as a welcome infusion of federal support to fight transnational criminal gangs and drug and firearms smugglers.

‘Combating these criminal threats are priorities for all Americans – Republicans and Democrats,’ Brown wrote in a letter to Defense Secretary James Mattis and Homeland Security Secretary Kirstjen Nielsen.

Brown has repeatedly fought with Trump over immigration policy. Under the federal law, Trump invoked in his proclamation calling for National Guard troops, governors who send troops to retain command and control over their state’s Guard members and the U.S. government picks up the cost.

Trump said last week he wants to send the National Guard members to the border, issuing a proclamation citing ‘the lawlessness that continues at our southern border.’

‘My administration has no choice but to act,’ he wrote.

Administration officials have said that rising numbers of people being caught at the southern border, while in line with seasonal trends in recent years, require an immediate response.

Apprehensions are still well below their historical trends during the terms of former Presidents George W. Bush and Barack Obama, both of whom also deployed the Guard to the border.

In Mexico City, a caravan of Central American migrants that had been heading north stopped in the Mexican capital. The caravan had sparked furious criticism from Trump, followed days later by his National Guard border protection deployment plan. Organizers said they never intended to go to the U.S. border.

Mexico’s foreign relations secretary said his government is evaluating its cooperation with the United States.

Luis Videgaray said in a Monday interview with local media that he will give results of the analysis to President Enrique Pena Nieto in coming weeks.

The country’s Senate passed a resolution last week saying Mexico should suspend cooperation with the U.S. on illegal immigration and drug trafficking in retaliation for Trump’s move. 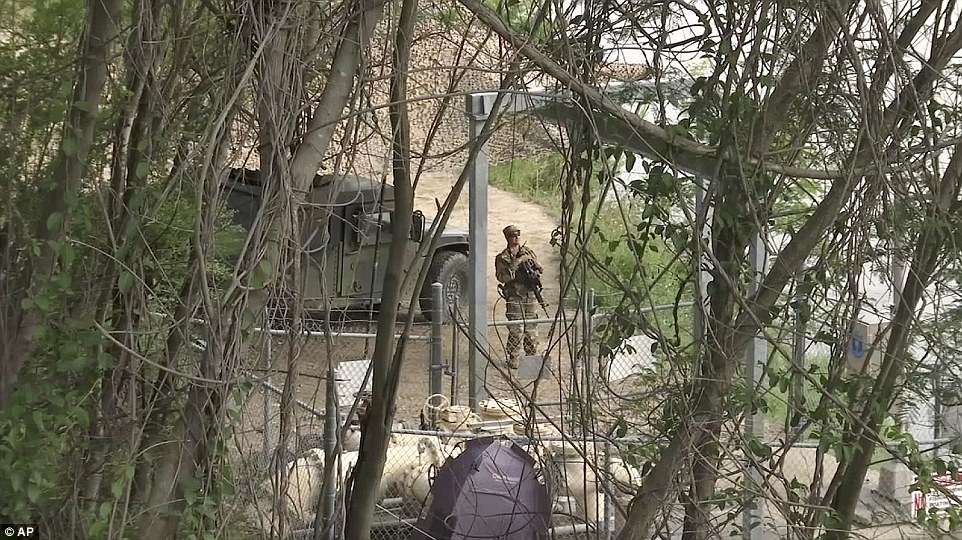 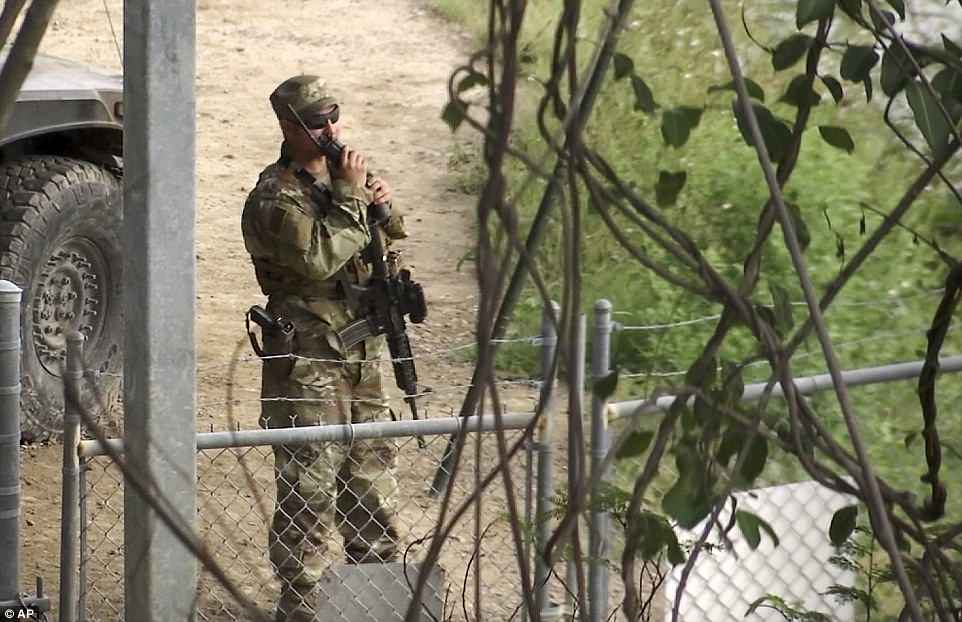 The deployment of National Guard members to the US-Mexico border was spurred by President Trump last week, as Arizona, New Mexico, Texas and California have pledged troops 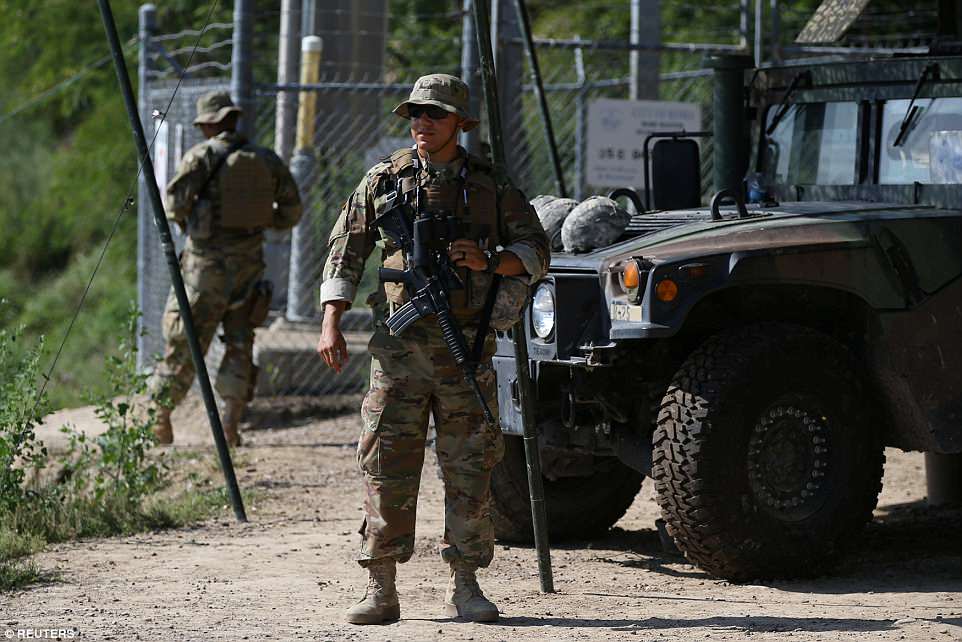 Members of the Texas National Guard watch the Mexico-U.S. border from an outpost along the Rio Grande in Roma, Texas 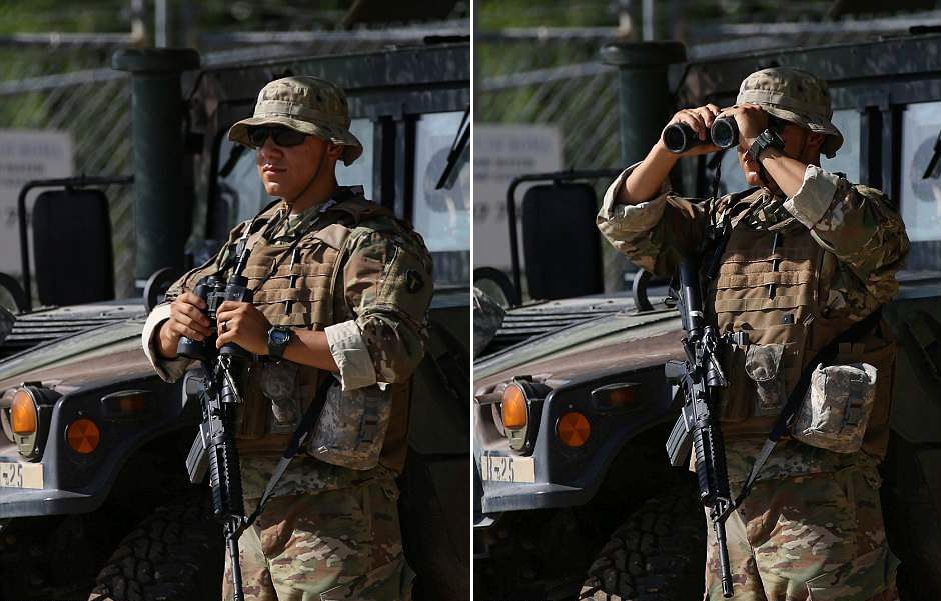 A member of the Texas National Guard keeps a watchful eye on the US-Mexico border Wednesday using binoculars as members are now deployed, and more waves are expected 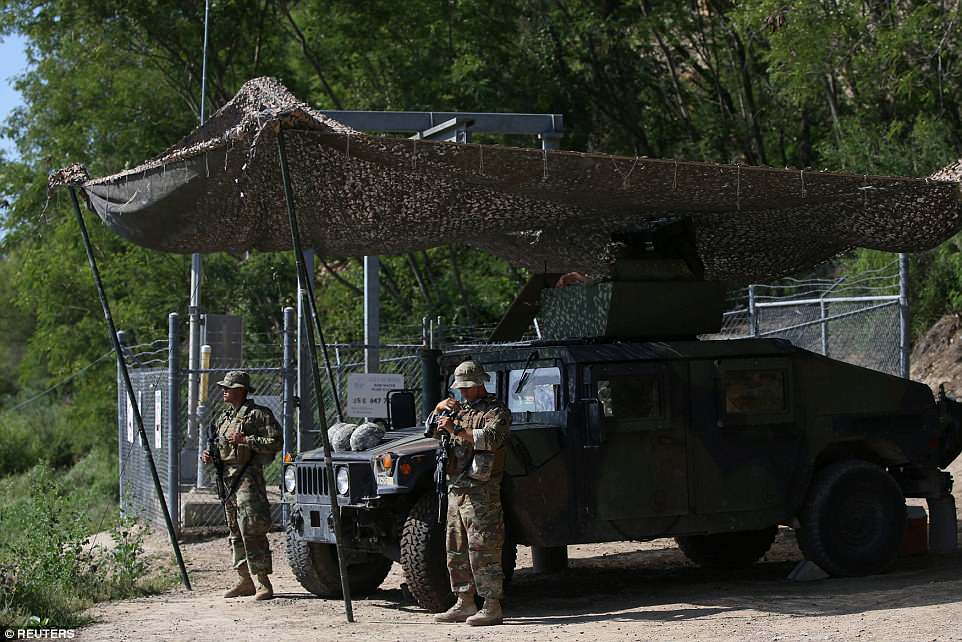 Members of the Texas National Guard watch the Mexico-U.S. border from an outpost along the Rio Grande in Roma, Texas

But Videgaray said ‘no decision has been taken to reduce or suspend any mechanism or cooperation.’

Arizona Gov. Doug Ducey told a group of soldiers preparing to deploy from a Phoenix military base that their ‘mission is about providing manpower and resources’ to support agencies on the border and denied that there was a political motive.

‘I don’t think this is a partisan issue or an identity issue,’ he said. ‘You show me somebody who is for drug cartels or human trafficking or this ammunition that’s coming over a wide-open and unprotected border here.’

Texas Gov. Greg Abbott told San Antonio radio station KTSA that he would add about 300 troops a week until the total number reaches at least 1,000 troops.

Some Guard members will be armed if they are placed in potential danger, Abbott said, adding he wanted to downplay speculation that ‘our National Guard is showing up with military bayonets trying to take on anybody that’s coming across the border because that is not their role.’

There is no end date for the deployment, Abbott said: ‘We may be in this for the long haul.’

New Mexico Gov. Susana Martinez’s office said that more than 80 troops would deploy later this week. They will be the first of an expected 250 Guard members from New Mexico to serve on the border.

South Carolina Gov. Henry McMaster, a Republican, offered to send members of his state’s Guard as well. South Carolina sent troops to the border during Operation Jump Start, the border deployment ordered by Bush in 2006.

Joel Villarreal, the mayor of Rio Grande City in Texas, said he did not agree with what he characterized as ‘the militarization of the border.’

‘It’s not good for business, to be frank with you,’ Villarreal said. 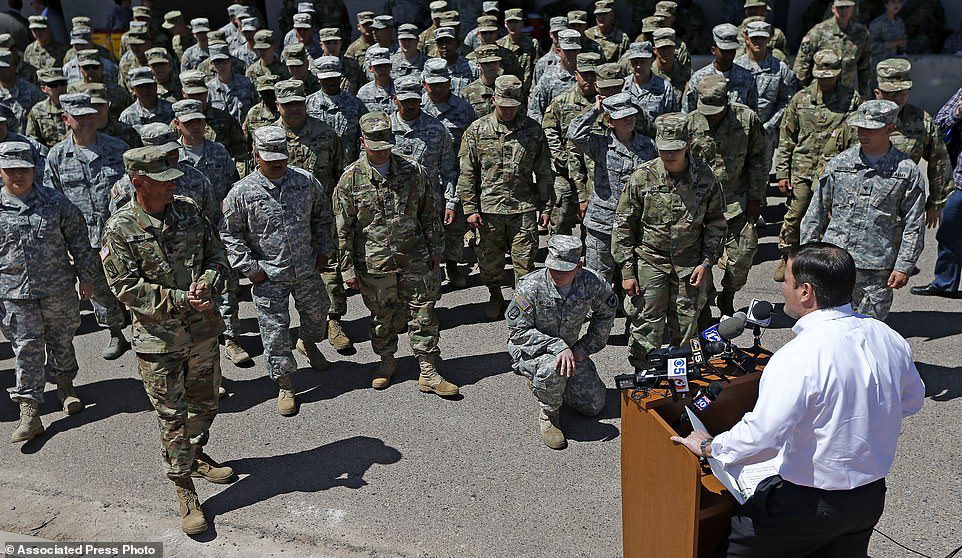 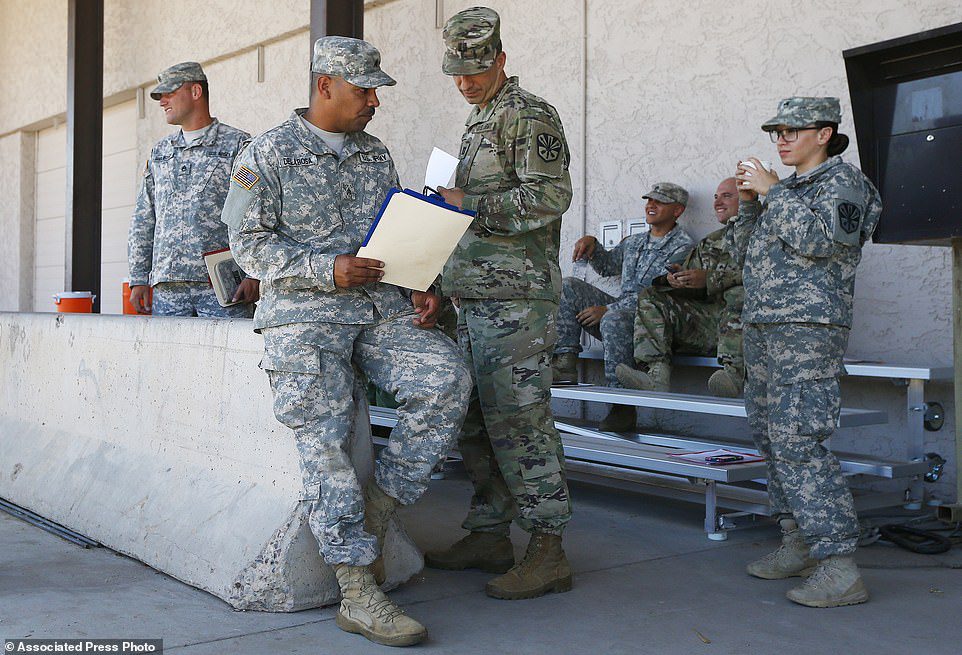 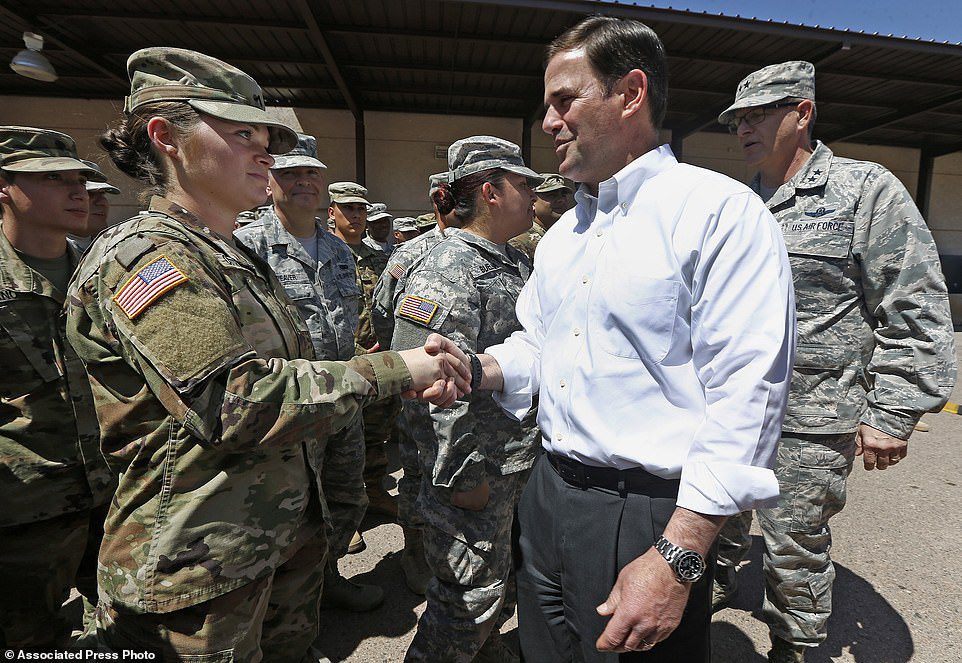 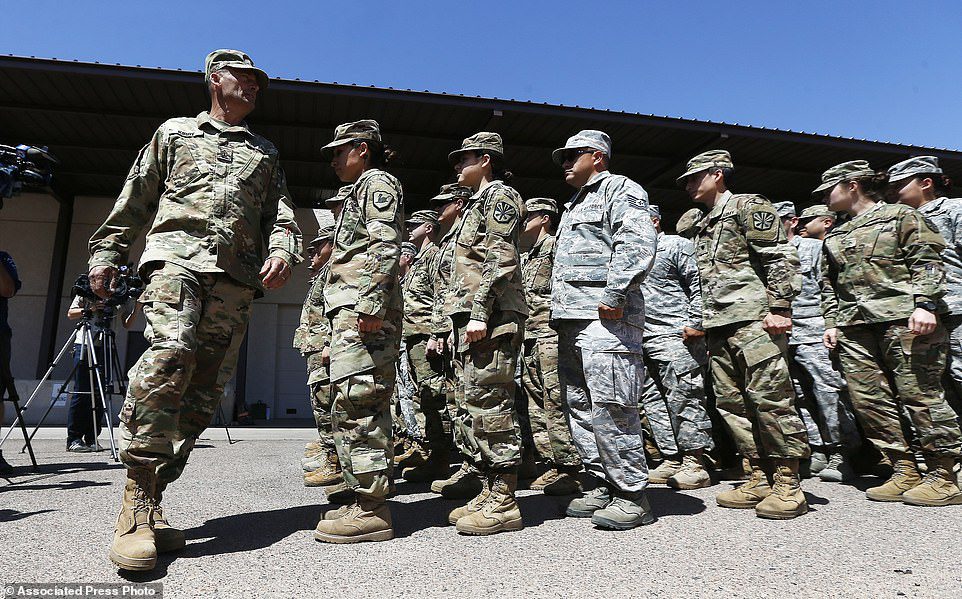 Arizona National Guard soldiers line up as they get ready for a visit from Arizona Gov. Doug Ducey prior their deployment to the Mexico border at the Papago Park Military Reservation Monday, April 9, 2018, in Phoenix. (AP Photo/Ross D. Franklin) 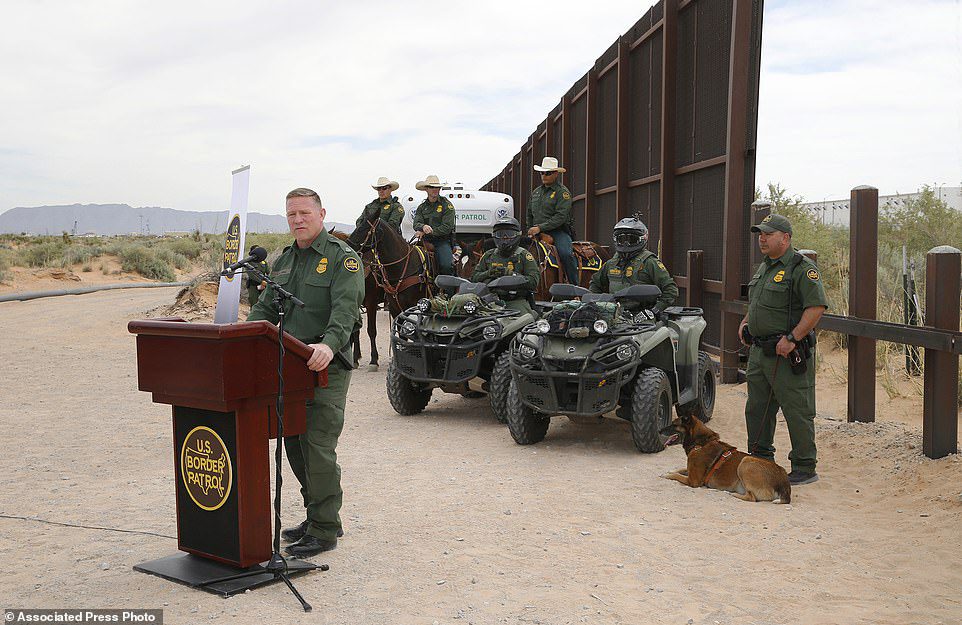 Aaron Hull, chief patrol agent of the U. S. Customs and Border Protection’s El Paso Sector, speaks where construction on a new segment of the border wall will be built, near Santa Teresa, N.M., Monday, April 9, 2018. Hull says the troops could help with air support, surveillance and repairs of infrastructure along the border so that Border Patrol agents have more time to enforce immigration law. (Ruben R. Ramirez/The El Paso Times via AP) Central American migrants who participated in the annual Migrants Stations of the Cross caravan, one with a sign that says in Spanish: “Get out Donald Trump,” walk to the Basilica of Guadalupe after arriving in a shelter in Mexico City, Monday, April 9, 2018. Mexico’s capital is the final planned stop of the migrant caravan that left from the Mexico-Guatemala border late last month to draw attention to policies toward immigrants and refugees. (AP Photo/Eduardo Verdugo)