U.S. Border Patrol has been accused of causing the deaths of hundreds of migrants a year by destroying food and water supplies left for them in the brutal Arizona desert by humanitarian groups.

On Wednesday, two humanitarian groups released a report, detailing how they’ve distributed more than 31,000 gallons of water along dangerous migrant paths in the Arizona desert between 2012 and 2015.

In that time frame, they say volunteers have found these stashes of food and water destroyed 415 times – or about two times a week on average. 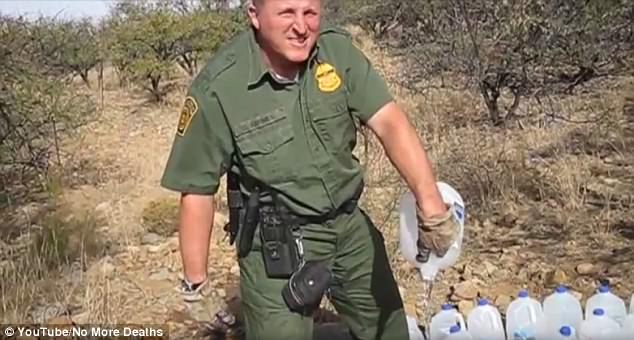 U.S. Border Patrol has been accused of destroying food and water left in the Arizona desert for migrants. Above, a still from a video of an agent pouring water bottles out 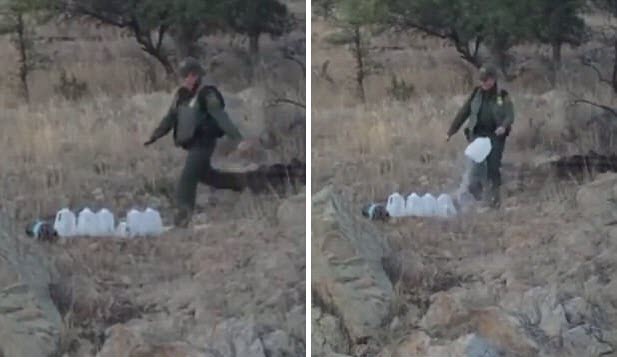 Between 2012-2015, The Tucson-based group No More Deaths said they distributed more than 31,000 gallons of water along migration trails. In that time span, they found water gallons vandalized 415 times

‘Through statistical analysis, video evidence, and personal experience, our team has uncovered a disturbing reality. In the majority of cases, US Border Patrol agents are responsible for the widespread interference with essential humanitarian efforts,’ the report reads.

They said that the Border Patrol is guilty of human rights violations.

‘The practice of destruction of and interference with aid is not the deviant behaviour of a few rogue border patrol agents, it is a systemic feature of enforcement practices in the borderlands,’ the report adds.

The groups – No More Deaths and La Coalicion de Derechos Humanos – say ramped up border security in the past few years has led migrants to take even more risky trails into the U.S. – through tall mountains and deserts where temperatures regularly reach over 100 degrees in the summer.

In order to survive the journey, which can take anywhere between three days and nearly a month, doctors recommend drinking between 1.3 to 3.1 gallons of water a day.

So it’s practically impossible to rely on off the water supplies that they travel with, typically no more than two gallons.

Humanitarian groups have been leaving water and food supplies along the trail to prevent deaths, which have become a regular occurrence.

Over the last two decades, some 7,000 human remains have been recovered from the U.S. borderlands. In Pima County alone, hundreds of migrants die each year making the crossing.

The two groups say that the U.S. Border Patrol is making the problem worse by compromising the water supplies they leave out in the desert.

The report says that wild animals, hunters, hikers and vigilante groups are also to blame for destroying these water and food supplies, but that they found that in most cases the Border Patrol was responsible.

The report even includes a video showing multiple cases where Border Patrol agents kicking water gallons and pouring them out.

When contacted by The Guardian, a Border Patrol spokesman said ‘he could not rebut accusations before seeing the report’ before pointing out that agents regularly save migrants’ lives.

A former agent who spoke to the two humanitarian groups said that destroying water supplies was a way to make migrants weaker and easier to find.

The groups commented: ‘This is the logic of the US Border Patrol’s policy of Prevention Through Deterrence, which in theory prioritizes threats of arrest and physical violence, while in reality kills and disappears people.’

The report finishes by calling for the Border Patrol to be disbanded and reparations paid to the families of victims.

‘We demand that US Customs and Border Protection permanently dismantle the US Border Patrol and establishes a reparations program for the families of all persons disappeared and deceased as a result of the US border policy of Prevention Through Deterrence,’ the report reads.