Donald Trump Jr acknowledged his split from wife Vanessa for the first time on Thursday evening in an Instagram post.

‘No matter what is going on bedtime cuddling with the smurf puts a Yuge smile on my face. #bedtime#daddysgirl #cuddle,’ wrote Don Jr.

He included that remark alongside a photo of himself lying in bed with his daughter Chloe, the youngest of his five children.

Just a few hours earlier, a source told DailyMail.com that Vanessa had filed divorce papers in Manhattan Supreme Court after 12 years of marriage.

That source added that Vanessa listed the divorce as uncontested, meaning that she is not asking for full custody of the children at this time and that Donald Jr does not object to the filing.

‘After 12 years of marriage, we have decided to go our separate ways,’ the pair told Page Six in a joint statement. ‘We will always have tremendous respect for each other and our families. We have five beautiful children together and they remain our top priority. We ask for your privacy during this time.’

Vanessa was photographed outside her Manhattan apartment building on Thursday morning shortly before her divorce papers were filed in court. 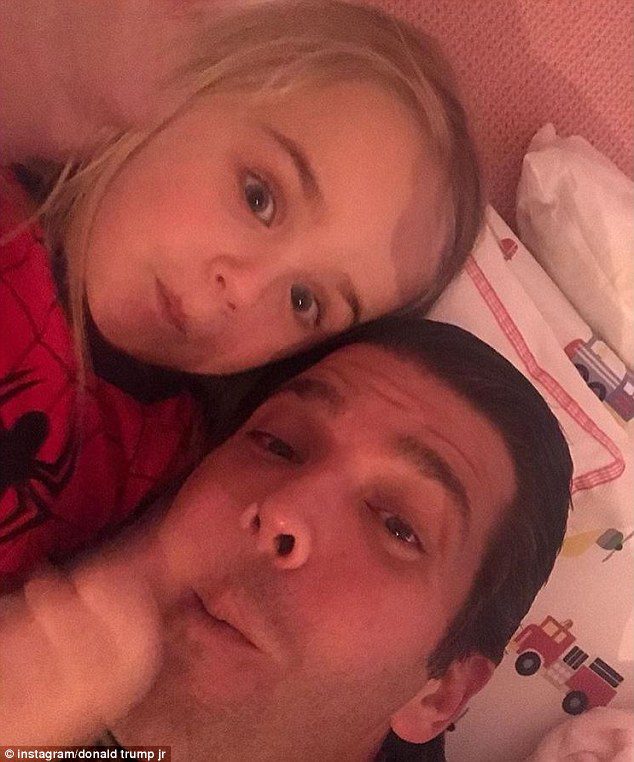 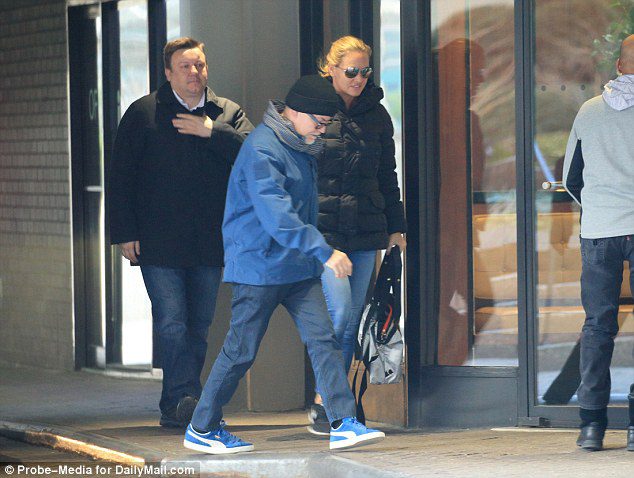 Moving on: Vanessa Trump is seen outside her Manhattan apartment building on Thursday before filing divorce papers in a Manhattan court 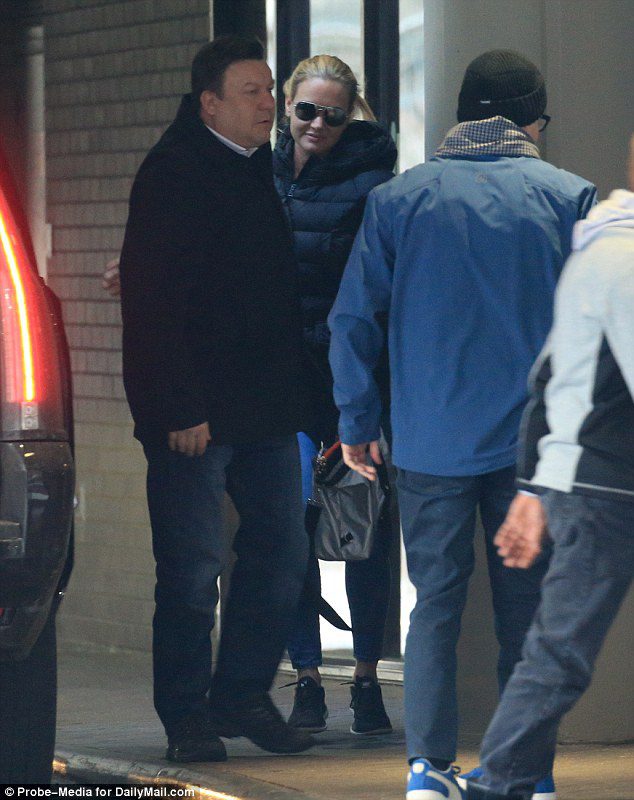 Keeping it civil: The couple have five children and a source tells DailyMail.com that Vanessa is not seeking full custody at this time 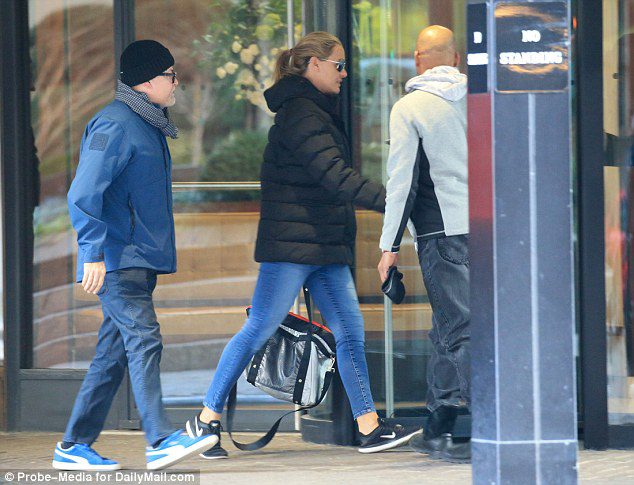 N9othing to say: Vanessa (above) hurried into her building while someone unloaded the car

Cake by the ocean: The family was last seen together in February when they all celebrated Don III birthday in Palm Beach (above) 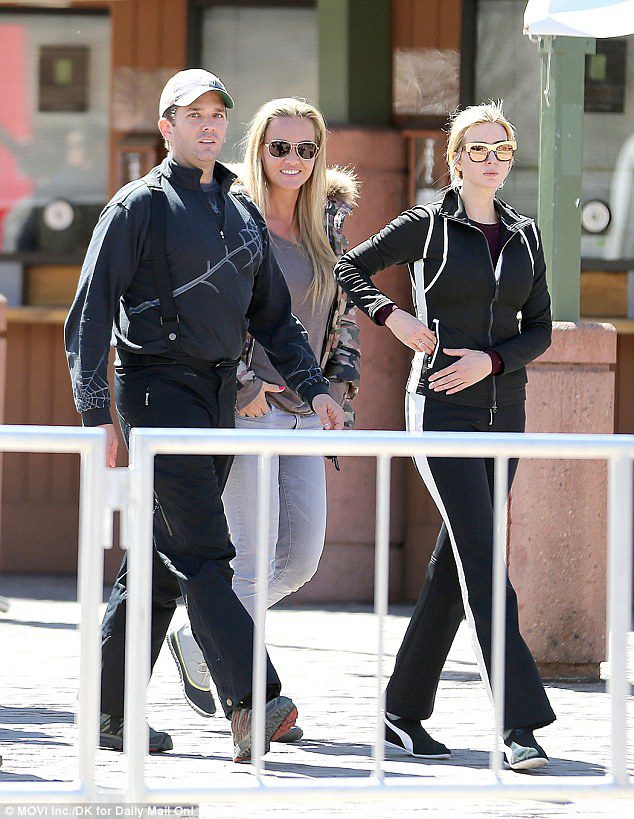 Happier times: The pair were all smiles on a family vacation to Aspen last March, but left early when their son Tristan broke his leg (Don Jr, Ivanka, and Vanessa in Aspen)

Vanessa was joined by Secret Service on Thursday, who unloaded her car outside the building.

The men began taking in empty suitcases, suggesting that the children may soon be heading off on a trip over school vacation.

It is unclear if the five children will all head off with together or if the couple will split up their brood.

This will be the first time that a child of the president has entered into divorce proceedings while their father held office.

Page Six reported on Wednesday that sources close to the pair had said that the two were leading separate lives, and had been for some time.

‘The problems have been there for a long time, the couple had hoped to stay together during the president’s time in office, but it is getting harder to resolve their issues,’ said one source.

The two have been spotted together less and less in recent months and spent almost no time with one another over the holidays at Mar-a-Lago.

Don Jr posted a number of videos on social media during the two weeks that the pair were in Palm Beach which showed him with the couple’s children but never Vanessa.

Vanessa was also absent from one of the family dinners and did not attend the annual New Year’s Eve gala, with Don Jr. instead taking his son Donnie.

It was also his birthday that night.

Then, in February, it was revealed that Vanessa was at an apartment a few blocks away from the family’s residence in Manhattan when she opened a letter addressed to her husband containing a mystery white powder.

In the wake of those reports, the two were seen together on February 13 doing the school run with their two youngest children, Chloe and Spencer.

A week later, the entire family traveled down to Mar-a-Lago for Donnie’s birthday.

Don Jr posted a photo of that to Instagram which showed everyone smiling for the camera, writing: ‘Happy birthday Donnie. Some birthday cake for my 9-year-old little man yesterday. Somehow I hit send then but it didn’t go through.’

Just before that trip, however, Don Jr spent Valentine’s Day with another lady – his daughter Kai.

‘Valentine’s Day selfie with one of my favorite Valentines. Early dinner with my girl Kai,’ wrote Don Jr on Instagram.

Vanessa meanwhile was spotted out to eat with her sons Donnie and Tristan. 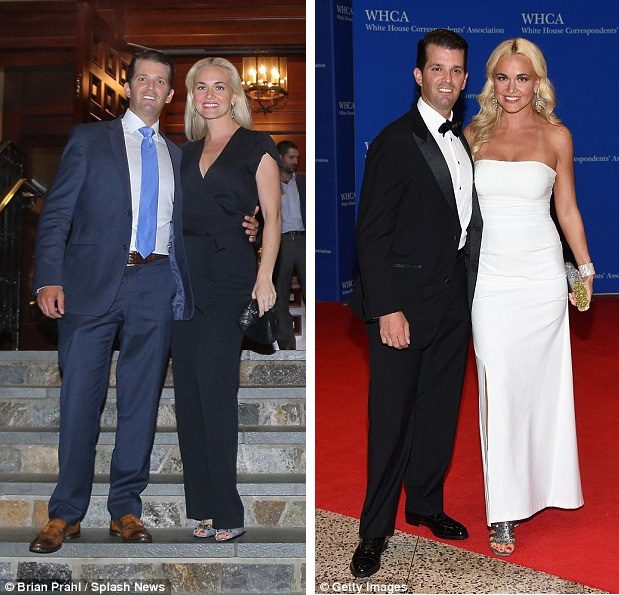 Torn apart: This will be the first time that a child of the president has entered into divorce proceedings while their father held office 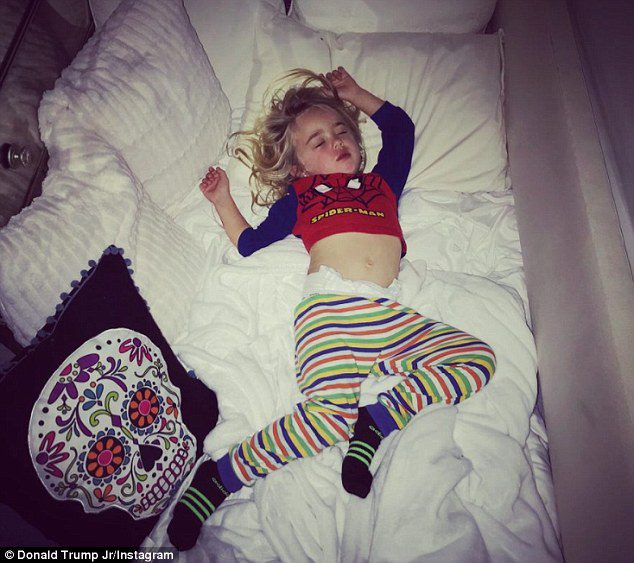 Donald Trump Jr has yet to comment on the news of his split, but did post a photo of his daughter Chloe sleeping in his bedroom on Wednesday (above)

The couple had been introduced multiple times before going on their first date, with President Trump responsible for two of those introductions.

Vanessa said in a 2006 interview that he twice introduced her to his son at a fashion show in 2003, and she finally agreed to a date when they met a third time at a mutual friend’s party.

Vanessa said that she referred to Donald Jr as ‘the one with retarded dad’ at the time.

The proposal was captured by the multiple photographers alerted to the fact that Don Jr would be proposing in front of the same jewelry store from which he obtained the ring for a heavily discounted price.

They were married at Mar-a-Lago in November 2005, though those plans were almost derailed due to Hurricane Wilma, which forced the couple to move the wedding from the club’s lawn to a more sheltered space by the pool due to the damage done by high winds.

Those nuptials took a backseat in the press however to the fact that the wedding marked one of the rare occasions when Donald and his new wife Melania came face-to-face with his ex Ivana. 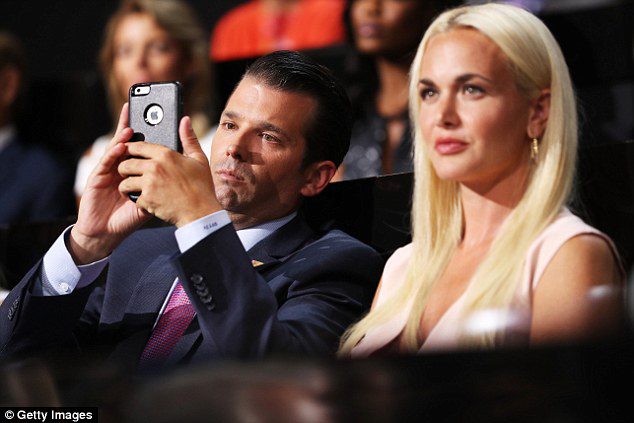 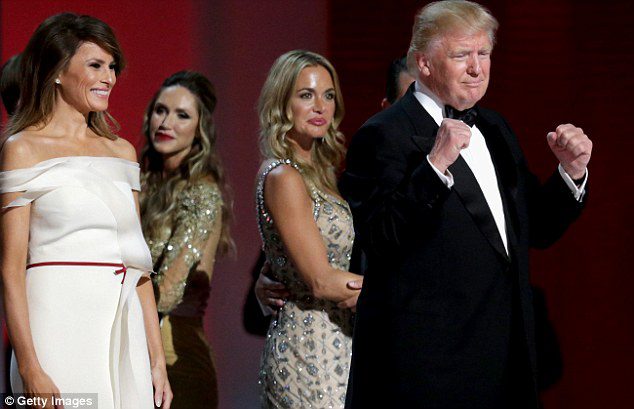 Pumped: Melania, Lara and Vanessa at the Liberty Inaugural Ball in January 2017 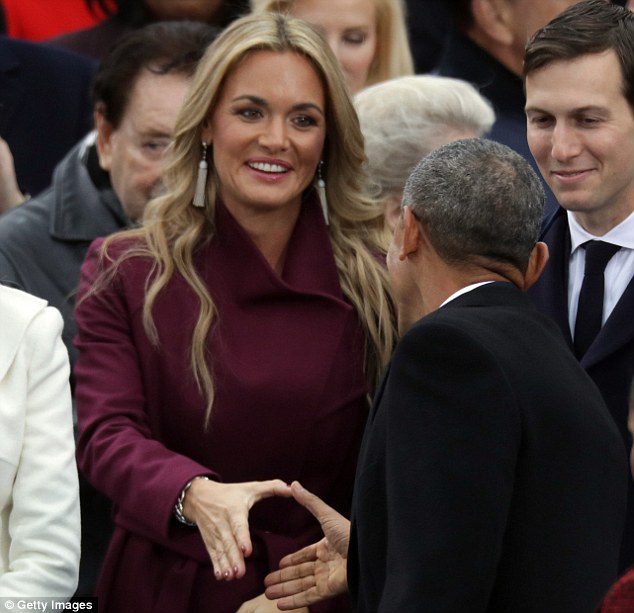 Happy meeting: Vanessa shakes hands with the outgoing president after her father-in-law’s inauguration 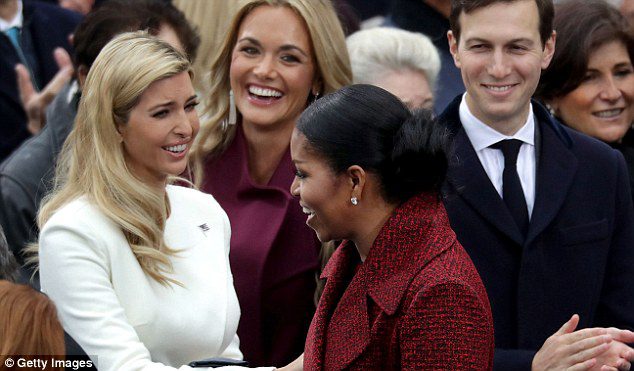 Girl talk: Vanessa is all smiles with Michelle Obama at the swearing-in ceremony back in 2017

Photos from the event show Donald and Melania smiling in the front row while Ivana looks less than pleased to have her picture taken as she sits next to her mother Marie.

Prior to marrying Don Jr, Vanessa had been linked to Leonardo DiCaprio and had a small role in the film Something’s Gotta Give.

Vanessa was very much in the spotlight prior to the couple’s wedding, but once the couple began to have children shifted her focus to raising their sons and daughters.

She gave birth to all five of the couple’s children in a span of just seven years.

In the wake of her father-in-law’s announcement that he would be running for president, Vanessa did step out on the campaign trail a bit and occasionally post on social media.

Vanessa also may have provided the first clue that she and Don Jr were leading separate lives back in November when she posted a photo of her Christmas tree of Twitter and wrote: I just finished decorating our tree with my kiddies! We are in the holiday spirit! Christmas will be here soon!’

There was no mention of her husband at all in the tweet.

She last posted a tweet that showed her with Don Jr back in June for President Trump’s birthday.

News of the divorce follows a difficult few days for Don Jr, who was campaigning for Rick Saccone in Pennsylvania.

Saccone has not lost that race at this time but is behind Democrat Conor Lamb.