A YouTube star brought new meaning to the saying ‘don’t judge a book by its cover’ with a shocking social media experiment that saw him dressing like a homeless person in order to see if staff at a restaurant would treat him any differently.

In an attempt to prove that appearances can always be deceiving, New York-based Coby Persin tested staff at a Florida eatery to see how they would react to someone based purely on what they looked like, before stunning them with the revelation that they were, in fact, dealing with a ‘billionaire’.

In a three-minute video, the 23-year-old can be seen approaching a restaurant while dressed in an assortment of scruffy clothing and carrying a large garbage bag, before asking to be seated by a staff member who is standing at the entrance. 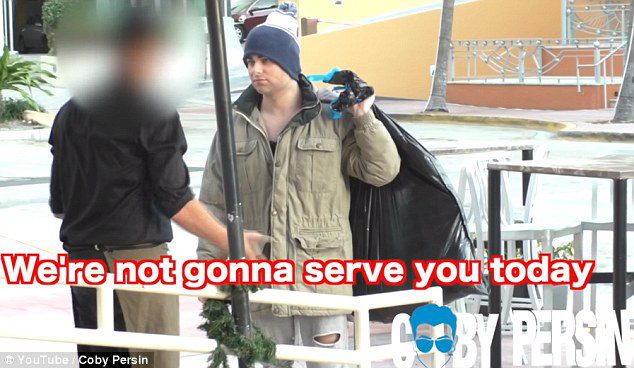 Too expensive: YouTuber Coby Persin, 23, disguises himself as a homeless person as part of a social experiment 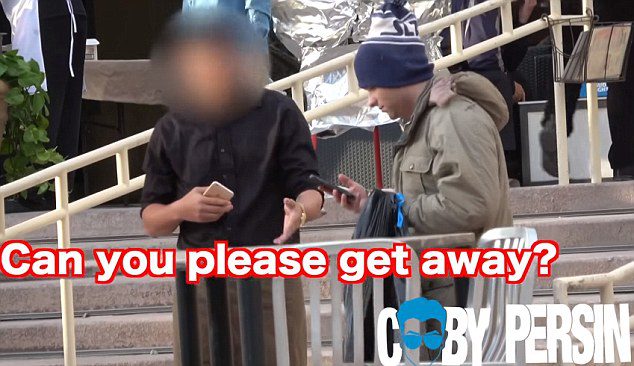 Get away: The host asks Coby to ‘please get away’ even though he was just standing there

Wasting no time, Coby approaches the man, who appears to be acting as a host, to ask for a table for himself and his friend Ronaldo.

Ensuring that he remains polite and courteous throughout their conversation, he also asks whether it would be possible to see a menu.

‘Hi, how are you? I would like to get a table for me and my friend Ronaldo – to see the menu maybe,’ he says.

But the host, whose face has been blurred out to maintain his privacy, says that he is unable to seat Coby because he believes the restaurant is ‘too expensive’ for him to afford.

‘I’m sorry. We’re not going to be able to do it, sir,’ he says while blocking Coby’s access to the eatery. ‘This place is a little too expensive for you.’

Clearly put off by the interaction, Coby decides to give the restaurant host a chance to redeem himself and asks again if there is a menu he can see. 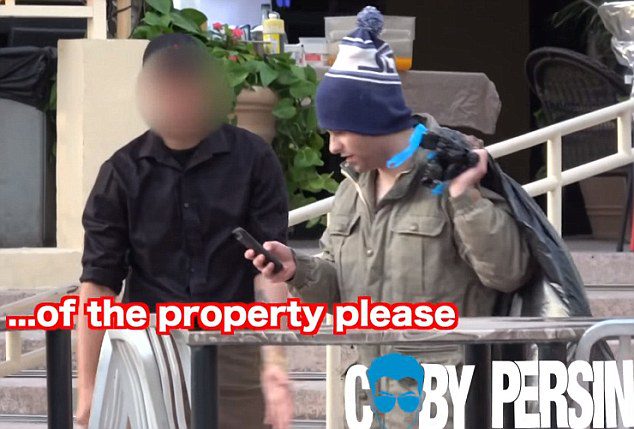 Leave: When he starts dialing his friend, Ronaldo, the host tells him to get off the property 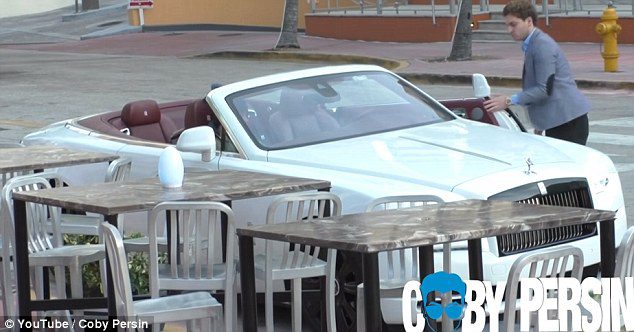 Arriving in style: Coby’s driver, Ronaldo, arrives at the restaurant in a white Rolls Royce

‘Nope,’ the host replies bluntly. ‘We can’t serve you, we’re not going to serve you today. I’m sorry about that.’

And even when Coby tries to tell him he has a lot of money, the host still refuses to serve him and says: ‘Can you please get away? Go eat at McDonald’s – some other options but not here.’

Coby then backs away from the restaurant and is heard uttering a ‘wow’ as he dials his driver Ronaldo.

But as he starts dialing, the host asks if he can make the call off the restaurant’s property.

‘Can you please get away,’ the host asks again. ‘Stand over there.’

But the host is in for quite the surprise because Ronaldo drives up to the restaurant in a Rolls Royce with a suitcase of cash in the trunk.

Ronaldo then hands the suitcase to Coby who shows it to the host. 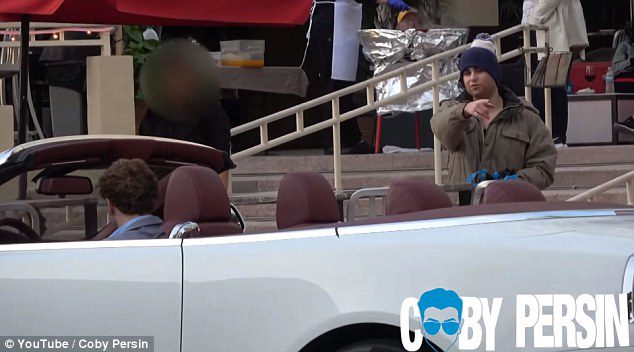 Get the cash: Coby asks Ronaldo if he can grab the briefcase that was in the trunk of the Rolls Royce 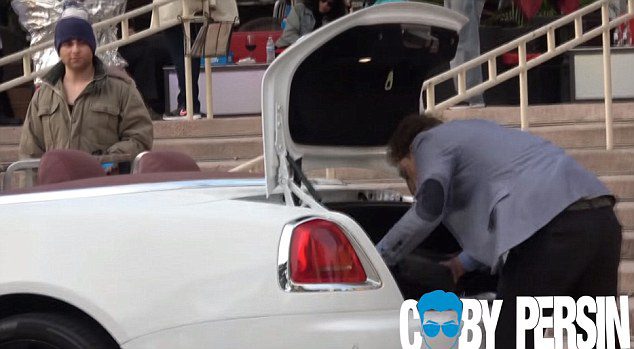 Car full of cash: Ronaldo gets the briefcase full of cash from the trunk and hands it to Coby 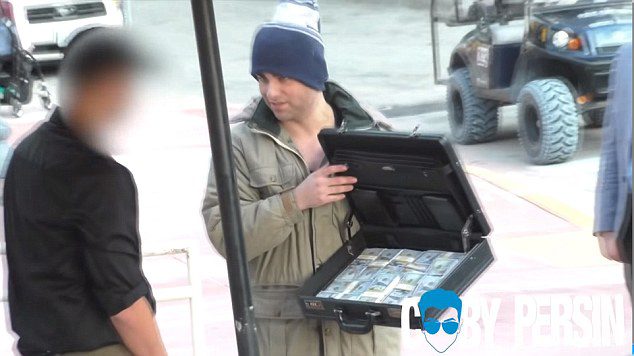 ‘I have money’: After he turns him away, Coby shows the host the money-filled briefcase

Coby says: ‘I told you I had money. What’s crazy is the way you judged people just by there appearance. I might buy this spot just I can fire you – you’re lucky.’

Ronaldo and Coby then go to the ‘steak spot down the street’ leaving the host speechless and ashamed.

This isn’t the first social experiment video, Coby has done. One of his most recent ones involved the vlogger planting trees in New York City potholes.

He came up with the green-thumbed idea after he himself hit a pothole and ruined the tire of his car.

He said: ‘When I was driving around New York City, I hit a pothole and my tire popped and I had to buy a new one.’

‘So I was thinking to myself, how as New Yorkers can we avoid these potholes? Had I seen a plant inside the pothole, I would have driven around the plant and not hit the pothole.’