The mother of the child model at the center of the H&M race row has branded the backlash to the image ‘unnecessary’.

Terry Mango, of Stockholm, Sweden, spoke out after the retailer faced accusations of racism over an image of her son Liam, five, wearing a jumper emblazoned with ‘coolest monkey in the jungle’.

In a series of Facebook posts, Ms. Mango urged critics – including high profile musicians and sports stars – to ‘get over it’ and to ‘stop crying wolf’.

Manchester United footballer Romelu Lukaku, basketball player LeBron James and music mogul P Diddy are among the celebrities who slammed the advert as shoppers called for a boycott of the chain. Meanwhile, musician The Weeknd, who has collaborated and modeled for H&M said he was cutting all ties with the retailer.

The outrage prompted H&M to remove the image from its UK and US websites and to issue a statement saying it was ‘deeply sorry’. 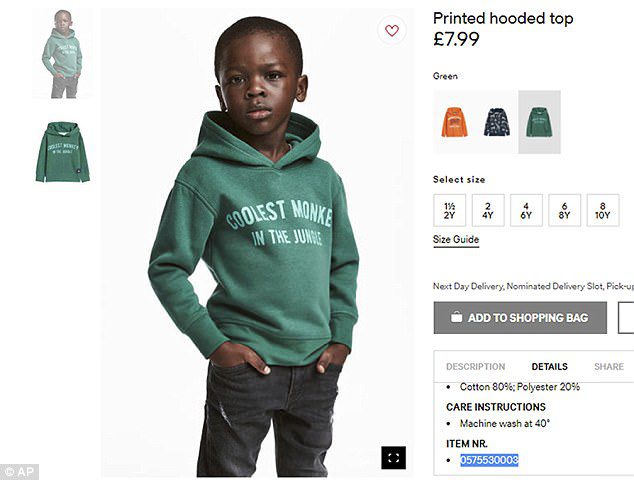 Controversial: H&M has come under fire this week over an advert featuring a black child model wearing a jumper emblazoned with ‘Coolest Monkey in the Jungle’ 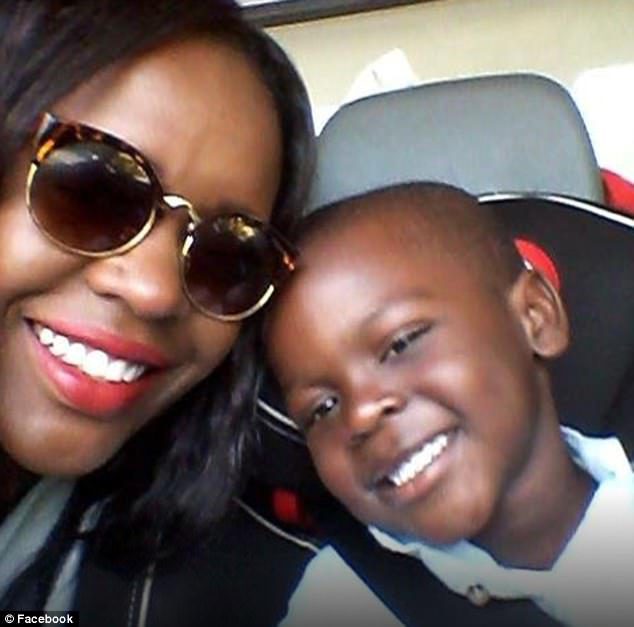 Speaking out: Terry Mango, the mother of the child model, has branded the uproar ‘unnecessary’ 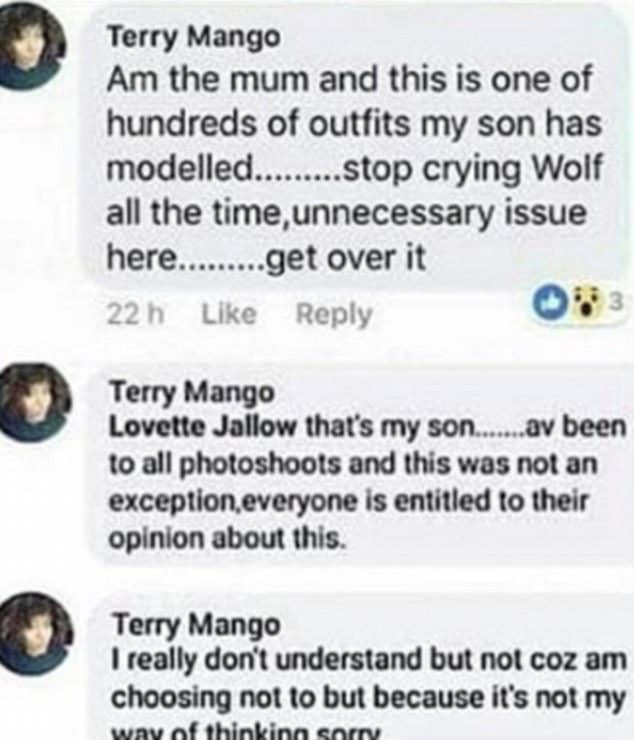 However, Ms. Mango, who moved to Sweden from Nigeria, has blasted the fierce public response in a series of Facebook posts that have been widely circulated on social media.

She wrote: ‘Am the mum and this is one of the hundreds of outfits my son has modeled… stop crying wolf all the time, the unnecessary issue here… get over it [sic].’

The dismissive comment was met with surprise by some social media users, who questioned why Ms. Mango was endorsing the ‘racist’ image.

Clarifying her stance, Ms. Mango explained she ‘really doesn’t understand’ the issue, adding: ‘Not coz am choosing not to but because it’s not my way of thinking sorry [sic].’ In a separate post, she added: ‘Everyone is entitled to their opinion.’

Speaking to Gulf News, Ms. Mango later revealed she had been targeted by trolls over her comments, including those who used ‘monkey’ as a racial slur.

She said: ‘How can you fight racism if you make racist remarks?’ she said. ‘You cannot try to defend my son and use the same words to describe me.’ 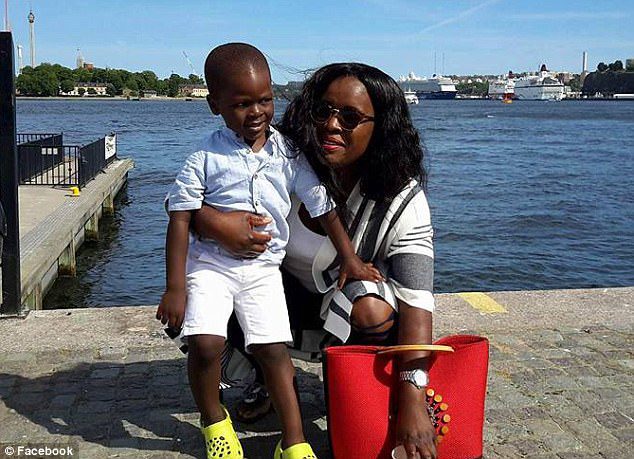 Hands-on: Terry, above with her son, said she had been at the shoot when the photo was taken

Meanwhile, Terry’s uncle, Kenyan-born music promoter Clay Onyango, said the family is ‘waiting for an apology’ but that he did not believe H&M had been deliberately racist.

He said: ‘I think they overlooked it,. Maybe it’s just one of those mistakes that one makes. But there are many questions you can ask – how did they miss that? We spoke to them and they said it wasn’t meant to be racist.’

The image advertising the £7.99 jumper was removed from H&M’s US and UK websites shortly after news of the outrage broke.

The retailer quickly issued a statement apologizing to ‘anyone it may have offended’.

However, the image was still shared thousands of times on social media and drew comments from dozens of high-profile critics.

Manchester United footballer Romelu Lukaku posted an edited picture of the boy on his Instagram page with ‘Black is Beautiful’ on the hoody instead.

He then wrote: ‘You’re prince soon to be a king. Don’t let anybody tell you different… #blackexcellence.’

NBA star LeBron James has also slammed H&M for the advert. He fumed on social media: ‘U got us all wrong! And we ain’t going for it! Straight up!

‘Enough about y’all and more of what I see when I look at this photo. I see a Young King!! The ruler of the world, an untouchable Force that can never be denied!

‘We as African Americans will always have to break barriers, prove people wrong and work even harder to prove we belong but guess what, that’s what we love because the benefits at the end of the road are so beautiful!’ 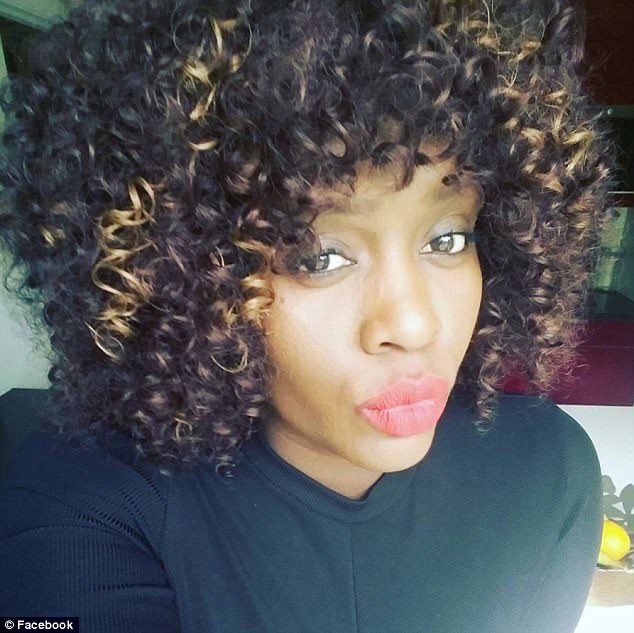 US rapper Pusha T and singer The Weeknd have also lashed out at H&M vowing never to work with or buy from the chain again.

Pusha T posted an edited version of the advert with a crown on the model’s head and hoody, with ‘King of the Wold’ in bold type.

He also wrote the caption: ‘Accurate. Never shopped with you ever… not even for Tshirts @hm’.

While The Weeknd tweeted: ‘Woke up this morning shocked and embarrassed by this photo. I’m deeply offended and will not be working with @hm anymore…’ 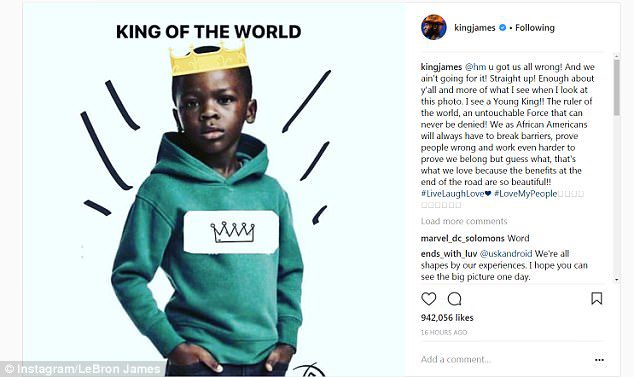 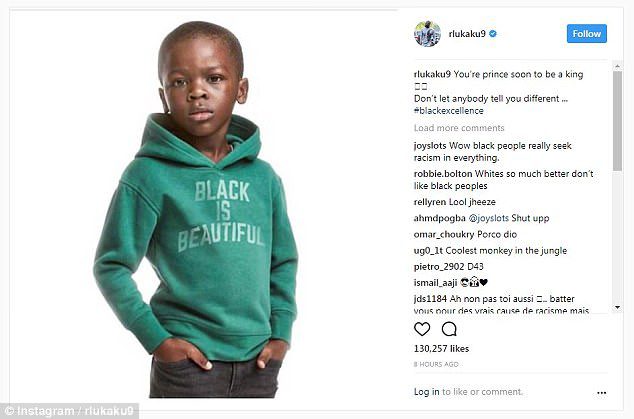 Even those who doubted the brand was being derogatory admitted there should have been more aware of how the image could be perceived.

The campaign group Models Of Diversity, which pushes for more diversification across the industry, said H&M should be ‘ashamed’.

The brand also took to Instagram to express further apology, it said: ‘We understand that many people are upset about the image of the children’s hoodie. We, who work at H&M, can only agree.

‘We’re deeply sorry that the picture was taken and we also regret the actual print.

‘Therefore, we’ve not only removed the image from our channels but also the garment from our product offering.’