Humans must leave Earth in the next 200 years if we want to survive.

That was the stark warning issued by Professor Stephen Hawking in the months before his death today at the age of 76.

The legendary physicists believed that life on Earth could be wiped out by a disaster such as an asteroid strike, AI or an alien invasion.

He also warned over-population, human aggression and climate change could cause humanity to self-destruct.

He believed, if our species had any hope of survival, future generations would need to forge a new life in space. 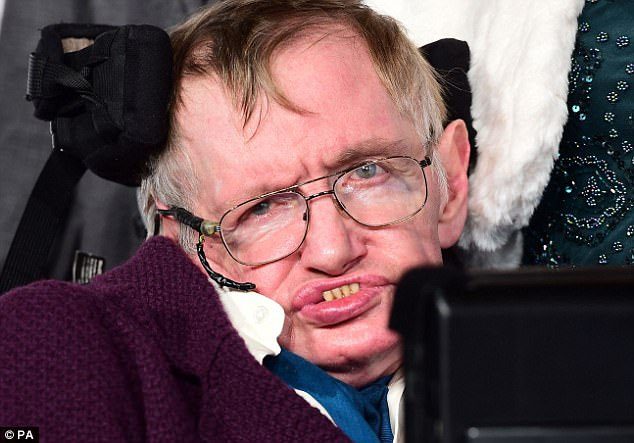 Humans must leave Earth within 200 years if we want to survive. That was the stark warning issued by Professor Stephen Hawking in the months before he death today at the age of 76

One of Hawking’s main fears for the planet was global warming.

‘Our physical resources are being drained, at an alarming rate. We have given our planet the disastrous gift of climate change,’ Hawking warned in July.

‘Rising temperatures, reduction of the polar ice caps, deforestation, and decimation of animal species. We can be an ignorant, unthinking lot.’

Hawking said that Earth will one day look like the 460°C (860°F) planet Venus if we don’t cut greenhouse gas emissions. 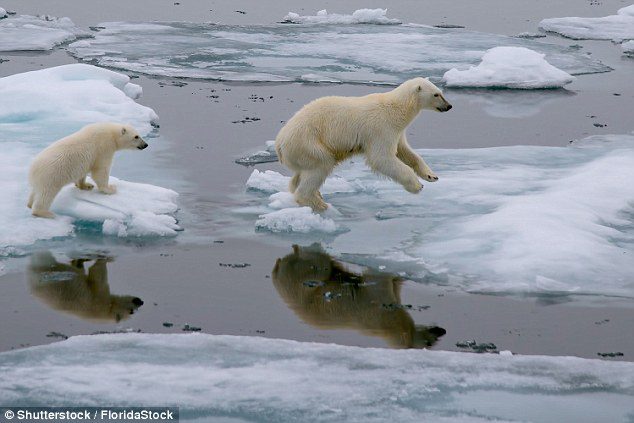 ‘Next time you meet a climate change denier, tell them to take a trip to Venus. I will pay the fare,’ Hawking quipped.

The physicist also believed President Donald Trump’s decision to withdraw from the Paris Climate Agreement has doomed our planet.

He warned Trump’s decision would cause avoidable damage to our ‘beautiful planet’ for generations to come.

‘We are close to the tipping point where global warming becomes irreversible,’ the celebrated scientist told BBC last year.

If global warming doesn’t wipe us out, Hawking believed Earth would be destroyed by an asteroid strike.

‘This is not science fiction. It is guaranteed by the laws of physics and probability,’ he said.

‘To stay risks being annihilated.

‘Spreading out into space will completely change the future of humanity. It may also determine whether we have any future at all.’

‘If we succeed we will send a probe to Alpha Centauri within the lifetime of some of you alive today,’ he said.

Astronomers estimate that there is a reasonable chance of an Earth-like planet existing in the ‘habitable zones’ of Alpha Centauri’s three-star system. 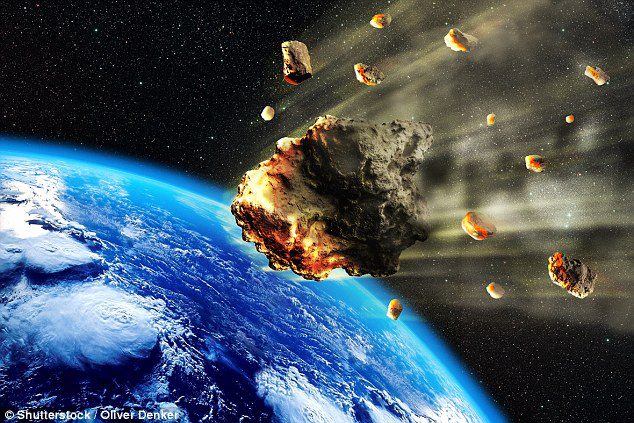 If global warming doesn’t wipe us out, Hawking believed Earth would be destroyed by an asteroid strike (stock image)

‘It is clear we are entering a new space age. We are standing at the threshold of a new era’, said Hawking.

‘Human colonization and other planets is no longer science fiction, it can be science fact.’

Hawking believed that In the long run, the human race should not have all its eggs in one basket, or on one planet.

‘I just hope we can avoid dropping the basket until then’, he said.

Hawking claimed that AI will soon reach a level where it will be a ‘new form of life that will outperform humans.’

He even went so far as to say that AI may replace humans altogether, although he didn’t specify a timeline for his predictions.

The chilling comments during a recent interview with Wired.

He said: ‘The genie is out of the bottle. I fear that AI may replace humans altogether. 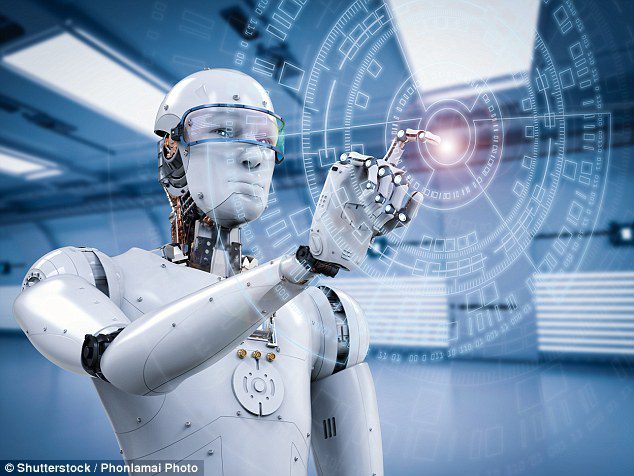 Hawking even went so far as to say that AI may replace humans altogether, although he didn’t specify a timeline for his predictions (stock image)

‘If people design computer viruses, someone will design AI that improves and replicates itself.

‘This will be a new form of life that outperforms humans.’

He also he said the AI apocalypse was impending and ‘some form of government’ would be needed to control the technology.

During the interview, Hawking also urged more people to take an interest in science, claiming that there would be ‘serious consequences’ if this didn’t happen.

Hawking has previously warned aggression is humanity’s biggest failing and could ‘destroy it all’.

The remark was made back in 2015 in response to a question about what human shortcomings he would change.

Talking to an audience in the Science Museum, the renowned scientist said ‘The human failing I would most like to correct is aggression’.

‘It may have had a survival advantage in caveman days, to get more food, territory or a partner with whom to reproduce, but now it threatens to destroy us all’, writes the Independent.

He said he feared evolution has ‘inbuilt’ it into the human genome, commenting that there was no sign of conflict lessening.

What’s more, he said the development of militarised technology and weapons of mass destruction could make this instinct even more dangerous.

He said empathy was the best of human emotions and meant we could be brought together in a loving state.

Hawking also warned that if we ever did find aliens they would probably wipe us out.

‘As I grow older I am more convinced than ever that we are not alone,’ he said in a video posted online called Stephen Hawking’s Favourite Places.

The clip showed him visiting different locations across the cosmos, writes the Independent.

One of the places he visits is Gliese 832c, a planet that people speculate could be home to alien life.

‘One day we might receive a signal from a planet like Gliese 832c, but we should be wary of answering back.

‘Meeting an advanced civilization could be like Native Americans encountering Columbus. That didn’t turn out so well’, he said.

Hawking became increasingly convinced there was another life out there as he got older and he led a new project called the Breakthrough Listen project to find out.

He said that any alien civilization would be ‘vastly more powerful and may not see us as any more valuable than we see bacteria.’

The renowned scientist also warned that a man-made catastrophe could spell the end for our species. 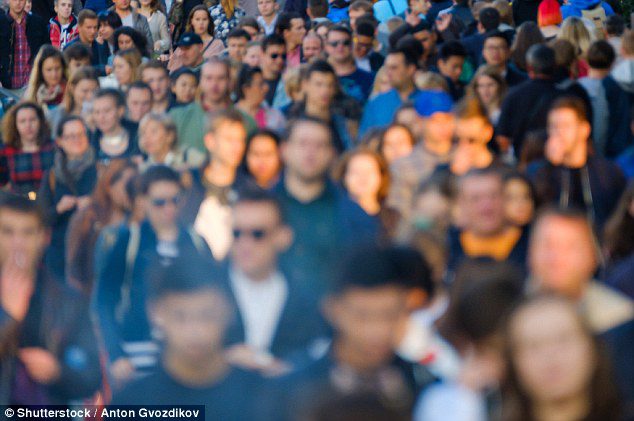 The renowned physicist believed that life on Earth is at an ever-increasing risk of being wiped out by a disaster, such as asteroid strikes, epidemics, over-population (stock image) and climate change

‘For me, the really concerning aspect of this is that now, more than at any time in our history, our species needs to work together,’ Hawking said in a Guardian opinion piece in 2016.

‘Together, they are a reminder that we are at the most dangerous moment in the development of humanity’, he said.

In November 2016, Hawking was more conservative in his estimates. 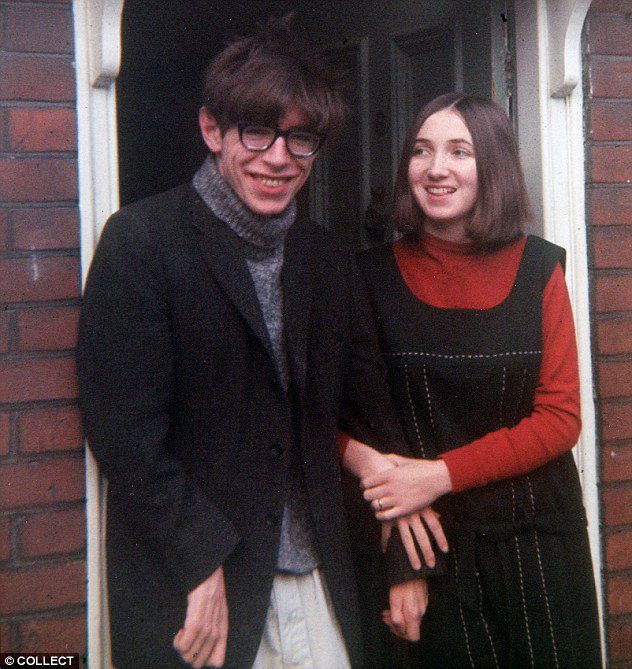 Jane and Stephen in the mis-1960s, shortly after his diagnosis with motor neurone disease and being given two years to live

He warned that humans could not survive another 1,000 years on ‘fragile’ Earth.

At a talk in Cambridge, Hawking gave a one-hour whirlwind history of man’s understanding of the origin of the universe from primordial creation myths to the most cutting-edge predictions made by ‘M-theory’.

He said: ‘Perhaps one day we will be able to use gravitational waves to look back into the heart of the Big Bang.

‘Most recent advances in cosmology have been achieved from space where there are uninterrupted views of our Universe but we must also continue to go into space for the future of humanity. 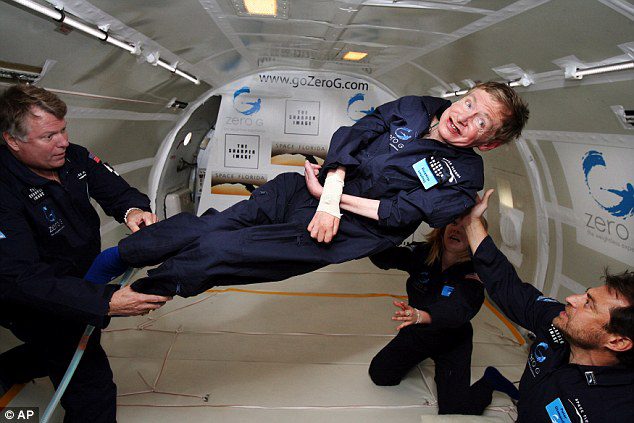 Astrophysicist Hawking floats on a zero-gravity jet in April 2007. The modified jet carrying Hawking, physicians, and nurses, and dozens of others first flew up to 24,000 feet over the Atlantic Ocean off Florida

‘I don’t think we will survive another 1,000 years without escaping our fragile planet.’

Hawking, who has said he wanted to go into space on Virgin boss Richard Branson’s Ride Virgin Atlantic spaceship, continued: ‘I, therefore, want to encourage public interest in space, and I have been getting my training in early.’

Hawking added: ‘It has been a glorious time to be alive and doing research in theoretical physics.

‘Our picture of the universe has changed a great deal in the last 50 years and I am happy if I have made a small contribution.

‘The fact that we humans who are ourselves mere collections of fundamental particles of nature have been able to come so close to understanding the laws that are governing us and our universe is a great achievement.’

Hawking has previously described his views on the future of space travel, in the afterword of the book, ‘How to Make a Spaceship.’

He said: ‘I believe that life on Earth is at an ever-increasing risk of being wiped out by a disaster, such as a sudden nuclear war, a genetically engineered virus, or other dangers,’ he said.

‘I think the human race has no future if it doesn’t go to space.’

Making a poignant plea to his young audience of students from the University of Oxford, where he himself did his undergraduate degree, he said: ‘Remember to look up to the stars and not down at your feet.

‘Try to make sense of what you see and wonder about what makes the universe exist.

‘Be curious and however, life may seem there’s always something you can do and succeed at – it matters that you don’t just give up.’