An Arkansas woman who lost her father four years ago but texted his phone every day to share updates on her life, received the shock of her life when one day she got a response from a bereaved man who lost his own daughter in a car crash.

Chastity Patterson, 23, of Newport texted her father’s old phone number on Thursday, the night before the fourth anniversary of his death.

‘Hey Dad, it’s ME. Tomorrow is going to be a tough day again!’ Patterson said, not expecting an answer.

After sending a long post mourning her father’s passing and mentioning her triumphs including graduating college and beating cancer, she received a surprising reply. 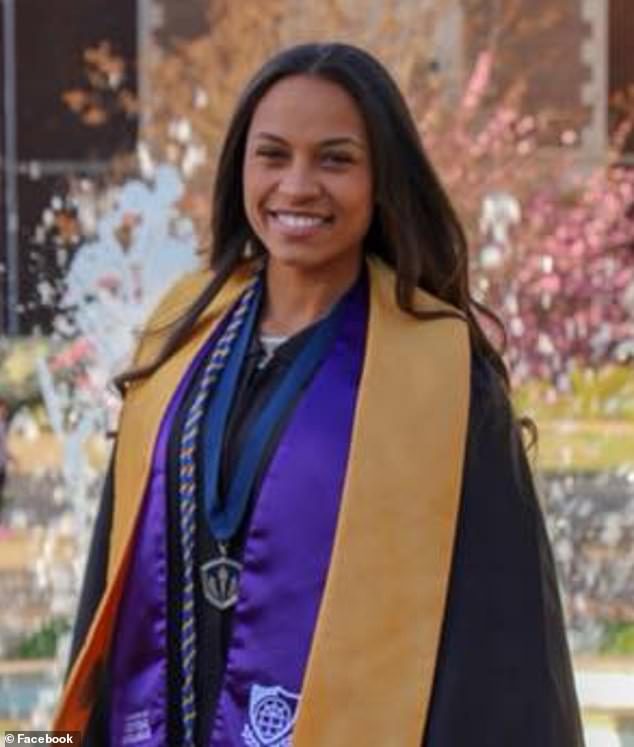 Arkansas woman Chastity Patterson, 23, texted her dead father’s phone every day for four years and finally got a reply on Thursday from a man named Brad who lost his own daughter in 2014 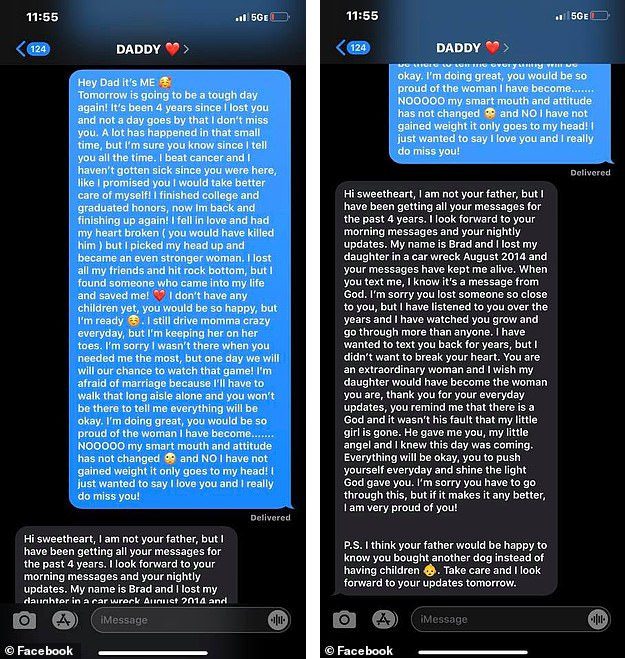 On Thursday she sent a long message on the eve of the four year anniversary of his death and received a response for the first time. A man named Brad answered saying he had been reading her messages every day and lost his own daughter in a devastating car crash in 2014

She shared the discovery on Facebook on Friday writing: ‘I text my dad everyday to let him know how my day goes, for the past four years! Today was my sign that everything is okay and I can let him rest!’ The post went viral racking up over 265,000 shares

‘Hi sweetheart, I am not your father, but I have been getting all your messages for the past four years. I look forward to your morning messages and your nightly updates. My name is Brad and I lost my daughter in a car wreck August 2014 and your messages kept me alive. When you text me, I know it’s a message from God,’ Brad said.

‘I’m sorry you lost someone so close to you, but I have listened to you over the years and I have watched you grow and go through more than anyone. I have wanted to text you back for years, but I didn’t want to break your heart,’ he said.

He went on to praise Chastity for her growth, calling her his own ‘angel’ after he lost his own daughter in a devastating car crash.

‘You are an extraordinary woman and I wish my daughter would have become the woman you are, thank you for your everyday updates, you remind me that there is a God and it wasn’t his fault that my little girl is gone,’ he said.

‘He gave me you, my little angel and I knew this day was coming. Everything will be okay, you to push yourself every day and shine the light God gave you. I’m sorry you have to go through this, but if it makes it any better, I am very proud of you.

Shocked and touched, Chastity shared the post on Facebook on Friday where it went viral racking up over 265,000 shares. 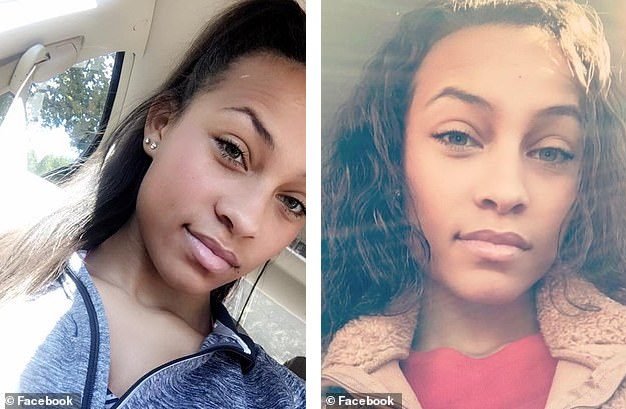 ‘You are an extraordinary woman and I wish my daughter would have become the woman you are, thank you for your everyday updates, you remind me that there is a God and it wasn’t his fault that my little girl is gone,’ Brad said to Chastity

She captioned her post: ‘I text my dad every day to let him know how my day goes, for the past four years! Today was my sign that everything is okay and I can let him rest!’

After her post captured the hearts of thousands of online readers, she shared an update post explaining that her dad Jason Ligons was not her biological father but was the patriarch figure in her life who looked after her since she was a child.

‘He never missed a school dance, prom, my games and YES he would give me long talks about my mouth and attitude. I had to introduce my boyfriends to him (If I was allowed to date) and he would act like a normal dad and give us the long talk,’ she said.

‘I’ve cried with him, told him everything and even became very independent because he took the time to love me and show me what happiness looks like. SO YES Jason was my father but he was a role model for many kids in our town,’ she added.

‘I shared my messages for my friends and family to see that there is a God and it might take 4 years, but he shows up right on time!’ she said.