A nine-year-old boy fought terminal cancer long enough to meet and name his newborn baby sister and told his devastated parents shortly before he died: ‘You’re only allowed to cry for 20 minutes.’

Bailey Cooper, from Bristol, battled Non-Hodgkin lymphoma for 15 months and was determined to live love enough to hold his new sibling.

His mother Rachel, 28, gave birth to her daughter in November and Bailey named her Millie. The family has now released pictures of him cradling Millie, for the first time after she was born and the day before he died on Christmas Eve. 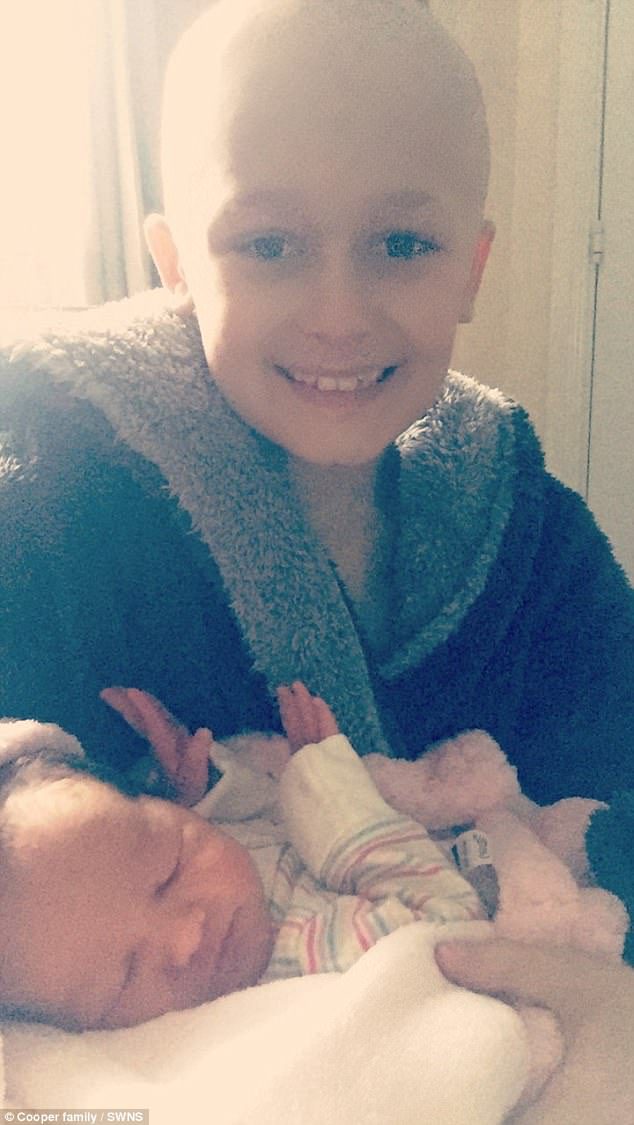 Adoring big brother: Bailey Cooper died from Non-Hodgkin lymphoma on Christmas Eve. He was pictured holding his baby sister, Millie, the day before he died 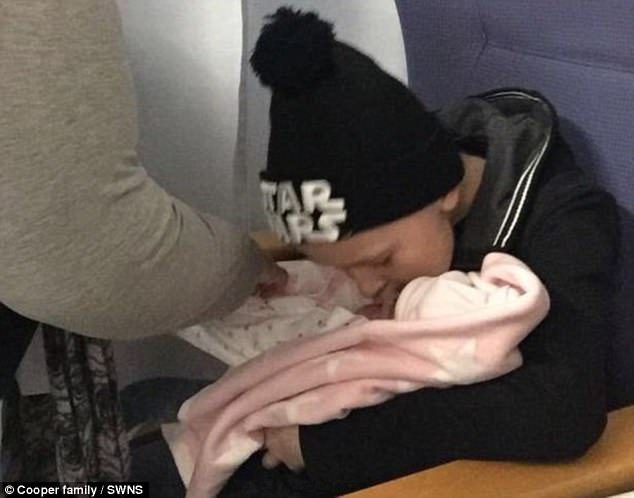 First cuddle: Bailey holding baby sister Millie for the first time after she was born in November

His parents Lee and Rachel clutched his hands as he passed away, having bravely smiled through his treatment since he was diagnosed in the summer of 2016.

Bailey’s mother said: ‘We didn’t think he would last that long, but he was determined to meet Millie.

‘It got to the end of November, and Millie was born. He hugged her and did everything an older brother would do – change her, wash her, sing to her.’

His father, 30, added: ‘Doctors said he was going to go before Millie was born.

‘He didn’t. He fought, and on the way to the hospital, he said we should call her Millie.

‘But the moment after he met her, he began to taper off quickly. He was slipping away.’ 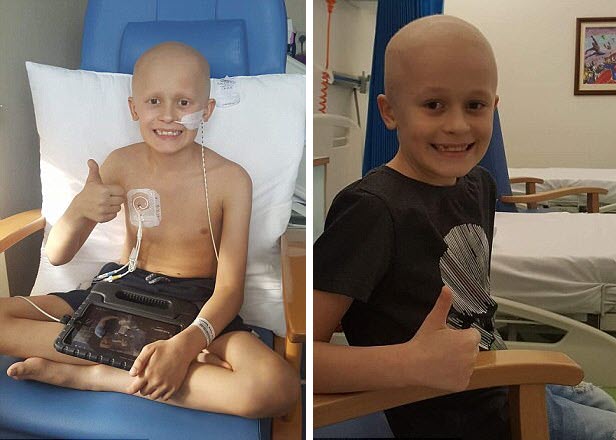 Brave: The youngster’s proud mother and father, Rachel and Lee, said their son smiled the whole way through his treatment

The family knew Bailey was unlikely to survive to celebrate Christmas but encouraged him to write a list of gifts he would like.

But his parents noticed they seemed to be chosen with his younger brother, Riley, aged six, in mind.

Knowing that he was dying, Bailey had planned his own funeral and asked that all guests dressed up in superhero outfits.

He told his parents in their last family meeting: ‘You’re only allowed to cry for 20 minutes. You have to take care of Riley and Millie.’ 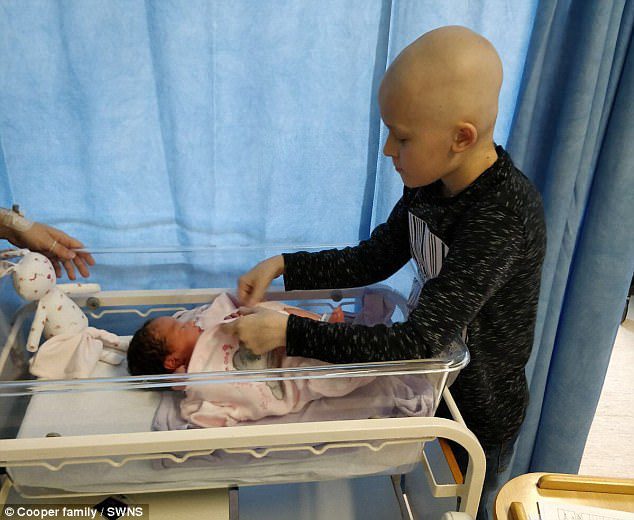 Bailey, from Bristol adored his sister Millie, and mother Rachel said: ‘He hugged her and did everything an older brother would do – change her, wash her, sing to her’ 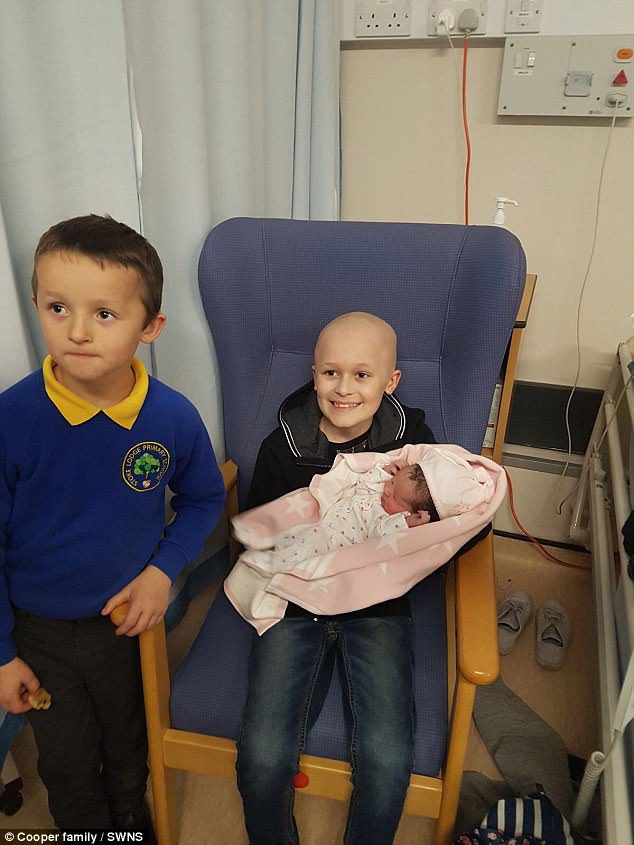 After baby sister Millie was born in November, Bailey began to become more ill. On the morning he passed away, his family told him, ‘It’s time to go Bailey. Stop.’

And when his grandmother said she wished he could take his place, Bailey told her: ‘That is really selfish Nan. You have grandchildren to take care of.’

After being taken to a hospice on December 22, Bailey’s family gathered by his bedside and read him stories to keep him company.

Rachel said: ‘He knew he was not going to be here for Christmas, but we tried to get him to put together a Christmas list.

‘He said he didn’t want to, but we encouraged him to.

‘The moment we said “stop”, he took his last breath and had just the one tear come out of his eye. It was peaceful.’ 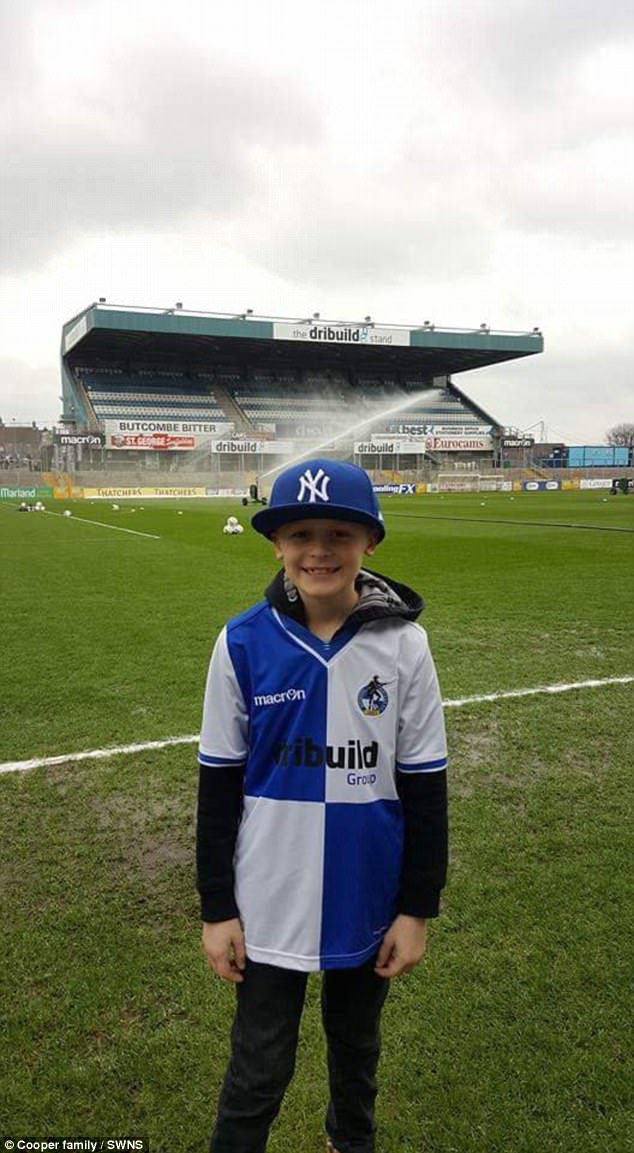 Bailey pictured in hospital with his younger brother Riley. Bailey’s parents noticed his Christmas list seemed to be written with Riley in mind 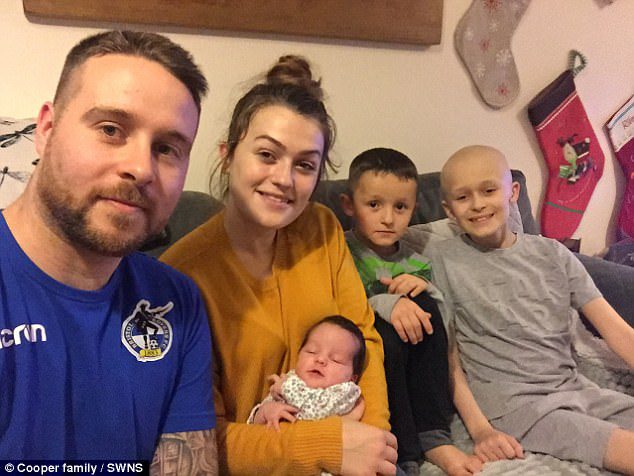 Sweet hearted: Bailey became ill in the summer of 2016, and by the time he was diagnosed with cancer it was already at Stage 3 (pictured: the Cooper family)

Lee added: ‘We were going to get everything he asked for. But most of the stuff he asked for was things he never played with.

‘They were more suited for his little brother. He had picked everything for Riley because he knew he was not going to play with them.’

Bailey first became ill in the summer of 2016, and after a series of tests in September he was diagnosed with Non-Hodgkin Lymphoma, which develops in the network of vessels and glands in the body.

By the time it was discovered, it was already in Stage Three.

Doctors treated cancer with chemotherapy and steroid medication but we’re optimistic that Bailey would recover, and in February 2017 he went into remission.

Bailey returned to Stoke Lodge Primary School in Patchway, Bristol, and was subject to regular check-ups and routine MRIs every three months.

Bailey pictured in hospital with his dad, Lee. The 9-year-old had battled the cancer for 15 months before he died

But when the family went on holiday at Easter to a Devon holiday park, they were dealt a devastating blow.

Lee said: ‘On the second day, we were in Paignton Zoo when we had a phone call from the hospital that he had relapsed and they needed him back in. Bailey showed signs that he was breathless and tired.’

The family was told there was a 70 percent survival rate, and chemotherapy began again.

‘The doctors threw the book at it, and told us even if he survived it, the long-term effects will last for the rest of his life,’ Lee said.

‘He had a stem cell transplant. We had to try everything we could.’ Last Saturday, hundreds of people turned out to pay their respects to Bailey, including Bristol Rovers FC captain Tom Lockyer

In July, the family was told that Bailey was in remission, but by August cancer had come back – and they were told there was nothing more which could be done.

The cancer had spread quickly and lumps were found in Bailey’s chest, lungs, liver, and stomach.

Hundreds of people turned out to pay their respects to Bailey on January 6, including Bristol Rovers FC captain Tom Lockyer, who struck up a friendship with the young football fan.

Lee said: ‘Bailey smiled through it all. He pulled funny faces and made people laugh, even though he was in so much pain.’