Nearly eight years after Chris Norton was left paralyzed in a college football accident, he wed the woman of his dreams in a charming Southern ceremony where the pair were surrounded by tearful loved ones and friends.

Chris, of Port Saint Lucie, Florida, 26, has been bound to a wheelchair since he tragically suffered a spinal cord injury back in October 2010 – when had been playing football his freshman year for Iowa’s Luther College in a game versus Central College.

During what was just the start of a life-long recovery process, Chris returned to school in August 2011. He later started his wildly successful charity, the Chris Norton Foundation, to help other people in his shoes who have suffered similar debilitating injuries.

Aside from the physical setbacks, Chris was left with emotional strain after the life-altering accident. He worried that he would experience trouble finding his soulmate, as he had hoped to settle down one day and start a family. 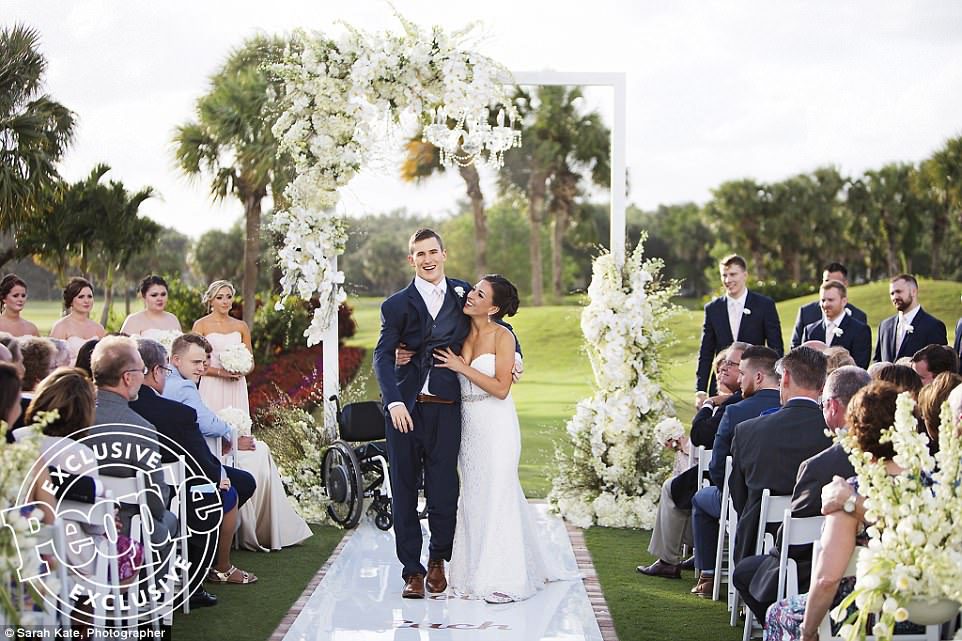 In this People magazine photo, Chris Norton is seen being assisted down the aisle by his new bride, Emily Summers, at their wedding in Jupiter, Florida on April 21

In August 2013, he gave the scary world of online dating a shot. That’s where he eventually matched with Emily Summers, now 25, a Christian Iowa State University student, who was employed at a facility where she helped care for abused youth, the pair explained in an exclusive interview with People TV.

The pair instantly clicked – and Emily helped him find a facility where he would regain some of his physical strength in order to walk down the aisle on graduation day.

Emily gushed to People about her man: ‘I was extremely drawn to him and his story, and how he wasn’t just going to give up. That’s how we first connected.’

Chris proposed the morning of graduation – in May 2015 – and Emily was there by his side to proudly assist him down the aisle, as thousands of people in the crowd cheered them on.

‘It was incredible to see how motivated he was,’ Emily said of his progress. ‘When he sets his mind to something, he does it. That’s why I fell in love with him.’ 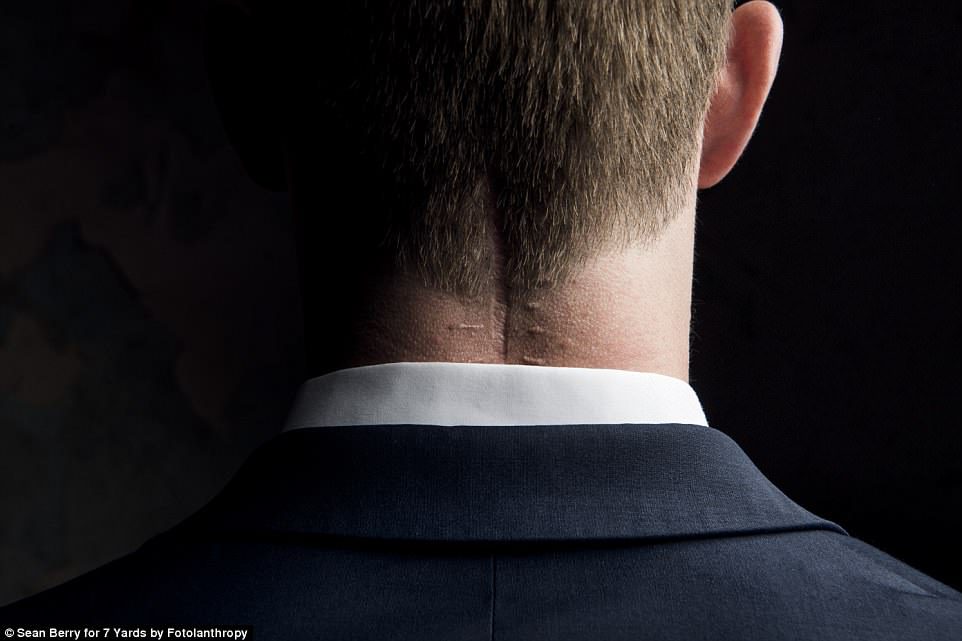 Chris, of Port Saint Lucie, Florida, has been bound to a wheelchair since he tragically suffered a spinal cord injury in October 2010. He was left paralyzed from the neck down

Fast forward to three years later – and Emily was there to help walk her groom down the aisle at their wedding on April 21.

Emily and Chris beamed as they spoke about the details of their matrimony to People TV at the Abacoa Golf Club venue in Jupiter, Florida.

Chris was seen sitting in his wheelchair, with his brand new wife standing next to him and her arm around his shoulder as he spoke about the called the ‘best day of his life’ on social media.

He said to People TV: ‘She came down the aisle… and I was just tearing up. I just feel so blessed and I just feel so fortunate. Oh my gosh. That’s my bride, and we’re about to get married.

‘I just got all emotional. I’m just so thankful. It’s so beautiful… (her) dress and veil and earrings. Everything was just perfect.’ 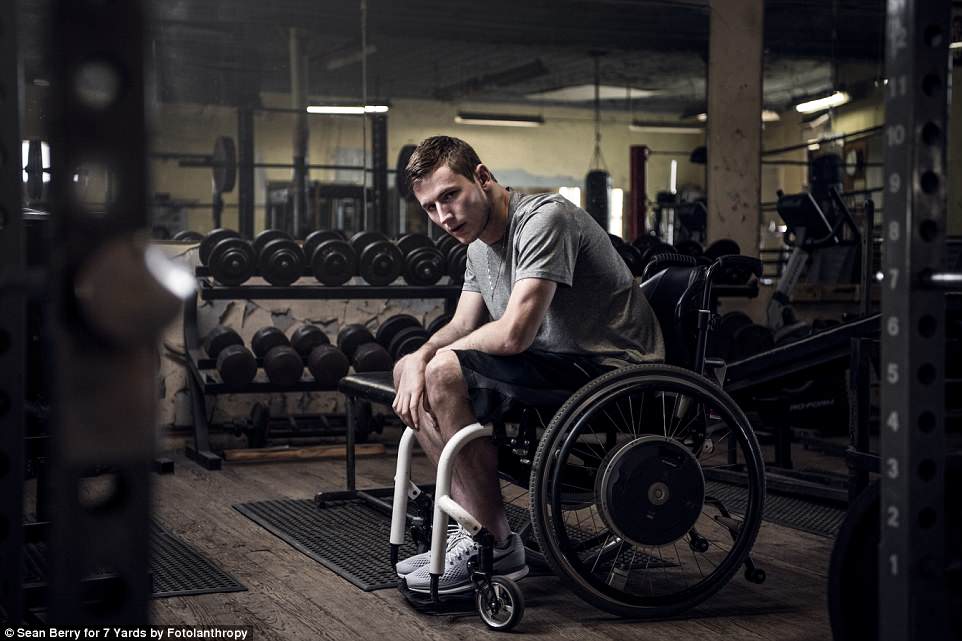 This photo from 7 Yards: The Chris Norton Story – is a documentary about Chris’ life and accident that left him paralyzed 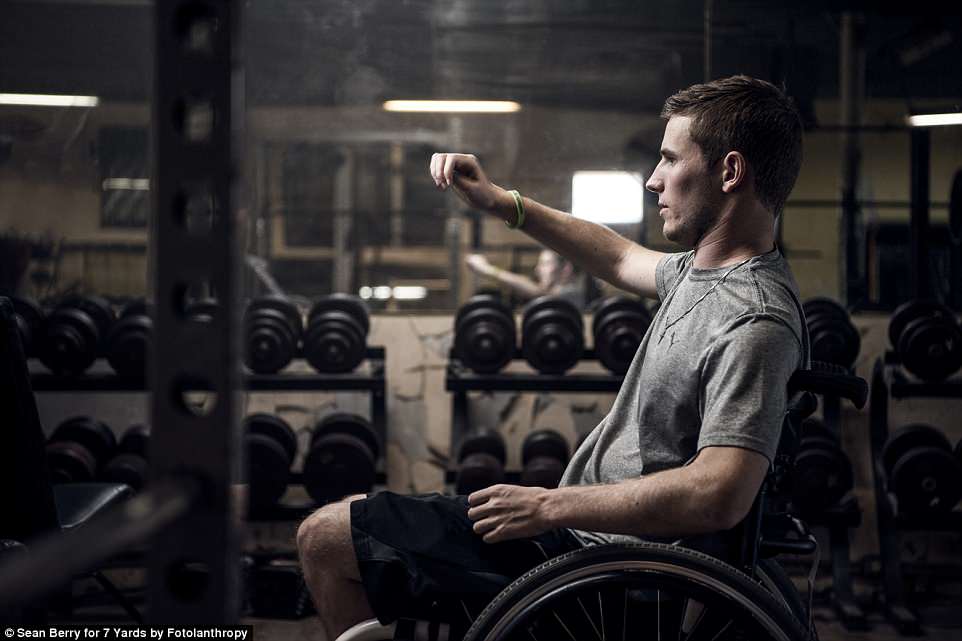 Chris is seen exercising while in his wheelchair. He was left paralyzed from a football incident his freshman year for Iowa’s Luther College in a game versus Central College 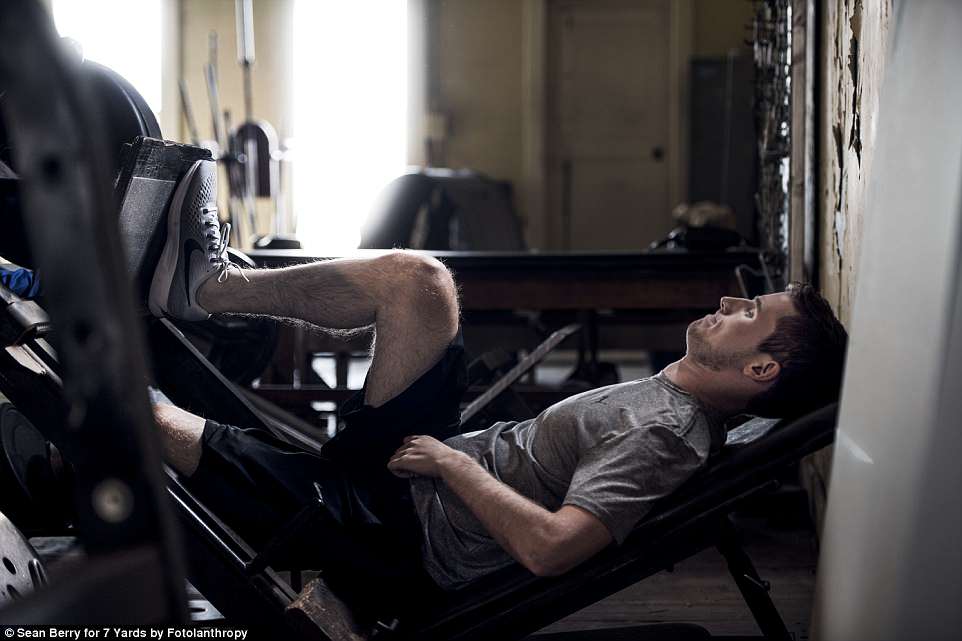 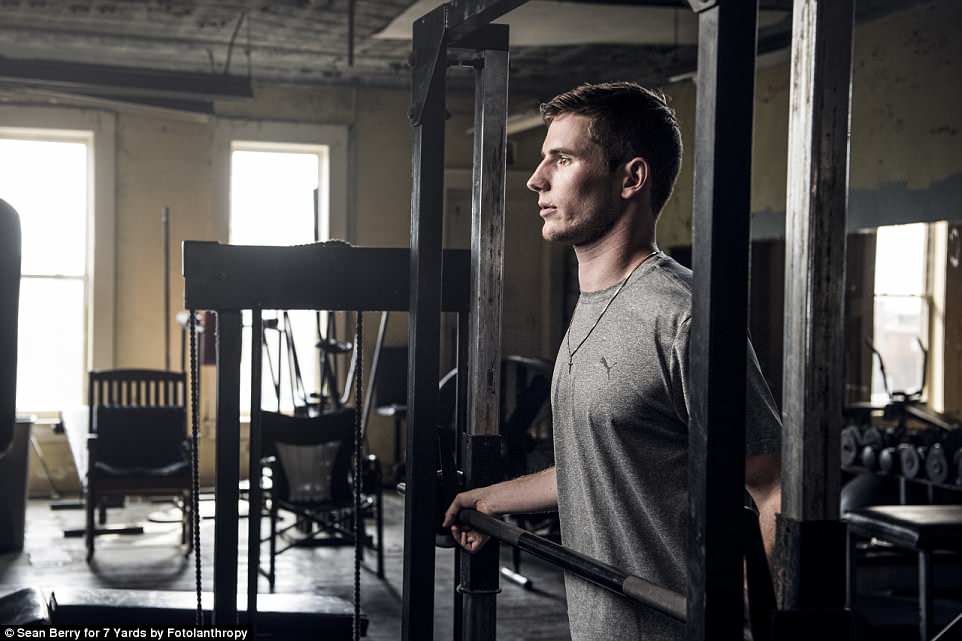 Chris looks on in this photo as he works out in the gym. Through grit and faith, he retrained his body and spirit to walk the most important yardage of his life

Stunning photos and video from the pair’s everyday life and big day was captured by 7 Yards by Fotolanthropy.

The Nortons, donned in their wedding attire, explaining details about how Chris walked down the aisle on the happy pair’s big day to People.

The motivational speaker made his way seven yards down the aisle with the assistance of his bride in front of roughly 200 guests.

Loved ones were seen crying happy tears as they watched the pair exchange vows in awe and Emily help her hubby out of his wheelchair for their first kiss as husband and wife.

Tear-jerking footage from the ceremony shows Emily help hold Chris as they make their way back up the aisle following their ‘I dos’. 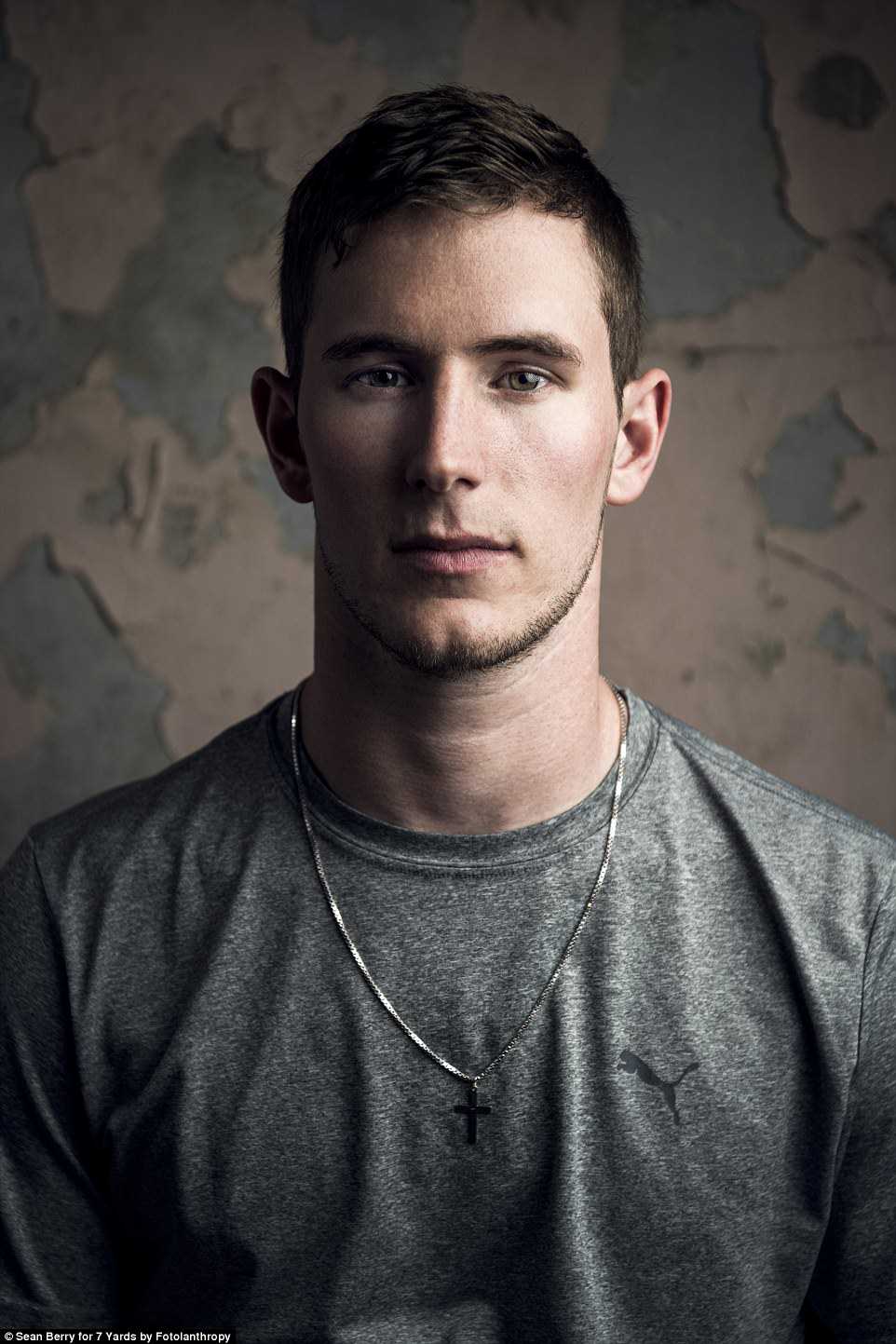 Chris called his wedding day to Emily ‘the best day of his life’ on Facebook. He told People: ‘The accident brought me to her… and that is the biggest blessing’

Chris said: ‘I just didn’t know how the steps would go. So I was just in the zone and wanted to take those nice steps and take my time and enjoy the moment too.

‘A couple steps were more difficult than others but I was able to push through it and do it. Just to go from not even being able to take a step to be able to smoothly walk seven yards.’

Chris further told People feature story out this week: ‘The accident brought me to her… and that is the biggest blessing.

‘I was waiting for that girl who made me feel alive and someone I wanted to spend the rest of my life with, and then here comes Emily. I knew she was on the one.’

The new groom shared a heartwarming status on his Facebook page Thursday evening.

‘This walk isn’t about the physical act of walking it is about not letting your challenges and setbacks keep you down, it’s about how we are all stronger with love, and it is about trusting in God even when you feel hopeless,’ Chris wrote.

‘From being told I had a 3% chance to ever move anything below my neck to walking my wife Emily Norton down the aisle 7 Yards. There is no doubt that you will be inspired. Thank you Fotolanthropy for your hard work on this!’

Footage of the trailer can be viewed here.