Millions of newborn babies are affected by an opioid epidemic nationwide, and according to The National Institute of Drug Abuse, a baby is born suffering from opioid withdrawal every fifteen minutes. These babies suffer in pain before they experience anything else when they come to this world. 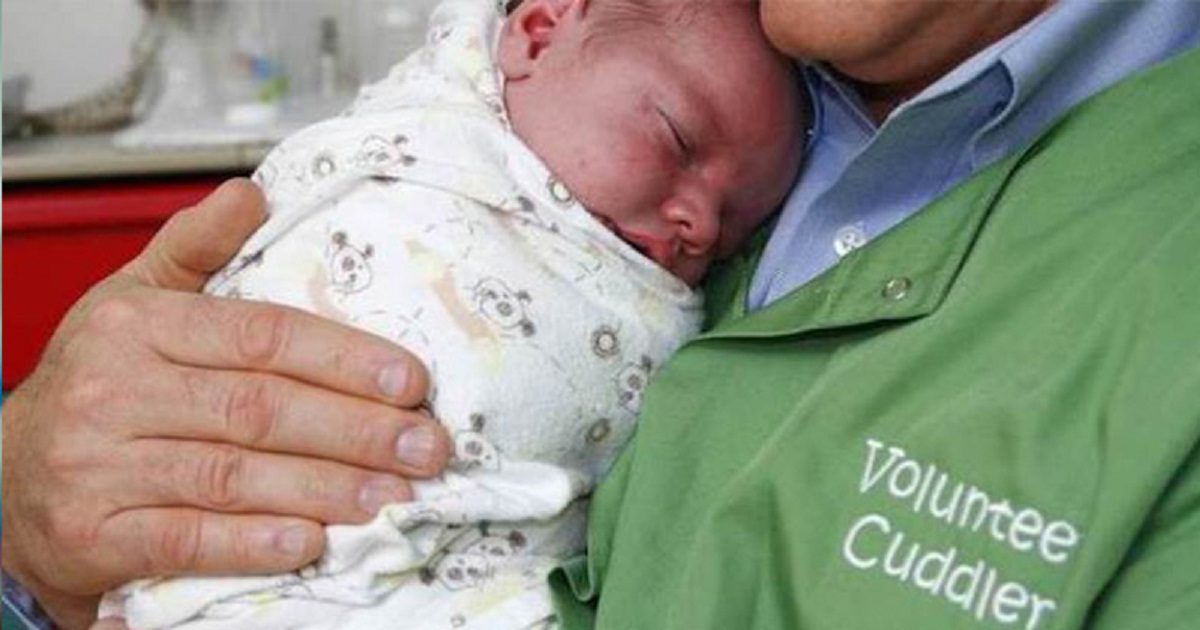 These babies from mothers who suffer from addiction end up in Neonatal Intensive Care Unit (NICU) – an ICU for infants and hospitals across the country receive volunteer help by citizens who serve as ‘baby cuddlers’.

These people give the needed love and affection to these babies and rock the infants to sleep. The cuddler programs are becoming part-time jobs in Iowa, Virginia, San Antonio and Massachusetts.

The most babies with neonatal abstinence symptoms (NAS) in Texas are born in the University Hospital in Bexar Country, San Antonio, so the hospital asked from more help from baby cuddlers.

Doug Walters, an Army Veteran was among the first to volunteer and has been a part-time baby cuddler for over three years now. These babies experience seizures, tremors, overly increased reflexes, body stiffness, and tight muscles, and are prone to gastrointestinal problems, and breathing issues.

Nurse Laurie Weaver, who has worked in the NICU for 27 years, adds that there are three to four hundred born with the syndrome annually in Bexar County, so the need for volunteers is greater than it has ever been. Namely, the human touch is so vital to these babies’ recovery.

At the hospital, she says that they can have three and four babies assigned to us a day, and they need to be fed every three hours, so they don’t always have time to hold them. Therefore, it is wonderful when there s someone else there that can hold them for you and talk to them.

According to Dr. Meredith Flores, a pediatrician who takes care of babies in the NICU at the hospital, babies with NAS who are held and cuddled do much better. She says that they notice a big difference in the scores (in) the babies that either the mom, or a volunteer, or someone is there holding them all day.

She says that at times, the dose of the medication they require is lower, and they are able to wean faster off of that dose.

Vicki Agnitsch, a former nurse who is a part of the Cuddler Volunteer program at Blank Children’s Hospital in Des Moines, Iowa, says that touch is extremely important for babies, and without it, there would be a failure to thrive.

She claims that the physical touch and cuddling the infants receive reduces the need for administered medications. She says that when they know that someone touches them they feel safety and warmth that they crave for.

They had that inside their mother and lost it when they came to this world, so all of that swaddling, touch, and talk helps their development.

A cuddling program has also been established in Warrenton, Va.’s Fauquier Hospital, in conjunction with the administration of morphine as soon as the infants are born. Cheryl Poelma, director of women says that these babies are not coordinated with their suck, they cannot eat well, they may sneeze a lot, have loose stools, and this is all part of withdrawing.

Therefore, volunteers sit, and rock the infants, holding them tight. These babies keep their hands close to their chests and like to suck on pacifiers, so the stimuli are reduced due to the rocking, sucking, keeping them in a quiet environment.

Within a few weeks, the infants show the first signs of improvements, the eye contact is better, they feed better, are not that fussy, and start to sleep better. Apparently, it takes a little to make a huge difference in the world, after all.

If you are willing to help, Uplift published a list of some other hospitals where you can offer your services: