Thousands of students have walked out of their classrooms in protest over gun laws as they showed support for the teen survivors of Florida’s Marjory Stoneman Douglas High shooting who are rallying in the state’s Capitol.

Students from across the country participated in the mass walk out on Wednesday to honor the 17 people killed in the deadly massacre in Parkland, Florida a week ago.

They chanted ‘never again’ and ‘I will not be a victim’ and joined hands and held them aloft at about 2.20pm – around the time the February 14 rampage began.

It took place as thousands of others, including massacre survivors, converged on Florida’s Capitol to ramp up the pressure on lawmakers to enact tougher gun control measures. 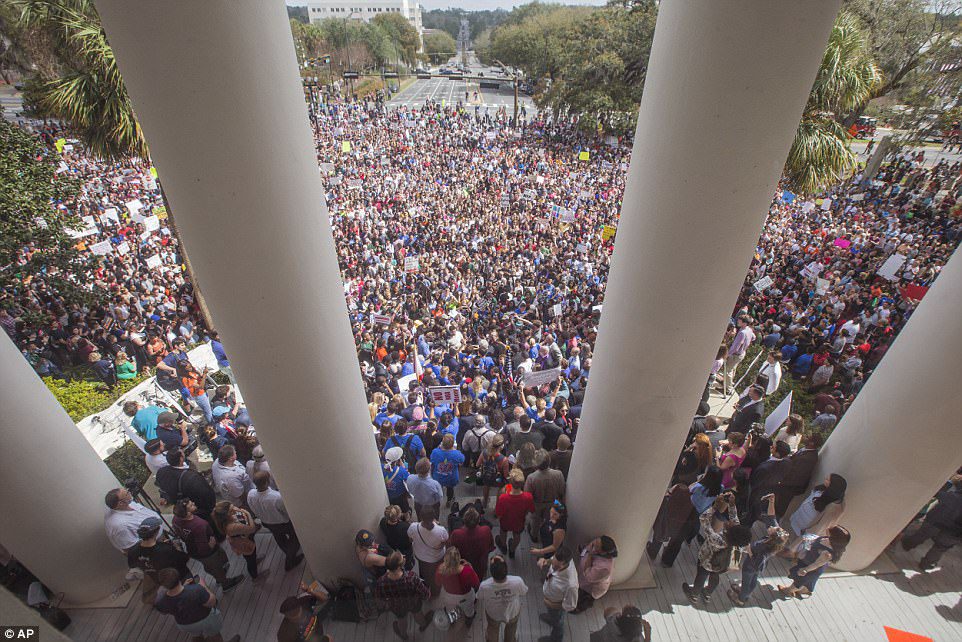 About 2,000 students, parents and teachers gathered outside Marjory Stoneman Douglas High School on Wednesday to protest gun laws a week after the tragedy Holding signs reading ‘Never Again’ and ‘Be The Adults, Do Something,’ students from Marjory Stoneman Douglas High rallied with thousands of supporters outside the imposing white stone-columned capitol building in Tallahassee.

‘I am here to demand change from my government,’ student Lorenzo Prado told the crowd. ‘To let these victims lives be taken without any change in return is an act of treason to our great country.’

‘To let our fellow countrymen fall beside us without fighting back is to be equal to leaving a soldier to die on the battlefield.’

More than 100 students from Stoneman Douglas traveled eight hours in buses on Tuesday to meet with state legislators and demand they take action on gun laws.

‘We’re what’s making the change. We’re going to talk to these politicians… We’re going to keep pushing until something is done because people are dying and this can’t happen anymore,’ said Alfonso Calderon, a 16-year-old junior.

‘My classmates and I are probably the most determined group of people you will ever meet,’ said student Sofie Whitney. ‘People are talking about how we aren’t serious because we’re children, but… we’re serious.’

Several hundred people protested outside of the Florida House of Representatives while lawmakers were in session on Wednesday.

The protesters were upset that the Republican-controlled chamber refused to take up a measure a day earlier that would have banned assault rifles and large capacity magazines.

The crowd burst into chants of ‘vote them out’ and ‘we’re students united, we’ll never be divided.’

The noise could be heard inside the chamber but business went on uninterrupted. 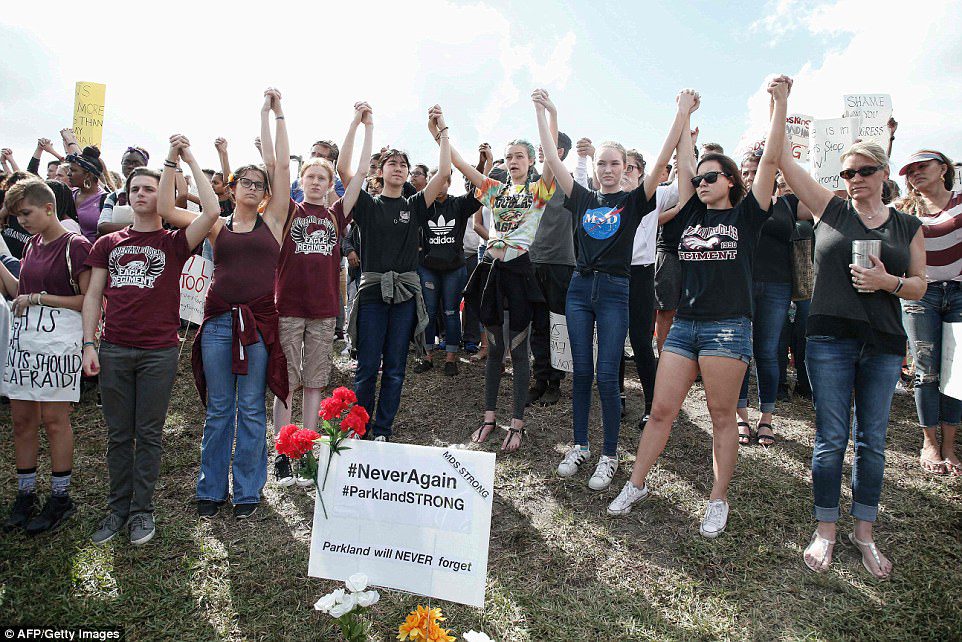 Marjory Stoneman Douglas High students chanted ‘never again’ as they joined hands and held them aloft at about 2.20pm – around the time the February 14 rampage began 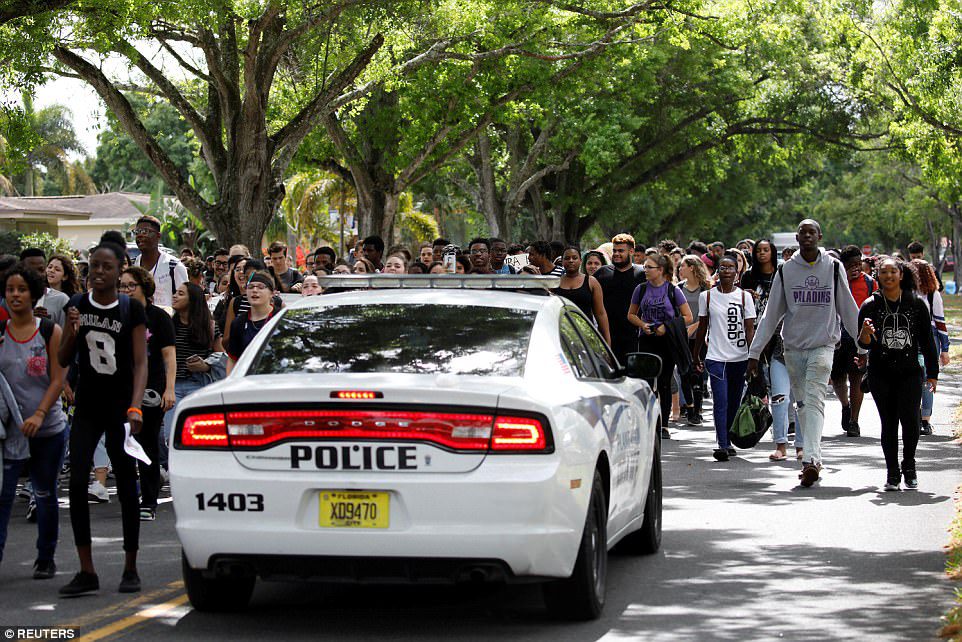 Students from South Plantation High School walk on the street during a protest in Plantation, Florida on Wednesday Students of Coral Glades High School, a high school less than four miles from the Parkland shooting scene, hold signs as the participate in a school walk for gun law change 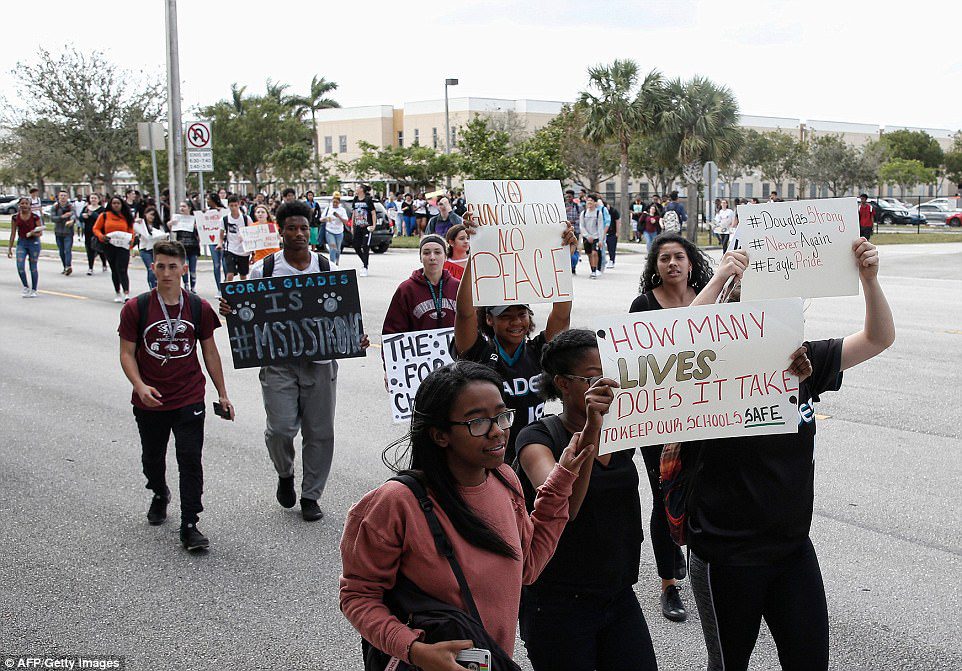 Hundreds of teens from Western High School in Davie, Florida carried large signs as part of their walk out protest on Wednesday 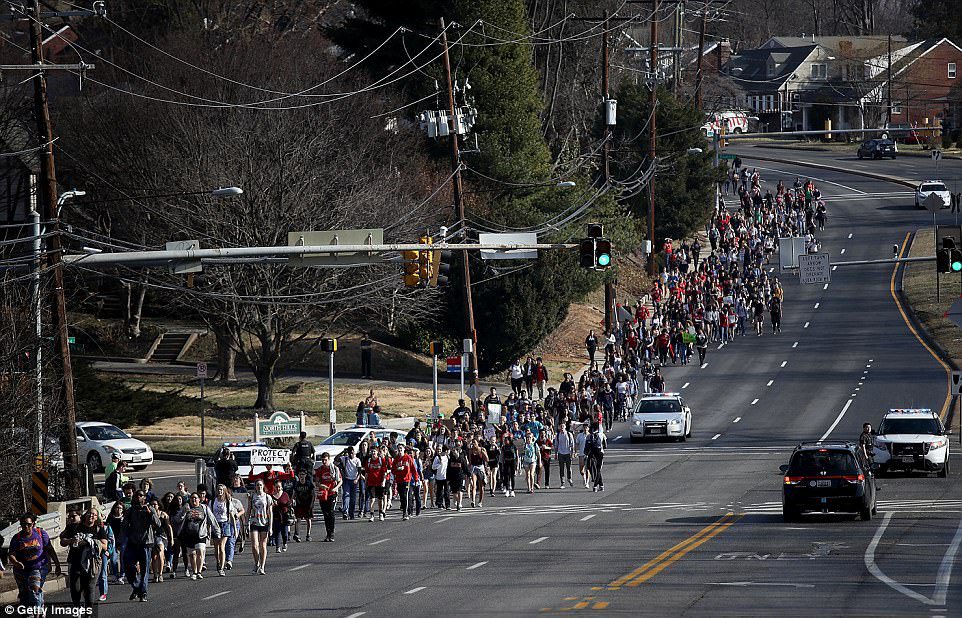 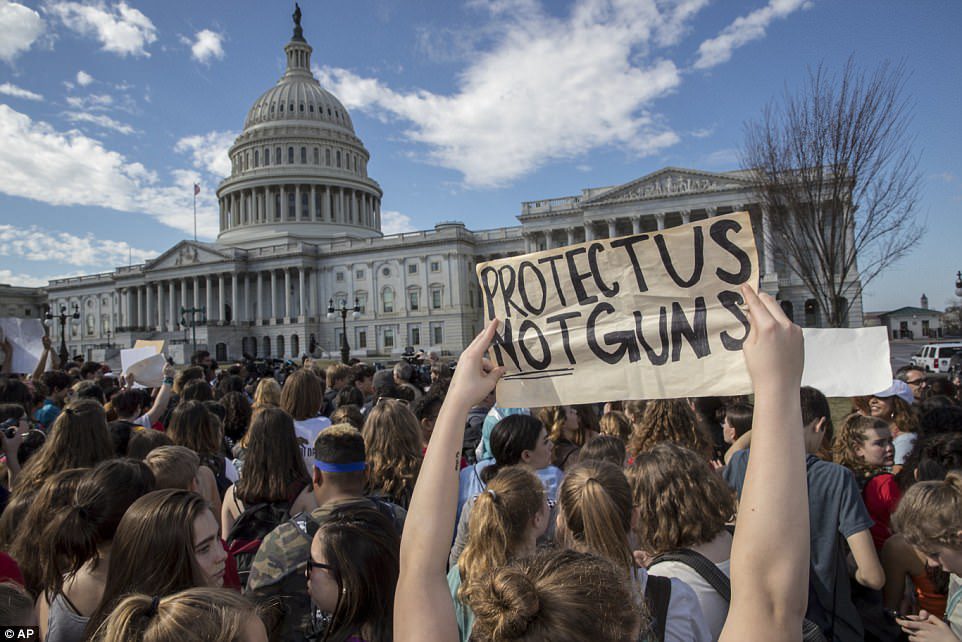 Students across the state staged the walkout exactly a week after gunman Nikolas Cruz stormed the hallways of Marjory Stoneman Douglas.

Hundreds of teens from Western High School in Davie carried large signs, each listing the name of a school where a shooting has taken place, along with the date of the shooting and the number of dead.

Students at schools across Broward and Miami-Dade counties in South Florida also participated in the walkout.

Other protesters from schools in Texas, Maryland, and Virginia also showed their support on Wednesday.

One school district in Houston, Texas threatened to suspend students who staged a walkout or caused disruption to protest gun laws.

Faced with the massive outpouring of grief and outrage over the Parkland shooting, Trump was to meet with parents, students, and teachers at the White House on Wednesday to discuss school safety. 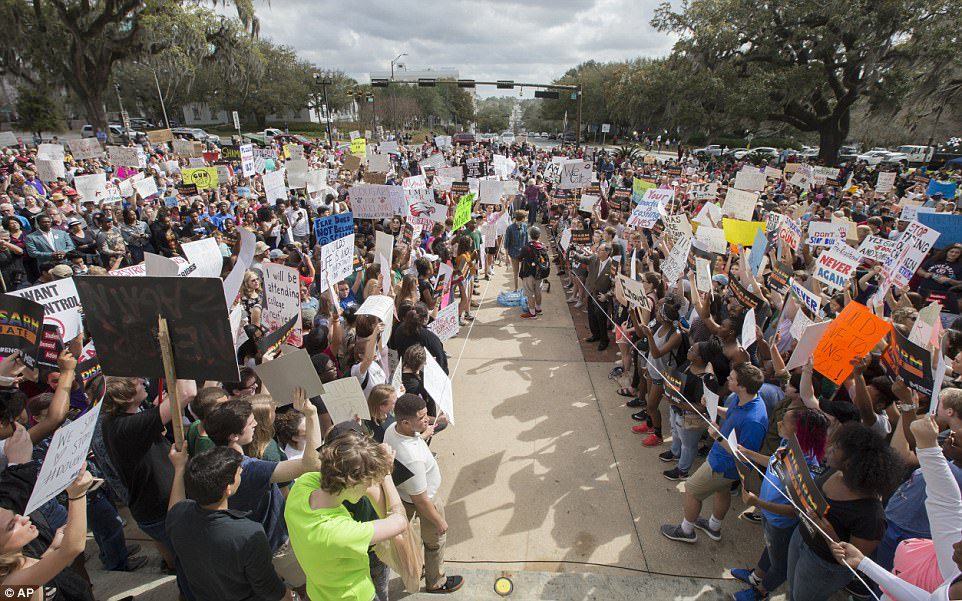 Tyra Hemans, a senior from Marjory Stoneman Douglas High, holds a photo of her friend Joaquin Oliver, who died during last week’s shooting as she and fellow students speak with the leadership of the Florida Senate Students and their chaperones from Marjory Stoneman Douglas High School, wearing blue t-shirts, stand in the gallery above the Florida Senate as the Senate holds a moment of silence to honour the victims of last week’s mass shooting Trump, who received strong backing from the NRA during his White House run, is also showing a new-found willingness to take at least some steps on gun control.

The president threw his support on Tuesday behind moves to ban ‘bump stocks’ – an accessory that can turn a semi-automatic weapon into an automatic one.

The Florida school shooter had a history of troubling behavior and a person close to him warned the FBI five weeks before the shooting that he was a threat, but no action was taken.

Cruz legally bought the gun he used in the attack – an AR-15-style semi-automatic rifle – and the White House said Tuesday it would consider raising the age for such purchases.

Students are also planning a march on Washington next month. 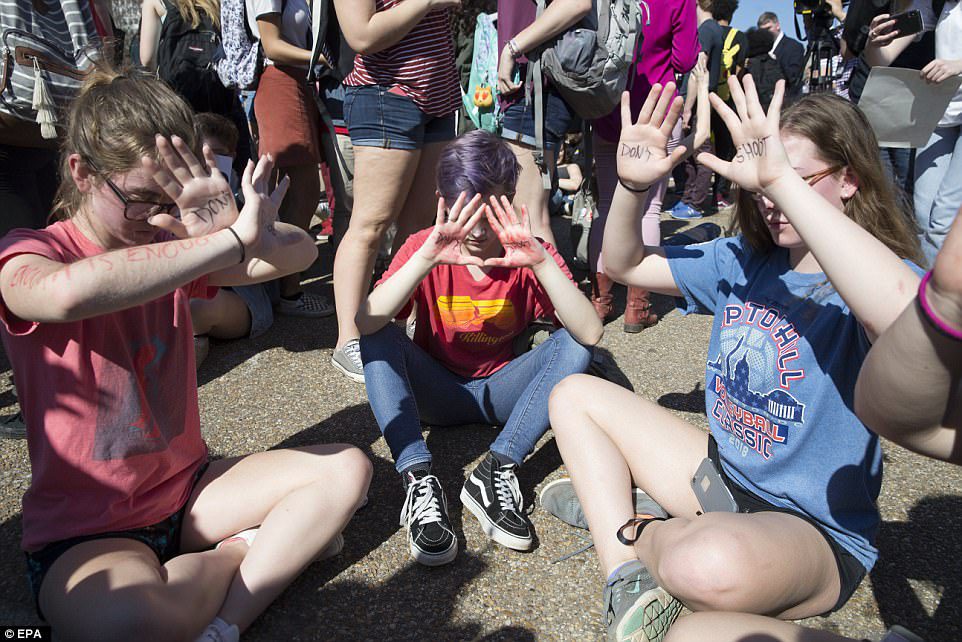