White farmers in South Africa have the most dangerous job in the country, are twice as likely to be murdered than police and are killed at four times the rate of the wider community, a rights group claims.

This week, as the government moves to seize all white-owned land without compensation, civil rights organization AfriForum claimed there had been 109 attacks which left 15 white farm workers dead so far this year.

This follows 82 killings and 423 attacks in 2016, though none of the figures can be verified because the South African government has refused to release farm murder statistics since 2007.

Some of the killings are reported to have been barbaric, with farm owners tortured, raped, burned alive and slaughtered in front of their families. 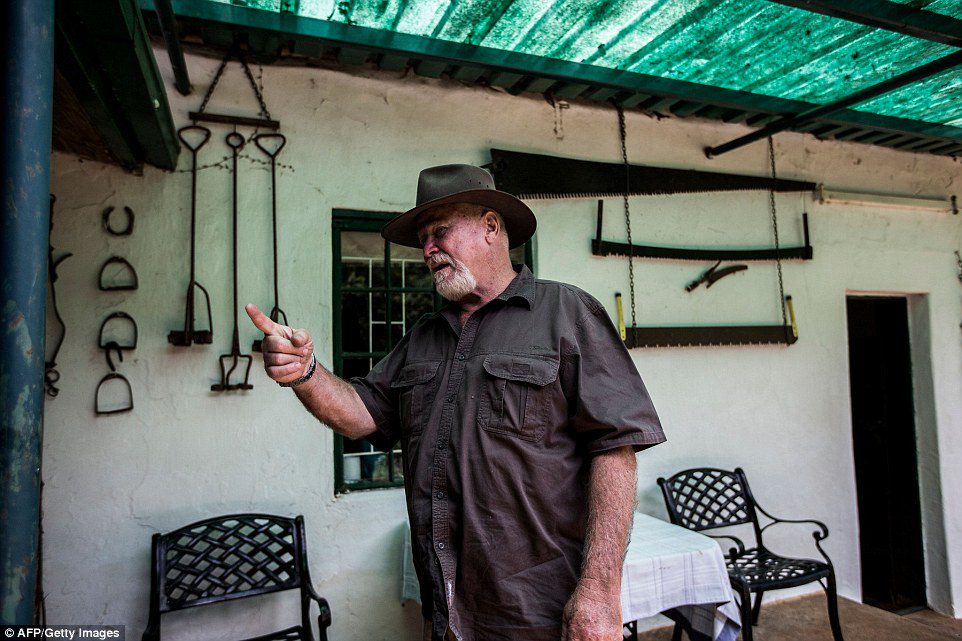 White farmers in South Africa have the most dangerous job in the country, according to civil rights group AfriForum. This man is seen standing on his porch as he describes how he was having breakfast when he was attacked on his farm 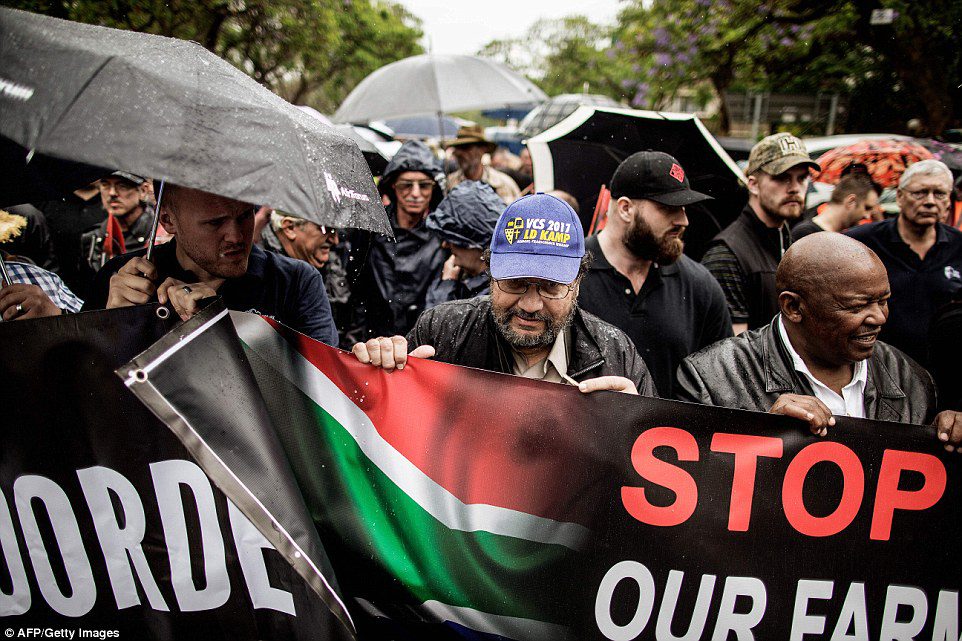 Farm attack victims are usually restrained with shoelaces, telephone wires or electric cables, according to a previous AfriForum report.

Some have had their nails pulled out, had boiling water poured over their bodies and been beaten to death with makeshift weapons.

‘Some of the murders have been accompanied by gratuitous violence and torture that can only be explained as racial hatred,’ Australian National University international law expert Associate Professor Jolyon Ford told SBS.

In January this year, 86-year-old Piet Els and his partner Rikkie Alsemgeest were the alleged victims of a brutal attack which saw four black men storm their farm, beat them with steel pipes and burn them with an iron. 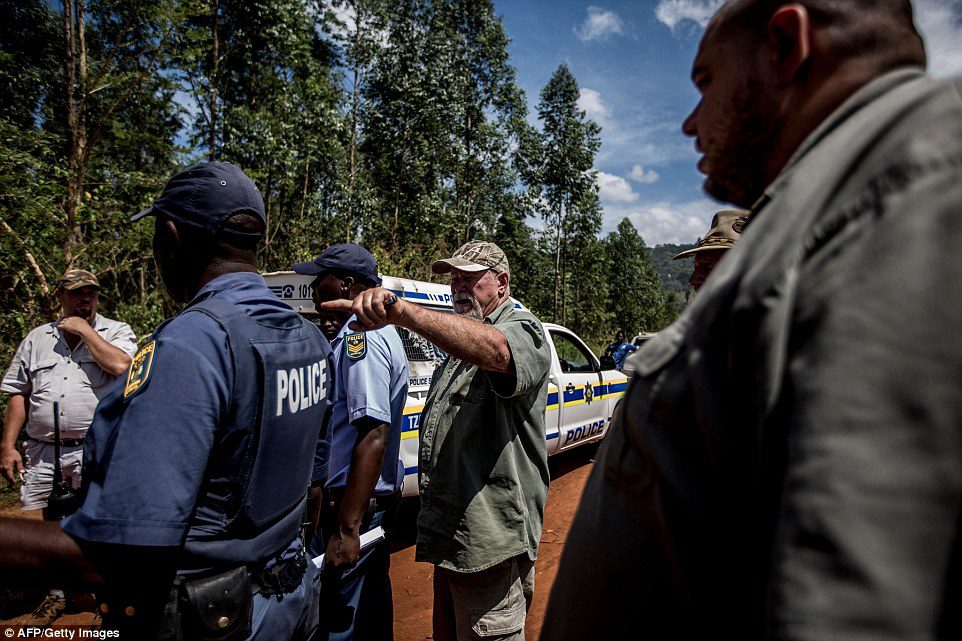 ‘They tied me to a chair and came with a steam iron they found in the kitchen and burned me,’ Ms. Alsemgeest told The Daily Telegraph.

‘Piet, they burned on his back in three or four places and burned on the back of his leg. They stripped off his skin… I thought Piet was dead because he was lying on the floor.

‘They put a cloth in my face and tied me to the chair. They stripped off my top. I was naked. They put some tape over my face and eyes. They took my breast and twisted, humiliating me, not saying a word.’

This week, a 40-year-old farm manager was tied up and hacked to death by a group of attackers, according to local reports. His wife was said to have been raped. 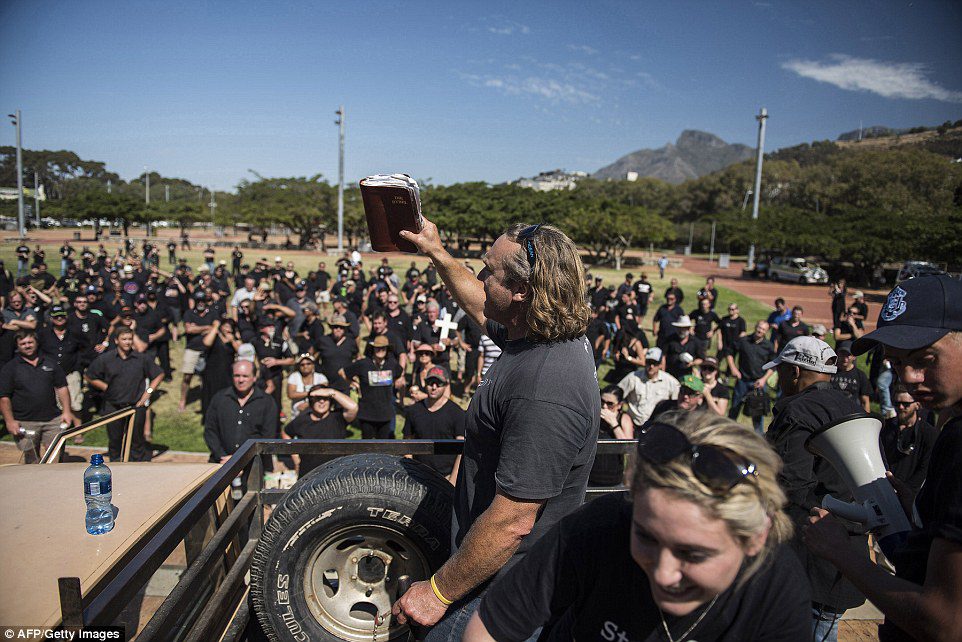 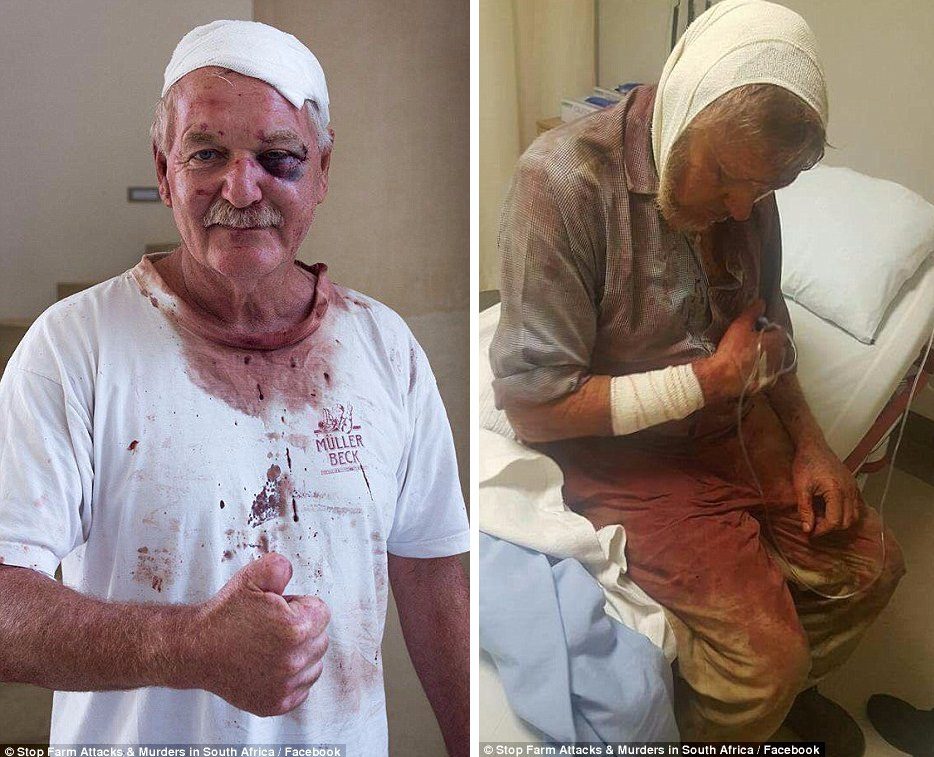 Earlier this month, a woman was alleged ‘repeatedly and violently’ sexually assaulted in front of her young son as five attackers stormed the family farm.

The group tied the family up in separate rooms and told the woman they would harm her husband if she didn’t comply, according to AfriForum.

The brother of another South African farm owner who witnessed his murder spoke to Australian activist Avi Yemini on Friday.

‘I could see the fear in his eyes before he was shot. Then I tried to convince myself that my brother was one of the lucky ones… His fear was only for a few minutes,’ he said.

‘There are people that are being tortured for nine hours and through the night.’ 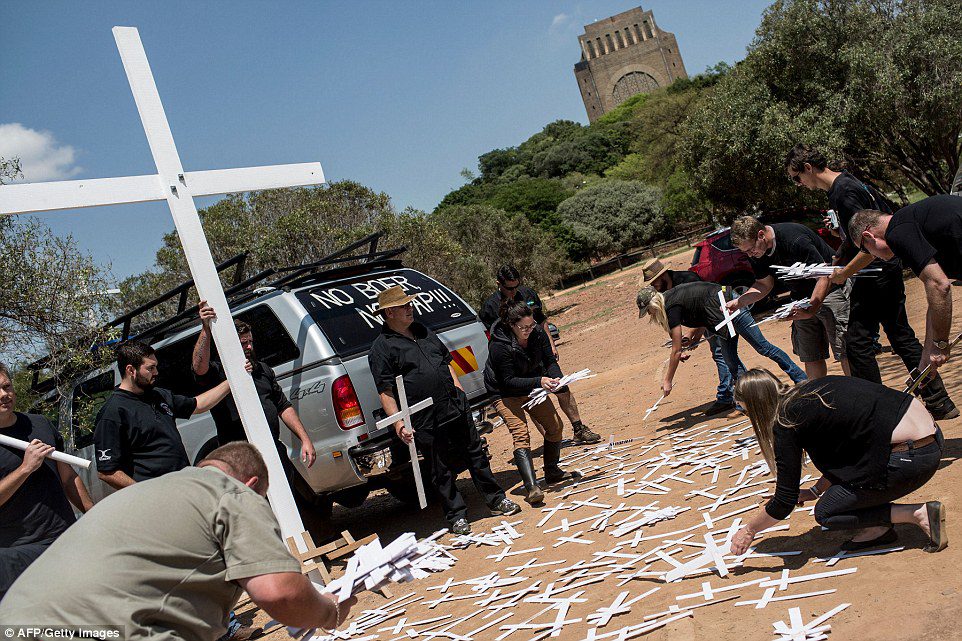 Members of the South African civic organisation, Afriforum and others carry crosses used for a demonstration against farm murders

The group said it is forced to compile its own statistics because the government stopped releasing its own figures more than 10 years ago.

‘Although the South African government denies that a violence crisis is staring rural areas in the face, the numbers prove that excessive violence plague these areas,’ Ian Cameron, AfriForum’s head of security, said.

‘The government cannot deny the facts – our people are being mowed down… Our rural areas are trapped in a crime war.’ AfriForum claimed there had been 109 attacks which left 15 white farm workers dead so far this year. A South African security company worker is seen taking his dogs out for a training session 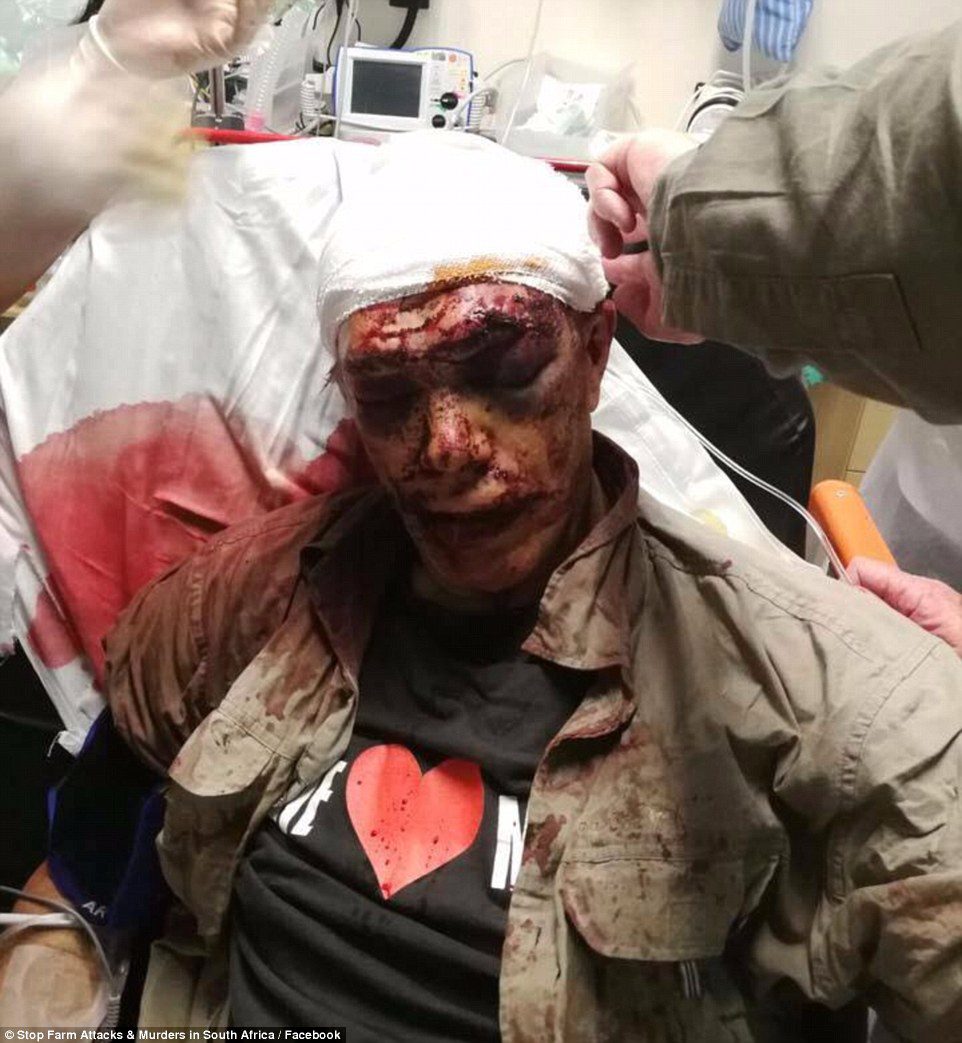 ‘We are concerned about hate speech, political leaders who… would say for example ”the white farmers should be blamed for everything”,’ he said.

The situation has worsened since the ruling African National Congress joined with the Economic Freedom Fighters party (EFF) earlier this month and announced a motion to confiscate white-owned land without compensation.

EFF leader Julius Malema, who was previously convicted of hate speech for singing the outlawed apartheid-era song ‘Shoot the Farmer,’ said two weeks ago: ‘We are starting with this whiteness. We are cutting the throat of whiteness.’ 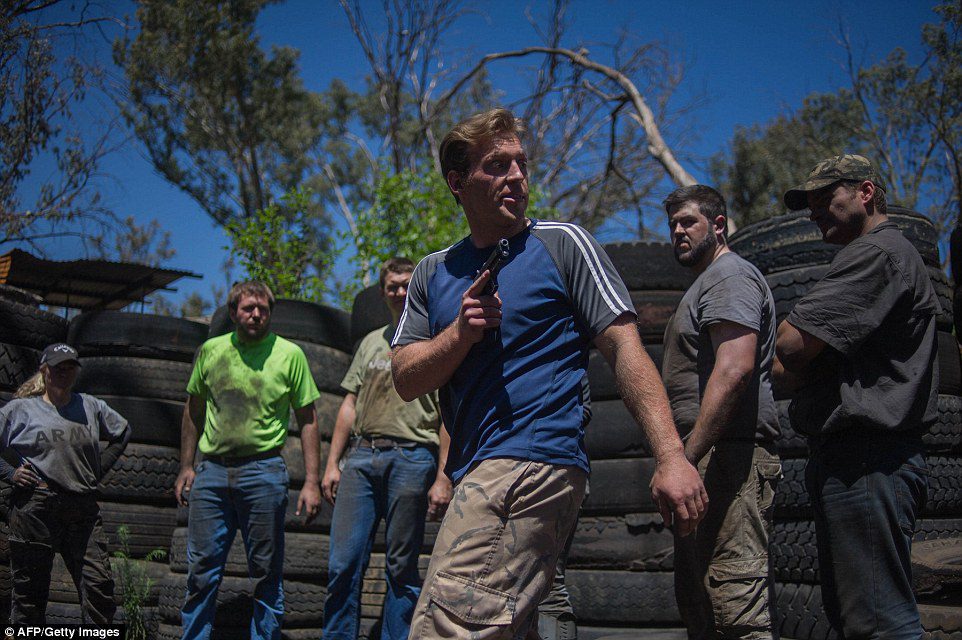 EFF leader Julius Malema said two weeks ago: ‘We are starting with this whiteness. We are cutting the throat of whiteness’

On Wednesday, he urged white South Africans to ‘go and live in a racist country like Australia’ in front of a cheering crowd during a Human Rights Day rally in Mpumalanga.

‘A racist country like Australia says, ”EFF wants to kill white farmers – they must come to Australia”. If they want to go, they must go. They must leave the keys of the tractors because we want to work the land.

‘They must leave the keys of the houses because we want to live in those houses. They must leave everything that they did not come with to South Africa.’

He went on to say anyone who immigrated to South Africa from Australia must ‘leave quietly’ and added: ‘Don’t make a noise because you will irritate us.’ 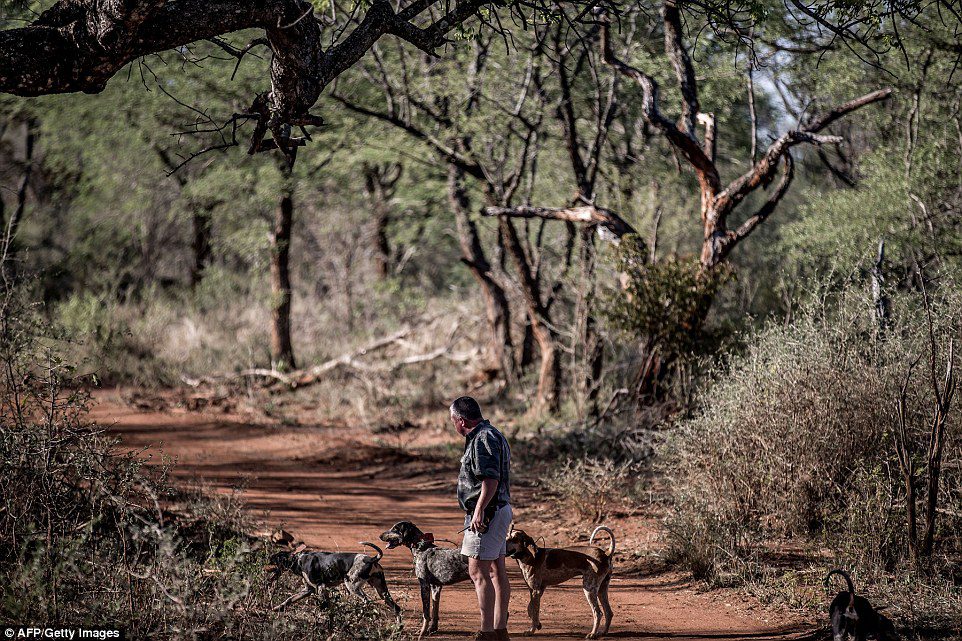 White South Africans own over 70 per cent of the country’s farm land, according to a 2017 government audit 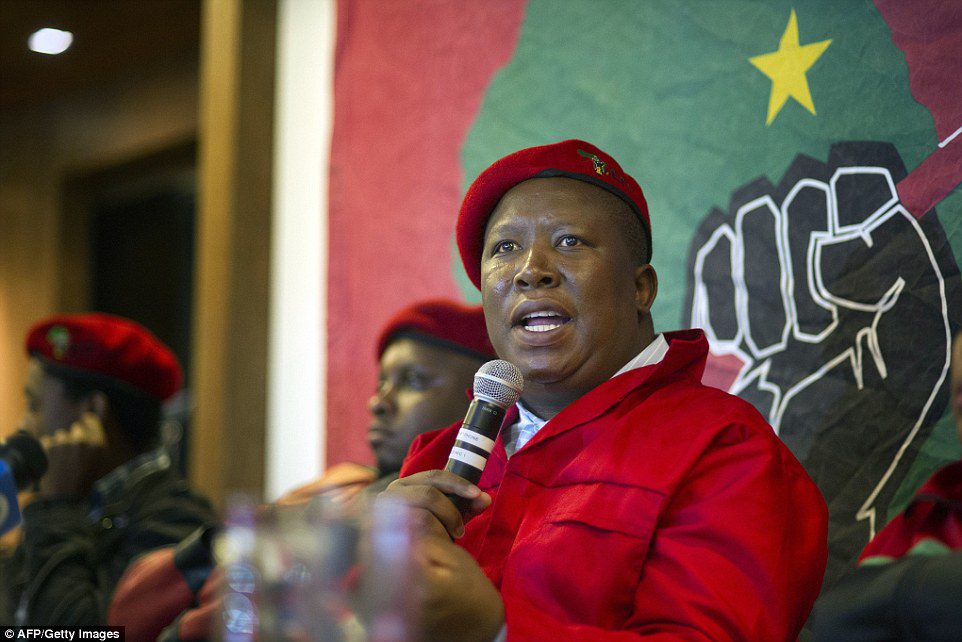 On Wednesday, Malema urged xenophobes to ‘go and live in a racist country like Australia’ in front of a cheering crowd during a Human Rights Day rally in Mpumalanga

‘If you look at the footage and read the stories, you hear the accounts, it’s a horrific circumstance they face,’ Mr. Dutton told the Daily Telegraph.

‘We have the potential to help some of these people that are being persecuted.’

Mr. Dutton directed his department to explore whether the farmers can be accepted into Australia through refugee, humanitarian or other visas, including the in-country persecution visa category.

‘I do think on the information that I’ve seen, people do need help, and they need help from a civilized country like ours,’ Mr. Dutton said. ‘The difference is that they are white and that the other communities who are suffering – and we’re talking about an ethnic cleansing in Myanmar right now – that they’re not white,’ Senator Di Natale told Sky News.

Mr. Dutton insists he is blind to skin color and will continue to bring in migrants based on the national interest.

‘It concerns me that people are being persecuted at the moment – that’s the reality – the numbers of people dying or being savagely attacked in South Africa is a reality,’ he said. Palm tree farmer and farm estate agent, Uwe Kroh, 62, who is part of the community security watch, sits at his home last year