The 13 siblings rescued from the California house of horrors will not live together again, despite pleading with the authorities to stay as a family.

The six Turpin children among the 13 found shackled at their home in Perris have been told that they will be split up into two foster homes.

Meanwhile, the seven adults, who have developmental issues, will be sent to an assisted living facility, CBS News reported.

David Turpin, 57, and his wife Louise, 49, are accused of starving, torturing and chaining their children and face lengthy jail time if found guilty. 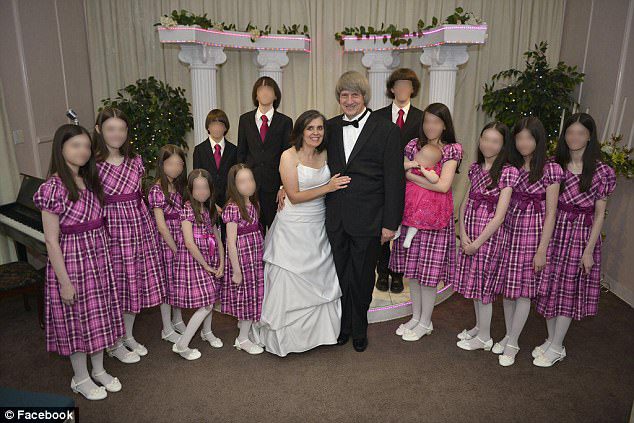 All the children, pictured here with their parents, had been subjected to ‘prolonged abuse’, were not allowed to shower more than once a year, and barred from seeing a dentist or doctor

A source close to the investigation told CBS that the seven adults will be cared for at a special care center.

The younger children, aged between two and 17 years old, asked to be home together but are set to be split into two groups.

The revelation comes after it emerged that the Turpins were planning a move to Oklahoma within days of their 17-year-old daughter escaping to call the police.

The family patriarch, David Turpin, 57, had been approved for a job transfer to Oklahoma with the defense contractor Northrop Grumann.

The family was planning to up and move ‘within days’ of January 14, the day their 17-year-old daughter climbed out the family’s Perris home’s window and used a deactivated cell phone to dial 911, according to sources who spoke with ABC News.

‘There were boxes in the house consistent with moving – concentrated in hallways, entryway, and bedrooms,’ one of the sources said. 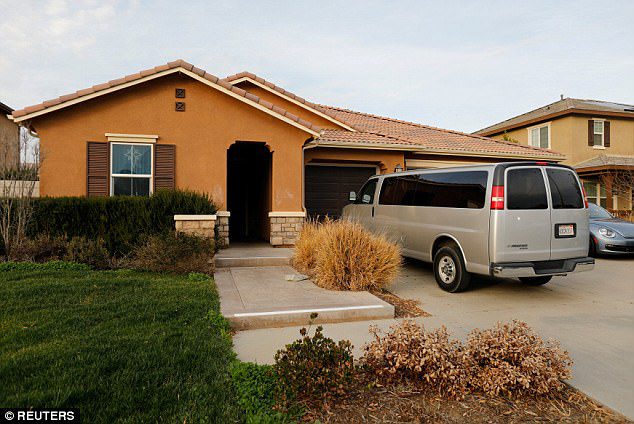 The parents of 13 children rescued from a California house of horrors (pictured), were readying for a move to Oklahoma within days of their 17-year-old daughter escaping to call police 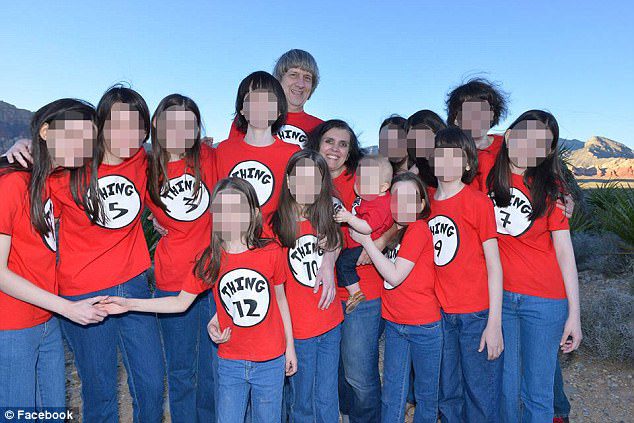 All 13 children, pictured here in ‘thing’ t-shirts, are being treated for malnutrition, it is unclear if the 17-year-old’s escape to alert authorities had anything to do with the impending move

The parents are accused of starving, torturing and chaining their 13 children to their beds for years.

The police responded quickly and ended up arresting the parents and taking the 13 children into state custody. It was unclear if the impending move had anything to do with the 17-year-old’s escape and a subsequent call to authorities.

The family had moved several times over the years. They moved twice in Texas, and once in California.

Meanwhile, new CCTV footage was released Tuesday showing the children being rescued from the home by police.

In the dramatic surveillance footage, the children are seen being escorted from the house by officers after the arrest of their parents David and wife Louise Turpin, 49.

The video shows police at the scene after the 17-year-old escaped through a window, enacting a plan she had in the works for two years.

Officers escort the youngsters from the home, one of whom is carrying her sibling and another runs to catch up. 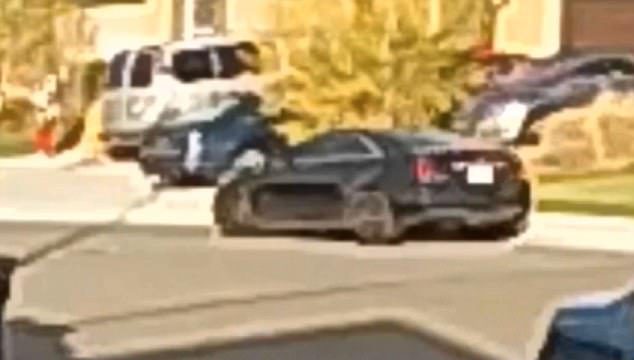 Dramatic rescue: The video shows police arriving to save the youngsters who can be seen running from the home in which they had been kept chained to their beds and tortured by their parents for years In the grainy footage, one older child can be seen carrying a sibling (pictured in the red circle). Seconds later another child runs behind them appearing to be desperate to catch up. The children are escorted into a police vehicle outside the home Wider view: The full frame of the footage taken from a neighbor’s security camera shows the children being escorted from the home, top left

Police look on as the children aged from two to 29 flee, and an officer standing on the driveway is seen ushering them to safety in the video.

Details of their harrowing plight have started to emerge since the California couple pleaded not guilty on Thursday to nearly 40 counts including torture, false imprisonment, abuse on a dependent, and child abuse. David faces an additional charge of a lewd act on a child under 14.

They denied the charges despite evidence showing how they kept their 13 children in locked in their rooms, chained to beds and allowing them to shower no more than once a year.

The Turpins also starved their children, their 29-year-old daughter weighed just 82lbs and taunted them with slices of pie.

Among the most shocking claims of abuse are: 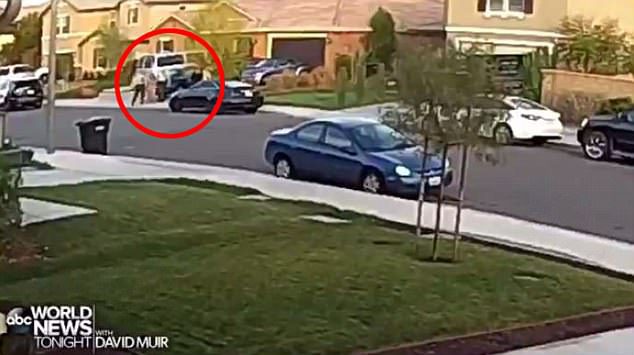 Under arrest: A clip from the same CCTV video released earlier shows parents David and Louise Turpin in custody and being led from their home

The couple arrived in court dressed in black with their hands and legs shackled this past Thursday and were represented by a public defender before bail was set at $12m for each of them.

‘If convicted of all charges, they face 94 years up to life in prison,’ District Attorney Mike Hestrin told reporters after the hearing.

Sheriff’s deputies in Perris, a town southeast of Los Angeles, found three of the captives had been shackled with chains and padlocks in their filthy, foul-smelling home Sunday after receiving an emergency assistance call from their teenage sister who had managed to escape.

Hestrin said the 17-year-old had been working on a plan to escape for more than two years and took one of her siblings with her, who became frightened and turned back. 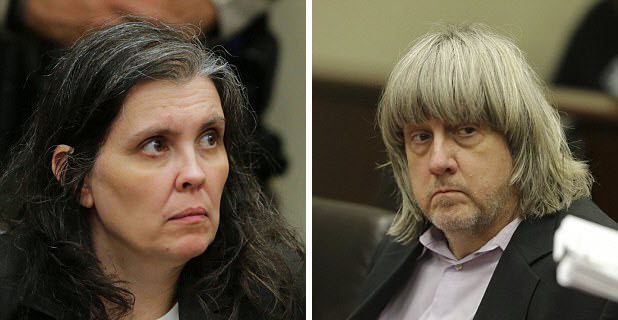 David Allen Turpin and Louise Turpin are pictured in court last week. Both pleaded not guilty to the multiple counts of torture

The teenager was so emaciated that officers first thought she was a young child.

Officers also initially assumed all the other siblings to be children but were shocked to discover seven ranging in age from 18 to 29.

All 13 are being treated for malnutrition and undergoing other diagnostic tests.

Hestrin said all the children had been subjected to ‘prolonged abuse’, were not allowed to shower more than once a year, and barred from seeing a dentist or doctor.

‘Circumstantial evidence in the house suggests that the victims were often not released from their chains to go to the bathroom,’ he told the press conference.

‘If the children were found to wash their hands above the wrist area, they were accused of playing in the water and they would be chained up,’ Hestrin said.

When they were not chained up, they were locked in different rooms and were not allowed to have toys, although there were many toys found in the house that was in their original package and had never been opened.

While the children’s ordeal began when the family was living in the Fort Worth region of Texas, it ‘intensified over time and worsened’ when they moved to California.

‘They were fed very little, on a schedule,’ Hestrin added.

Mark Uffer, the chief executive officer at the Corona regional medical center where the adults were being treated, has described their condition as stable. 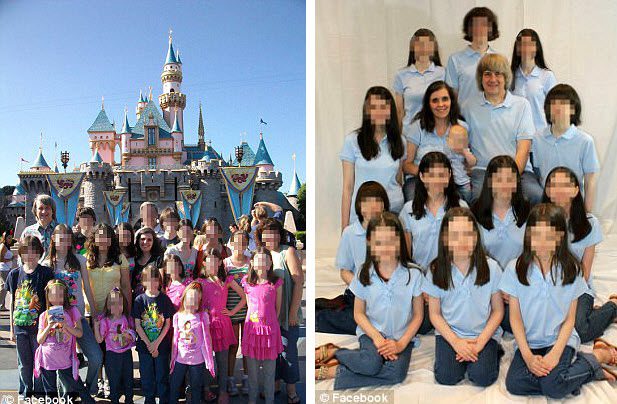 The Turpin family on a day out at Disney World left, and posing all in light blue polo shirts in the picture on the right. The children’s faces have been pixelated to conceal their identity 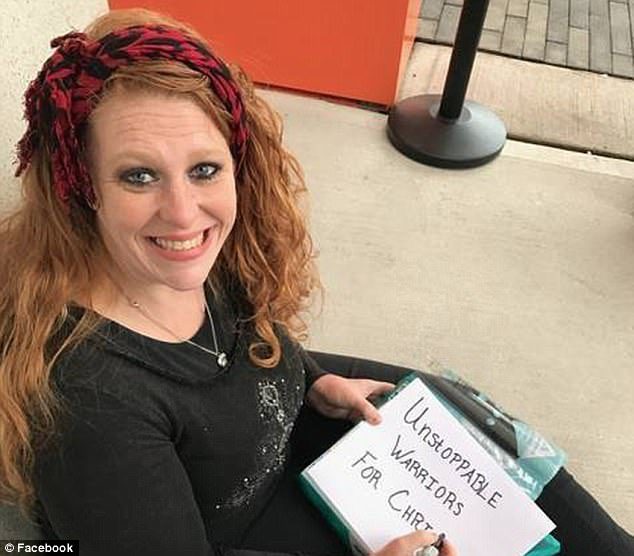 A sister of Louise Turpin, Elizabeth Flores (pictured), stayed with the family while she was at university. She recalled David Turpin watching her in the shower but said she didn’t witness any abuse 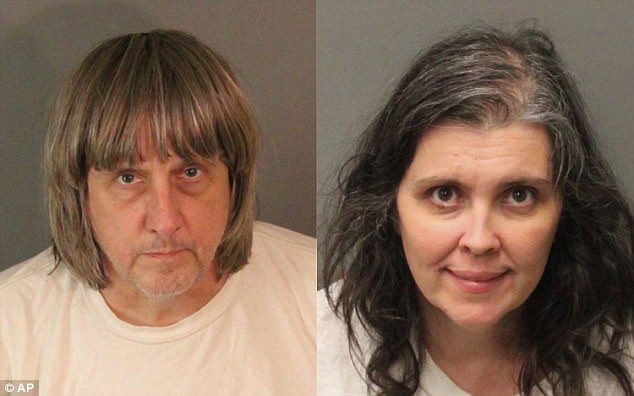 Neither parent was able to immediately explain why their children were restrained, according to the Riverside County Sheriff’s Department.

There was no indication that either suffered from mental illness, Perris police chief Greg Fellows said, or that the children’s ordeal was linked to the family’s religious beliefs.

Initial investigations have confirmed that the couple was the biological parents of all 13 siblings.

According to police, the family moved in 2014 from Texas to a middle-class neighborhood of Perris, some 70 miles (110 kilometers) southeast of Los Angeles, homeschooling their children in their Spanish-style stucco house.

A sister of Louise Turpin, Elizabeth Flores, told ABC the couple kept to themselves.

‘This has been going on before they even had children… they were real private, and they didn’t come around much,’ said Flores.

As a university student Flores lived with the Turpins for a while.

‘I thought they were really strict, but I didn’t see any abuse,’ Flores said.

But she said she did have disturbing memories of the husband.

‘If I went to get in the shower, he would come in while I was in there and watch me.

‘It was like a joke. He never touched me or anything.’

Attorney Hestrin described how the abuse allegedly intensified over the last eight years, explaining how the Turpins went from tying the children up with ropes to using padlocks and chains to keep them in one place.

‘The victims report that as a punishment, starting many years ago, they began to be tied up first with ropes, one victim at one point was tied up and hogtied and then when that victim was able to escape the ropes, the defendants began using chains and padlocks to chain the victims to their beds,’ he said.

They were beaten and strangled for reason as trivial as washing their hands ‘above the wrist’, he alleged.

‘One of the reasons for these punishments of being chained up were that, and by the way, the punishments included frequent beatings and even strangulation.

They were all fed on a particular schedule and, as a punishment, were made to look at foods their parents left out purposefully to torment them, it was claimed.

‘The parents would apparently buy food for themselves and not allow the children to eat it. ‘

‘Apple pies, pumpkin pies, and leave it on the counter to let the children look at it but not eat it,’ he said

Some of the children did not know what a police officer was when they were rescued and many are mentally impaired as a result of what prosecutors called ‘severe, prolonged and pervasive abuse’.

According to Hestrin, the abuse began in 2010 and has intensified ever since.

One of the children, a boy, was allowed out of the home to attend college classes but Louise accompanied him.

The levels of abuse varied from child to child, with David Turpin accused of sexually abusing a 14-year-old daughter.

Only the two-year-old survived malnutrition, but one 22-year-old only weighed 82lbs.

The children were made to stay awake through the night and sleep during the day as part of their torment, often going to bed between 4am and 5am.

The case recalls previous kidnapping horrors that have made global headlines in recent years.

Ariel Castro abducted three young women he repeatedly raped for a decade at his Cleveland home. He was arrested in May 2013 after one of his victims escaped.

Jaycee Dugard was kidnapped as an 11-year-old and repeatedly raped over 18 years by convicted sex offender Phillip Garrido in California. She was rescued in August 2009.

Austria has seen two high profile kidnaps – Elisabeth Fritzl was imprisoned and raped over a period of 24 years by her father Josef while Natascha Kampusch was held for eight years by Wolfgang Priklopil before her 2006 escape.