Home
In The News
Facebook Users Could Get Up To $5,000 Compensation For EVERY Picture

Facebook will face a class action lawsuit in the wake of its privacy scandal, a US federal judge has ruled.

Allegations of privacy violations emerged when it was revealed the app used a photo-scanning tool on users’ images without their explicit consent.

The facial recognition tool, launched in 2010, suggests names for people it identifies in photos uploaded by users.

The technology was suspended for users in Europe in 2012 over privacy fears but is still live in the US and other regions worldwide. 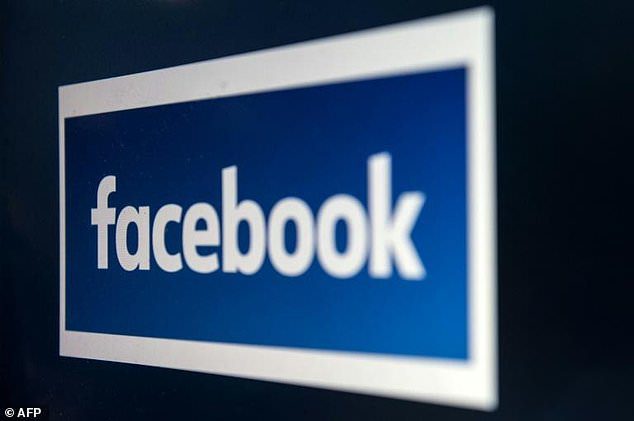 Facebook’s facial recognition tool, launched in 2010, suggests names for people it identifies in photos uploaded by users. A judge has ruled this broke Illinois state law and people could be entitled to up to $5,000 (£3,500) in compensation for every image used

It is believed that the function runs afoul of Illinois state law on protecting biometric privacy.

Judge James Donato ruled the claims by Illinois residents Nimesh Patel, Adam Pezen, and Carlo Licata was ‘sufficiently cohesive to allow for a fair and efficient resolution on a class basis.

‘Consequently, the case will proceed with a class consisting of Facebook users located in Illinois for whom Facebook created and stored a face template after June 7, 2011,’ he said, according to the ruling.

June 2011 was the date on which Facebook rolled out its ‘tag suggestions’ feature.

The feature is not available to users in most countries, including the UK – and can be turned off in settings for US users.

Facebook believes that the lawsuit should be pursued by an individual as the total amount of damages could ‘amount to billions of dollars,’ U.S. District Judge James Donato wrote in the ruling.

The judge has ruled that the Illinois law is clear: Facebook has collected a ‘wealth of data on its users, including self-reported residency and IP addresses,’ reports Bloomberg.

Facebook has acknowledged that it can identify which users who live in Illinois have face templates, he wrote.

A face template can be generated from ten or more photos and is used to generate a profile on Facebook’s database. 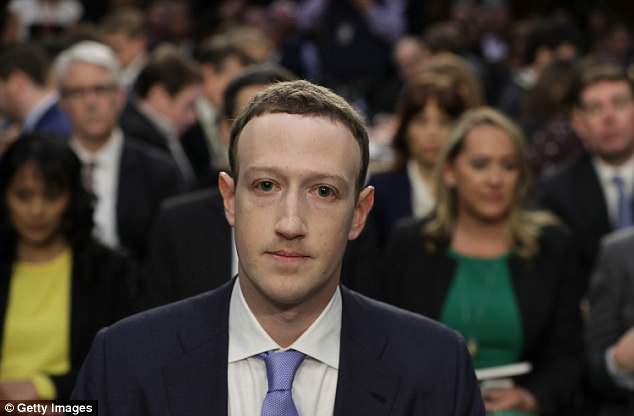 Facebook believes that the lawsuit should be pursued by an individual as the total amount of damages could ‘amount to billions of dollars,’ U.S. District Judge James Donato wrote in the ruling

A Facebook spokeswoman said the company was reviewing the decision, adding: ‘We continue to believe the case has no merit and will defend ourselves vigorously.’

Facebook also contends it has been very open about the tool since its inception.

The Mark Zuckerberg-owned app allows users to turn the feature off and prevent themselves from being suggested in photo tags.

Also on Monday, Facebook confirmed that it collected information from people beyond their social media use.

‘When you visit a site or app that uses our services, we receive information even if you’re logged out or don’t have a Facebook account,’ product management director David Baser said in a post on the social network’s blog.

But he stressed the practice was widespread, with companies such as Google and Twitter also doing the same.

The company has used a program it calls DeepFace to match other photos of a person.

The ruling comes as the social network is snared in a scandal over the mishandling of 87 million users’ data ahead of the 2016 US presidential election.beyond their social network use.

Messenger communications may be among the data harvested by Cambridge Analytica, a disclosure buried in a new ‘Protecting Your Information’ (pictured) tool on the social network has revealed

It is believed that the data taken from people via the app was used to assist in the propaganda and electing of Donald Trump to the president of the US.

Mark Zuckerberg, founder, and CEO of Facebook admitted that his own information was taken in the scandal.

The admission came in front of US Congress as he was quizzed about his role in the pilfering of information from his social media site.

Recently, the social media conglomerate has implemented a variety of updated privacy controls and settings.

Last week, Facebook launched a new tool that lets you check whether your data was harvested by Cambridge Analytica. 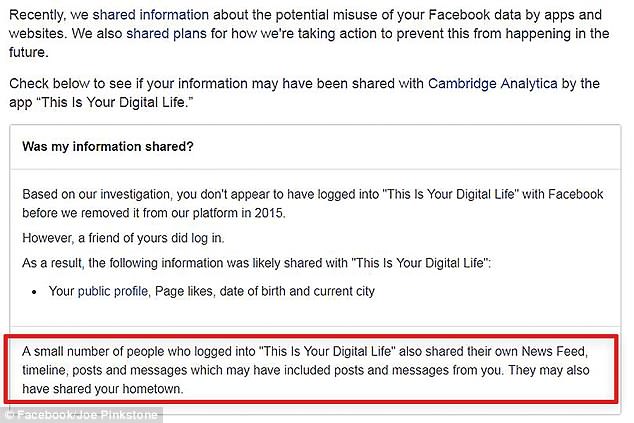 Facebook slipped the previously unknown information into the fine print (highlighted in red) of the app created to address concerns over the scandal. MailOnline reporter Joe Pinkstone is among those to have had personal information shared with Cambridge Analytica

As a result, Facebook’s 2.2 billion users began to receive a notification on their newsfeed.

Titled ‘Protecting Your Information,’ it contains a link to let you see what apps you use and what information you have shared with them.

A separate tool lets you manually check whether you or your friends logged into the ‘This Is Your Digital Life’ quiz responsible for the data grab.

As well as the information provided on a person’s Facebook profile, there were concerns that personal messages were also jeopardized.

Cambridge Analytica has denied the claims that it accessed private message data.