An elderly woman in China has to walk 24 kilometers (15 miles) a day in order to take his disabled grandson to school.

Shi Yuying, 76, makes four return trips a day pushing Jiang Haowen, nine, to school and back in the rural Guangxi Province in southern China, according to Huanqiu.com, an affiliation of People’s Daily.

The strong-willed grandmother, who is the boy’s sole carer, said to a local reporter: ‘As long as I have strength, I will carry on [pushing him].’ 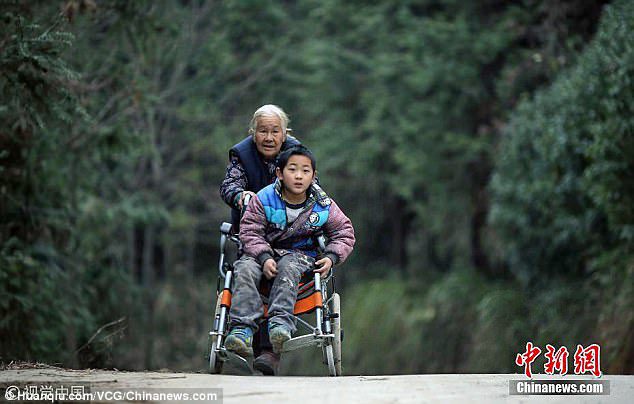 Dedication: Shi Yuying (pictured) has pushed her grandson Jiang Haowen to school for four years. In order to do so, the 76-year-old has to walk a total of 15 miles a day in rural China 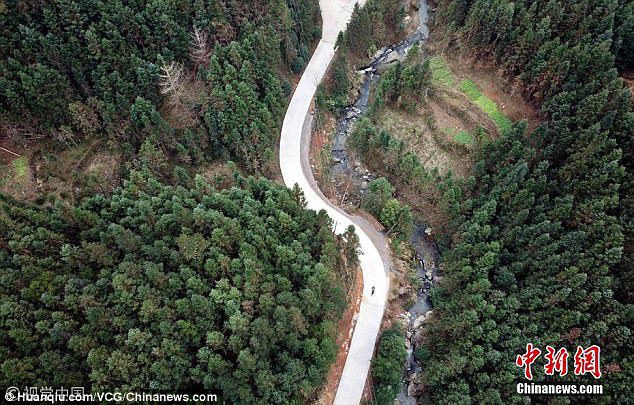 The long and winding road: Ms. Shi walks along the mountain path to take Haowen to school and back eight times a day. Haowen has cerebral palsy and cannot move his body freely

Haowen suffers from cerebral palsy, a brain condition that affects movement and coordination. He cannot walk on his own and needs full-time care.

Haowen’s parents divorced when he was four years old.

His father is now working in another city so he could support the family, and his mother has remarried, according to the Huanqiu report quoting Netease.

The determined pensioner first used a bike to push Haowen.

Last July the local authority provided the family with a wheelchair as poverty relief.

Since then the elderly villager has been using the wheelchair for the school run.

The woman has been doing the school run for four years, come rain or shine.

Ms. Shi told Pear Video that Haowen diagnosed with cerebral palsy when he was about two years old. The boy’s parents took him to see the doctor because he hadn’t been able to walk.

Afterwards, Haowen took him to seek medical attention in nearby cities, such as Nanjing and Liuzhou, but the treatment didn’t bring much change.

What’s more? The family ran into huge debts due to medical bills.

Ms Shi told Pear that she has to take Haowen to school four times a day: once in the morning and once in the afternoon. She also needs to walk from home to his school to collect him twice: once at noon and once in the evening. 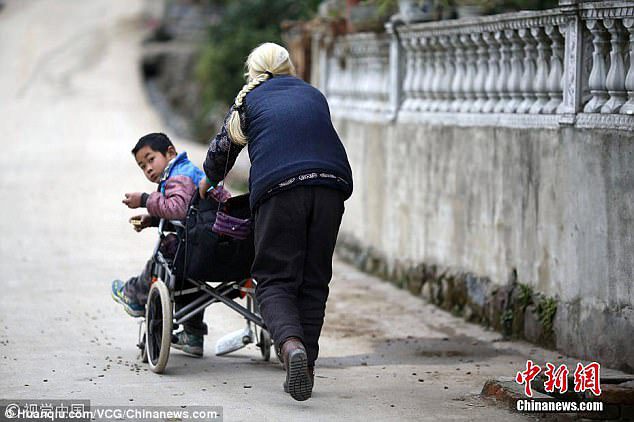 ‘As long as I have strength, I will carry on’: Ms Shi does the school run come rain or shine 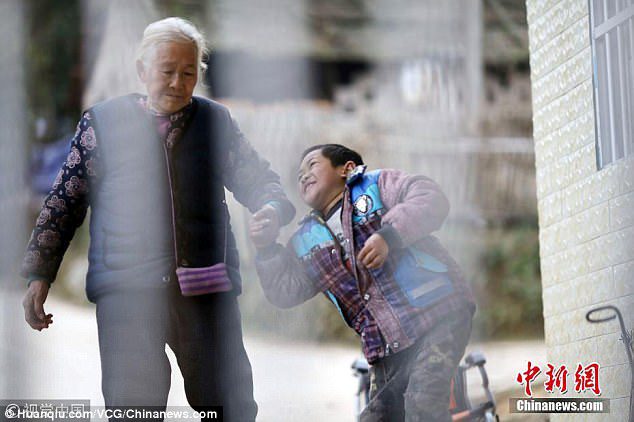 Haowen’s school is located about three kilometers (1.86 miles) from his home. This means Ms. Shi would have to walk a total of 24 kilometers a day.

However, Ms. Shi said she was happy to take on the task. She also said though Haowen couldn’t move freely, he is a smart child.

Ms. Shi said the boy is particularly good at maths and has excellent memories.

Apart from doing the school run, Ms. Shi also looks after all aspects of Haowen’s life.

She said she was looking for a good school for a disabled child, hoping she could send Haowen there one day.