A mother who battled aggressive cancer is back at the hospital where she beat the disease – working as a nurse in training.

Ashley Moore, 30, was so inspired by the staff treating her that she decided to ditch her career as a first-grade teacher and retrain as a medic.

She was diagnosed with non-Hodgkin’s lymphoma in November 2016, just six months after the birth of her son Hudson.

Doctors found fast-growing tumors – one of which was an 8cm by 11cm mass – wrapped around her aorta. They also detected cancer spots on her lungs.

The mother-of-two is now in remission after she underwent grueling chemotherapy to combat the disease at Medical City Plano in Texas.

Mrs. Moore, of Celina, Texas, says she was helped through the stressful time by an incredible team of doctors and nurses, who showed her ‘amazing compassion’ – and now she wants to support other patients going through a tough time. 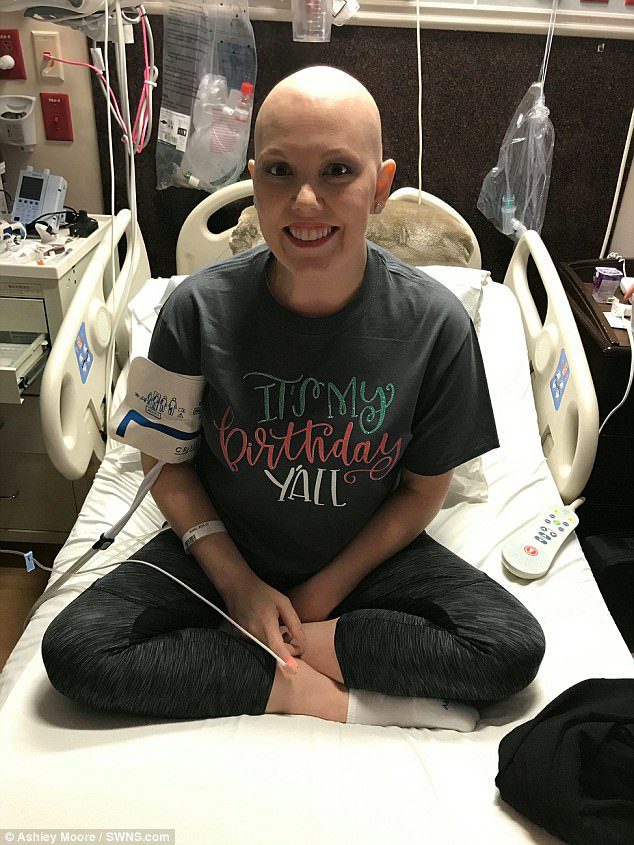 Ashley Moore, from Texas, gave up first-grade teacher job to retrain as a medic 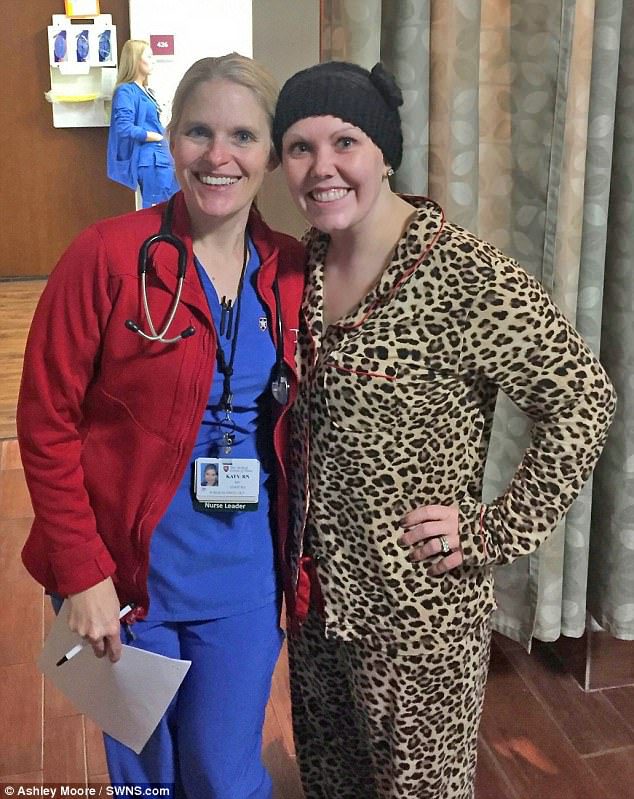 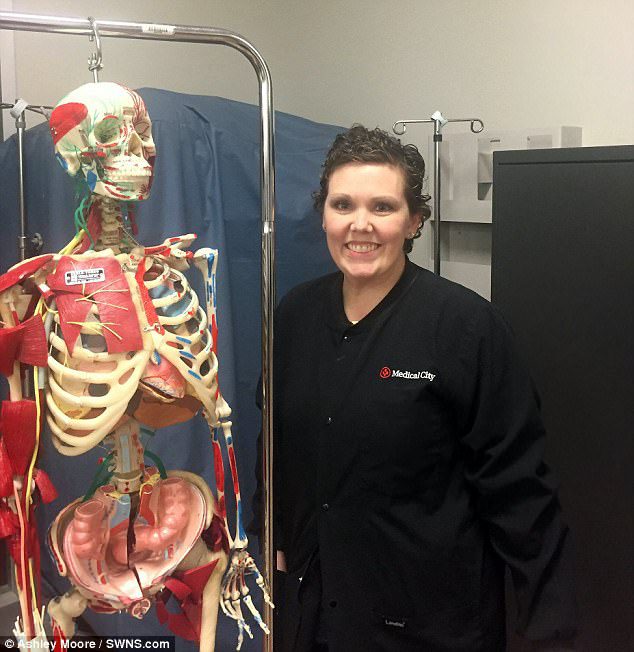 She said: ‘What was supposed to be the worst time of my life actually ended up being the best because I was so inspired by the support I received from the nurses.

‘It’s hard to put into words. I just fell in love with them all and I was so inspired by the dedication they have and by the amazing compassion and time they had for me, even when they weren’t on duty.

‘It was enlightening, and I just knew that God had put me through this experience for a reason.’ 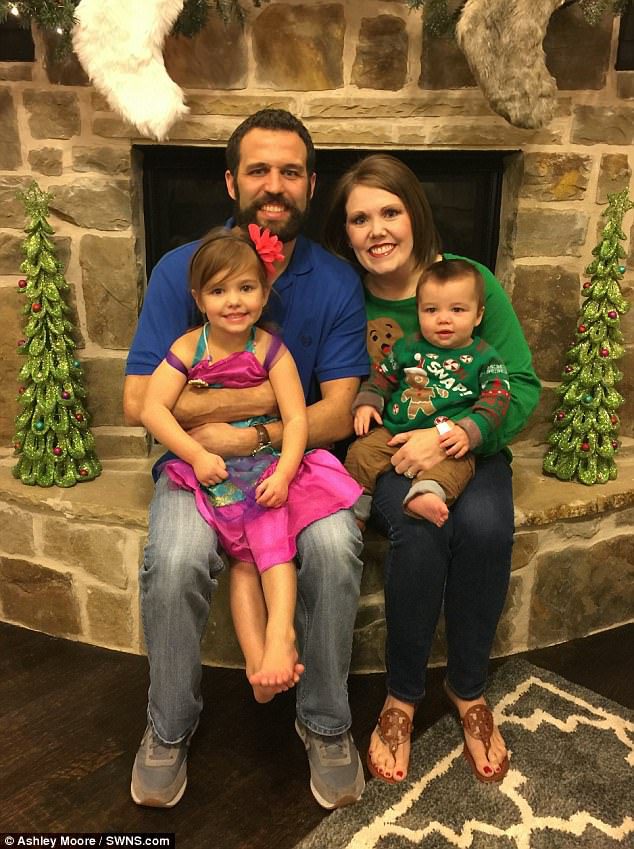 She is pictured before her illness with her husband Danny, 35 and their children Hudson, now 2, and Harper, 5 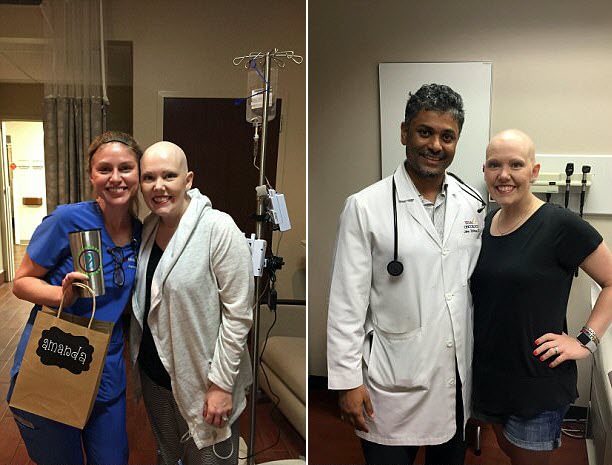 Mrs. Moore is in remission after having grueling chemotherapy to combat the disease

I knew that I could get through anything’

Mrs. Moore, who is a mother to Hudson, two, and Harper, five, is now studying nursing at Collins College and hopes to graduate in Summer 2019.

She has already taken up a part-time position in Medical City Plano, working as a unit clerk in the orthopedic trauma.

She said: ‘I’m working as a clerk but it would be my dream to work as a nurse here.

‘I went through the most intense experience of my life here and it would be a privilege to work with the nurses who have become such close friends. 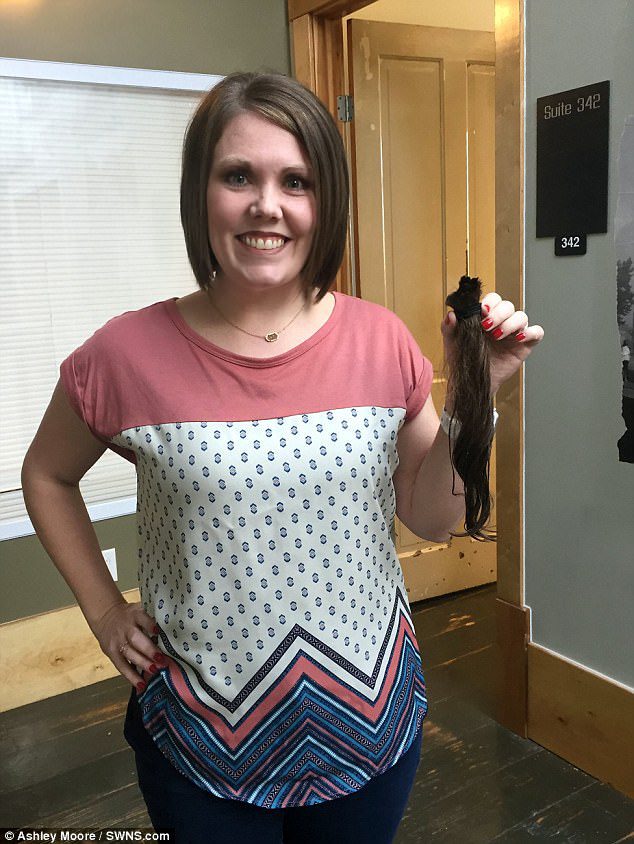 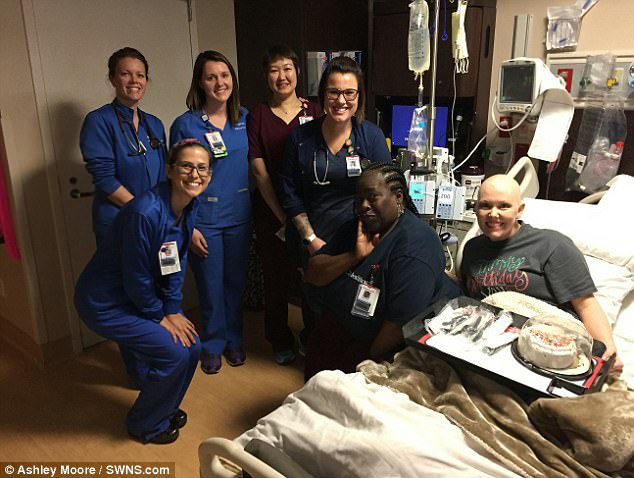 She said: ‘I’m in remission now and it’s all because of the work of my wonderful colleagues’

‘I have thought about going into oncology and I think it would be really helpful to my patients, to be able to see someone who has gone completely full circle and come out the other side.’

Although she said leaving her job at Scott Elementary School in Frisco has been a difficult financial decision for she and her husband Danny Moore, a 35-year-old accountant, Mrs. Moore said it was a path she had to follow.

‘I’m in remission now and it’s all because of the work of my wonderful colleagues and my amazing doctors,’ she said.

‘My son was only six-months-old when I was diagnosed with cancer and it was such a scary time.

‘But everyone in Plano made me feel at peace and upbeat and I knew that I could get through anything.’