Home
In The News
“SOS Cuba”: Thousands of Cubans Protest Against Their Government

Chanting “freedom” and calling for President Miguel Diaz-Canel to step down, tens of thousands of protestors marched across Havana and beyond voicing their frustration and exhaustion with the repressive communist government, tagging their posts with the hashtag SOS Cuba in a desperate call to garner urgent humanitarian intervention as well as international attention and solidarity. The protests erupted amid Cuba’s worst economic crisis since the fall of the Soviet Union, its old ally, and a record surge in coronavirus infections, with people voicing anger over shortages of basic goods, curbs on civil liberties, and the authorities’ handling of the pandemic. 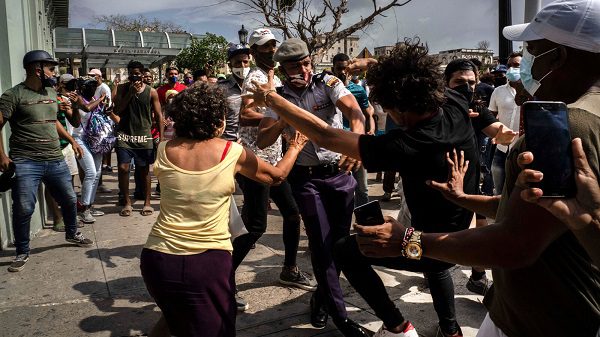 Thousands took to the streets in various parts of Havana including the historic center, their shouts of “Diaz-Canel step down” drowning out groups of government supporters waving the Cuban flag and chanting “Fidel.” Special forces jeeps, with machine guns mounted on the back, were seen throughout the capital and the police presence was heavy even long after most protesters had gone home by the 9 p.m. curfew in place due to the pandemic. 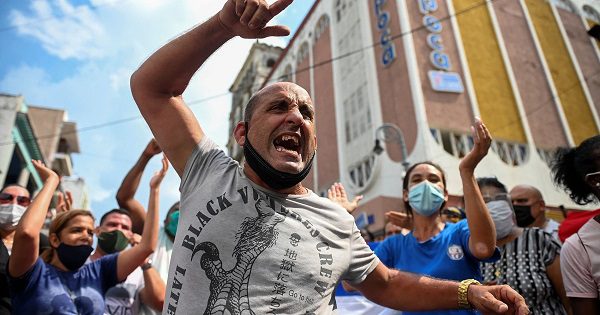 Cuba has been experiencing a worsening economic crisis for two years, which the government blames mainly on U.S. sanctions and the pandemic, while its detractors cite incompetence and a Soviet-style one-party system. Cuba has begun a mass vaccination campaign, with 1.7 million of its 11.2 million residents vaccinated to date, and twice that many have received at least one shot in the three-shot process. Still, the arrival of the Delta variant has prompted cases to surge, with health authorities reporting a record 6,923 cases and 47 deaths on Sunday – twice as many as the previous week. Hospitals in the worst affected province have been overwhelmed.

What does “SOS Cuba” mean?

Despite demonstrators’ best attempts to broadcast the protest live on cell phones, Cuban authorities shut down the island’s internet service midway. “We are fed up with the queues, the shortages. That’s why I’m here,” one middle-aged protester who declined to identify himself for fear of being arrested later told the Associated Press, per Politico.

Despite being charged by police officers and subjected to tear gas barrages, the protests grew across big cities and small towns in Cuba. But President Miguel Díaz-Canel blamed Cuban Americans for the uprising. “As if pandemic outbreaks had not existed all over the world, the Cuban-American mafia, paying very well on social networks to influencers and YouTubers, has created a whole campaign … and has called for demonstrations across the country,” he said to reporters. 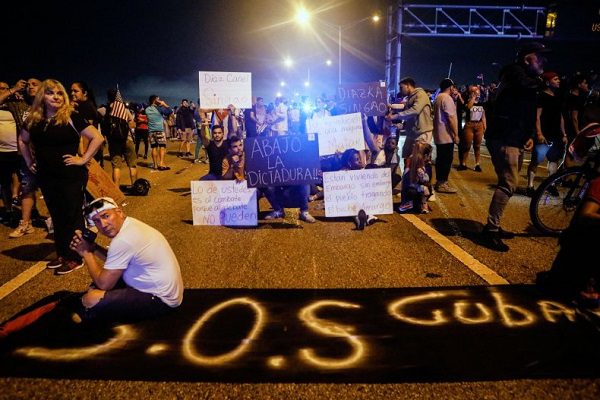 “Hey guys, there is a major crisis right now in Cuba and we need your help to spread awareness,” Havana singer Camila Cabello wrote on her Instagram page, where she posted a black square with a Cuban flag to her grid. “Deaths from COVID are rising rapidly and because of the lack of medicine, resources, basic necessities, and even food, many people are dying.”

Right now, there are simultaneous protests in more than five cities in Cuba. Our brave people took the streets to protest for this humanitarian crisis and the people of Cuba need our help urgently. Please spread this message by posting #SOSCuba to your feed to help bring awareness and support to my people.

Proud Cuban and Miami resident Gloria Estefan followed suit, hashtagging her Instagram post #SOSCuba along with the lyrics of her own song “Cuba libre.” “Quiero mi Cuba libre,” she wrote. “The Cuban people are reaching their breaking point! I stand with them as I always have!”