A new photo has been released showing the moment a San Francisco 49ers cheerleader took a knee during the national anthem.

Kayla Morris’s protest divided football fans across the country, many applauding the 24-year-old for expressing her views and others demanding she is fired for disrespecting the national anthem.

As the audience at the Levi’s Stadium stood up for the national anthem at Thursday’s game against the Oakland Raiders and the cheerleaders held out their pom-poms in unison, Morris broke the formation in the second row and took a knee.

She was protesting police brutality against African Americans. 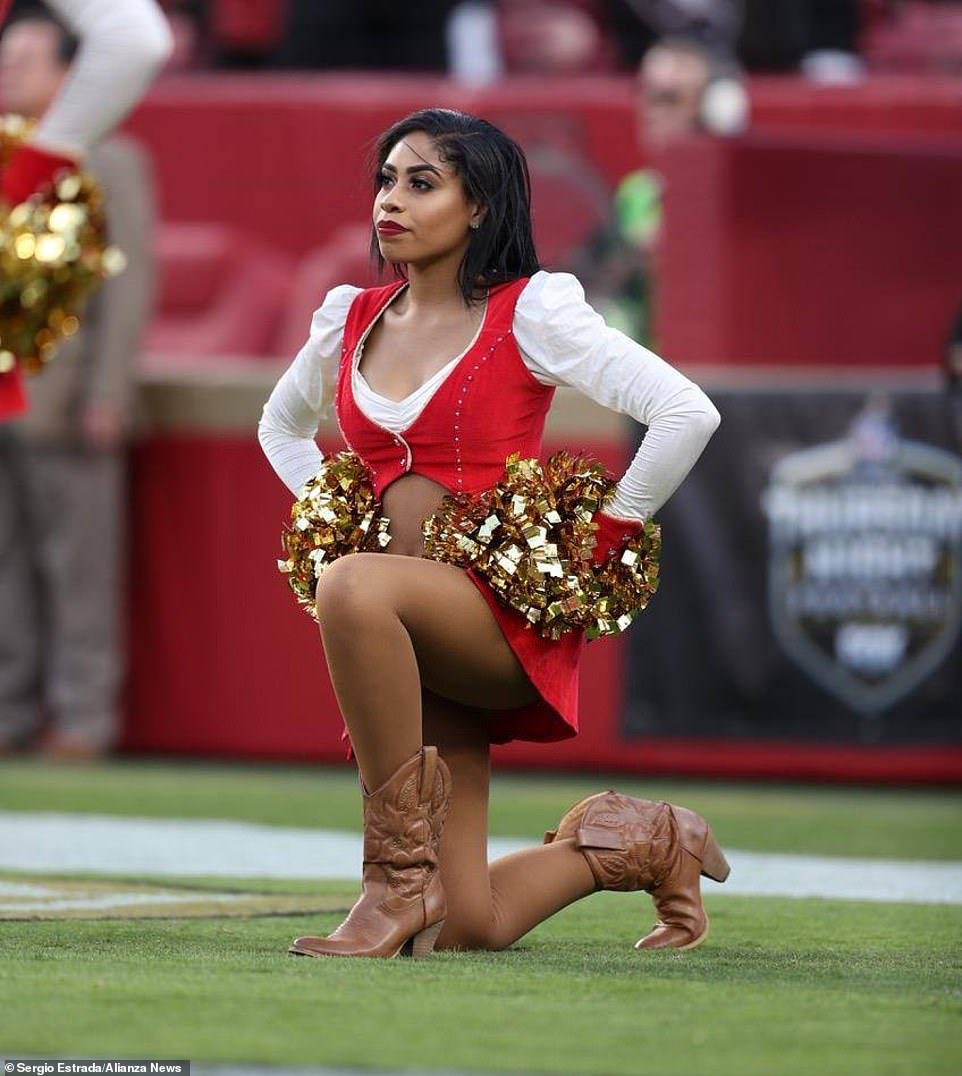 A new photo of San Francisco 49ers cheerleader Kayla Morris, 24, shows her confident and defiant face as she took a knee as the national anthem was played at Thursday’s home game against the Oakland Raiders 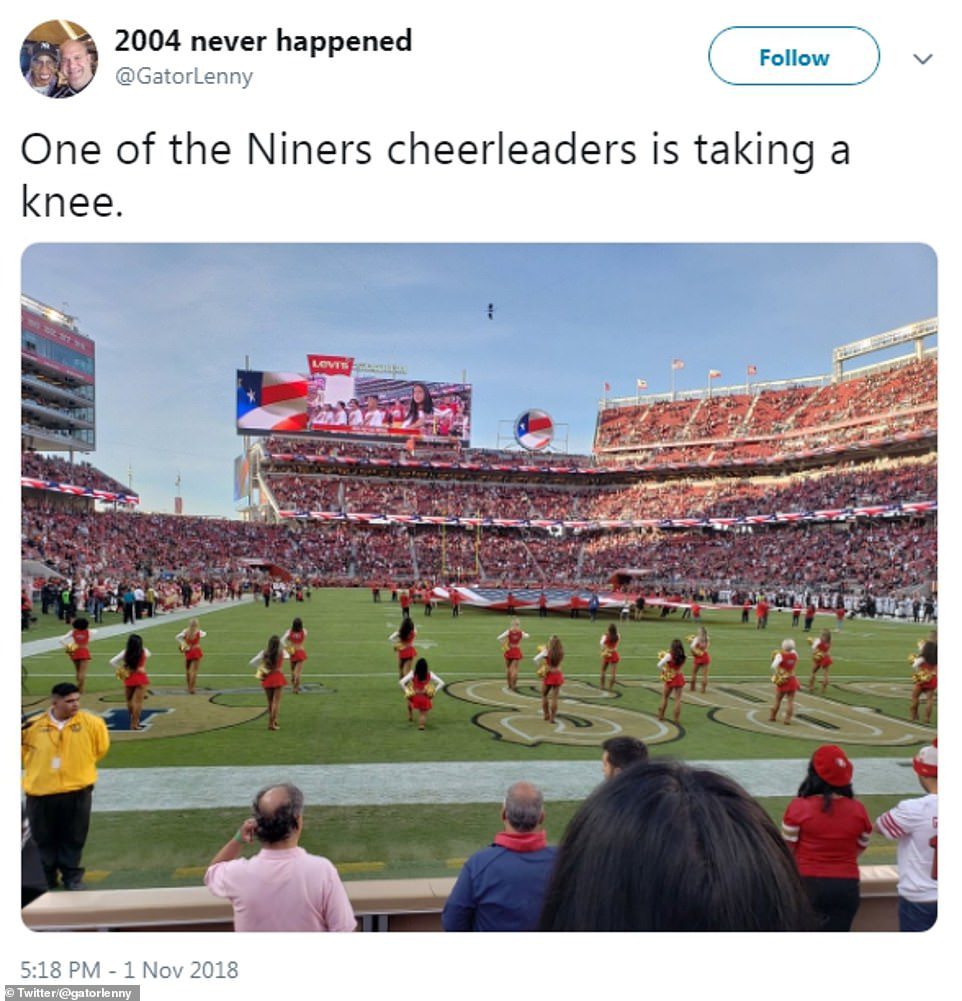 Herold, a Raiders fan who was at the game, took a photo of the moment from the stands. The photo instantly went viral

The moment was posted on Twitter by 49ers fan Lenny Herold where it went viral racking up 11,000 retweets and 50,000 likes.

Although she hasn’t spoken out yet, friends and family are standing behind Morris, who is from Antioch and has been a cheerleader with the Gold Rush for two years, according to Kron4.

But Twitter users had plenty to say on the cheerleader’s act of defiance. 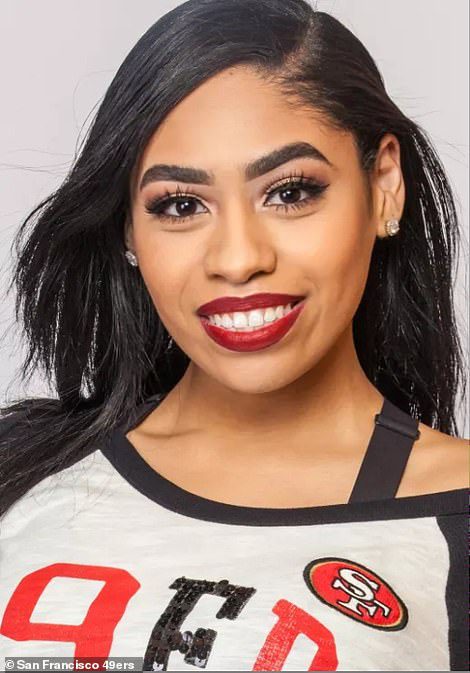 Morris (pictured) was identified by DailyMail.com on Thursday

‘FIRE HER!!! Tell her to MOVE TO THE COUNTRY OF HER CHOICE,’ an angry user named Keith N said.

‘This girl just wanted her five minutes of fame and all of you are giving it to her,’ another user said, accusing Morris of trying to cash in on fame.

‘As some below said, she can do what she wants and so can I, that’s why I stopped watching sports a few years back. You wanna take a knee, then see how it feels when the NFL stands for No Fans Left. Unemployment for you,’ Twitter user Bill Gardner said.

Still, there were some fans that supported her.

‘As a combat vet, I support her right to do this,’ Twitter user Joshua Minshew said.

‘Good for her if she felt the need. She’ll probably get fired, not that the NFL compensates cheerleaders adequately anyway. At the end of the day, it’s her right of expression, and I’m sure she’s aware of the consequences. I support it,’ one Twitter user said.

‘Replying to @GatorLenny Just watched the clip. I just thought it was peaceful, respectful, Constitutionally-protected free speech. I take my hat off to you, Sir, and to the young lady on the field. #Respect #TakeAKnee,’ another fan added.

‘I think what I love most is that she didn’t just kneel… She knelt like a cheerleader,’ one fan said.

‘I will personally raise hell if she gets fired as a ticket holder. Excellent s***,’ a supportive 49ers fan wrote.

The 49ers declined to comment on the basis that she is not an employee of the team, but rather of the entertainment company, e2k. They did not respond to other inquiries.

Her former teammate, Kayla Rossell, told DailyMail.com: ‘I think it’s an extremely brave and courageous thing to do… and I think it’s been met with love and respect from both the Gold Rush director as well as the team itself, just based on my past experiences there.

‘If I were still cheering, I would support her 100% and am proud to call her a former teammate. I hope and pray the fans give her a similar level of love and support.’

Harsh critics: The photo of Morris taking a kneel went viral racking up over 11,000 retweets and 2,000 comments – many users calling for her to be fired for her protest

Admiration: Other Twitter users praised her for her protest, even a combat veteran said ‘I support her right to do this’

‘I take my hat off to you’: Many Twitter users praised her but acknowledged that the knee may jeopardize her career

While some fans praised her for supporting the Black Lives Matter movement, others said the knee protest has led to a declining number of NFL fans

The official website for the 49ers states that Morris has been a member of the Gold Rush cheerleading team for two seasons.

Her biography page says her favorite song is Skywalker by Miguel and Travis Scott and her favorite holiday is Halloween. Her guilty pleasure food is Flamin’ Hot Cheetos and favorite movie, The Wizard of Oz.

A Facebook request for further comment by DailyMail.com to Morris late Friday evening was not immediately returned.

While Morris’ kneel sparked controversy on the internet, she’s not the first cheerleader to take a knee.

Two 49ers cheerleaders took a knee during the anthem before their game against the Jacksonville Jaguars last year.

The ‘take a knee’ protests began in the NFL in 2016, when former 49ers quarterback Colin Kaepernick sat and later knelt during the anthem before preseason games to silently and peacefully protest racial inequality and police brutality in the U.S.

The NFL announced a fix in May that would have required players to either stand or stay in the locker room during the anthem, but that has been put on hold as the league and players’ union negotiates a compromise.

ESPN reported in September that a resolution is not expected this season.

Throughout the last few seasons, the protest spread as more NFL players and some in other sports kneeled during the anthem.

Kaepernick said the protest was sparked by the needless deaths of African Americans at the hands of police, which were also being highlighted by the Black Lives Matter movement that began in 2013.

During a post-game interview on August 26, 2016, Kaepernick said: ‘I am not going to stand up to show pride in a flag for a country that oppresses black people and people of color. 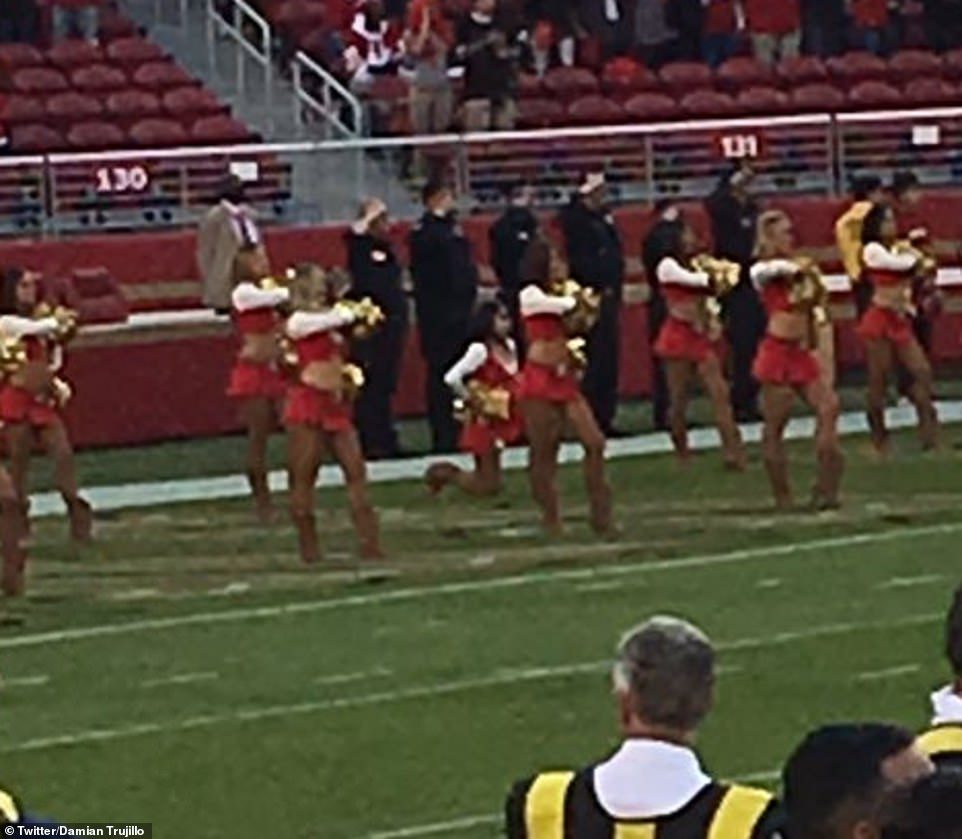 The official website for the 49ers states that Morris (seen above on Facebook) has been a member of the Gold Rush team for two seasons. Her biography page says her favorite song is Skywalker by Miguel and Travis Scott and her favorite holiday is Halloween

‘To me, this is bigger than football and it would be selfish on my part to look the other way. There are bodies in the street and people getting paid leave and getting away with murder.’

On September 24, 2017, more than 200 players sat or knelt during the anthem in response to President Trump calling on owners to ‘fire’ players who took part.

Kaepernick has not played in the NFL since 2016 and is currently fighting a collusion case against the league for blocking him out.

The peaceful gesture has infuriated some conservatives, particularly Trump and Vice President Mike Pence who walked out of an NFL game in Indiana on October 8, 2017, after several players refused to stand. 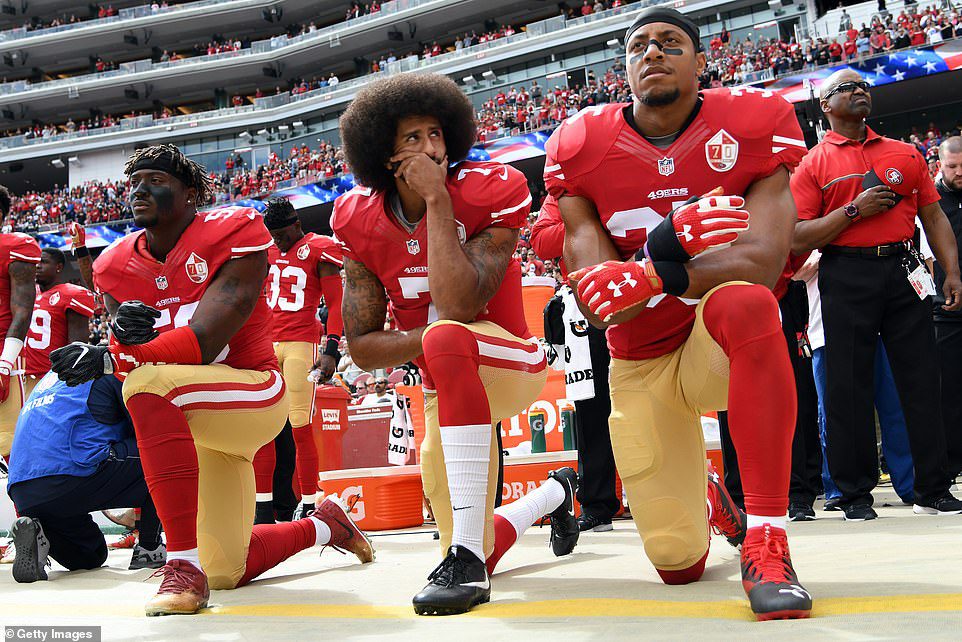 Eli Harold #58, Colin Kaepernick #7 and Eric Reid #35 of the San Francisco 49ers kneel on the sideline during the anthem prior to the game against the Dallas Cowboys at Levi’s Stadium on October 2, 2016